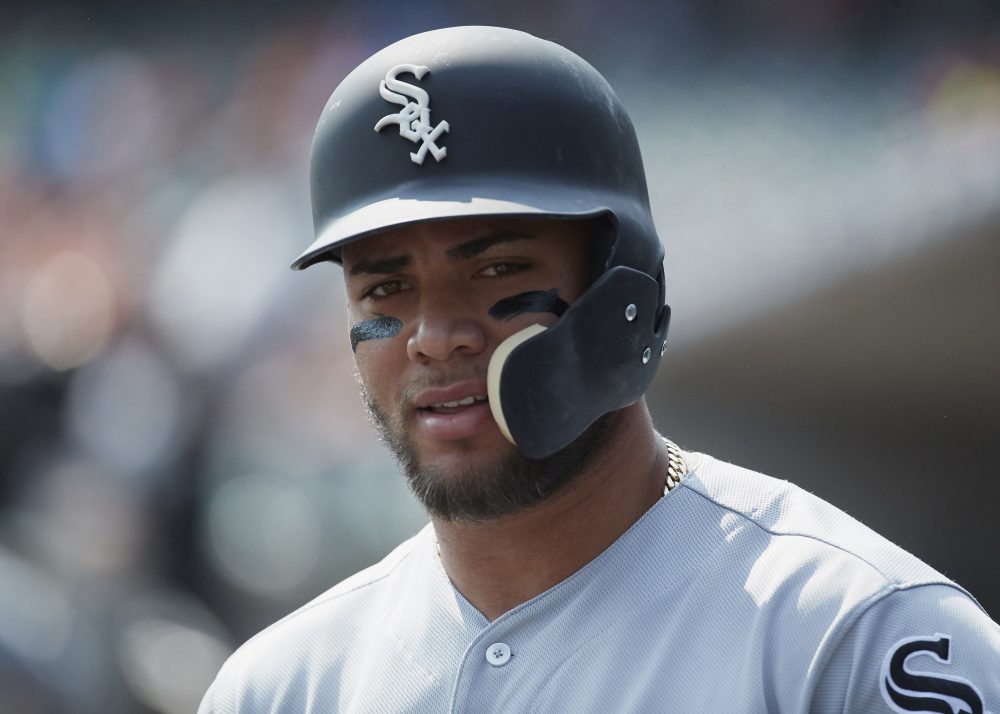 Nick Schaefer: This season represents Year 2 of The Rebuild, and the White Sox have by and large already picked the collection of talent with which they are going to ride for the foreseeable future.  So while 2017 was largely spent wondering if, when, and for what players like Jose Quintana and David Robertson would be traded, 2018 is a year of consolidation and monitoring the guys who already started arriving in the majors at the end of last year.

Do you think the biggest breakout comes from the guys who burned their rookie eligibility last year? I’m thinking of Lucas Giolito, Reynaldo Lopez, and Yoan Moncada. Or do you see some fast-moving elite prospect from the high minors like Michael Kopech or Eloy Jimenez stealing their thunder?

Collin Whitchurch: Moncada and Giolito are so 2017. It’s all about Kopech and Jimenez, baby!

It’s kind of funny how our minds work when following rebuilding teams like the White Sox. Last year, Moncada couldn’t so much as sneeze without someone writing a story about it. I spent a week with the team in Glendale, Ariz., and every day a new writer would show up to pen their Moncada article. This year? Been there, done that, and all eyes are instead on the likes of Kopech, Jimenez, and Luis Robert.

The development of that trio and others remains important, of course, but the thing to watch in 2018 is going to be the continued progression of guys like Moncada, Giolito, and Lopez. That trio—and a few others—showing they can be legitimate contributors over the course of a full season will dictate how successful the season is for the White Sox, regardless of wins and losses.

Schaefer: Going a step further, Tim Anderson and Carlos Rodon are still crucial players for the timing and shape of the next winning White Sox team, but they too are somehow “old news” at this point. Unfortunately, it looks like another year of Rodon missing the first few months with an injury, although at least this year—as he’s remarked himself—he’s coming off of a surgery for a specific diagnosis and treatment rather than vague pain issues.

One of the underrated things about a rebuild is the opportunity to give a bunch of playing time to marginal guys who suddenly turn out to be more than you thought. Sure, it was nice the Astros got Alex Bregman out of their, uh, calculated losing, but Dallas Keuchel and Jose Altuve were marginal prospects who emerged as stars simply because Houston didn’t have any reason not to play them. Nick Delmonico might be that type of guy (even if not to that level). Is there anyone else here you think could be that type of player?

Whitchurch: None as handsome as Nicky Hollywood, no. But there are still a good number of players on the roster who qualify as “young-ish dudes who wouldn’t garner significant playing time for a would-be contender,” such as Adam Engel, Matt Davidson, and Yolmer Sanchez. It’s hard to get too excited about any of them, though.

Engel has plus-defense and plus-baserunning potential, but posted a .517 OPS in 336 plate appearances last year, and his minor-league track record doesn’t exactly suggest he should do better than that. Davidson is good for dingers, but he got on base at a .260 clip last season and might not be more than a 1B/DH long term.

Then there’s Sanchez. The 25-year-old has already proved versatile on defense, able to capably handle second base, shortstop, or third base, but last year he added league-average offensive skills, posting a 94 wRC+ in 531 plate appearances. Nobody will ever mistake him for a star, but defensive versatility and a bat that won’t kill you ain’t nothin, ya know?

Enough about the dudes nobody’s ever heard of, though. When are we going to see Kopech and Jimenez in Chicago?!

Schaefer: Normally, I’d pick the pitcher to move more quickly. If you have good stuff and you know how to use it, that’s a whole lot of the job description. Hitters, by contrast, need to see a whole lot of different stuff, and even if they’ve succeeded at a level, you don’t necessarily want to jump them up immediately.

Then again, Eloy is not normal. Given how little time he had above High-A last year, I’d think you’d start him at least in Double-A or Triple-A, but he could really force the issue a la Rafael Devers in Boston and earn a call-up later on in the summer. But even then, the Red Sox were in a playoff race and had a huge Devers-shaped need.

Kopech did reach Triple-A last season, but he was only able to limit the walks in his last 50 innings or so, and I will be curious to see whether he can sustain that or if it comes in fits and bursts. Chris Sale was broken into the majors as a reliever for the White Sox, but I’m not sure they want to do that here, as that was on a would-be contender.

Whitchurch: Honestly, that seems a little on the nose, particularly in the home run and stolen base departments. The optimist in me thinks he can improve his average and on-base percentage, but it does worry me that it took a .325 BABIP a year ago for him to post a .231 batting average. The fact that he controls the strike zone so well—his out-of-zone swing rate was 27 percent, better than league average—has me confident he’ll continue to grow into an above-average hitter even if his profile is always going to have a good amount of swing-and-miss in it.

Moncada and Anderson are probably going to be the up-the-middle tandem in Chicago for a while, and while there are a few red flags with both players, the kind of potential both have shown at times is tantalizing enough to dream on. In general, the White Sox have enough young talent that you can play the “what if everything breaks right?” game and envision a scenario in which the White Sox wind up in the playoff race a year sooner than anyone expected.

What would need to happen for that to be possible? What if Moncada and Anderson are awesome? What if Giolito is an ace and Lopez proves he belongs in the rotation? What if Delmonico and Sanchez play waaaaay better than anyone anticipates? What if James Shields doesn’t suck?

Schaefer: The limiting reagent for this team is the rotation. I think they have enough competent filler to have a solid offense even if, say, Moncada is only what PECOTA projects and not more, for example, and if Avisail Garcia regresses to mediocre. But with Rodon missing a good chunk of the season again, you’re still getting a lot of innings from Shields. And while Giolito and Lopez give reason for optimism, Miguel Gonzalez is fine and there’s help on the way, there’s non-zero potential for this to be a disaster.

So the most realistic option, in my opinion, is if Rodon is 100 percent upon his return and continues developing, Lopez and Giolito are both good, Moncada breaks out, and the rest of the team … well, holds serve, I suppose.

This offseason we were expecting about what happened—stand pat, because you have a million young players you want to develop and audition. But, especially given how this offseason shook out, should they have done something differently? They could’ve signed Lance Lynn and Alex Cobb, and traded for Jake Odorizzi, and had a Rotation of OK Guys!

Whitchurch: It’s not all that difficult to find a path to the second Wild Card spot. Behind Houston, Boston, New York, and Cleveland, there’s a whooooole lot of “meh” across the AL. But I also get why the White Sox wouldn’t stray from their long-term plan in an attempt to get there, even if loading up on elite prospects isn’t a foolproof path to a long and successful contention cycle.

But the White Sox do seem to be close, with Kopech and Jimenez arriving as soon as this summer, and so long as guys like Alec Hansen, Dane Dunning, and Zack Collins continue to develop as they hope, it’s easy and fun to concoct future lineups and future rotations out of the assembled mass of high-end talent. Jake Burger losing a year of development because of a torn Achilles’ tendon sucks, but not every prospect is going to pan out. And the more lottery tickets you purchase, the better chance you have of hitting the jackpot. *gets dragged away by the cliché police*

Schaefer: Agreed. Manny Machado and Bryce Harper get all the ink for this coming offseason, but there are also intriguing free agents like Josh Donaldson, Charlie Blackmon, and A.J. Pollock who might fit needs. To me, you use 2018 to sort through what you have and give playing time to potential future regulars and stars before you try to patch holes. I also think Giolito and Lopez can beat their PECOTA projections, giving the White Sox’s pitching development team the benefit of the doubt based on its track record, and if they do contention might not be far away at all. While all sports fandom is “wait and see” in some form, by this time next year we’ll have a much clearer picture of who’s a key piece moving forward and where they need upgrades.

Whitchurch: Not surprisingly, we’ve spent a good chunk of this “2018 preview” talking about years beyond this one. PECOTA has the White Sox winning 72 games this season, a five-win improvement from a year ago. That seems reasonable, no? Given the precarious nature of their starting rotation, something closer to last year’s win total, maybe 68 or 69 wins, wouldn’t be unfathomable, nor would it be a travesty for a rebuilding team. But you could also talk me into some modest gains where the White Sox jump up to 77-78 wins. Not quite playoff contenders, but also not among the worst in the league. It’s also possible that, given what the Tigers and Royals are doing, they’re the third-best team in the AL Central but also the third- or fourth-worst team in the American League.

Schaefer: They did have a good chunk of very good players in the first half of last year, like Jose Quintana and their very good bullpen, so they may be worse pre-break now. But as pessimistic as I am, it’s hard to assume none of their young guys will improve as the season goes along. There’s room for more relievers to get flipped at this deadline, and maybe even Avisail Garcia or Jose Abreu as well, but I’ll go over on that PECOTA number. The second tier of teams, like the Twins and the Angels, feasted on the weird offseason, but I’ll bet on some breakouts among the young dudes. Maybe baseball will be weird in a good way for the White Sox this year.