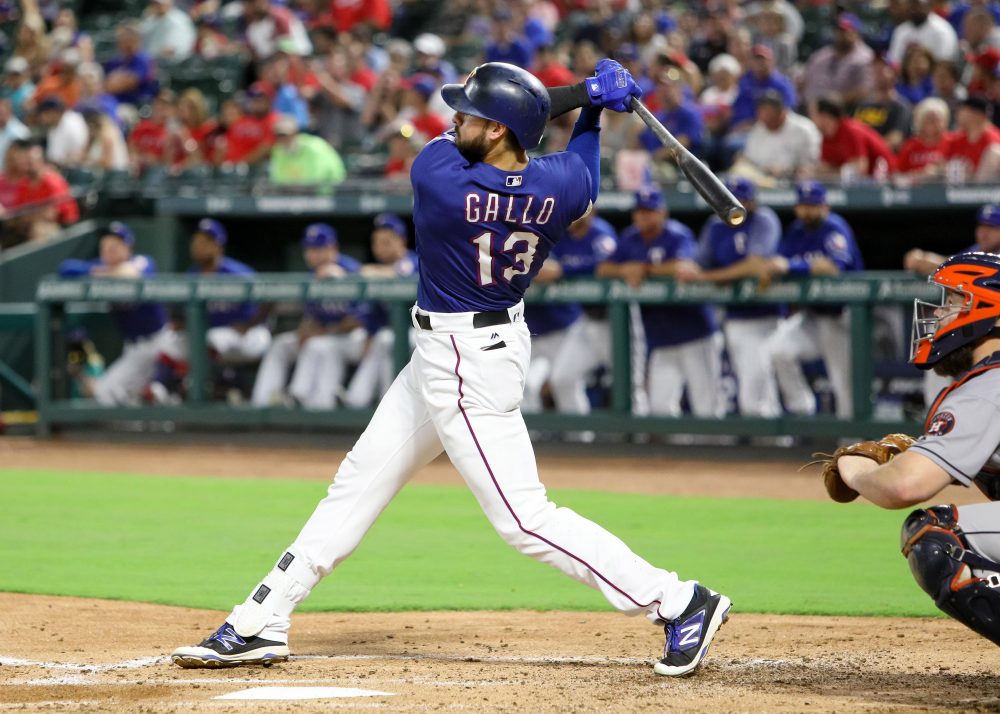 Mike Gianella: And Bartolo Colon! It’s like the Rangers decided to have a “turn back the clock night” for realsies.

Carleton: I’m old enough to remember a few years ago when it looked like the Rangers were going to be the most interesting team of the next five years. There was legitimate worry about how they would get Rougned Odor, Elvis Andrus, and Jurickson Profar on the field at the same time, especially with Ian Kinsler and Adrian Beltre around. They were young, they were talented, and the future looked so bright, and that was after two consecutive World Series appearances.

It’s weird because now they seem to have settled into post-apocalyptic mediocrity. There was the “everyone got hurt” year and then there was 76-86 last year, and now PECOTA says 76-86 this year.

Gianella: That’s an apt description. In an era when teams either seem to be going for broke or retooling for years the Rangers are straddling the fence. They didn’t lose any free agents of consequence, but they didn’t make any significant additions either. The lineup looks like a strength, but this is more perception than reality; Texas finished 25th in True Average in 2017. A full year out of Beltre and a bounce-back campaign from Odor would go a long way, but these types of “what ifs” exist for nearly every team.

Carleton: Surely Yu jest about not losing any free agents of consequence. (Yeah, technically he was a Dodger, but still.)

Gianella: If I forgot about Yu Darvish, it’s only because I’m following the Rangers’ lead with pursuing pitching this winter. Texas opted for quantity over quality, eschewing Darvish and Jake Arrieta and throwing a bunch of stuff at the proverbial wall to see what sticks. I’m fascinated by the Mike Minor experiment, but the rest of the non-Cole Hamels members of the staff are a bunch of retreads. Doug Fister and Matt Moore are going to eat a lot of innings if they stay healthy, but unless Andrew Cashner left his magic jar of ERA pixie dust in his old locker, it’s going to get ugly very quickly.

Carleton: I’m trying to figure out what the hook is, either for Rangers fans or people like me who are just clicking around on MLB.tv. Why should I bother watching a Rangers game? They’re not going to be horribly bad. They’re not going to be all that good. And Twitter will have the GIFs of whatever happy thing Joey Gallo’s bat did to the ball. So, why be invested?

Gianella: In a perfect world for Rangers fans, Delino DeShields steals 50 bases, Nomar Mazara finally lives up to the prospect hype, and Willie Calhoun does things with his bat that give me a gooey feeling in the pit of my stomach. But you’re right. While the Rangers aren’t going to be the sad sacks of the American League, they don’t have a hook that screams out to the casual fan looking for something to watch on any given night. Then again, that’s the “problem” with baseball. There aren’t 30 Mike Trouts or Jose Altuves to go around.

Carleton: Oh, what have we become when a team is un-watchable because they’re not on pace to lose 100 games?

Gianella: Perhaps we’re both being too dour about the Rangers’ chances. In the pre-tanking days, the concept behind a team like the Rangers was, hey, maybe a few things break right and suddenly they’re in the Wild Card hunt. Maybe Hamels pitches like an ace, Beltre is Beltre for 550 plate appearances, and Shin-Soo Choo stays healthy enough that his ridiculously good on-base percentage matters. Maybe the Alex Claudio/Keone Kela/Jake Diekman bullpen coalesces and Matt Bush becomes the next great multi-inning super reliever. I know. Three dollars and a bunch of maybes will buy you a cup of coffee.

And are the teams we expect to lose 100 games watchable? Lewis Brinson could be a great player for the Marlins someday. Lewis Brinson isn’t the kind of player who will compel me to cancel my Friday night plans because the Marlins are on TV.

Carleton: Well then maybe MLB needs a team like the Rangers to have a surprise good season. The narrative right now is that tanking is the way to the top, and a team that wasn’t fancied in the preseason catching some lucky breaks and maybe Mazara hitting 40 homers and winning a playoff series or three. Maybe the “always looking three years down the road” fever will break across the league, and rebuilding will go back to being something that teams only did as a last resort.

Gianella: I doubt it, although it’s a nice idea. I grew up fueled by the rags-to-riches fever dream of the 1969 Miracle Mets, so it is relatable. It’s more difficult now for a team to rise out of mediocrity and make the playoffs, and the idea of a team going from 65 wins to the World Series feels like a museum piece. The Rangers are a poor candidate for this in any event. A team with young, promising pitching is the kind of squad I’d go to Vegas and bet on, and the Rangers aren’t that team. Still, if the Rangers could defy the odds and kind of become an AL version of the Rockies and feast enough on their offense to win it would be fun.

Carleton: So, Hamels spends September of 2018 with the …

Gianella: … Phillies. They’re going to be the second NL Wild Card this year. They’re already paying some of his contract.

Carleton: But wait a minute. PECOTA says that the Phillies are a .500 team. It doesn’t quite like the Rangers that much, but if we’re fawning over the Phillies, then why not the Rangers?

Gianella: It’s the difference between Aaron Nola and Jake Arrieta and Cole Hamels and Mike Minor.

Gianella: It’s a matter of timing. The Phillies have a young offensive core that is ready now and very few veterans on the bad side of the age curve. The Rangers have Beltre and Choo and others who aren’t going to be around the next time the team is great. Even most of the team’s prospects outside of Calhoun and Ronald Guzman aren’t expected to make an impact any earlier than 2019.

Carleton: Hmm. Odor, Mazara, DeShields, and Gallo are all under 25. I guess the dividing line between the Rangers and the Phillies is the sins of the past with some of those very unfortunate contracts still being on the books. Who would have thought that Choo might be the nexus of the universe?

Gianella: To return to an earlier point, the Rangers are straddling the fence. They haven’t quite committed to a rebuild but they didn’t go all in either. The plan seems to be a wait-and-see approach for the next wave of prospects. Like every contender, they’re going to need some arms to emerge and the better prospects Texas has on the pitching side are a year away, at least. So I’m guessing the Rangers see this is a transitional season, as opposed to Year 1 of a 3-4 year rebuild.

Carleton: Are they transitioning into Year 1 of the rebuild? (What’s the point of that?) Or are they figuring that it’s around the corner anyway, so they might as well try their luck this year with what they have? Or maybe they’re just trying to put on a good show for the good people of the Dallas/Fort Worth area?

It’s weird because a team preview which was “well, they won’t be great, but things won’t be awful” used to be taken for what it was, lukewarm news. Now, it’s almost more anxiety provoking than anything else. I’m already planning out a Hamels trade for them in my head and the games haven’t even started.

Gianella: As you pointed out, there are a few players who are past their prime but enough of a core where a complete tear down isn’t necessary. But a team never wants to get stuck in a position where they wait too long and keep trying to catch that lightning in a bottle every year. The result is the 2017 Tigers. Smarter minds than mine were clamoring for Detroit to rebuild for at least two seasons. They’re doing it now but are saddled with players attached to contracts that aren’t movable. There’s enough of a core in Texas that could make a playoff push feasible, but I can see why they didn’t want to bring in more high-priced free agents to win 83-85 games.

Carleton: So the reason I should watch the Rangers this year is to see Joey Gallo do indecent things to baseballs?

Gianella: That’s why I’ll be watching.