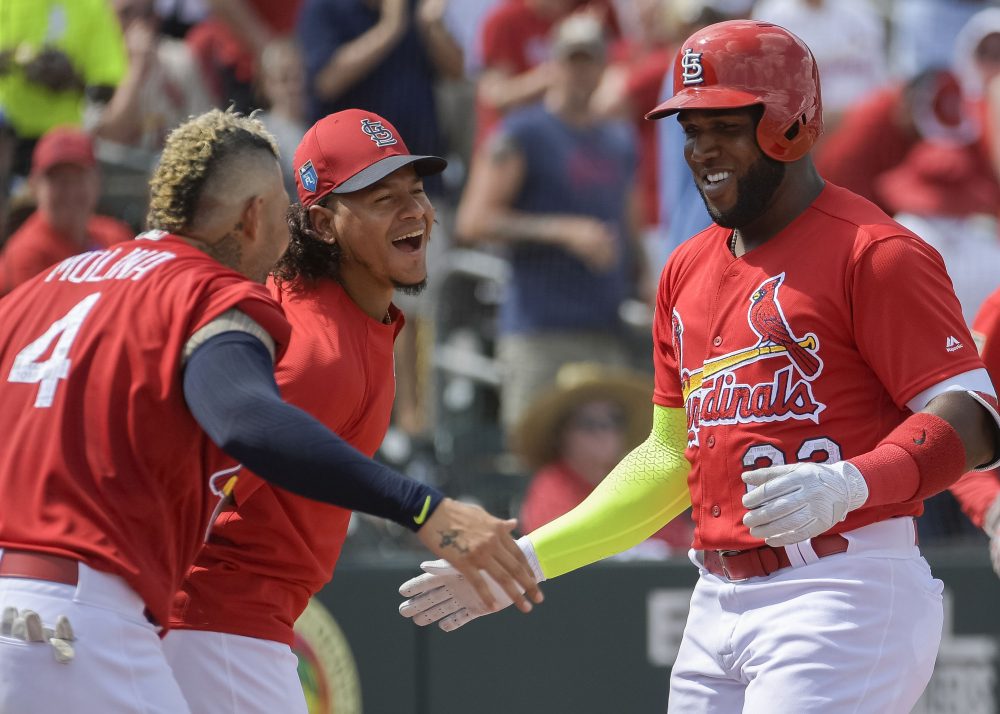 Zach Crizer: Well, it’s an interesting time to be the Cardinals. They’re only a couple years removed from total division dominance, but their estrangement from the crown feels much longer. Much of that owes to the Cubs’ golden era. More recently, the Brewers’ upstart 2017 run made the NL Central feel even more claustrophobic, and Milwaukee’s offseason signals an intent to compete at the top. The Cardinals, of course, also showed a strong intention to reclaim their mantle as perennial postseason fixtures. So, do you think the Marcell Ozuna-headlined offseason was a satisfactory salve for the Cardinals’ status anxiety?

Matthew Trueblood: I think they fell ass-backward into the perfect acquisition. They did their damnedest to lure Giancarlo Stanton, but given what their owners are (and aren’t) willing to spend, and given the risks Stanton presents and the team’s competitive window, they’re much better off with Ozuna. Of course, they also got very lucky, in that the Marlins were willing to do what amounts to a swap of a dollar bill for four dimes.

They sure could have been more aggressive in the pitching market. The bullpen looks thin. The rotation’s depth and upside look better now than they did when camp opened, given what we’ve seen from Luke Weaver, but it’s not without risk. Their offseason began with bluster, a certain promise of big things coming, and then it turned out to be just the one big thing. I think they were afraid to get out over their skis—reluctant to bet too big on this middle-aged, not-quite-elite core.

Crizer: Right, they did their best to consolidate some useful but middling pieces into star power. Maybe they didn’t get quite as far as they would have liked, so they’re left with a well-stocked team—especially on the offensive side—but relatively few good bets to compete for an MVP, let’s say. Tommy Pham has earned plenty of optimism, but it’s awfully hard to take another 5.5 WARP to the bank (Tommy: If you’re reading this, I believe, please don’t make me a motivational tweet.). The same is sort of true for Ozuna, even if his path has been more conventional.

Beyond some of those stars, you run into huge positional battles that give you reason to think they will find a good answer, but it’s not entirely clear what it will be yet at the infield corners, nor at the back of the rotation or in the bullpen.

Between Weaver, Michael Wacha, Alex Reyes, Miles Mikolas, Jack Flaherty, and on and on, do you have thoughts on how you expect the Cardinals’ rotation to shake out? Any breakout stars among that group?

Trueblood: My first observation about that set isn’t that any individual is likely to be top-shelf this year, but the impressive upside they provide in aggregate. That said, Reyes seems likely to slot into a relief role for this year. Wacha may have solved some of his reverse-split problems, but I don’t think he’s solved his times-through-the-order problem. New pitching coach Mike Maddux’s presence is going to be huge for this team. Derek Lilliquist was, to put it baldly, underqualified and overmatched in his first shot at an MLB pitching coach gig. Maddux will exert more influence on manager Mike Matheny and help him get the most out of Wacha, Reyes, and Mikolas through usage patterns.

Weaver stands out as the guy who could jump into a front-line, workhorse role, though. I love his athleticism, his intellect, his poise, and his changeup. And he’s added velocity over the last year or so, hitting 98 mph this spring.

There are so many guys who give us chances to flex our punditry muscles here. Pham, Matt Carpenter, Jedd Gyorko, Paul DeJong, Kolten Wong, and Jose Martinez all invite you to take a stand, in a way. Do you have an especially strong feeling that any of them will see their level move much, in either direction?

Crizer: Well, I share the commonly held belief that Martinez has earned a shot at some more playing time, at the very least, and I would be interested to see how Wong progresses after another long year trying to prove himself to the crotchety Matheny. But I actually want to talk about DeJong for a second. Everybody has built regression into their understanding of him because—cover the eyes of the children!—those plate discipline numbers are bad. And that’s the safe way to view things, but I think his batted ball mix is Daniel Murphy-esque. His extreme air-ball tendencies and high-quality contact would appear to provide a decently high floor.

Another way to think about the recently extended DeJong: His minuscule walk rate (4.7 percent last year) could be amplified by his newfound reputation as a power hitter of some repute. If he can take just a small step forward there, you’re talking about last year’s Chris Taylor season with a few more homers and a couple fewer steals. Not to get too caught up in the comps here, but suffice it to say, I think DeJong gets pigeonholed by a couple numbers that perhaps don’t do justice to everything else he does. If he can stick at shortstop, I’d be happy to have him locked up in my lineup.

Did you have your eye on anyone else in that group?.

Trueblood: I’m not as sanguine on Martinez (platoon exposure, age) as some, by the way, but I mostly agree about DeJong. If people want my opinion on him, I just wrote about him last week.

Wong. If he repeats (or even approximates) that .376 on-base percentage and stays healthy, this lineup is scarily deep. He’s really honed his approach, and with his speed he can beat teams in a number of ways. The depth of this team—from the top of the lineup to the bottom, from the core talents to the bench, from the majors to the minors—is deeply impressive.

Everywhere but the bullpen. Right? I mean I’m not just looking right past it, right? This relief corps might have passed muster in the late ‘90s (though the sleepy octogenarian bullpen coach would have wondered why there were so damn many men under his charge), they’re not without some matchup value, a few of them threaten to hit 100 miles per hour, but by 2018 standards, they stink. They just … they stink, Zach.

Crizer: They are certainly, um, uncertain. I don’t think the bullpen is devoid of talent, comparatively, but it is hard to figure out what the best configuration of these pieces will be in, say, May. Or, more importantly, in September. And while the addition of Maddux adds some hope, do we trust Matheny to shift course appropriately if (when?) Dominic Leone proves himself to be the most effective arm?

I’m pretty confident they missed the career-years on Brett Cecil and closer-elect Luke Gregerson. Ditto Bud Norris. But, I think Leone is good! Tyler Lyons has shown some strong skills and seems fine as a setup option. Combine those guys with whoever ends up in the pen as rotation overflow, and I think it could be a league average-ish group. Don’t ask me how well it will be deployed in the highest leverage moments, though.

Speaking of September, it’s probably time to address the elephant in the room: How does this team stack up in the invigorated NL Central and Wild Card races? PECOTA currently projects them for 85 wins, second in the division and good enough for the second Wild Card spot.

What they have going for them is a solid, high floor. Lots of teams could go lots of directions, but we can be almost annoyingly confident that the Cardinals will get those 85 wins or at least approach them. They have upside in the forms of Pham and Ozuna, who could combine for far more than the 3.7 WARP they are currently given by PECOTA. And for this season, that combination may very well get them a Wild Card spot.

I’m curious whether you see them as one of the two most likely Wild Card winners. But more importantly: Is this a club trying to contend as is? Or is the current group a prologue to a huge play for Josh Donaldson or Manny Machado?

Trueblood: I’m a believer in this team, on the whole. I foresee close to 90 wins and the chance to host the Wild Card game. You’re right that their floor is exceptionally high. I also think there’s enough upside to assuage even my concerns about the bullpen. We’ve mentioned the lineup depth, and the possible dynamism of the rotation. I also think, at least on days when the infield goes Gyorko-DeJong-Wong-Carpenter, that they’ll play really good defense. I mistrust Matheny enough to want to hedge, but I see a playoff team. What’s your feeling?

Crizer: It’s hard to find too many things to bet against, you’re right. Really the only thing I can see derailing them from that postseason berth is a pair of higher-volatility teams hitting everything just right and usurping their Wild Card position. Or maybe the pitching having a series of unfortunate turns for the worse. But overall, yes, the Cardinals have to be considered Wild Card favorites, and perhaps players to add even more of that star power they were looking for this winter.

You need to be logged in to comment. Login or Subscribe
CountryHardBall
No mention of Fowler?
Reply to CountryHardBall
gandriole
Nor Yadi!
Reply to gandriole
Tim Angell
Thanks, guys! As a Redbirds fan, I view your comments is pretty balanced. I'll be happy to make the Wild Card play-in game. I'm glad you noted the Cards have some pieces avaialble for trade to rent a free agent to be, especially if, as I suspect, the NL Central may be a three-way dance for the division crown. I expect Milwaukee, the Cubs, and St. Louis to be closer than most experts think.
Reply to Tim
Tim Angell
Sorry for the typos above - yikes!
Reply to Tim