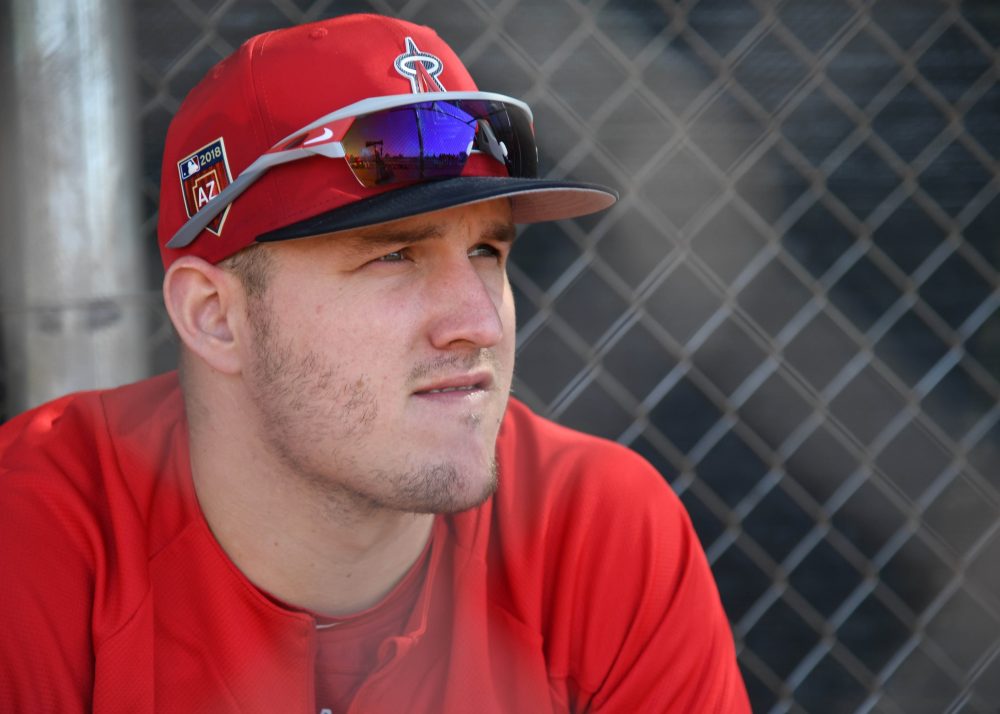 Bret Sayre: For a few years now, the Angels have built boring teams around Mike Trout. This is definitely not a boring team. PECOTA doesn’t think it’s a particularly great team, but then again, PECOTA didn’t have to watch the 2016 Angels.

Mark Barry: I moved to L.A. during last season, and the Dodgers’ games were all blacked out on television. I caught my fair share of the Angels. They were (be polite … be polite … be polite) interesting. I can understand people thinking baseball is boring when your experience consists of sitting around waiting an hour for Trout to hit. That said, I’m kinda, sorta super into this team.

Sayre: Let’s talk about why PECOTA doesn’t like this team as much as public perception might before we start getting into why people are actually watching the games.

Shohei Ohtani is projected for 2.9 pitching WARP in 24 starts. The Angels pitchers projected to make the other 138 starts are expected to accumulate … double-checks spreadsheet … 2.9 WARP. Do you think this is fair? And, if not, to whom is it least fair of the group?

Barry: My immediate inclination is to say Garrett Richards, but then I remember that his arm is being held together with bubble gum and those little swords that spear olives for cocktails. I think we’ve collectively forgotten about Matt Shoemaker, who was really good before taking that line drive to the dome in 2016.

Pitchers get hurt, we get it. But even so, this rotation is just next level injury prone. Would you bet your life (draconian, I know) on any of them hitting 150 innings?

Barry: OK, withdrawn. If I’m taking Shoemaker in the oft-injured Angels pitcher draft, where do you go next? I have a feeling we’re getting a Tyler Skaggs mention here soon.

Sayre: Oh, we’re definitely getting a Skaggs mention. Unfortunately he’s lost some of the upside he carried as a prospect, but we’re now five years into the experience and he’s still just 26. The schedule he faced during the last two months of the 2017 season, once he came back from injury, was extremely difficult. But we’re now getting into a sad rabbit hole. Before you know it, we’ll start fawning over what Andrew Heaney might have been.

So let’s go to the offense. Who will be their third-best hitter, next to Trout and Justin Upton?

Barry: Surprisingly enough, I think it’s Zack Cozart. He improved dramatically last season, nearly doubling his career walk rate while slashing .297/.385/.548. There will probably be some regression (because obviously), and he likely won’t match his 24-dinger output outside of the launching pad in Cincinnati, but if the new approach sticks, he’ll have a really high floor moving forward.

Was that a hot take? I can’t tell. Do you buy his All-Star season or would you look elsewhere for the Bosh to Trout and Upton’s LeBron and Wade?

Sayre: I’m buying Cozart, although more from a power perspective than an AVG/OBP perspective. He ran his fly-ball rate up and dropped his strikeout rate down in the second half of last year, which allowed him to put an exclamation point on his breakout season. That said, he is moving from the National League to the American League, and that could cause him to have an adjustment period (not to mention the less attractive home park).

The darkhorse for me to sneak up into that spot is Luis Valbuena, though. He’s been utterly forgotten in all of the addition talk, but C.J. Cron’s departure gives him a straight shot at the good side of a platoon at first base and he hit 19 homers with a .774 OPS during the final four months of the season. He may be a low-BABIP player in general due to the fact that he’s generally aiming for the heavens when he cocks back, but .210 was a bridge too far. A more equitable season on balls in play could see him vault back up into the middle of their lineup.

Before we get to our next topic, let’s take a slight detour with a fun game I just made up. It’s called What Would Mike Trout Have To Do To Surprise You In 2018? We can rapid fire through a couple of statistical categories. First up, home runs. What number could he hit that would truly surprise you?

Barry: I like games. I like fun. The first number that jumped out in my mind was 50, but now I’m waffling. Let’s say 55. Fifty-five homers.

Sayre: OK, that’s a lot of home runs. What about batting average?

Barry: The answer is probably anything low, but that’s not as fun. Maybe .350? Is that high enough?

Sayre: All right, last one. Total WARP for the season?

Speaking of a guy who has eclipsed the double-digit mark several times in his career, can we talk about Albert Pujols for a minute? He’s been ravaged by lower-body injuries, sure, but 2017 was rough. Evidently he’s lost some weight and is in The Best Shape of His Life(™) entering this season, but do you think there’s another above-average season left in the tank? Or are we looking at the slow, dark descent into nothingness that won’t end until 2021 (sometimes I can get dramatic)?

Sayre: This part of Pujols’ career is basically like the fourth level of the dungeons underneath the Red Keep, in that it’s far better to view this version of him in darkness because it’s filled with things you just would not want to see. He’ll probably rack up 400 at-bats and he’ll probably continue to be a shell of himself and put up a sub-.750 OPS during the time he is able to stay healthy. The more pressing question for the Angels from a roster construction standpoint is whether he can actually play first base against lefties. He’s slid from 95 games in the field to 28 to just six in the last three years. In the end, it’s likely to be a spot they look to upgrade as the season goes on.

Now, unfortunately while their farm system has gotten better overall, it’s filled with 2020-and-beyond ETAs. In fact, the only player on their top 10 list this year with a 2018 in that line was Michael Hermosillo, and he is a tough profile anywhere but center field—which, in case you’ve been living under three stories of rocks, is taken already. So any improvement is likely going to have to come on the trade market, which leads naturally into our next question: What should the Angels have done this offseason that they did not do? And was this a good plan?

Barry: The Angels were fairly (relatively) active this offseason. They completely revamped their infield and made sure to lock up Upton long term. Those are all moves I can get behind. I’m still the captain of the “hey, it’s not my money” team, so I would have liked to see them address their starting rotation even a little more. Despite their splash in free agency, their payroll is almost $13 million lower than it was last season (unless my math is wrong, which it totally could be). With a rotation consisting of more question marks than the Riddler’s costume, it would have been nice to see another move, especially after seeing some of the starter price tags as the offseason has progressed.

I know we’re creeping up on Opening Day, but do you think they have another move left in them? Alex Cobb is still available, so he would obviously make some sense depending on cost. Or would they be better off rolling with some combination of Nick Tropeano, Troy Scribner, Jaime Barria, and your man Parker Bridwell before assessing the trade market in July?

Sayre: My parents taught me never to trust anyone whose first name ends in “er” and can be used as a noun, so don’t you try to put responsibility for Bridwell on me. Cobb really would make so much sense for this team, but so did Lance Lynn and that didn’t happen.

I think that’s more of a pre-tankalicious take though, right? In looking at the 2019 free agent class among starting pitchers, the best arm with an expiring contract who is not already on a team projected to make a serious run at the playoffs is … Nathan Eovaldi? It’s rough out there. Sure, one or two expected contenders will end up being sellers by the late summer, but it’s not a strategy that is reliable in the least. Without them, you have the Chris Archers and Julio Teherans of the world, who would have much more prohibitive trading costs, albeit one the Angels could actually scrap together given their improved farm.

I guess, at least their ragtag bunch goes eight deep. Unlike their lineup. Okay, that was probably uncalled for. With all the upside and all the risk that we’ve talked about it, does it seem right that the Angels are basically projected for it all to come out in the wash and finish as a near-.500 team?

Barry: It’s not hard to squint and see the Angels winning 90 plus games and contending for a Wild Card spot. It’s also not hard to see injuries ravaging their pitching staff and a handful of guys falling back to earth after career-years on offense. I guess that’s a long-winded and roundabout way of saying that the PECOTA projection feels about right.

Where are you at with this Angels team? There’s a clear window with only three more guaranteed years of Trout, and this is definitely their best roster since the the 98-win team of 2014. Can we get all the other teams on the fringes to sit this season out so we can get Trout in the playoffs again? I don’t feel like that’s too much to ask.

Sayre: I think this is the kind of team where the risk is being a little overstated collectively. I mean, it’s not the Mets we’re talking about. The floor of a team with Trout, Upton, and Andrelton Simmons is just so high that even two breaks somewhere (Richards throwing 180 innings, Ohtani pitching as promised, Cozart continuing his 2017 magic, etc.) could push them into strong Wild Card contenders. I’m feeling optimistic about those chances today, so I’ll say I think they get to 88 wins. But I’m sure this will turn into a very Milkshake Duck situation as soon as this is published.

It would be interesting if Lackey was the glue we needed to at the back of the rotation.
Reply to lipitorkid