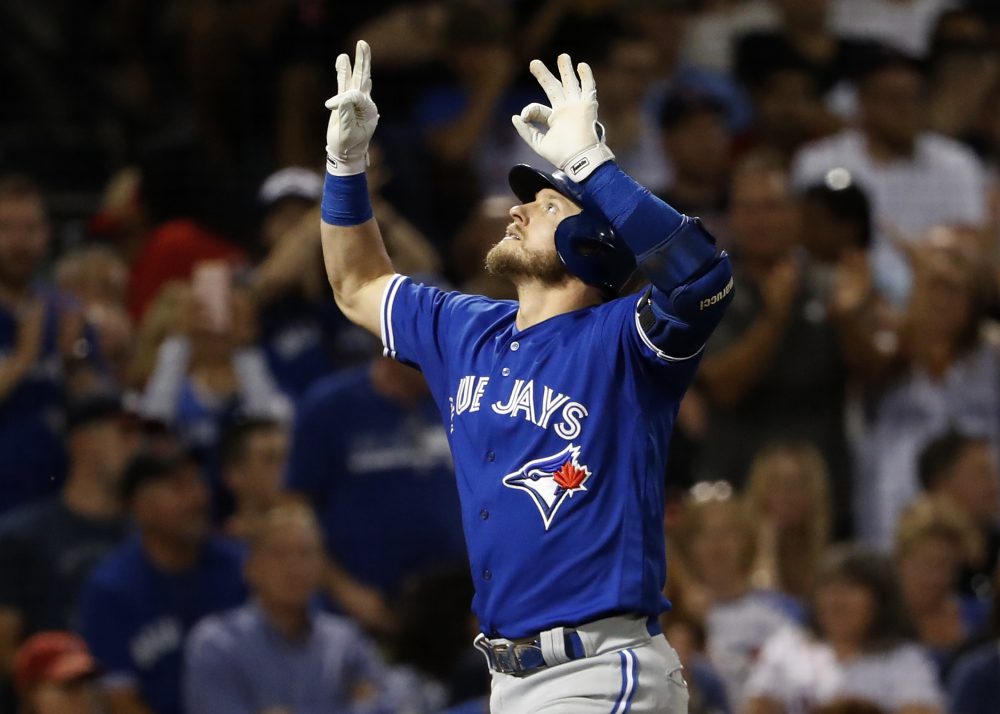 Joshua Howsam: Let’s get the big one out of the way first. PECOTA has the Blue Jays projected for 79 wins and a fourth-place finish in the AL East. What were your first reactions to seeing that number?

Nick Dika: My first thought is that 79-83 is definitely within the band of outcomes for this Blue Jays team. I would be equally unsurprised if they flipped it and went 83-79. The thing with middling teams like the Jays is they are kind of a Rorschach test—you can see what you want to and they can be good or bad depending on if a few breaks go their way. When it comes to other teams it’s not always so hazy: a five-game swing isn’t going to be the difference between the Astros being competitive or not, but it certainly matters to the Blue Jays Jays.

Toronto’s projections seem to be giving a certain oft-injured shortstop a bit of a lifetime achievement award for past performances. Kind of like they did with Al Pacino at the Oscars when he won for Scent of a Woman.

Howsam: That’s definitely true of Mr. Tulowitzki. It’s hard to see him reaching his current 2.3 WARP projection, especially since he hasn’t played an inning of spring training. Overall, though, PECOTA projects them to be a middle-of-the-pack offensive club. That’s hard to quibble with. We’re talking about a team that last year gave an inordinate number of plate appearances to hitters like Ryan Goins, Darwin Barney, Chris Coghlan, and the ghost of Jose Bautista. Replacing that crew with Aledmys Diaz, Yangervis Solarte, Randal Grichuk, and Curtis Granderson goes a long way toward raising the offensive floor. Toss in the positive regression coming from a return to normalcy with runners in scoring position and you get a team that should score 750-775 runs in the current environment.

For the first time in what feels like ages, the Blue Jays actually have a few guys who can play multiple positions. Diaz can play both middle infield spots, Solarte can play anywhere in the infield and even the outfield in a pinch, and Grichuk should be a positive defender in all three outfield spots.

Dika: That versatility is definitely something that had been lacking on recent incarnations of the team. And we shouldn’t forget about the Jays’ crop of young minor-league outfielders (Anthony Alford, Teoscar Hernandez, Dalton Pompey) that can serve as depth in case Granderson hits like he did with the Dodgers or Grichuk can’t tame his strikeout rate. But the real debate for the projections seems to be in the Jays’ pitching staff—they’ve been running with some major FIP beaters for the last several seasons in Marco Estrada, Aaron Sanchez, Marcus Stroman, and J.A. Happ. As Happ and Estrada get older, I wouldn’t be surprised to see their numbers regress—beating FIP seems to be the exception and not the rule. Do you think they can beat their projections as they enter their age-35 and age-34 seasons?

Howsam: Yes, I do. I think you’re very right to mention that focusing on weak contact instead of missing bats is a tough play for the long term, but there are examples of pitchers who have done this for a very long time. I also happen to think the two you just mentioned are types who could be just that. Estrada has a fastball that “rises” more than anybody’s in the PITCHf/x era. The only other pitcher who comes close is Chris Young, a guy who just happened to out-pitch his FIP for nine straight years. Yeah, Young is about a foot taller, but outlier movement is still tough to hit. The same goes for Happ and his vertical movement gap between his two fastballs. That ability to change eye level with two pitches at the same speed with the same release point is really valuable.

All that said, I think you were very right to point to the ages of both of these pitchers. Everything I’m saying is predicated on stuff and command, both of which can wane as players get older. We already saw Estrada just lose his changeup for a six-week stretch last year. He was dealing with personal issues, but we can’t forget that it happened. By the same token, Happ could lose a bit of that feel for his four-seamer and find that a lot more balls are going over the wall instead of over a hitter’s bat. But since Estrada did get his changeup back and Happ has shown no signs of slowing just yet, I will need to see decline happen before I’m willing to project it.

Dika: I’m a little nervous about Happ and Estrada because any pitcher who hits his mid-30s is likely going to see some age-related decline no matter what. But unless they fall off a cliff, I do think they can be solid. I think it’s also worth pointing out that Rogers Centre has not been the run-scoring haven that it used to be. I know we think of it as a hitter’s paradise, but it ranks as a bottom-third run scoring environment in two of the last three seasons. I’m also cautiously optimistic about Aaron Sanchez—if he can increase his changeup usage, he might be able to add strikeouts to an elite ground-ball rate and really turn into one of the AL’s best pitchers. But we need to remember that 2017 was not the first year he struggled with blister issues.

Howsam: Oddly, I think that’s a point in Sanchez’s favor. He led the league in ERA in 2016 while dealing with blister issues. It suggests that as long as they’re not acute, he can still very effective at less than full health. That changeup will definitely be something to watch, though, as he could use another weapon to help him with left-handed batters, even if it’s just to generate weaker contact instead of swings and misses.

But I think what we’re discussing here is the wide range of potential outcomes for this group. We just talked about Happ and Estrada, and the extreme ground-balling trio of Sanchez, Marcus Stroman, and Jaime Garcia in particular will need to rely on what could be a mediocre infield defense. So yeah, some extra bat-missing would still be nice.

Dika: Given the buyer’s free agent market, why not go in on one of the bigger ticket starting pitchers if you were the Blue Jays? Especially with Happ and Estrada becoming free agents after the 2018 season. All you had to beat was $12 million to sign Lance Lynn. Jake Arrieta got $75 million and three years.

Howsam: I’m not sure you can blame the Jays for those ones. You don’t want to be sitting there on March 10 and have those two (or Alex Cobb) sign elsewhere with no other options. Garcia was a decent pickup for his price at the time. I think there’s something to the notion that the Jays may have played it safe this offseason, though. Instead of “going for it” and signing a Lorenzo Cain, J.D. Martinez, or Yu Darvish, they picked up four players who they can control going forward (Grichuk, Diaz, Solarte, Garcia) or cut bait on after one year if things don’t work out.

With the extreme talent at the top of the division, the strength of the Twins, Angels, Mariners, and even the A’s, a postseason berth is still going to be tough to come by even with every Blue Jays move having at least raised the talent floor. So the front office gave themselves the flexibility to extend this competitive window for another year or two if things work out or to completely pivot to the onrushing Vladimir Guerrero Jr and Bo Bichette era. Given financial constraints, it’s not a hard position to understand even if it could be tough to watch. So I guess you could say they were both right and wrong to go that route given how the market ended up playing out.

Dika: We haven’t spoken about the other major transaction that lingered over much of the offseason—the rumors of a Josh Donaldson trade. I’m not convinced they were set on keeping him, but given how teams are holding onto their prospects (look at the light return the Tigers got for J.D. Martinez at last season’s deadline), the Jays weren’t going to get what they deemed to be full value for him. I bring this up because if they do decide to trade the former MVP, all the floor raising in the world won’t really matter.

Howsam: I don’t think the Blue Jays ever seriously considered moving Donaldson. Whether it came from ownership or Mark Shapiro, the Blue Jays entered this offseason planning to be relevant again. Trading your franchise player tends to make that hard in any market, but much tougher in Toronto. The fans came back in 2015 and supported this club. But after seeing Edwin Encarnacion walk last year, trading Donaldson would likely be a crushing blow to the bottom line. By keeping him and trying to win now, they can at least bank those ticket sales into mid-July. And this goes back to that same issue of roster flexibility. If everything goes the way they hoped, the Jays try to keep Donaldson around for the long haul. If not, they can trade all these impending free agents and go with the kids.

Dika: Despite this being a potential transitional year, I think there is enough to be excited about. There is enough upside on the major-league roster that they could contend for the second Wild Card spot. Then if things don’t break right, they’ve got some of the most exciting prospects in baseball in Vlad Jr., Bichette, and Anthony Alford. The system is much deeper than it was two years ago as well, so most Jays fans will be able to stomach it if things don’t go exactly to plan and have to turn our attention toward 2019.

But let’s not get ahead of ourselves! I’m predicting the Jays will be in a dogfight with the Angels and Twins come August for the second Wild Card slot, but ultimately might fall a bit short by the end of September.

Howsam: Agreed. We didn’t even get into the bullpen, but there’s a lot of upside there with recent additions Seung-hwan Oh, John Axford, and Clippard. Toss in some regular RISP luck for Roberto Osuna and you end up with a group at the end of games that ought to be able to hold some leads. So yeah, I also believe in this roster. They should be able to hit and pitch decently, and they have more depth to combat injuries. You mentioned the outfielders, but they also have some real arms on the farm in Taylor Guerrieri, Joe Biagini, Ryan Borucki, and Thomas Pannone (once he returns from suspension). Add in catching prospect Danny Jansen and you have some nice protection down in Buffalo.

This team should be good enough to play meaningful baseball right up to the last series of the year and that’s really all anybody can ask for.