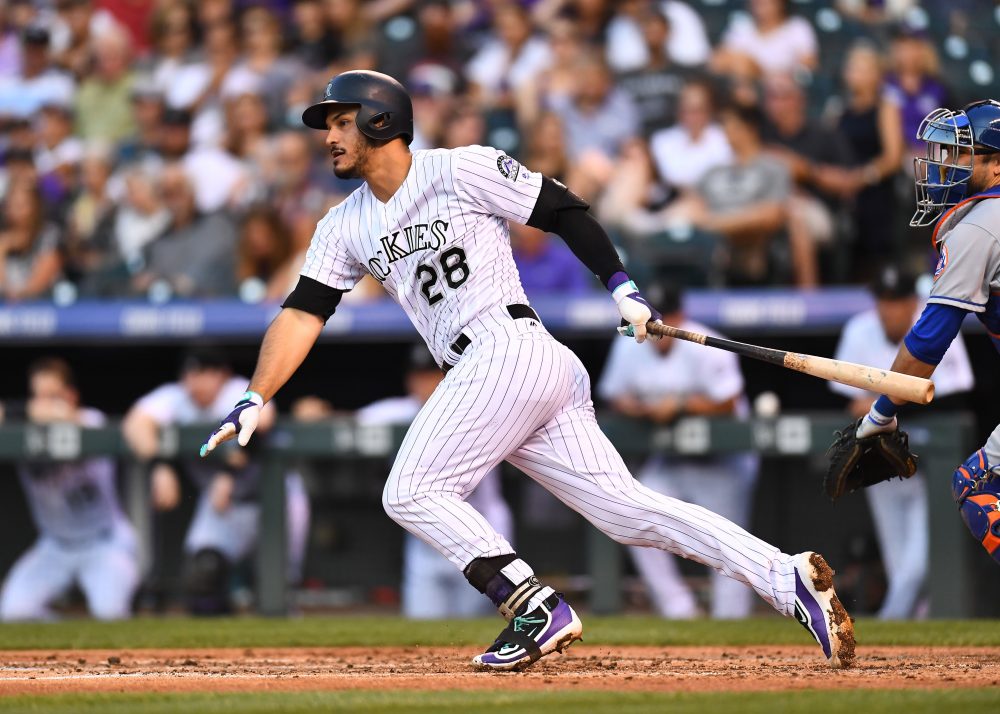 Jeffrey Paternostro: The Rockies were a bit of a surprise in 2017, riding a very inexperienced pitching staff to 87 wins and the second Wild Card spot. They even spent some money in the offseason, fortifying an already strong bullpen. Did they actually do enough, though?

Ben Carsley: That’s a good question, and in a vacuum I think my very confident answer is … maybe kinda yes-ish? Coors Field and the current offensive environment in general is so weird that the strategy of throwing Jon Gray, an army of no. 4 starters, and a good bullpen backed by a good offense out there makes some sense, even if I’d feel a whole lot better about their chances if they had even one more rotation anchor.

But we’re not in a vacuum, and when you look at the Rockies’ roster and their upcoming free agents, it seems like this is the year they should’ve gone all-in. Charlie Blackmon and DJ LeMahieu are free agents after this season, and Nolan Arenado could follow them out the door after 2019. You could argue that they have a replacement for LeMahieu in Brendan Rodgers, and maybe even for Blackmon in David Dahl, but it feels like if the Rockies are going to make a serious push, it needs to happen now. It’s hard to imagine a scenario in which they become appreciably better in 2019 or even in 2020, and that’s even if they manage to retain Arenado.

Paternostro: Yeah, my concern here is the medium term. Obviously competing with the Dodgers is going to be difficult for all the teams in the NL West. But I see a scenario where the Rockies let all three of those guys walk, and then what? It’s not as deep a farm system as it was the last year. They can keep throwing more mid-rotation arms out in Denver for another year or two (I imagine you will see Yency Almonte and Sam Howard at some point this year, Ryan Castellani the next) and there is a chance that at least one or two of that group plus German Marquez, Kyle Freeland, and Antonio Senzatela turn into good rotation pieces, but there is also a chance that all six post 5.00-plus ERAs in that park.

It’s a high-variance rotation, but the lineup actually worries me more at the moment. Are they going to play Gerardo Parra over Dahl? How many at-bats will they really find for Ryan McMahon? Was 2017 Trevor Story the real Trevor Story? How do they still have too many outfielders? Who do you think is the key for this lineup?

Carsley: Assuming we rule out Arenado, LeMahieu and Blackmon, since WYSIWYG, I’ll go with Ian Desmond. Not because of his contract, but because he has the potential to cover up so many holes on this roster. If Desmond is hitting well, you can stick him at first base if McMahon struggles, or shortstop if Story struggles, or in either outfield corner if the Rockies can’t conjure up two healthy and productive bats between Parra, Carlos Gonzalez, Raimel Tapia, and Dahl. It’s unlikely that all of the above will fail, mind you, but it’s nice to have a one-man insurance policy.

Of course, Desmond can only be an insurance policy if he himself is productive. That means he needs to stay on the field and stop hitting the ball on the ground at an Eric Hosmer-ian (62.7 percent) clip. Desmond is older than most people realize—he’ll be 33 in September—and he can’t rely on his legs forever. He needs to lift the ball more. You’d think Coors Field would offer enough of an incentive to do so, but here we are.

Anyway, who’ve you got for most important lineup piece? Pat Valaika? Tony Wolters?

Paternostro: Man, I saw a loooooooot of Valaika in Hartford and he’s been a more serviceable major leaguer than I expected—I was more of a Jordan Patterson guy—but I have no idea how they get either of them at-bats on the 2018 team. I think McMahon is the most interesting guy here. I wanted to pick Dahl, but the organization seems to have soured on him, prioritizing Parra and the rapidly senescent Gonzalez.

McMahon has all been handed the first base job, and his 2017 was a vast improvement over 2016. I’m not sure he’s an everyday guy at first base, the platoon and spin issues are still there, and he looked legitimately awful defensively at times—I’ve always liked him fine at third base. But if I’m too low on him, he could be a huge boon to a lineup that I worry will prioritize playing time for the wrong players.

Carsley: So we were just a little hard on the Rockies for not pushing enough chips in, and in the past they’ve been slammed for some of their weird free agent moves, like Desmond and Parra. But they’ve got Blackmon, Desmond, Dahl, CarGo, Tapia, Parra, and a ton of reserve types ready in the outfield. They’ve got Arenado, Story, McMahon, LeMahieu, Desmond, and Patterson ready in the infield, with Rodgers knocking on the door.

It feels like, barring a major injury to Arenado or Blackmon, they’re in good shape to survive the bumps and bruises that will inevitably knock a regular or two out at some point. Is it possible we’ve underrated the positional depth the Rockies have built, albeit in an unconventional way?

Paternostro: Jarrett Seidler and I did an over/under segment on our podcast, and when the Rockies came up we split immediately. I thought it was an easy over, he thought it was an easy under. The depth for me was a big selling point. They just have a lot of potential role 5 starter or relief types to throw at whatever problems they encounter in the rotation or bullpen. If CarGo is completely washed, or Parra continues to slide, they have Dahl and Tapia.

I guess the concern would be, what if they are generally healthy but pick the wrong guys? This is an organization with high-upside talent, but I don’t know if the starting nine on any given day—or the 25-man roster generally—will reflect that. It’s going to be a competitive NL West, and I could see them holding on to the veterans a bit too long in 2018 and see a potentially more competitive Wild Card race get away from them. Where do you think they fit in the National League playoff picture as it stands?

Carsley: I like the Rockies more than PECOTA does, I think, but nowhere near as much as the Dodgers, which is a piping hot take, I know. That leaves them competing for one of two spots with … let’s say the Diamondbacks, Giants, Brewers, Cardinals, and Mets (apologies, Phillies and Pirates fans)? They seem comfortably in the middle-to-back of that tier of second-best teams in the NL, so while I wouldn’t have them as favorites to make the playoffs by any means, it also wouldn’t quite be a Cinderella story if they manage.

We’ve skipped over their bullpen because, the merits of how they’ve constructed their roster aside, we believe it will be pretty good. And it seems as though we’re cautiously optimistic about the offense, even if we can’t pinpoint exactly who the production will come from. That just leaves the rotation, which we breezed by earlier because no one really wants to talk about this rotation.

It feels like this is always the case with Colorado, but I think their playoff chances hinge on whether one or two of their cadre of no. 4/5 starters can take a step forward. We know that Tyler Anderson and Chad Bettis sort of are who they are, so is there anyone out of the Marquez/Freeland/Senzatela/Almonte/Hoffman group you see as capable of serving as the Robin to Gray’s Batman? It sounds like you share my opinion that the Rockies need at least one of these guys to progress in order to make it to October. I kinda like Almonte, but I also have no idea what I’m talking about, so …

Paternostro: I love Yency Almonte even though I keep calling him Yohan Almonte, because there was a very fringy Brooklyn Cyclones starter in 2011 with that name. He has the most upside of that group of starters for me, but the secondaries are rougher at present than the already-in-the-majors guys. It’s a really good fastball he can throw to all four quadrants, and he can ramp it up late in starts. The funny thing is there is high reliever probability with the whole group.

I think Freeland has the most complete starter’s arsenal, but he also has the lowest upside as a rotation piece. I’ve generally been lower than the industry on Marquez. I never saw a major-league changeup, and he didn’t hold velocity/stuff for me. I might be holding onto an old look for too long, but it’s not like he was amazing in 2017. He also averaged just a tick over five innings per start and was a gasoline can third time through the order.

Bud Black and Steve Foster did a very good job measuring out innings and roles for these guys last year, and I suspect they are going to have to do it again. The added bullpen depth may allow them to pull the same trick twice, though.

I guess in the end this is another low-80s-win, high-variance team in a Wild Card race that will be full of them?

Carsley: Sounds right to me, yeah. Though if there was ever a team that should push some chips in around the trade deadline if they’re in the mix, it’d seem to be the Rockies. Which means they’ll probably just add another reliever.

You need to be logged in to comment. Login or Subscribe
deadheadbrewer
Spring stats don't count, but if Desmond is the "key to this lineup," then the Rocks are in trouble. Desmond is currently 3-for-31, with zero walks and 16 strikeouts. Yikes.
Reply to deadheadbrewer
Ben Carsley
Could've stopped after the first clause, my friend.
Reply to Ben
Cromulent
Cool feature. Either of you care to offer a hot take, or even a lukewarm take, on Jeff Hoffman? Thanks!
Reply to Cromulent
Ben Carsley
Jeff is better positioned to answer this than I am, but I'm pretty much out on him as an impact arm, at least as a starter. Think he's a no. 4/5 who occasionally dazzles but usually leaves you wanting more.
Reply to Ben
Jeffrey Paternostro
I think I was the last one off the Hoffman bus, but I think he is a change of scenery or a a bullpen guy. Sometimes that last grade of command just doesn't come.
Reply to Jeffrey
Paul Soglin
Am I miss reading the PECOTA projections but is Arenado going to hit .281 with 229 HR's scoring 79 runs with 94 RBI's? Why am I confused?
Reply to Paul