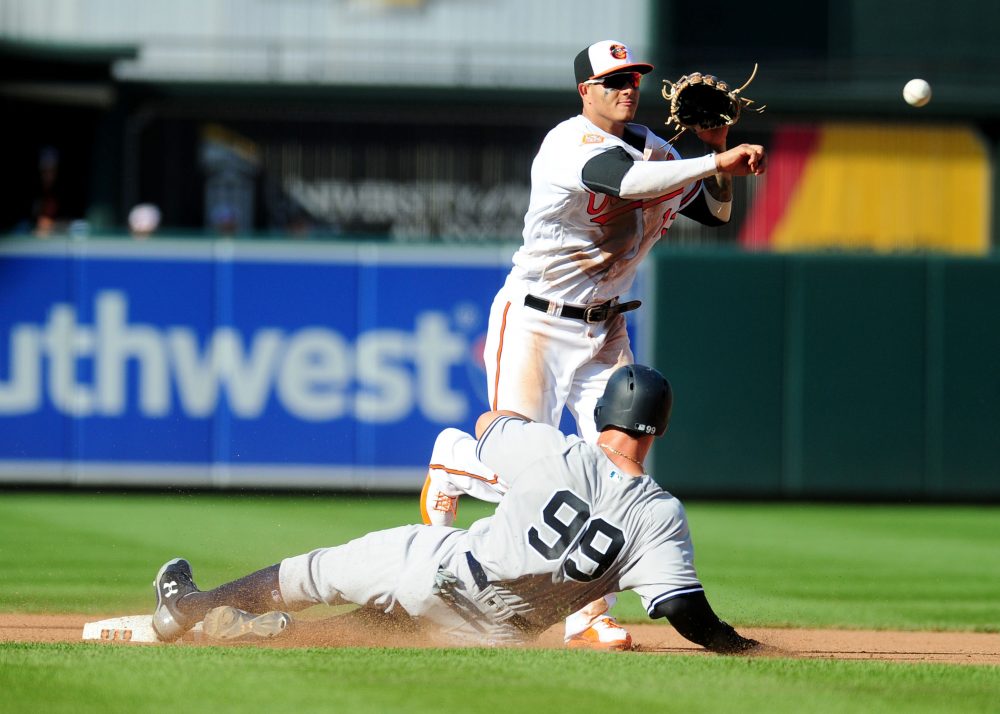 One of the lingering stories from this offseason has been Manny Machado’s future destination. It sure seems like he won’t be in an Orioles uniform for longer than 2018, and could even be somewhere else before the season ends. One popular destination that’s been floated in rumors has been the Bronx as there have been plenty of rumors indicating that the Yankees are interested in Baltimore’s star infielder.

Apparently the players also pay attention to the rumor mill, since Aaron Judge recently told Manny Machado during an on-field conversation that he would “look good in pinstripes.” We know that this happened because Judge told Mike Mazzeo of the New York Daily News what he was talking to Machado about when they crossed paths. You have to imagine that these types of conversations happen quite often on the basepaths, but it’s kind of rare to see a player go public like this.

Of course, once MLB got wind of this they weren’t happy with a player from one team putting it out there in public that he’s trying to get a player from another team to jump ship. As innocuous as Judge’s comments were, it elicited a warming from MLB to the Yankees. It was nothing too serious, but it was basically a reminder that tampering is still against the rules, even if it’s just a seemingly innocent conversation in the middle of a spring training game. Still, nobody got fined or punished here, so Judge and the Yankees are in the clear and—who knows? Maybe they’ll find out exactly how Manny Machado looks in pinstripes in the future.

Speaking of the Yankees, it’s abundantly clear that their outfield will be a source of strength for the upcoming season. It’s so much of a strength that they’re able to view players like Adam Lind as surplus, and they did this by releasing the 34-year-old lefty.

Lind had just signed with the Yankees on March 2 and reportedly would have been able to opt out of his contract by March 22, but both parties must have seen the writing on the wall when it came to playing time. Lind himself told Jack Curry of the YES Network that he didn’t see a path to 300 plate appearances with the Yankees, so that probably explains why Lind is now a free agent again.

Instead of being able to capitalize off of a season where he had a .303 TAv with 14 home runs over 301 plate appearances, Lind is once again back on the free-agent market. That’s not exactly the place to be with the way that this offseason has played out. Now he’ll have to find a team that can come up with a way to fit his skill set to what they need.

If you paid attention to last year’s World Baseball Classic (which you should have because it was insanely fun to watch) then you might have noticed a wrinkle in the rules they had for extra innings. If a game reached the 11th inning, each team got to start its at-bat with a runner on second base. Apparently baseball was pleased with how that went in the WBC, because Minor League Baseball has decided to adopt it for the upcoming season.

The big change between the WBC and MiLB is that, instead of waiting an inning before starting each frame with a baserunner already in scoring position, they’re just going to cut to the chase and add a baserunner in the 10th. So if you’re watching a minor league game this year, you might want to get ready for a whole lot of scenarios where teams are bunting the runner over to third base and working from there.

While you could absolutely make the argument that this rule could be beneficial in helping cut down on the usage of pitchers at a level where development is the most important factor, it’s still a very odd way to go about trying to reach that goal. Plus, there’s also the possibility that we could see this rule change implemented at the highest level of the game if all goes “well”—with “well” meaning that it isn’t a complete disaster and the fans don’t completely revolt against the rule changes.