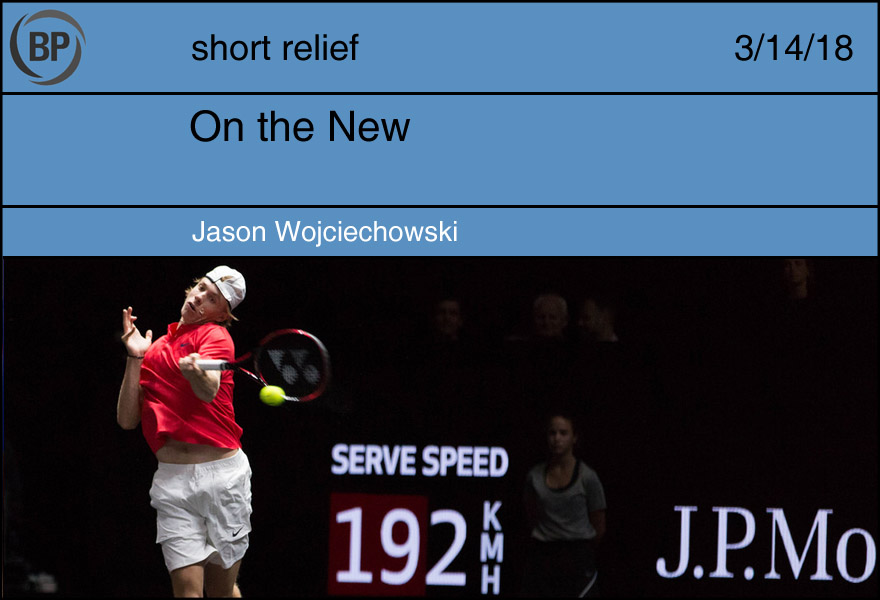 We went to the Indian Wells Tennis Garden this weekend for the BNP Paribas Open, also known as the Indian Wells Masters. We saw many tennis players, and all of them played tennis the same basic way. Sure, some were big hitters without much foot speed and some were small and fast and defense-oriented, but in the main, they all looked coached and polished and professional. They looked like there is one right way to play tennis, or at least one right way to play tennis the way that best fits their skills, and they had worked 10,000 hours times 10 honing that way.

All, that is, except Denis Shapovalov, a teenage Canadian who is presently one of the internet’s darlings. He lost the match we saw him play, to a player who right now should beat him, and who also right now should not beat him if we are actually amid Shapovalov’s ascendancy, as we are supposed to be. But no matter the final score, what we saw from Shapovalov was not robot tennis. It was not exactly joyful tennis, either, not some expression of the sweetness of life or anything so saccharine as that. It was too chaotic, too messy, too error-filled for flowery beauty. It was entirely too intense and too aggressive to be nice.

From that chaos and aggression, though, came a new kind of beauty grounded in the fact that Shapovalov seemed to be making up the entire thing as he went along. The conscious mind knows that he works on his form just as much as any player at his level does, that he spends hours and hours and hours studying video and hitting and working out and listening to his coaches. But the in-the-moment mind, the present mind tuned more to aesthetics than logic, begins to ponder whether Shapovalov was a being from elsewhere put on this earth with all the tools to be one of the best tennis players on the planet and but granted absolutely no idea of the rules. He sprinted around the court hitting shots at wild angles, tried for winners on balls most players are just barely nudging back, did at least two 360s, hit weird underhand volleys that never seemed to work but sure looked thrilling in the attempt. He was, in the shortest possible way, new.

I was put in mind of Hunter Pence. Riley Breckenridge once described Pence as follows: “He swings like he just mainlined a four-pack of Red Bull in the fourth inning of a sloshball game. He throws like he’s chucking jai alai pelota. He runs like he’s boneless and on fire.” This was a compliment. Pence does everything weirdly, awkwardly, wrongly. He’s simultaneously intense and goofy. It is not clear that he knows in any given moment what the goal is. He was also a mortal lock for 3 WAR per year in his prime. It just worked for Pence, and it worked in an endlessly entertaining way. I hope that’s worth something in baseball. I hope it remains worth something. 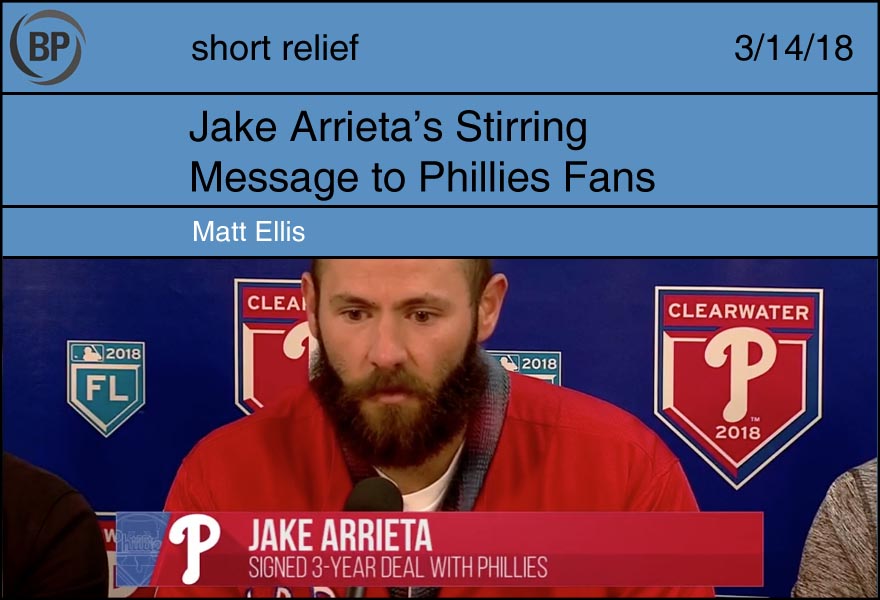 Philadelphiaaaaa how about those Eagles?

…yeah, so uh…just real honored to be here. Real excited, got my glove ready to go, just really ready to get to work. You know, when Scott called me, uh…I was in the basement, uh, playing 2K and I thought you stupid no goOD LYING PIECE OF SH…(ok jake calm down calm down buddy)…but uh you know…I came to, and picked up that phone and I can tell you, you know, the contract is one thing but the love this organization has shown me, um…it’s just a really exciting time.

Message to the fans? Oh well uh, the message that I really want to send to…not only the players but, you know, Philadelphia in general and the entire…uh…entire Phillies nation is that what we are going to do here is we are going to play some baseball. Like, me and Rhys, uh….we’re going to wake up in the morning and go to our morning workout and we’re gonna stretch our legs, maybe do that silly thing where you jog sideways and twist your stomach to the left, and then the right, you know…uh…yeah, then maybe I’ll throw a bullpen after, or shag some fly balls, who knows.

Uh…then every couple of days I will come out and start a game and, you know, I’ll throw even harder than I do in practice, and maybe it will work…or maybe it won’t. You know, there’s no guarantee that you’re gonna feel good or have the best stuff, or that you’re gonna get a great night’s sleep the night before. Hell, look at me right now, you think I had my head down on my pillow at 11pm? No, its going to…look I do this because I love the game, and I want to win. We’re going to win.

We are going to fight and uh, win. 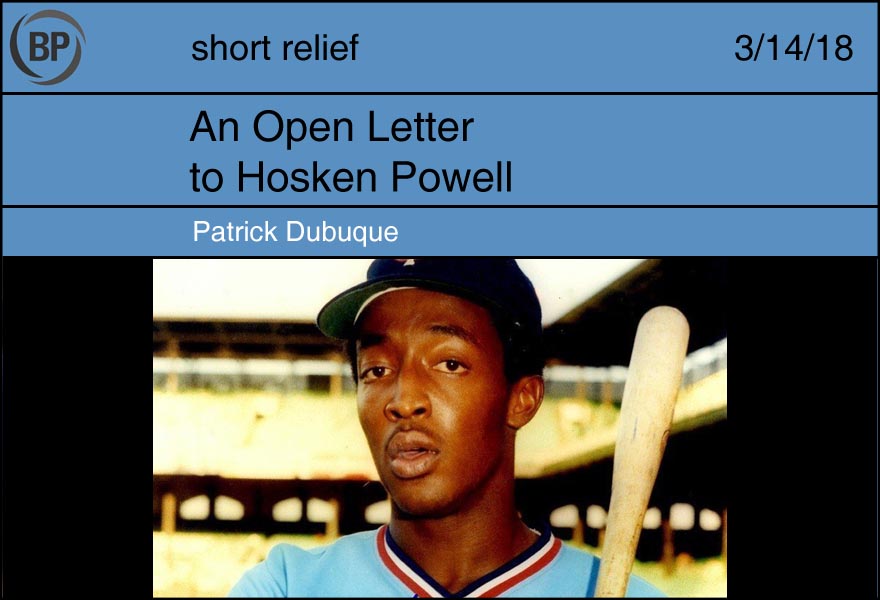 There will be better times, Hosken Powell.

It is almost spring. Time for hopes and dreams, but also maintenance: The productive, boring labor of the life held in steady orbit, the invisible progress of stretches and conversations. Grinding out a cure for depression in alphabetized vinyl and discarding expired herbs.Time to relearn the guitar, feel the burn of the G chord on your fingers. Time to sprinkle moss killer on the roof of your home, watch it swirl into the gutters with the moss intact, time to wonder how else one would apply moss killer, how it could possibly work. Time to imagine the death of disco and the bombastic, chest-beating promises of U2 and Gary Numan, to find one’s energy in others. Some will be wasted. Some will find holes.

If there is any value to this repetition, Hosken Powell, of swings and seasons and powder blue jerseys the color of an impossible, perfect sky, it is this: that each iteration just cements you as Hosken Powell, further denies the accusation that this is all coincidence, that you are not here at all. You are here and it is almost spring and hit or miss, they are always counted as plate appearances. Home runs are not living. Plate appearances are living, are days with bagels and phone calls and six pages of Infinite Jest read and instantly forgotten.

It is almost spring, and even though the plate appearances will run dry, one last two-hopper to second, one last groundball you could have run out, could have used it all up for if only you knew for sure it was the one — even though there will be a spring without you, Hosken Powell, there will always be Hosken Powells. Baseball will be changed by you. The world will be changed by you. And someday, some thunderous indigo autumn, even the moss on your roof will die, the same day the Twins win a championship. You may not be here to know it, Hosken Powell. But it will know you.