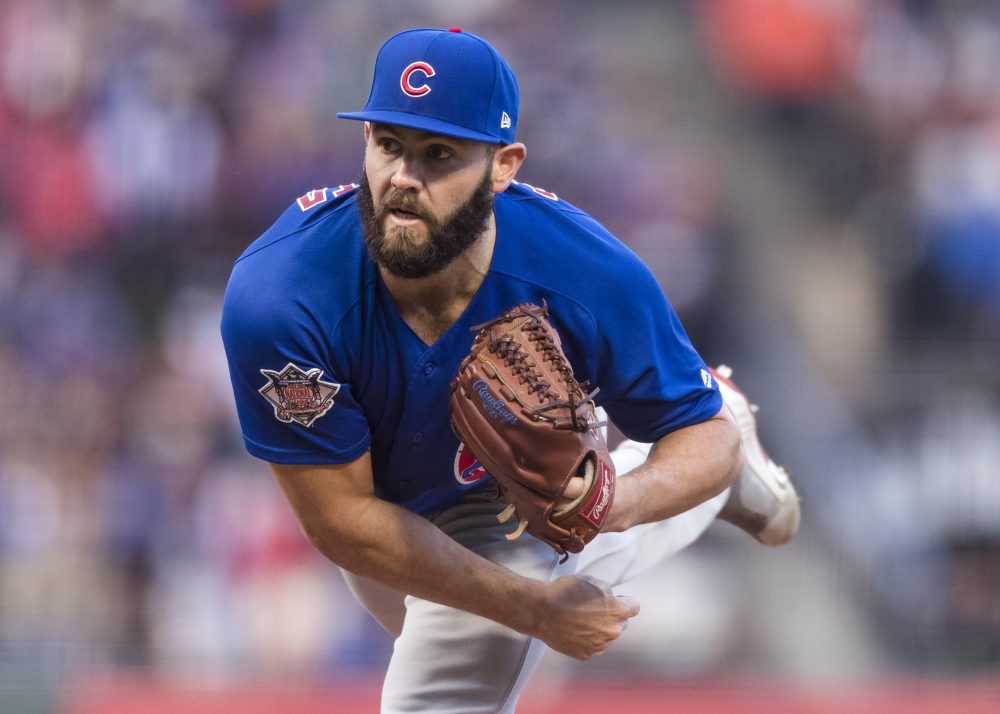 This was the weekend that baseball fans had been waiting for all winter. There was finally an uptick in free-agent signings, with the biggest one announced late Sunday afternoon; Jake Arrieta finally had a deal. Hallelujah!

Earlier on Sunday morning, the reports were swirling that Arrieta was going to sign with a team within the next couple of days. A few hours later, we found out which team he’d be joining when he agreed to a three-year, $75 million contract with the Phillies. Jon Heyman of FanRag Sports reports that Arrieta will be paid $30 million, $25 million and $20 million. He can also opt out after two years, but Heyman also reports that the Phillies can void that opt out by triggering a two-year extension that could make the deal worth five years and between $125-135 million.

Compared to the other deals that have been made in recent days (notably Mike Moustakas‘) Arrieta’s is pretty solid. Plus, he’ll have lots of money to spend on Philly cheesesteaks once he figures out which place is the best.

Where’s the best cheesesteak in Philly?

Another free-agent pitcher came off the board this weekend: Lance Lynn. His destination wasn’t too surprising if you’ve been paying attention to the signings this winter, because this team has made a few of them. Of course, I’m talking about the Twins, who are clearly making a run at Cleveland this season. They signed Lynn to a one-year, $12 million deal and later released Anibal Sanchez, who they signed earlier this winter, to make room for Lynn. Sanchez’s deal with the Twins wasn’t guaranteed, so he’ll get $417,000 for his troubles; it would have been $625,000 if the Twins had waited until Tuesday to make the move. So now Sanchez has the chance to catch on with another team. As for Lynn, the Twins got a solid pitcher who has been durable during the seasons when he wasn’t recovering from Tommy John surgery, and he’s been solid since returning from surgery. He threw 175 1/3 innings in 2017 and pitched to a 3.43 ERA and 4.54 DRA. He struck out 167 batters and only walked 66.

Veteran free-agent catcher Jonathan Lucroy has landed with the Oakland Athletics. According to Susan Slusser of The San Francisco Chronicle, the deal is for one year and $6.5 million, and does not come with any incentives. Lucroy, who played with Texas and Colorado last season, didn’t hit for a lot of power—only six home runs—and he had a rough-enough start in Texas to warrant a mid-season trade to Colorado. Lucroy did enjoy a second-half surge at Coors Field, batting .310/.429/.437 in 46 games with the Rockies. Lucroy’s defense has fallen off a bit in recent seasons but he’s still an upgrade at catcher for the A’s and, at that amount of money, he’s a steal. The A’s will be Lucroy’s fourth ball club in three years.

Oakland needed a veteran to provide some guidance for its young players and Lucroy provides just that for catchers Bruce Maxwell, Josh Phegley and Dustin Garneau. He can do the same for the A’s young pitching staff as well; the oldest pitcher in the starting rotation this season will be 27.

Maxwell, who could be battling for playing time with Lucroy, seems happy with the acquisition. He told John Shea of the San Francisco Chronicle: “Due to the circumstances, they feel they need a veteran presence, especially for our young pitching staff. I feel it could definitely aid us down the road. Aid myself, too. I can learn from that guy.”

The Blue Jays released outfielder Ezequiel Carrera, which wasn’t unexpected. He was outrighted to the club’s Triple-A team in Buffalo earlier this month. Now, the 30-year-old outfielder has a chance to catch on with another team. This wasn’t a performance-based move but a “we have too many outfielders” move. The Jays signed Curtis Granderson this offseason and traded for Randal Grichuk plus they already have Kevin Pillar and Steve Pearce. Carrera had a solid 2018 playing in 131 games and batting .282/.356/.408 with eight home runs.

Carrera made his MLB debut with Cleveland in 2011.