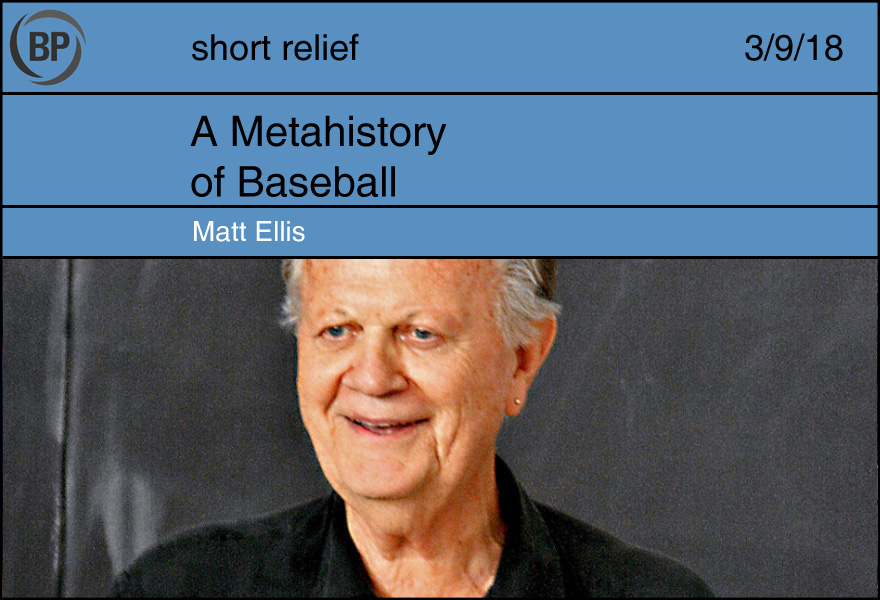 Good afternoon ladies and gentlemen of the radio audience, today we are out at the Polo Grounds, that historical home of the New York Giants. There were sixteen teams, enough today to be a simple conference, but then the entire league. Nevertheless, an argument about what could be, what should be, and importantly, who should be. Some World Series, perhaps another All-Star Game. A reminder that history itself only operates through the particular narratives we enable it to engender, which gives us cause to read our Hayden White (RIP this week):

“What is the point of it all?” These questions have to do with the structure of the entire set of events considered as a completed story and call for a synoptic judgement of the relationship between a given story and other stories that might be “found,” “identified,” or “uncovered” in the chronicle. They can be answered in a number of ways. I call these ways (1) explanation by emplotment, (2) explanation by argument, and (3) explanation by ideological implication.

First: emplotment is a kind of story. This is the narrative of Chone Figgins, one who was put into a particular situation in order to provide a specific outcome who nevertheless was a victim of history and contingency: and one in which failure becomes explicitly readable. It is an outcome which doesn’t quite line up with the radio industry’s appropriation of baseball as a convenient narrative to tell its stories, one in which causal outcomes give viewers/listeners reason to come back, again, and again.

Second: explanation as argument. This form gives credence to normative statements which delimit the things that are thinkable or possible, and I for one want to point to an impossibility in the nature of trying to make baseball talk to storytelling: Jim and Pam were destined to be together. But Ichiro returning to the Mariners, Joey Bats flipping the stick in the playoffs, and theories of building do not necessarily need to fit this logic: what do we do with a system that valorizes immediate profit over narrative return for the fanbase which produces the profit in the first place?

Third: explanation by ideological implication. It’s not for nothing that Jon Jay could become an accidental happenstance for these teams–and one whom could be relegated to pure luck. Nevertheless, we are left wondering about the way many of these teams conceive of both history and narrative possibility in a market that has upended value as a constitutive construct: The Mariners have resigned Ichiro, the Padres are taking flyers. Where do you put your fandom, and where do the Phillies cash out their bonds?

Until then, we wonder. But the Phillies could tell you that nothing, if not anything, is inevitable in the entire process. 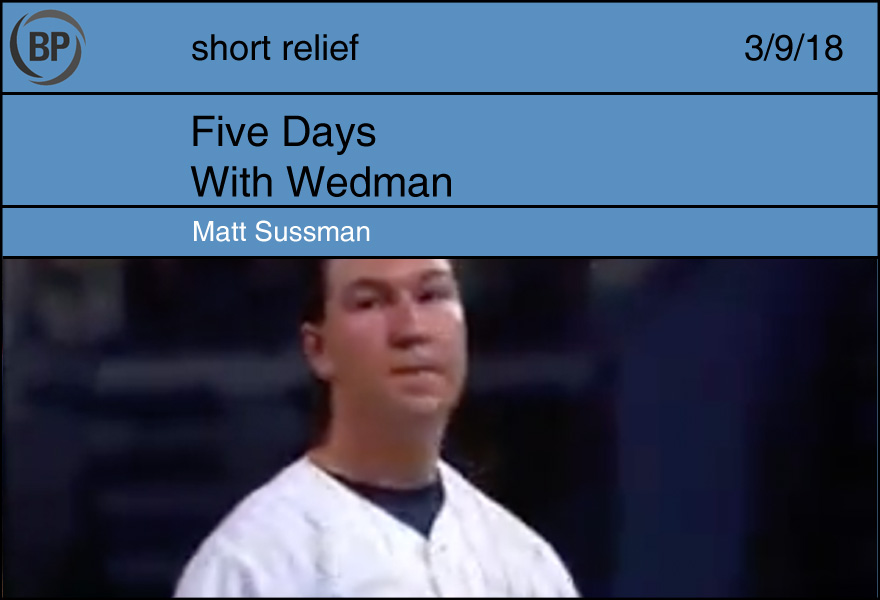 In obvious reverence to this.

“Should have started Wedman.”
–Joey, classmate of Billy Heywood

Day 1: He doesn’t say much. Not many say much to him. Bill Wedman is not called upon often from the bullpen, making a spot start here and there. Today is one of those days where he gets tapped on the shoulder by the manager in the clubhouse. The regular pitcher needs a blow, and we need at least four innings out of you.

Wedman doesn’t remember how long he played baseball. He was just the best at it from his hometown, and kept doing it until he got here, the Minnesota Twins bullpen. He has a few pitches, no signature out pitch, but just enough stuff to get by. That he doesn’t pile up the records or throw much beyond 90 means opposition scouts only put in minimal time. The pitching coach isn’t even quite sure of all of his pitches when I ask him. He’s pretty sure he throws a changeup, but maybe it’s just a bad fastball. I guess there’s a reason he’s in the bullpen.

The lefty does all right, finishing 4 ⅔ innings, striking out one and allowing three runs. It’s better than you could have done, and the bullpen will take it from here. He will get neither the win nor the loss, and that’s just fine with him. Wedman baseball cards do not sell well on the open market, and that’s how he likes it. Now he can just sit back in the dugout and watch the game he still enjoys with a pretty nifty view.

Day 5: Off day. I’m still expensing all this.