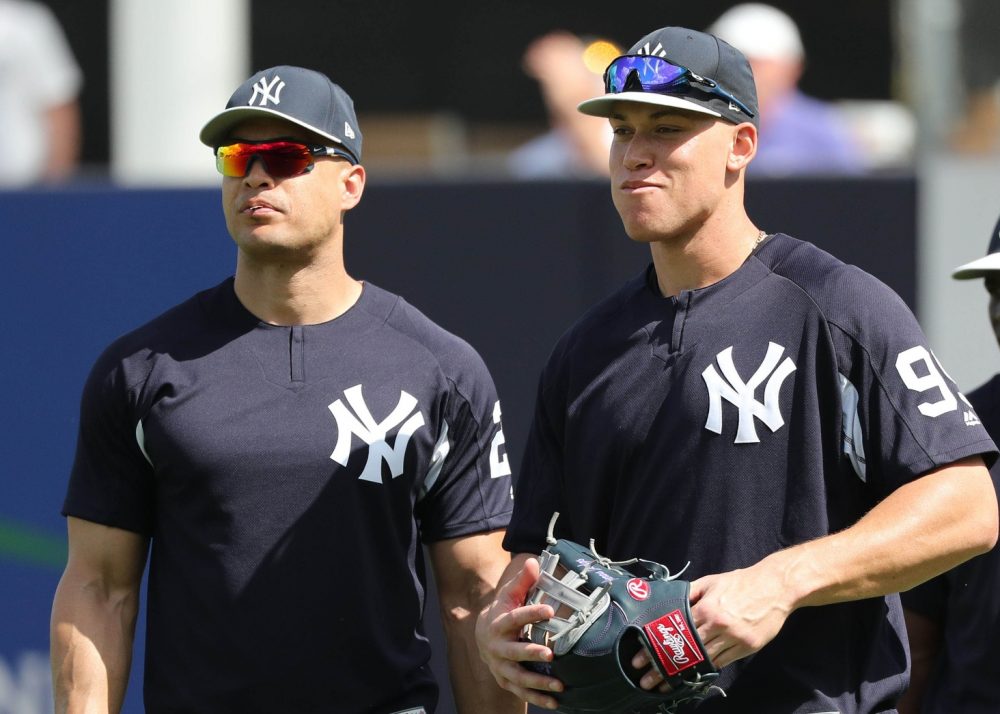 Zach Steinhorn: Strange offseason for the Yankees. The one major move they did make, trading for Giancarlo Stanton, was completely unexpected, while the move we were all anticipating, either trading for or signing a high-end starting pitcher, never happened.

I definitely would have felt more comfortable about the offseason if they had added another starter in some capacity, whether by trade or via free agent signing. I was actually surprised they didn’t go full villain this offseason and sign Yu Darvish, but Hal Steinbrenner is all about the $197 million.

Steinhorn: Yeah, they’re obviously serious about staying under that luxury tax threshold, which is what made the Stanton trade so bizarre. This is a team that scored the second-most runs in the majors last season, trailing only the Astros, so was using most of their payroll flexibility on Stanton a smart move? This is a George Steinbrenner move, all about the star power.

For awhile, it looked like they were going to get Gerrit Cole, who was especially appealing since he’s under team control through 2019. For the first time in a long time, they have a deep enough farm system to make significant “win now” trades. I guess Pittsburgh’s asking price was too high. But then the Pirates turn around and trade him to Houston for an underwhelming return package. What’s up with that? Maybe Brian Cashman left Neil Huntington to pay the whole bill at their winter meetings dinner and revenge was in order?

Gotsulias: I can admit that the Astros getting Cole annoyed me a little bit, right? Only because, as you said, the Pirates wanted so much more from the Yankees and settled for way less from Houston. Nice double standard there, Neil. I’m glad Cashman saw through Pittsburgh’s nonsense and didn’t give any of the good prospects away. Cole is good and under team control through 2019, but he’s not worth what they were asking for.

So what do you think about the rotation as is? I think the two biggest question marks are CC Sabathia and Masahiro Tanaka, with Tanaka being the more important of the two. CC isn’t expected to be the ace. Tanaka, on the other hand, really needs a bounce-back season after last year. Do you think he has one? And how smart was Tanaka to not test the free agent waters and re-sign with the Yankees? He could have been one of those players in the free agent camp still waiting to be signed!

Steinhorn: Tanaka is a smart guy. He said that it was an easy decision to stay because he loves New York and loves the franchise, but we all know the biggest reason why it was an easy decision. He’s been pitching with a partial UCL tear in his elbow since midway through the 2014 campaign. It’s a matter of when, not if, he will need Tommy John surgery, so I’m sure many teams would have been hesitant to take on that risk.

Gotsulias: I keep forgetting about Tanaka’s UCL that’s hanging by a thread—I tend to push stuff like that to the back of my mind and completely ignore them.

Steinhorn: Believe me, I’d like to forget about it too!

Gotsulias: And how about CC? I’ve said the same thing for close to three years now and everyone else has hopped on board: CC Sabathia has become Andy Pettitte. He’s the old guy in the rotation who can’t dial it up to 97 but can throw tricky pitches that often fool hitters or just make them hit ground balls. If Sabathia’s cutter is working, and his slider and changeup are dropping the way they should, he will have a nice 2018.

Steinhorn: I’ve been very impressed with how CC has reinvented himself, especially since he once relied so heavily on that 95-plus mph fastball. A few years ago, he looked done, but outside of Luis Severino, he was the most reliable pitcher on the staff last year. Now let’s just hope the knee holds up and he can make at least 25 starts. I am a little concerned about this rotation, though. Sonny Gray hasn’t exactly been the model of health either, so I can easily see a situation where Justus Sheffield and/or Chance Adams are needed to fill in. Will they be ready for the big leagues by then? Or, the Yankees might be forced to trade for another starter in-season.

Gotsulias: I totally agree. I can also see a scenario where one or both of Sheffield and Adams will be called upon to start at some point. I just hope that the injuries are not major. Famous last words. How do you think Severino will do in his second full year as a starter? Will there be a dreaded sophomore slump? These things tend to happen. Again, the Yankees have kids who can fill in holes and there’s always the trade deadline if things go extremely awry, but I’d love to see Severino have a good sophomore season, continue to defy expectations, and show the people who thought he was too small that he could continue to be a viable starter.

Steinhorn: Well, Severino better be almost as dominant as he was last year or the rotation could be in trouble. I worry a bit about the huge innings increase, but I think he’ll be fine from a performance standpoint. He strikes out a ton of batters, doesn’t walk many, and induces plenty of ground balls, which is especially important considering that Yankee Stadium is so long-ball friendly.

Severino and Aaron Judge were the two biggest keys to the team’s success last season and they both wildly exceeded expectations. Who are your breakout picks for this year?

Gotsulias: My breakout pick on the hitting side is Greg Bird. I am actually writing this with my fingers crossed on one hand and honestly, it’s taking me a little longer than usual. I just want to see what Bird can do over a full, healthy season. His left-handed swing is tailor-made for Yankee Stadium. I also think the Yankees’ training staff should cover him in bubble wrap just to be safe.

My breakout pick on the pitching side is Gray. I know you’re worried about his health. I am too, but I’m hoping Pickles can stay healthy and be consistent in 2018. I know PECOTA isn’t expecting much from him. Honestly, it’s not expecting much for the entire starting rotation (what’s up with that?), but I’m optimistic that Gray can put it together and have a strong season in his first full go-around with the Yankees.

Steinhorn: I like those picks. Gray is so important to the success of this staff as a whole. He’s coming off a season in which he posted the highest walk rate of his career, so let’s keep an eye on that. Bird showed in the postseason what he can do when healthy. And hey, if he misses any time, they have old reliable Adam Lind ready to fill in, assuming he makes the Opening Day roster.

I’ll choose Miguel Andujar as my breakout hitter. He’s tearing it up at the plate this spring, and while he might not open the season with the big-league club, he’s going to make an impact before long. I don’t see Brandon Drury standing in the way.

Gotsulias: I’m excited about Andujar. I’m also excited about Estevan Florial. I know he’s a ways away and it’s possible he could be trade bait, but wow, that kid is fast.

Steinhorn: And for breakout pitcher, I’m going with Jordan Montgomery. He’s the forgotten man on the staff but very quietly pitched extremely well in his rookie season last year. I can totally envision him taking a step forward this season. Doesn’t he kind of remind you of Pettitte?

Gotsulias: Montgomery is the forgotten man in the rotation. I literally forgot about him. He definitely reminds me of a young Pettitte. Who wouldn’t want another Pettitte-like pitcher on the staff? I was thrilled with how his 2017 turned out and would be thrilled again if 2018 were more of the same.

Steinhorn: It’s certainly crowded, with five guys (six if you count Clint Frazier) for three outfield spots plus the designated hitter. I think one of the biggest disappointments of the offseason was not being able to unload Jacoby Ellsbury and that ridiculous contract, but who could blame any team for not being interested? I just hope the whole Ellsbury situation doesn’t become a distraction throughout the season if he’s unhappy with the lack of playing time.

Steinhorn: It’s a good problem to have, but still …

Gotsulias: What did you think of the Aaron Boone hire? I was pulling for Hensley Muelens because I’m old enough to have watched him play as a Yankee and thought it would be an intriguing move, but I wasn’t angry about the choice. I just hope the New York media isn’t too tough on him when he makes his first mistake as manager.

Steinhorn: I’m fine with Boone. He obviously knows his stuff, having been around the game his whole life as part of a three-generation baseball family. Just add the Yanks to the list of teams with young, analytic-savvy managers. Not that Joe Girardi wasn’t a numbers guy, but Cashman feels that Boone can more easily relate to and communicate with the Millennial generation of players. I mean, how many players on the roster can even remember watching Girardi play? But like you said, Boone is certainly stepping into a high-pressure spot. The Yankees need to win big right now, and while they played the lovable underdog role last year, non-Yankee fans are officially hating them again. Now we’re back to the “anything short of a championship is a failure” mindset.

So, what’s your prediction for 2018? Will the season be a failure?

Gotsulias: I intensely dislike making predictions but since it’s a part of the gig, here it goes: The Yankees will win more games than they won last season and they will win a hotly contested AL East race. As for the playoffs, I don’t like predicting them until they’re about to start. I know, what a cop-out. And will the season be a failure? If they don’t win the World Series, yes, it will be a failure. No pressure!

Steinhorn: I’ll say they finish 93-69, win the AL East by two games over the Red Sox, and get a rematch with the Astros in the ALCS.

You need to be logged in to comment. Login or Subscribe
Aaron Barbara
so you're glad the Yanks didn't overpay for Cole and that one of your toughest obstacles to WS and the defending champs improved and got him instead. Yep, makes perfect sense.
Reply to Aaron