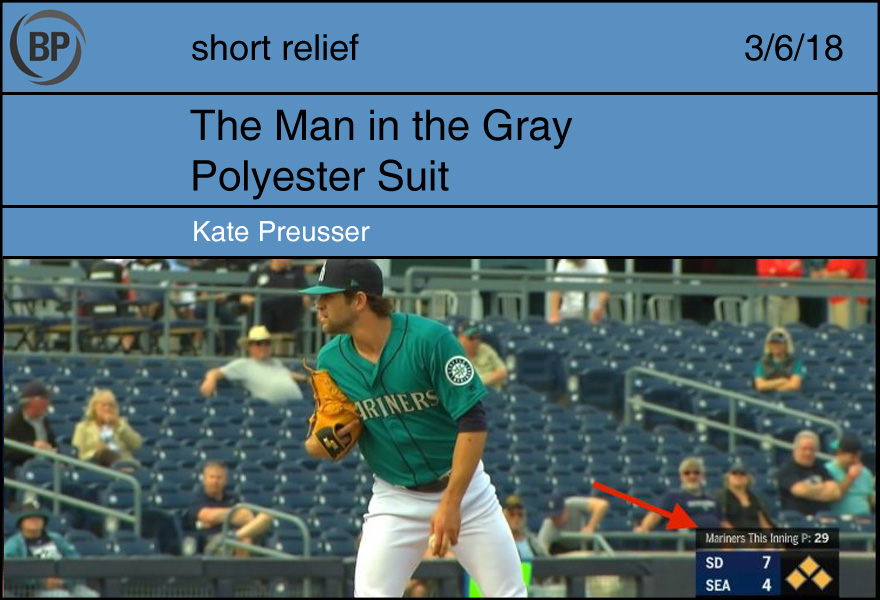 He’s known subsistence-level baseball. Two years of junior college, riding buses over rutted roads that are in only slightly better repair than the fields they’d buried afternoons in, where the best outcome is to not twist an ankle in a patch of marshy outfield; crowds in the double digits, indifferent umpires, indifferent teammates. Drafted on the last day, if he’s drafted at all; no party, no ceremony, just a number on his phone from an unrecognizable area code. Maybe there’s time for a cake before he has to report to his new team, depending on how far he has to travel, when he got the call. It won’t have his name on it–no time for that–but maybe there will, at least, be cake.

Then, three more years of that, or four, or five. Things improve gradually: the fields, the buses, the crowds. He goes back to his hometown for Christmas–in between fall instructs and spring training–and finds they’ve razed the nearby outdoor shopping mall, the one where he used to see Santa and buy sneakers two-for-one every school year. His mother can’t remember when they knocked it down, but is excited about the Target going in. The next time he goes home, it’s already there, the parking lot starred with cars, as if there’s never been anything there other than that Target. He is ticketed for the California League, again. More time with the movie stars! says his grandmother, and he nods, thinking of Bakersfield, Lancaster, Visalia.

Now he’s here, the part of Spring Training that everyone hates, treading the mound in a big league game, wearing whatever jersey they have. Today he’s number 87; yesterday there was a different number 87; tomorrow he might be 78. 88. 77. The announcers are deep in dissecting the food options in a ten-mile radius of the stadium. They might call him by his name, or just as easily call him by his teammate’s name, a mistake that may or may not be corrected. The game is most likely a blowout, one way or another. Looking into the dugouts, he sees a stretch of faces like his, yet not his, and for a second he sees the layers clearly, like Russian nesting dolls: the tiny peg with a crudely human face that is him standing on this mound, encapsulated by all this isn’t him but is almost-him, interchangeable to him; and beyond that, layer upon expanding layer of all the not-himness in the world, and he has to take a moment to step from the mound, in order to not let the weight of it all crush him.

He wipes his brow and steps back on the mound, looking in to get the sign from the pitcher. For the first time, or the fiftieth, or the five thousandth, he or someone like him lets the pitch fly. 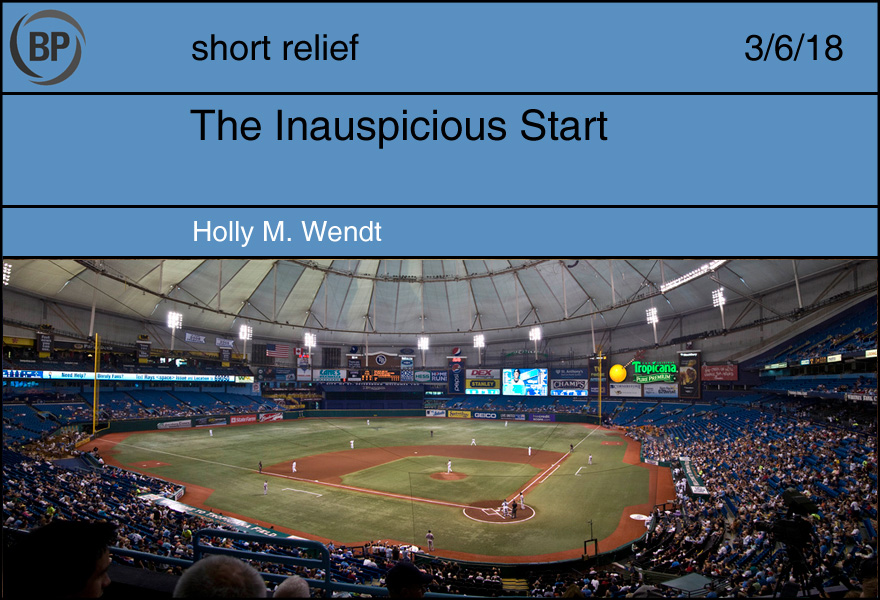 I spent Monday in airports, trekking south a few days early for the Association of Writers and Writing Programs conference, an annual cataclysm of ten thousand or so creative writers and publishers, held in Tampa this year.

The last time I was in the area, in 2011, there was also a conference, a different one, much smaller. That time, an unnamed storm pulled a cruise ship from its moorings and rolled tractor trailers and dumped three inches of rain on Saint Petersburg, trapping a few hundred humanities scholars in a hotel conference center. The next day, both conference and storm were over but baseball was just beginning. For the first time, circumstance allowed me to see Opening Day baseball in person, Baltimore versus Tampa, on the first of April.

Tampa opened the season with Johnny Damon in left field and Manny Ramirez as DH. David Price was on the mound for Tampa, and though there were perilously few fans to attest to the team’s hope, the hope was there, it seemed. The Rays, however, would go on to lose their first six games of the season. Manny Ramirez would play in exactly five games and hit no home runs before an abrupt retirement on April 8.

On that Fools’ Day, the Rays lost what I remember as a terribly sleepy game punctuated mostly by one miserable fan sitting nearby. Displaying a very tenuous grasp of baseball’s rules, he critiqued Joe Maddon’s every move at the top of his lungs—including being angry that Maddon didn’t have Ben Zobrist leading off every inning—and embarrassed his wife, who finally convinced him to leave around the fifth. Brian Roberts hit a three-run homer for Baltimore in the eighth, negating what had been a strong David Price start. Tampa mustered one run of resistance in the bottom of the inning, but that was the sum of it.

That night in Tampa, there was no sign of the September to come, the best-ever night of baseball that was capped by Tampa’s late-season claw-back to capture the Wild Card in a game 162 that was pure sports movie bingo: a powerful, unlikeable adversary (Yankees); doubting fans (people leaving in disgust as the Rays dug an 0-7 hole in the fifth); heroics by the underperforming hero (a two-homerun performance by Evan Longoria in a rough-for-him season); excruciating tension (three extra innings); and the free space, heroics by the unlikeliest of heroes (Dan Johnson’s tying home run in the bottom of the ninth).

If it had been a movie, I would have resented its every minute as the manipulative cliché it would be. But it was reality, spun from the same stuff as that underwhelming Opening Day, and so it was nothing short of magic. 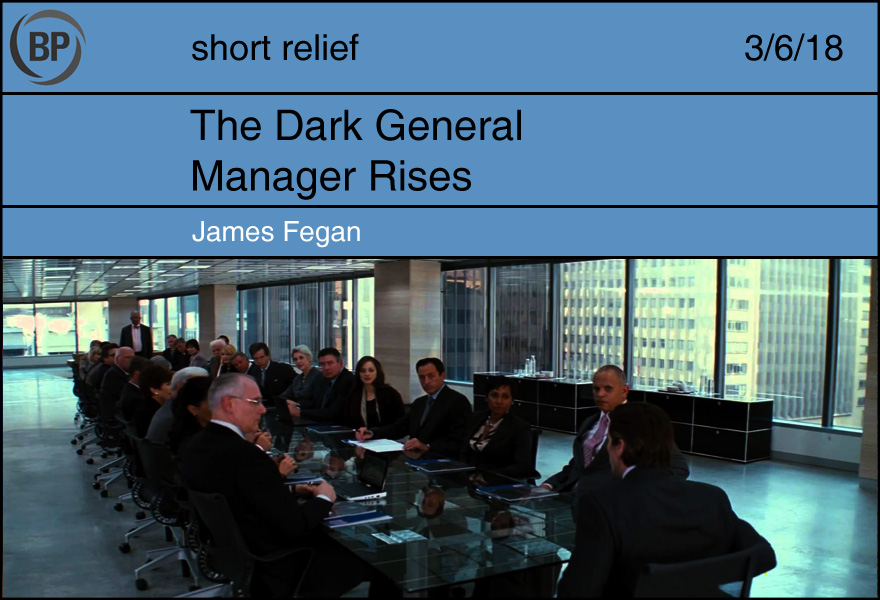 [The gem-encrusted boardroom of Wayne Enterprises is filled with discussion of more massive expenditures, sloppily hidden in the R&D budget]

WILLIS: It would hurt his feelings if we let him know we knew about all the projects

REESE: How much longer do you really want to keep up this lie?!?!

[Bruce Wayne enters, which in itself ends another mysterious five-month absence]

WAYNE: It’s the new frontier of justice for my—uh—the caped crusader—uh…Batman, to tackle…

WAYNE:…in my opinion, not that I have any influence…

WAYNE: These FAT CAT OWNERS, I know, they’re driving us ALL up the walls!…Much like the ones the Dark Knight himself climbs while keeping us safe.

WILLIS: Sir, we posted another $6 billion loss last quarter, is there something you want to tell–

REESE: You want us to put some pressure on the owners? Literally all of them are shareholders.

WAYNE: For TOO LONG the balance of capital in the game has shifted away from labor.

REESE: Absolutely, I’ll call Manfred. He’s scheduled for our golf outing on Thursday already. Your father had drafted a position paper on minor league wages weeks before he died.

WAYNE: We don’t have time for bureaucracy!

WILLIS: We could buy a team; we have the capital on hand to pull even the most debt-ridden franchise into the black.

WAYNE: Baseball! A metaphorical Gotham…but what can one man hope to accomplish in such a world?

WAYNE: I need to become something more—

REESE: –not unlike the phenomenon of urban crime in that regard–

WAYNE: A symbol, that shows people don’t have to be afraid that elite baseball talent will not be paid in line with their value. Because sometimes the realities of the market aren’t good enough, sometimes labor deserves to have their work rewarded…

[The next morning, MLB Network broadcast]

“All of baseball is buzzing after news of a mystery team being in the market for Mike Moustakas for six years, $175 million. Word of the surprise involvement were distributed via an anonymous secure drop overnight to several national reporters. There’s no information on the source of the rumor at this time, but we’re going to go ahead and assume it’s Scott Boras and…probably the Angels are involved. Arte Moreno can’t help himself!

In other news, Bob Nutting was assaulted outside his home last night and tied to his garbage can with a grappling hook…”