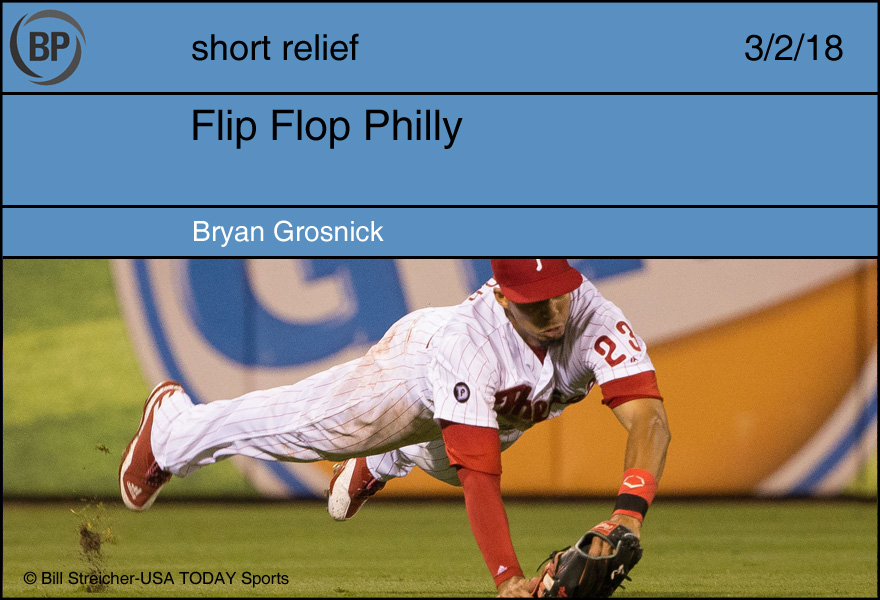 Maybe this is crazy. Maybe it isn't. The Phillies have seen the future. Are we ready? https://t.co/mDMjUPncIw pic.twitter.com/t6OLLCq06o

Excerpt From Game Report 05/10/18:
Rhys Hoskins, who went 0-for-3 with a walk in the loss to the Giants, gave an emphatic response to one reporter’s question about the play in right field that turned the tide in the sixth inning. NL Player of the Month Evan Longoria laced a sharp line drive into right, where it appeared Hoskins had trouble both reading the ball off the bat and then chasing it down in the corner.

“Look, it’s not fun out there right now. I go out there and play wherever Kap asks me to, but it’s awfully tough to adjust going from left to right and back mid-inning. And I get that the delay isn’t fun for anyone, but the boos from the bleachers don’t really make it any easier. I wish they’d play some music or something during the break.”

When a reporter asked Hoskins if his legs were tired from hustling between outfield positions, he gave a curt “no comment” and turned away.

Excerpt From Game Report 07/15/18:
Aaron Altherr’s 2018 breakout has been one of the many feel-good stories of the first half in Philadelphia, and the Phillies’ 6-1 victory over the Marlins in the final game before his first All-Star appearance was more of the same. His two-run double put Philly ahead to stay in the second inning, and a diving grab by Lewis Brinson on what could have been a bases-clearing double will certainly appear on highlight shows tomorrow morning.

When asked about what has made this season special, Altherr ticked off a laundry list of good-teammate clichés: the Phillies being just a game behind the first-place Nationals, the positive energy that new arrivals like Gabe Kapler, Jake Arrieta, and Carlos Santana have brought to the team, the hot hitting of Hoskins, Jorge Alfaro, and J.P. Crawford, and finally staying healthy himself. But he also said something unexpected as he was leaving the post-game scrum:

“Y’know, this might sound silly … but this outfield switching thing is kind of a nice way to stay energized throughout a long game. The fans love the Cha-Cha Slide when we switch, we’re having fun, Odubel’s dancing … but the real benefit is keeping the blood flowing through a long game. It gets a little bit stale out there sometimes.”

Excerpt From Game Report 09/17/18:
When asked how it felt to play spoiler and eliminate the rival Mets from the Wild Card race after Monday night’s win, “center fielder” Odubel Herrera’s eyes lit up.

“It’s great. Y’know, we really would have liked to still be in the race, but every game still matters, and we’re really setting up the groundwork for next year. This time next year, we’ll be right there in the race or on top of the division.”

One reporter asked if Herrera thought that the team would continue using the strategy the media now calls The Wheel, where the team rotates all three outfielders on certain plays to avoid having two outfielders run the length of the outfield to change defensive alignments.

“I think it depends, but it’s worked out okay. Now you see the Cubs doing it with Schwarber, the Rays switch outfielders almost every play, lots of teams are trying it.”

“I just wish they’d stop playing the Cha-Cha Slide every time we switch it up. That song’s awful, man.” 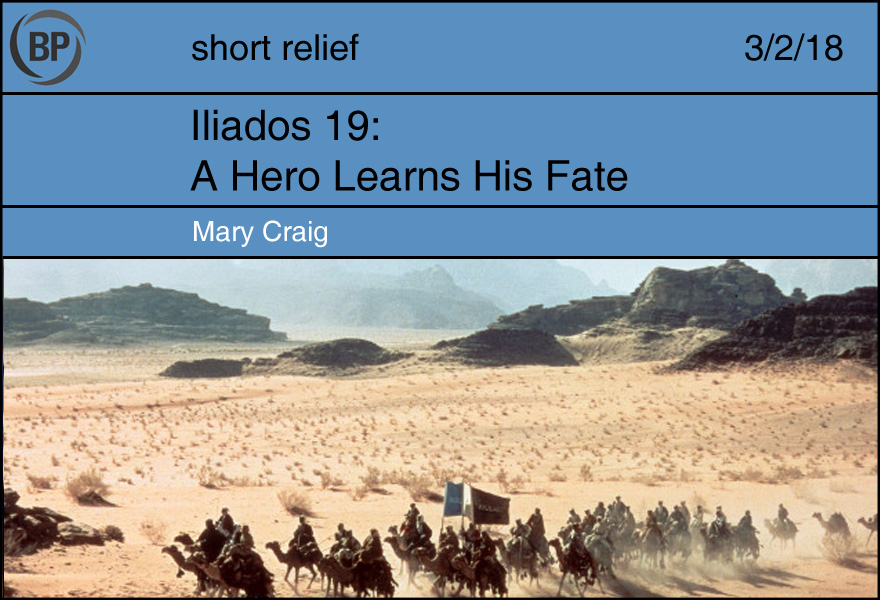 Following a respite from battle, our hero, emboldened by the loss of beloved Dusty Baker, prepares to re-enter the fray. Struggling to comprehend his own mortality in light of recent tragedies and a long-told prophecy of his end, by the conclusion of Book 19, he fixates on the task at hand: vanquishing the enemy and winning glory for him and his beloved friend. 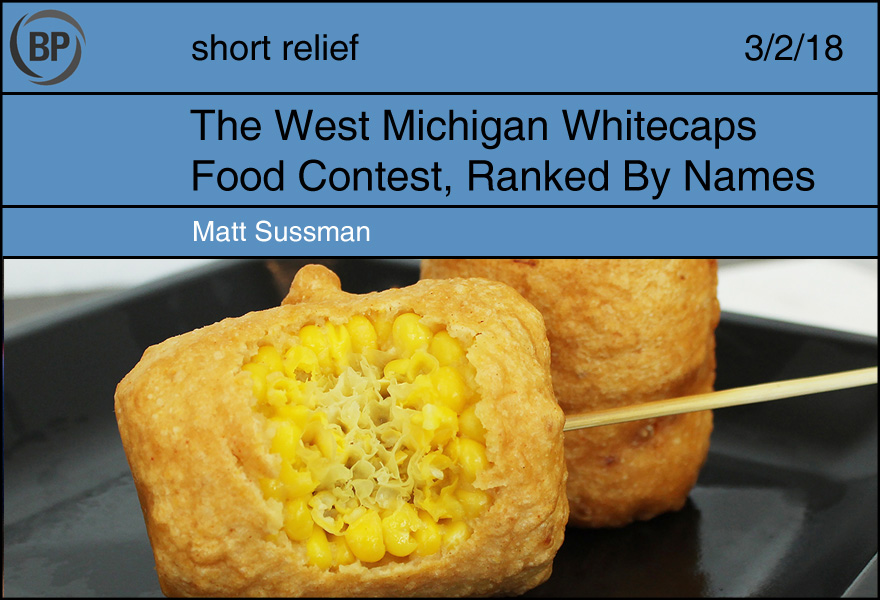 As we all know, stadium food can only be rated on two specific factors: wordplay and je ne sais quoi. It honestly doesn’t matter how it tastes, since you’re in a ballpark and you didn’t come for that. In the spirit of this low-stakes environment, the West Michigan Whitecaps have annually held fan food idea contests to come up with their new ballpark delicacy. Last year the winner was beer cheese poutine, which is basically what you make when you’re sandwiched between Wisconsin and Ontario.

We can eliminate two of the candidates right off: deep fried beer and mochi ice cream. Both sound fine, but they are not puns so they cannot possibly be good for the ballpark.

Here are the other candidates, ranked on a five-point scale:

Gator-Tators (loaded tater tots with alligator meat)
Wordplay: 4. Don’t need the hyphen, but that’s a great example of starting with a rhyming food and working backwards.
Je ne sais quoi: 3. I would be curious, but either way it’s one of those menu items I’m ordering exactly once.
Score: 7

Grub Glove (waffle cone with buffalo chicken and mac and cheese)
Wordplay: 3. It’s supposed to be “gold glove,” right? Well, it’s not a glove. That would be pita bread.
Je ne sais quoi: 1. I’m basically the_mac_and_cheese_liker logging onto the chat room so if I want M&C, I’m going to want copious amounts unencumbered by some snooty cone.
Score: 4

Heater With Some Meater (corn dog covered with Flamin’ Hot Cheetos)
Wordplay: 2. You tried, but what you could have tried was “flamin’ hot dog.” Or “hotter dog.” I’m not saying “Heater With Some Meater” in public.
Je ne sais quoi: 3. I’m intrigued, but more for the spicy girls and boys that choose to consume this, later being filled with regret and also spice.
Score: 5

Hey, Pita, Pita, Pita! (falafel and hummus pita)
Wordplay: 2. This one got workshopped too far off the mainland. I’d have gone with “Baseball Halal Fame.”
Je ne sais quoi: 2. Look, I’d try it because I enjoy some Greek or Middle Eastern at the ballpark to be quirky, but it just looks like a good sandwich, which has no business being here.
Score: 4

Johnny Brunch (basically a whole mess of meaty breakfast stuff wrapped into a waffle)
Wordplay: 4. Solid contact here. Brunch Rickey would have also been admissible.
Je ne sais quoi: 4. It’s very much a trainwreck that could destroy you by the fifth inning. It’s also basically a breakfast food you’re consuming well past your dinner.
Score: 8

Mr. Wing-suvius, the Wing-Ring Volcano (onion rings stacked with mac and cheese and chicken and bacon to make it look like a volcano)
Wordplay: 4. Man, they just went for it, didn’t they. Was Quesotoa too obscure?
Je ne sais quoi: 2. It’s a masterpiece in presentation but you know full well in practice this will look more like the Pompeii buildings that got wrecked by the volcano.
Score: 4

Fry Cobb (deep fried corn on the cob)
Wordplay: 5. Nailed it. And it even has batter and so was he.
Je ne sais quoi: 4. This is what I’ve been looking for as the secondary food item. Fries are weird at ballparks and popcorn or peanuts isn’t enough. Get a hot dog, a fry cobb and a soda.
Score: 9, and your winner according to the math.