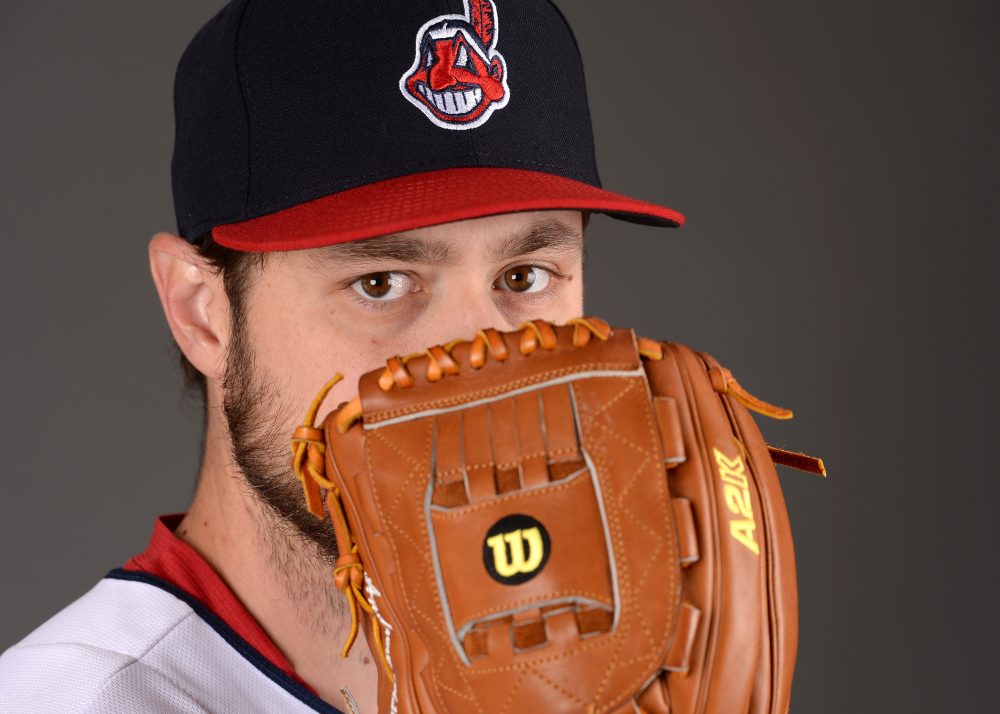 It wasn’t always All-Star games and World Series appearances for left-hander Andrew Miller, considered by many to be one of the best relief pitchers in the majors. A top prospect for the Tigers at 21 years old, Miller found himself dealt to the Marlins in a blockbuster trade for Miguel Cabrera in 2007, and unable to realize his potential. The Marlins let him go three years later, and only when the Red Sox switched him to the bullpen in 2012 did Miller begin to excel. Miller recently took a few moments with Baseball Prospectus to look back on his journey, touching on details related to baseball and otherwise.

David Brown: At some point, does your beard become like a hockey beard?

Andrew Miller: Nah, not really. I let it go, but when it gets a little unruly, I kind of trim it up. There’s no real pattern to it, I’m not attached to it. There’s no power in it or anything, that I buy into. You have to do some maintenance because you’ll start finding some hairs that are a little longer than others, that kind of stick out and what not. Every now and then, I’ll clean it up. It’s pretty cleaned up right now, actually. More manageable, more professional.

DB: So there comes a point when you can have too much hair?

AM: Oh, yes. Usually when my wife gets on me a little bit. If you have a couple of bad outings, everybody tends to get a haircut or shave. And when it gets hot, you’ll want to clean it up a little bit.

DB: You played for the Chatham (Mass.) A’s in the Cape Cod league. Did Freddie Prinze nail that role as a lefty in Summer Catch?

AM: As bad as that movie can be at times, it’s actually a pretty good synopsis of what happens in the Cape—which is a blast. I got lucky to end up in Chatham, it’s probably the best spot there is. Even so, there’s a whole lot in that movie that isn’t relatable.

AM: That right there? Yeah, I was trying to be gentle in case you were a friend of Freddy Prinze Jr.

DB: The internet claims that your favorite movie is Days of Thunder. Is that true?

AM: Haha. The internet likes to quote the media guide from my freshman year at college. If you were to go through our guide entirely, nobody took it very seriously. But … I do like Days of Thunder, it’s a great flick. It’s bad, but good. One of those movies from my childhood I got into. I like NASCAR and Tom Cruise, and it’s like a rip-off of Top Gun. So why not? There is Days of Thunder memorabilia around my house. My kid was playing with a Matchbox Days of Thunder car the other day. The Hardee’s car. Russ Wheeler.

DB: You’ve also been photographed wearing a “The Dude Abides” T-shirt. Are you a big Big Lebowski fan?

AM: Absolutely, how could you not be? It’s a classic movie, and that T-shirt is from a local Ohio company, so I felt like I needed that in my wardrobe. One of the top two or three movies on my list.

DB: Do you hate the bleeping Eagles?

AM: No, actually I don’t mind the Eagles. I want to catch Joe Walsh the next time he’s in Cleveland. I have nothing against the Eagles—despite what The Dude says.

DB: Does it make sense to you that The Dude wouldn’t like the Eagles? They’re so mellow. Maybe that’s why it’s funny.

AM: Right? He’s got all the Credence tapes. They’re somewhat similar.

DB: Who’s the most thorough and good man that you know?

AM: I’d have to go with Tito (Francona). He’s the leader of this bunch and a pretty good guy to follow.

DB: When are you most out of your element, like Donny?

AM: I’ve settled in pretty well now. I try to stay in my lane.

DB: Do you have a favorite beverage?

AM: No White Russians. Other than water, I like a good bottle of wine. My wife and I like to have it for dinner. We like to try different kinds, red and white. We’re learning more and more about pouring.

DB: You went to North Carolina. Your wife played soccer at Duke. That has to create some marvelous tension around your house in the spring.

Special delivery. Thanks @GoHeels for the championship gear and congrats again to the guys who cut down the nets. #GetIntoIt 🏀🐏 pic.twitter.com/yRHSygaZga

AM: Around NCAA basketball time, that’s the only time. Nobody cares about football, but watching those basketball games together, nothing goes over too well. When Austin Rivers hit that one shot a few years ago, that was a tough one for me. We like each other, probably, 363 days of the year. But those two days are tough, I’ll admit.

DB: When your true feelings for Coach K come out, is it nasty?

AM: My true feelings for Coach K come out all of the time. I let Trevor Bauer know—he’s a big Duke basketball fan—what I think of Coach K. He’s got a lot of accomplishments, though, and we can leave it at that.

DB: What about Duke-UNC baseball?

AM: I’ve converted her family, which is mostly full of people who went to Duke. Both of her parents are Dookies. But I’ve converted most of them to Carolina baseball. They’ll wear the St. Patty’s Day hat that’s not Carolina Blue. Proud of that.

DB: Was it intimidating being traded for Miguel Cabrera?

AM: I didn’t think about it at the time it happened, but at that point in my career with Florida, it definitely wasn’t the easiest situation. I had felt like I had just settled in with Detroit, getting to know people, and it was basically my first full season. And then I was uprooted again and had to go to a different place. There were a lot of reasons I wasn’t successful in Florida, and I wouldn’t say that’s near the top, but I don’t think it’s the easiest thing for young players to deal with a lot of times. At the time, I felt like it wasn’t a big deal, but looking back on it was an obstacle.

DB: You’ve obviously figured something out here, how to pitch. Is there any curiosity on your part in being a starting pitcher again?

AM: Nah. There’s times when I’m out there and I feel like I’m commanding the ball, and I think about how nice it would be to have four days off between outings and kind of get back into that schedule, but the grass isn’t always greener. I feel like I’ve figured out something that’s worked for me. At this point I just want to get better at what I’m doing, and help out a good team that has big things to accomplish. For me, that role’s in the bullpen.

AM: Everybody’s striking out more; nobody seems to care. There’s not a whole lot of two-strike approaches in the league. So if you throw strikes, guys are gonna strike out. Deep thoughts!

DB: You’re from Gainesville, Florida, so does that mean you know the Tom Petty catalog by heart?

AM: I know it pretty well, yeah. Being from Gainesville, he was probably the biggest star we have.

DB: And since you’re from Gainesville, are you required to help Tim Tebow become the best baseball player he can be?

AM: Haha. I’m actually impressed with how well he’s done, for whatever that’s worth. Growing up and watching him, he was a pretty easy guy to root for any reason. He certainly seemed like a very genuine guy who works his butt off. I wish him the best and I’m pulling for him no matter what he does. Yeah, he’s had a tough spotlight thrust on him which, for a lot of reasons, he’s shined on himself for his religious activity. But he seems like a pretty awesome guy and genuine guy. I’ve never met him, but every story I’ve heard from someone interacting with him, just raves about him and says he is the real deal.

DB: And you think he’s doing OK, all things considered?

AM: I am surprised that he can go out there and not completely embarrass himself. For a guy that hasn’t played since high school, who wasn’t, like, a major prospect then—someone who was just known for football—it’s impressive he has been able to go out there and hold his own. Shoot, making contact and getting base hits and hitting home runs, in any capacity, it’s something.

DB: You are known as “Andrew Miller.” Never “Andy.” Why not?

AM: That doesn’t bother me—I actually get it quite a bit. That’s fine. I think that was my parents intention.

DB: Years ago, when you were first coming up, I thought you might have been Australian because you remind me of Graeme Lloyd, who was a tall lefty actually from Australia. Is there anything Australian about you? Ever visited there?

AM: I’ve been to Outback a few times but that’s as close.

DB: What do you think Trevor Bauer is trying to accomplish with his ominous fleet of drones?

AM: That is a question for him, but I don’t know what he’s doing with those things, other than getting them stuck in trees. I know they get lost and damaged on a somewhat regular basis. Hopefully they somehow contribute to his success as a pitcher in the future. We’ve seen the alternative.

DB: Can you say “Corey Kluber” ten times fast without messing up?

Corey Kluber (sitting nearby): He can’t.

CK: That was way more than ten.

You need to be logged in to comment. Login or Subscribe
michael shavo
It is our most... modestly priced... receptacle
Reply to michael
Adrock
Stellar interview! Please bring us more of the same (or at least, similar).
Reply to Adrock
Terry Allan
Deep thoughts! Enjoyable read!
Reply to Terry
jimmac
Great interview, very funny!
Reply to jimmac
Robert Grace
The readers of BP demand more Answer Man! This was great.
Reply to Robert
Chris Pence
Fun. More, please.
Reply to Chris
David Brown
Thank you nice people. We will have more Answer Manses soon.
Reply to David