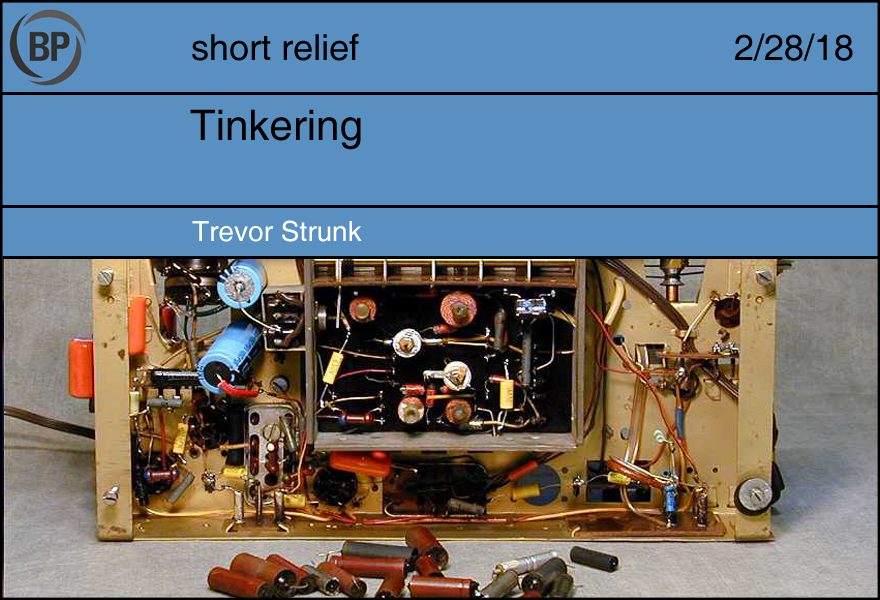 There’s a good reason so many dads across this nation love baseball: tinkering.

Yes, friends, tinkering — that old-fashioned pastime that your father and his father’s father, and his father’s father have enjoyed. You can find the dad of today in the garage, fiddling with a part that isn’t quite right for a project in the house. The dad of the 1920’s taking a flathead to the old Victrola. The dad of the 1840’s tinkering with a grizzly bear five miles into wilderness on the other side of the world.

And it’s not just men here — “dad” in this sense is a sort of catch-all. Women can be dads too, because women can love to tinker. I have a daughter, but even if I didn’t, I’d be a dad because I spent most of this evening trying to get a series of electronic relays going correctly. And, speaking even further to my bonafides, I failed miserably.

That’s Dad Tinkering though! There’s nothing that a good tinkerer believes more than, deep down in their heart, the whole process they are working on is bound to fail. Sure you might get a memorable success here and there: the jerry-rigged bungee-cord door that no one notices; the duct tape hiding an unlucky spot where your hand slipped and nicked the wall. But by and large, tinkering ends in failure.

And why not? It’s the journey that counts after all — the sense of adventure and innovation that comes from trying everything one possibly can to not take one more trip to Home Depot so long as they may live.

Baseball, of course, is like this process in almost every way: it defies basic logic; it ends almost every time in failure; it serves to frustrate and annoy family members; and it’s all about the journey. And not just for the dad-fan, but for the dad-player as well. It’s Spring Training after all, and everyone is tinkering on their deliveries, their swings, and their overall form. Even the players who are already fine will try a new pitch, or a new technique, because the spring is so long and they have to do something. Will any of it work? No of course not — and that’s what’s so great about it all!

So, this week I urge you, embrace your dad-side and dive in fully to the terrible beauty of Spring Training baseball, where the starters won’t ever start again, and every bench player is going to be Jose Bautista. You might find yourself getting the itch to open up that old record player to see if you can’t get her fixed, you old Dad you. 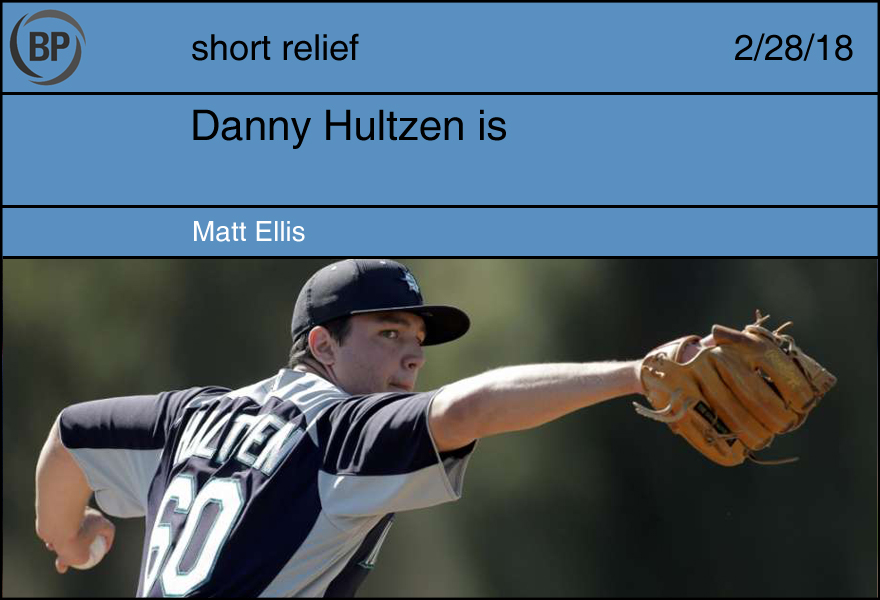 It happens every couple of seasons. He was, perhaps, a top prospect, a college standout. Maybe there were a few big-league seasons, or a shocking catch in the NLDS. You remember, but you forget, and then before you know it he’s back and you think wait, that’s right, and you hope he breaks camp on the 25 for the narrative as much as for the guy himself.

Then, a few responses. “Former Virginia ace Danny Hultzen eyes comeback as he agrees to terms with the Chicago Cubs,” for one. Or maybe “Cubs take flier on former first-round pitcher Danny Hultzen.” The framing is typically centered around precisely where the tragedy interlocks with the most inspiring narrative device: never made the bigs? Something something draft slot. Played a few seasons before shattering his legs? Seeks to inject new life into a position battle, or something like that.

Then, the editorials. The more straightforward entries perhaps find quotes from involved parties, the more emotional ruminate on what could have been while pointing forward, if not with a reasonable amount of trepidation. Fans of the players former franchise react in mostly optimistic tones. They remember the constant ouroboric spats with the DL, perhaps mourn more for themselves than that grimacing face adorning each update from the local Major City Newspaper Sports Section in years past. I really hope it works out for him, they think. Even if he throws ten innings, it will be a beautiful thing.

After a while, there are the Grand Philosophical Statements. It is perhaps a genre of thought more than prose, but it is as old as the farm system itself: you know, the Meaning of Not Quite Making it, the regret of the fallen chosen, the will to emerge from the ground and simply dust the dirt off their shoulders to claim every bit of sunlight as their own. They all end with the realization that even if he doesn’t reach the bigs, victory is nevertheless his: he stared defeat in the face and refused to squint, let alone blink.

Well, unfortunately, none of that is true. While I personally ran through all of these stages in my head upon reading that former Mariners’ number-two-draft-pick Danny Hultzen, he of the then-fabled best pitching prospect group in all of baseball, savior of a franchise finally steering its sails in the right direction, is eyeing a comeback with the Cubs this season, I think I realized that the real story is something entirely different.

Perhaps Hultzen will make his way onto a roster mid-season after his club suffers unexpected injuries. Maybe he will spend May in Iowa and then announce his retirement, for real this time. But the fact of the matter remains that Danny Hultzen was once one of the most exciting pitching prospects in the game, and now he is not. He was once 23, and now he is rapidly approaching 30. He was once this, and he was once that, but now he is none of those things and instead, he just is.

Some might argue that he can’t escape his past, that each pitch will be filled with seven years of meaning, each grimace haunted by the spectre of the scalpel. But the truth is that he already has. No: for Danny Hultzen is now stuck forever in his own present, arms extended in the wind as he is blown forward ceaselessly into a future that sits permanently behind his back. 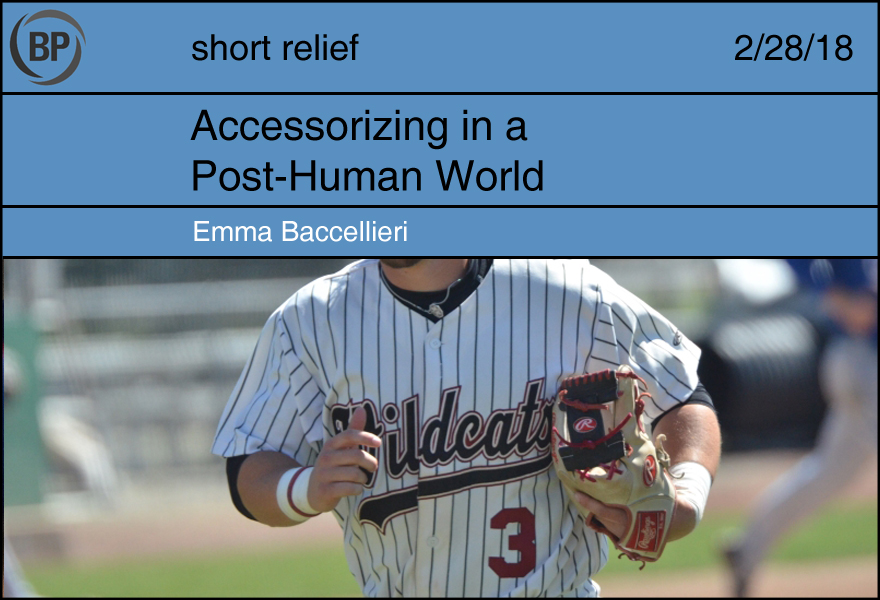 It was weird, sure, but the whole thing was weird—deliberately, extravagantly so. (Like, look at just one of the outfits linked above.) The room was made up to look like an operating theater, and baby dragons were involved, and the show was named “Cyborg” after a 1984 essay by the academic Donna Haraway titled “A Cyborg Manifesto: Science, Technology, and Socialist-Feminism in the Late Twentieth Century.” The New York Times declared the overall vibe as “dressing for the post-human world,” which sounds about right. Carrying around your own head is very post-human—or, at least, non-human—to say the least. This is the domain of the cyborg; it’s a natural, if extreme, conclusion of an environment with increasingly blurred lines between where technology has to begin for personhood to end. Any debate about the roles and rights of robots is, by necessity, a debate about the roles and rights of humanity. Maybe a head is a special and highly individualized symbol of what makes us human, maybe it’s just an accessory. Stick it under your arm and carry it around and see.

There’s something about the position that’s a bit like a ballplayer holding his glove at rest, folded up towards the crook of his arm. And then there’s the cyborg question as applied to baseball: logically, the glove is a concrete item physically separate from the player, yes, and so too is the head from the model. But is it? Isn’t it an extension of the player, sometimes—if he’s lucky—so thoroughly part of the player as to be indistinguishable from his arm itself? Should the player even want to be separate from his glove? There’s a point at which it’s not so much a tool as it is a shield, something eternally selfsame and comforting and his.

In a sense, the glove each player carries is his own head, both his identity and his robotic role in the procedural world of baseball. It’s only a matter of time before the latest fashion trend is waifish introverts hiding behind catcher’s masks.