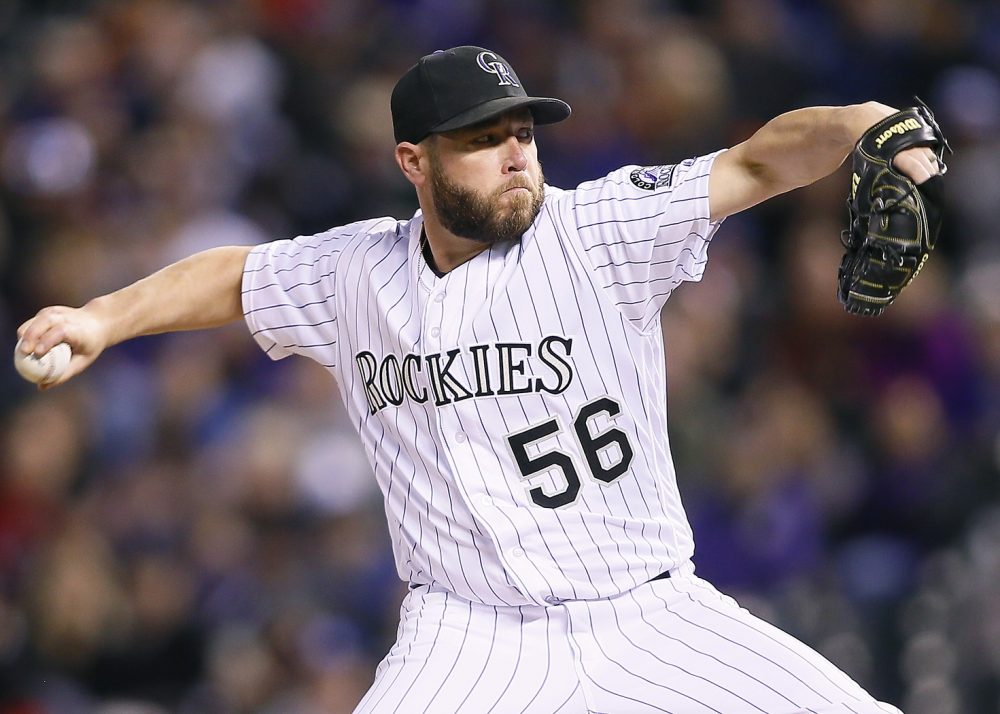 There are still upwards of 60 free agents left on the market. Several big names, including Jake Arrieta, Alex Cobb and Lance Lynn, remain unsigned. The issue may not be lack of interest, as Jon Morosi pointed out recently, but increased patience as teams wait for the asking price to drop.

The Angels aren’t in the mix for more starting pitching this spring, especially with Shohei Ohtani lighting up batters in camp, but they’ve been linked to free agent closer Greg Holland as a potential target. Holland, 32, is fresh off of his third All-Star season, during which he turned in a 3.42 DRA, 89 cFIP, and NL-best 41 saves in 57 1/3 innings with the Rockies.

The righty could supplant Blake Parker at the back end of the bullpen, though manager Mike Scioscia is still weighing his options for the closer role (and might not settle on one before Opening Day, either). No matter where he slots into the bullpen, Holland would undoubtedly strengthen a relief corps that ranked fifth-best in the league last year. It’s just a matter of finding a taker for his projected four-year, $50 million asking price—something that the Angels are hoping will continue to decrease in the weeks to come.

After a rash of injuries devastated their pitching staff in 2017, the last thing the Mariners need right now is another scare. Unfortunately, that’s just what they got on Monday afternoon, when a line drive glanced off of Felix Hernandez’s right forearm during a Cactus League game against the Cubs. The right-hander grabbed his arm and crouched in pain, eventually walking off the field with a trainer and returning to the team’s complex in Peoria for further evaluation.

The good news? X-rays returned negative, and it looks like Hernandez escaped with nothing more severe than a bruise. He’s day-to-day for the time being, with a chance (however slim) of returning to compete for Opening Day honors against lefty ace James Paxton.

It’s a lousy way to kick off what should be a bounce-back year for the 31-year-old—he lost significant time to the disabled list with multiple shoulder issues in 2017 and finished the season with a career-worst 3.96 DRA in 16 starts and 86 2/3 innings. To add, well, injury to injury, fellow Mariners righty Erasmo Ramirez is also slated to miss some time after sustaining a minor lat strain last week. Here’s hoping the club can avoid cycling through another 17 starters this year.

Andrew Bailey is hanging up his glove for good this time. The two-time All-Star and 2009 Rookie of the Year announced his retirement on Instagram, a decision that closes out eight years at the big-league level.

Bailey dominated from the get-go, securing a Rookie of the Year award and his first All-Star nomination with excellent command, a potent fastball-cutter combo, and a 1.84 ERA during his first campaign. As untouchable as he looked on the mound, however, he was dogged by relentless and varied injures off of it: a microfracture in his left knee, loose bodies in his right elbow, a right forearm strain, a left lat strain, a UCL tear in his right thumb, a right labrum tear, and a left hamstring strain, among others.

In 2017, the 33-year-old righty labored through just four innings in the majors before succumbing to a season-ending shoulder strain in April. While Bailey’s ability to resuscitate his career was in jeopardy long before he announced his retirement, this won’t be the last the Angels see of him. According to Pedro Moura of The Athletic, the right-hander is expected to transition to the club’s front office in 2018, where he’ll take over as the official instant replay coordinator and coaching assistant.