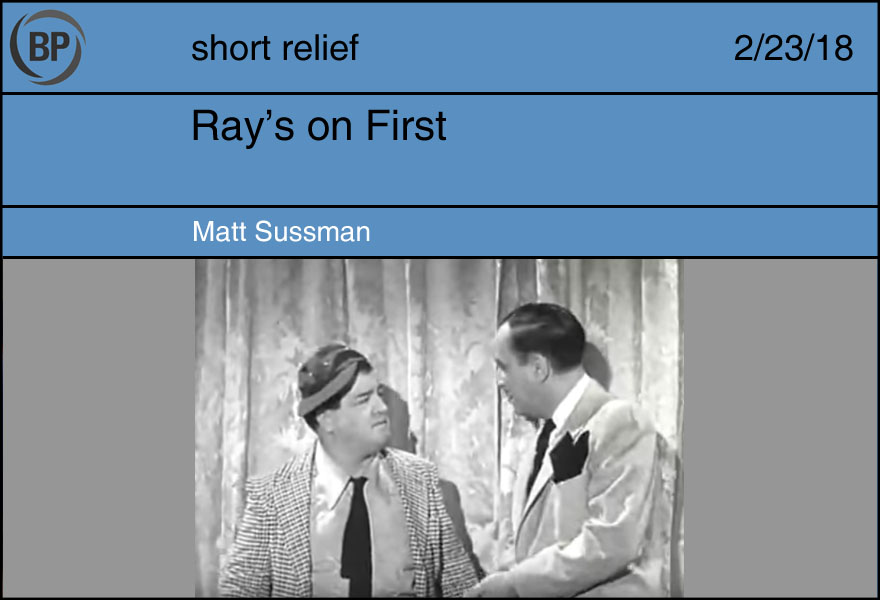 ABBOTT: Costello, I’m happy to announce that I’m going to work with the Tampa Bay Rays baseball team as a coach. We’re very excited about the season.

COSTELLO: Tampa, you say? I bet you know all the ballplayer names.

ABBOTT: [brief panicked pause] Of course I do. A good coach knows all his players’ names.

COSTELLO: Then I bet you can tell me all the players names!

ABBOTT: [longer, but unremarkable pause] I wouldn’t be a good coach if I didn’t know all the players names.

COSTELLO: Then tell me this, what are the names of the players on the infield?

ABBOTT: Well, we have a great infield. Lots of talent all around the horn. Probably some All-Stars in the lot, I imagine.

ABBOTT: I’m sure you are. It’s nice to know the names. It helps build a fanbase. And you’re going to know them all very soon.

COSTELLO: Good, because I was just asking you who—

ABBOTT: And you’ll learn them in due time. It’s a process. The current business atmosphere of professional sports requires teams to sometimes be creative, especially when the free agent market doesn’t turn out the way we expected it to be. You also have to consider who else is in our division and what they are doing and have already done.

COSTELLO: So, what’s the name of the shortsto—

COSTELLO: It’s a process to tell me the name?

ABBOTT: Part of building a successful team is looking at all the pieces and figuring out what works and what doesn’t. It doesn’t happen overnight. And I’m sure you’ll be with us every step of the way.

COSTELLO: Okay, do you have a pitcher?

COSTELLO: How about the outfield?

COSTELLO: And who are the other two?

ABBOTT: The great thing about baseball that I’m excited for is working with players and putting them in positions to succeed. There are going to be some growing pains but we’re going to put together a competitive team and win some ball games. What I can tell you is that you’re going to learn some of their names very soon. 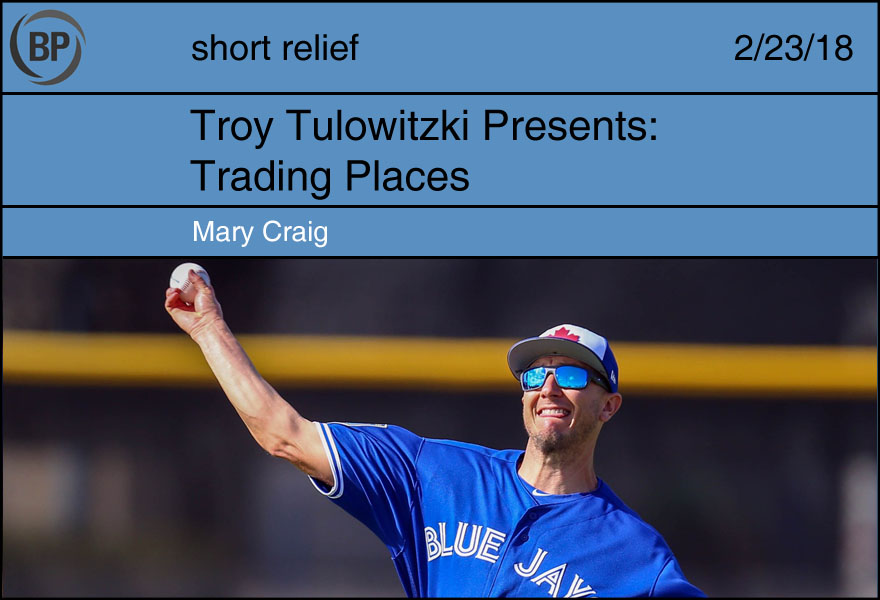 Troy Tulowitzki has spent all but four games of his professional career at shortstop. There’s no doubt that he loves the position, but as prone to routine as the human animal is, there is still a yearning for innovation and freedom from the constraints of life. Perhaps that is why Tulowitzki did not correct the poor photographer who assumed he was a pitcher; for these few moments, he got to be somebody else, to live a completely different life before returning to the safety of reality.

Regardless of Tulowitzki’s motive, he joins a long tradition of players using Spring Training to swap parts of their life, however briefly, for something novel.

The earliest years of baseball, when necessity commanded versatility, teams would routinely try out players at every position to ensure general competency. As players became more specialized and playing baseball became a more legitimate job, this need to build up versatility waned. Instead, teams, now comprised of players from across North America, gathered on rainy days in the spring months to swap offseason tales with their rivals, replacing a knowledge confined to the baseball field with one less easily encapsulated.

As the emphasis on conditioning increased, and Spring Training became more crucial to construction a team and a season, the swapping of positions returned. In 1969, San Francisco Giants coach Charlie Fox, who frequently employed the strategy, took it to its limits when he had each minor leaguer in camp switch positions for a day. Outfielders became pitchers, catchers traversed the outfield, pitchers guarded the infield, and infielders protected home plate. No doubt this strategy was both far more humiliating and productive than Tulo’s time as a pitcher, but despite the team’s relative success, Fox’s methods never caught on with other teams.

As much as Spring Training has developed into a series of routines designed to assist the players perpetuate these routines throughout the season, these first few weeks still lend themselves to unpredictability. We don’t know whether today awakened in Tulo a yearning to pitch, whether it will inspire a manager to harken back to the Charlie Fox method, or whether this season’s swappings will migrate further afield than they did in 1973 when Fritz Peterson and Mike Kekich swapped families. All we know is that we’re finally able to swap the bleakness of winter for the brightness of spring.

You need to be logged in to comment. Login or Subscribe
oldbopper
Simply great!!! I have been listening to "Who's on First" for a lot of my 76 years and it still has me ROFL.
Reply to oldbopper