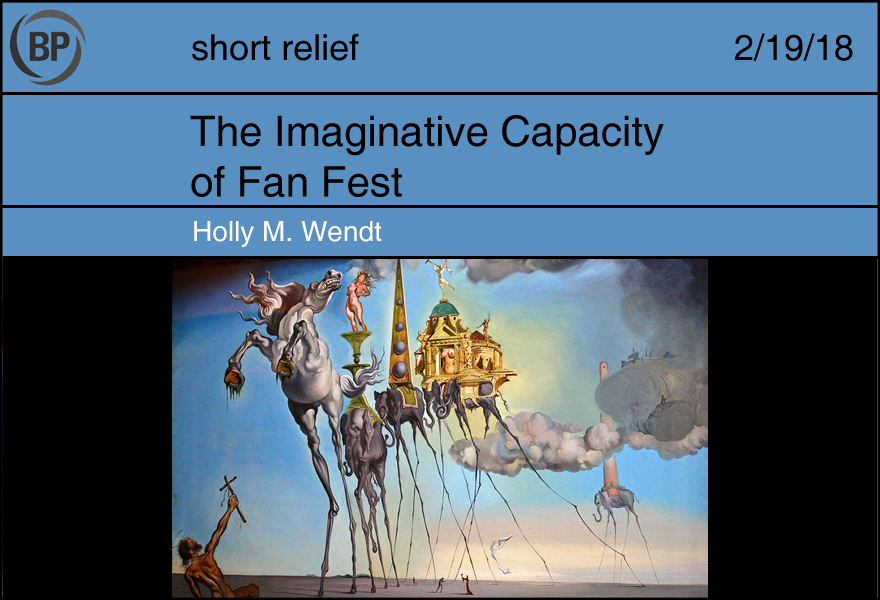 Recently, as part of their Fan Fest activities, several members of the San Francisco Giants engaged in an imitation game, emulating their own teammates’ batting stances and pitcher’s mound presences.

As the introductory music reels out, Brandon Crawford trundles to the plate, head down and hangdog. In a little while, his act will be identified: here arrives Brandon Belt—to take and to take, one pitch after another, in quiet contemplation. But now the footage must cut to the truly festive: Andrew McCutchen, now holding an orange bat, asking if the opportunity to imitate Hunter Pence remains.

The voices behind the camera assure him: “You can do anybody you want.” This is Fan Fest. There are no limitations.

There are, of course, expected candidates for imitation—anyone with a tic or a tiny eccentricity is fair game. Jeff Samardzija takes up Corey Gearrin’s obsessive watch of second base. Sam Dyson hunts fruitlessly for Johnny Cueto’s center of gravity.

McCutchen, though, steals the show, not only because Hunter Pence’s endless twitchiness and mechanical impossibilities invite it, but because McCutchen embraces the activity; he narrates, he emotes, he ratchets his eyes wide and blinking. He takes to the plate, thumps some imaginary ball with Pence’s looping hack, and gangles toward first. Pence himself takes part, too, undertaking the elbow-patting and bat-waggling of Brandon Crawford. In all, it’s a minute and a half of frank delight, a levity desperately needed.

But still: I like to believe there’s another cut of the video, one in which the Giants really take the admonishment to heart. You can do anybody you want.

Sam Dyson buttons the top button on his shirt. His radio crackles. There are young people in the arcade, and one of them has flagrantly tossed a very small basketball after beating a friend’s high score on Hoop Fever. He says, “I’m on my way,” and steps onto his Segway.

Jeff Samardzija stands with an ocelot in his mitt, his cheek atop its spotted head. He’s shaved his chin for this, so dedicated he must be to the art. The clock hanging on the wall falls limp and begins to sag. Brandon Belt feels his legs stretch still more until he’s impossibly tall, spindling and yet strong enough to bear all the world’s treasures. There’s pine tar in the pitcher’s mustache. The ocelot stretches. A lobster drags a bat in one claw.

In a museum the other day, I happened upon a picture I didn’t know about: the great photographer Garry Winogrand’s portrait of Jackie Robinson, taken in Robinson’s home in Connecticut in 1961. It’s a marvelous shot. Winogrand “catches” the baseball Robinson has tossed up in midair; his subject’s eyes, lifted to follow it, seem to be waiting for a question he’s asked to come down as an answer.

There are books on the shelf above him. Some look like sets of reference volumes, in thousands of which, of course, Robinson himself is an answer, an enduring name for all time. A few others look like they’re about to fall on him, a kind of sword-of-Damocles peril hanging like history over his head. And what is that thing on his extreme right, cut off at the margin? A Chinese doll in a vitrine? This is the curious and touching element of the shot: the punctum, as the philosopher Roland Barthes calls it in his jewel of a book, Camera Lucida.

In 1961, Robinson was not far removed from having supported Richard Nixon’s first presidential campaign. Robinson had thoughtfully arrived at this cognitively dissonant (to most modern eyes) political decision, although he later came to regret it. He was a far more complicated man than our popular historiography generally allows him; more complicated even than some of the acknowledged complications. As John Gregory Dunne put it in the New York Review of Books, “In the making of a national myth, his complications have been revised into virtues.”

Robinson’s 100th birthday is next year. It falls on the day before Black History Month begins, a convenience that will be as eagerly exploited as ever: Jackie bought and sold, a collectible in a glass case. But he refuses to stay there. “I cannot stand and sing the anthem,” he once wrote. “I cannot salute the flag.” So much hasn’t changed. The ball is still in midair. He’s still waiting for our answer.