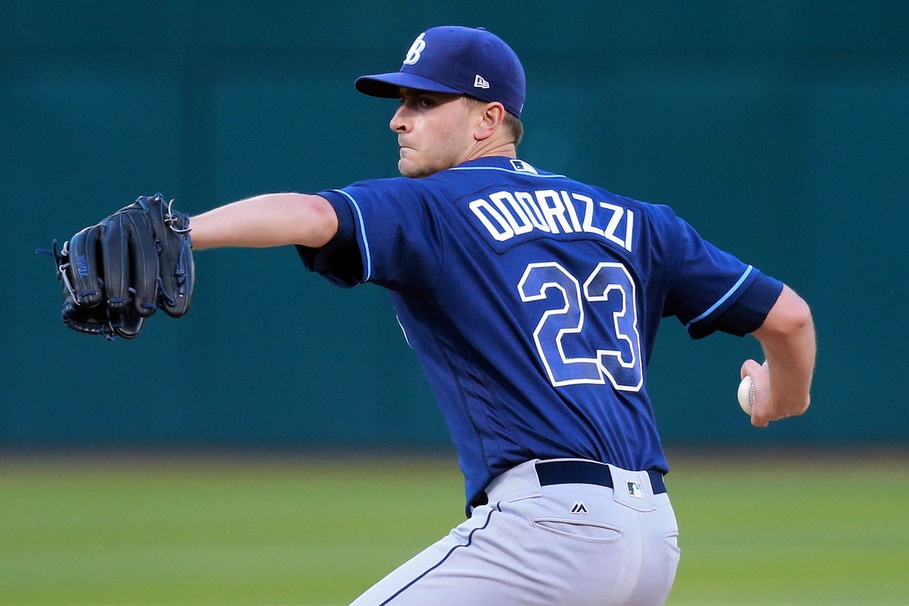 This has been a busy offseason for the Twins, but one of their biggest moves went mostly under the radar. Back in December, they hired Rays director of pitching research and development Josh Kalk, whose early work with PITCHf/x data for The Hardball Times got him hired by Tampa Bay in 2009. Kalk became known as a pitching guru, receiving a lot of credit for the Rays’ development of young arms and frequent ability to get value out of scrap-heap veteran pickups. Given that reputation and in-depth knowledge of Rays pitchers, Kalk’s arrival in Minnesota gave added weight to Chris Archer and Alex Cobb rumors. Instead, the Twins snagged a different Rays right-hander in Jake Odorizzi, whom Kalk and company acquired from the Royals as a 22-year-old top prospect in 2012.

Odorizzi showed lots of promise early on in Tampa Bay, posting a 3.75 ERA with 346 strikeouts in 375 innings through his first two-plus seasons, but since then his development has stalled. He’s now 28 and last season was his worst in the majors, with a career-low 21.0 percent strikeout rate, a career-high 10.1 percent walk rate, and 30 homers allowed in just 143 innings while dealing with back and foot problems. Odorizzi was still a slightly-above-average starter—4.14 ERA, 4.70 DRA, 1.4 WARP—but any view of him as a pitcher on the rise has lost most of its steam. Of course, few teams had a more obvious need for slightly-above-average starting pitching than the Twins, who will take on Odorizzi’s modest $6.3 million salary for this season and also control him for 2019 via arbitration.

Odorizzi slides into the third spot in the Twins’ rotation, behind Ervin Santana (once he returns from finger surgery, likely in May) and Jose Berrios, and ahead of Kyle Gibson and Adalberto Mejia (plus reclamation projects Phil Hughes and the newly signed Anibal Sanchez). However, because Odorizzi’s salary increases Minnesota’s payroll to just $110 million or so, there’s still a chance that the Twins will continue to shop for rotation help. They should have more money to spend, even in the most conservative estimate of their projected payroll, and there’s still plenty of room for improvement. For now, though, Odorizzi gives the Twins a solid mid-rotation starter, for this year and next, and the cost to acquire him was minimal in terms of both money and talent.

BP’s prospect team ranked Jermaine Palacios just outside of the Twins’ top 10 prospects, praising him as a “plus defender” at shortstop “with a relatively high floor” at age 21, but projecting him as a “second-division regular” or utility man due mostly to questions about his bat. He hit .320/.362/.544 in 62 games at low Single-A to begin last year, but then hit just .269/.303/.359 with an ugly 53/10 K/BB ratio in 62 games at High-A following a mid-season promotion. He’s a solid prospect and has a decent chance to reach the majors, but Palacios is no better than the Twins’ fifth-best 25-and-under shortstop—behind current MLB starter Jorge Polanco and top-five prospects Royce Lewis, Nick Gordon, and Wander Javier—and seemingly lacks the type of upside to haunt Minnesota.

As for Odorizzi’s remaining upside, that’s tougher to get a handle on. Nearly all of his numbers trended in the wrong direction last season, he couldn’t have picked a worse time in baseball history to be one of the game’s most extreme fly-ball pitchers, and back problems are always worrisome. On the other hand, even in a career-worst year Odorizzi was still a decent starter, his velocity remains largely unchanged, and his five-pitch mix (four-seamer, cutter, splitter, curveball, slider) leaves room for tinkering because they’ve each been an above-average offering, just never all in the same season. Odorizzi is also noteworthy in that he’s had extreme reverse splits, faring better against lefties than righties, every year.

For his career, Odorizzi has held left-handed hitters to a .221 batting average and .651 OPS, which is the seventh-lowest mark among the 116 right-handed pitchers to face lefties in at least 1,000 plate appearances since 2012. During that six-year span, the only right-handers with more success than Odorizzi versus lefties are Stephen Strasburg, Sonny Gray, Jake Arrieta, Justin Verlander, Michael Wacha, and Garrett Richards (and the four names directly behind Odorizzi on the same list are Felix Hernandez, Jacob deGrom, Johnny Cueto, and Zack Greinke). That’s great company, and speaks to the effectiveness of Odorizzi pairing high fastballs and low splitters to lefties. Most righties who shut down lefties like Odorizzi has are front-line starters, but most of them aren’t nearly as vulnerable to righties.

Whereas his .651 OPS against lefties is seventh-lowest among those 116 pitchers, his .763 OPS against righties ranks 101st. And this time the company surrounding Odorizzi includes Ricky Nolasco, Kevin Correia, Edwin Jackson, Vance Worley, Kyle Kendrick, Jerome Williams, and Mike Pelfrey. Neither his fastball nor his splitter have been weapons versus righties and Odorizzi’s most effective offering to same-sided batters, a low-80s slider, is not a pitch that he’s felt comfortable leaning on heavily for whatever reason. There’s an opportunity for the Twins to alter Odorizzi’s pitch mix and perhaps coax his numbers against righties closer to his numbers against lefties, but then again Kalk was no doubt already trying to do that while with the Rays.

If nothing else, a right-hander who pitches like a no. 1 starter against lefties and a no. 5 starter against righties is weird and intriguing, and on the surface at least leaves room for improvement by way of adjustments in repertoire and approach. Since taking over as Minnesota’s front office duo 16 months ago, chief baseball officer Derek Falvey and general manager Thad Levine have repeatedly stressed the importance of connecting analytics, scouting, and coaching so that all three parts of the organization are on the same page, working in concert. Odorizzi is seemingly a prime test for whether the Twins’ new regime has accomplished that yet, because he’s a good pitcher who forever seems to be a tweak or two away from being a very good pitcher.

You need to be logged in to comment. Login or Subscribe
John Collins
Thanks for such a prompt and insightful write-up. Aaron.
Reply to John
James Flagg
Ok, I’ll say it.....this seems like an exceedingly light return for a potential mid-rotation arm, despite many of his indicators trending down. Probably 20 teams have a Palacios-level prospect just lying around as surplus, and probably could have tossed in another interesting C+ or two as well....can only think teams either didn’t see him as an upgrade to what they had at that price point, or to feed the conspiracy theories - would rather throw out a cheap rookie AAAA guy to be sure their tank job worked. Seems like a steal for the Twins, even if Odorizzi bombs.....
Reply to James
jfranco77
6.3m this year, and control for 2019, so basically a team option for 6-7mil if he's bad and 10-12mil if he's good. Plus a C+ prospect. That does seem preferable to paying Lance Lynn.
Reply to jfranco77
jfranco77
Thoughts on the HR park factors in MIN vs TB? Target looks like it should be a pitchers park but BP has it as 108 HR for RHB and 104 HR for LHB, compared to 101 for RHB and 89 for LHB in Tampa. Pitching in a terrible division and not playing for a team who plays 57 games in BAL/NYY/TOR should help the surface numbers at least.
Reply to jfranco77