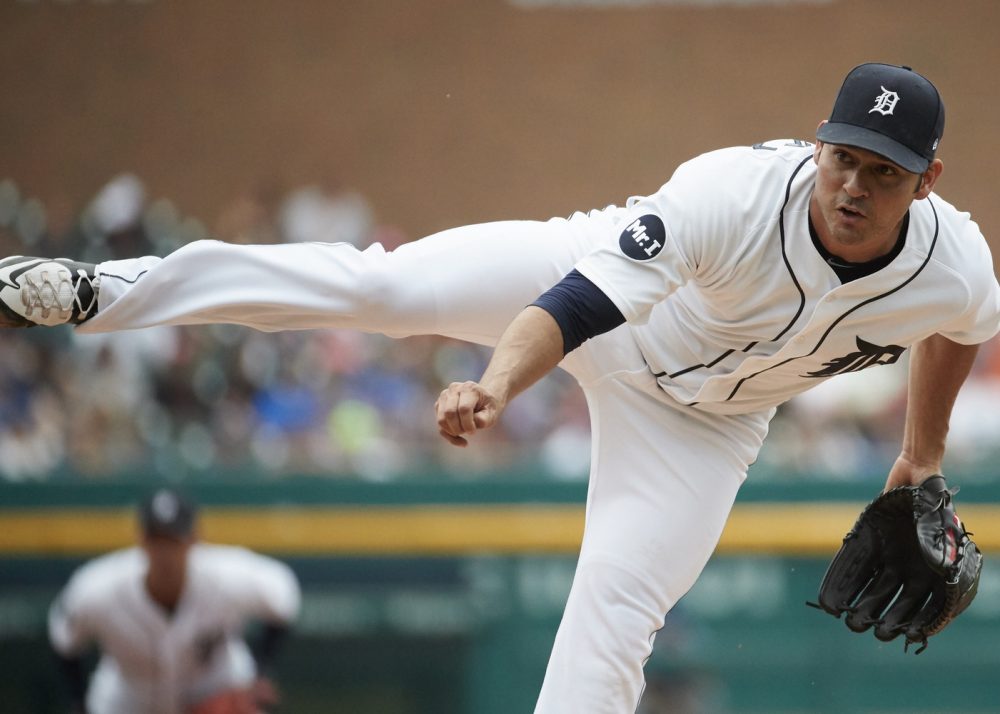 Twins director of baseball operations Daniel Adler is an upcoming guest on my “Gleeman and The Geek” podcast. We recorded a 90-minute chat early Friday evening, at a tap room in Minneapolis. When he showed up, I’d been too busy setting up the recording equipment (and drinking beer) to have checked Twitter, so just before starting the show I jokingly asked: “You haven’t signed anyone in the last half-hour, right?”

I expected a polite chuckle, but instead Adler gave me the weirdest look, like I’d correctly read his fortune. It turns out the Twins had signed someone, literally minutes earlier, inking 34-year-old right-hander Anibal Sanchez to a one-year contract with some interesting terms. While technically being reported as a one-year, $2.5 million deal, Sanchez will receive just $615,000 if he fails to make the Opening Day roster. It’s a partially-guaranteed contract, similar to one-year deals signed by arbitration-eligible players.

If he does make the team, Sanchez will be guaranteed $2.5 million and can earn another $2.5 million in incentives. It’s a major-league contract, because he gets a 40-man roster spot, but it somewhat resembles a minor-league deal in that the Twins could easily release him without much thought if he struggles in spring training. And it’s important to view the Sanchez signing through the correct financial details, because … well, he’s been terrible for the past two seasons and hasn’t been an above-average pitcher since 2014.

Sanchez had an excellent five-year run from 2010-2014, throwing an average of 180 innings per season with a 3.43 ERA. In the middle of that run, after the 2012 season, he signed a five-year, $80 million deal with the Tigers that was the third-largest of that offseason behind Zack Greinke ($147 million) and Josh Hamilton ($125 million). Sanchez won the ERA title in the first season of that contract, throwing 182 innings with a 2.43 ERA as Detroit won 93 games and advanced to the ALCS, and he had a solid second season with a 3.43 ERA in 126 innings.

Then it all fell apart. Sanchez was bad in 2014, very bad in 2015, and horrible in 2016, posting a combined 5.67 ERA in 416 innings during that span. He was so awful that I’d mentally ruled him out as a free agent worth keeping tabs on this offseason. And now I’m in the position of trying to figure out what the Twins see in Sanchez, although realistically they don’t have to see much in a formerly good pitcher to make a $615,000 investment, particularly after news that no. 1 starter Ervin Santana will likely be sidelined until May following finger surgery.

I still expect the Twins to acquire an impact starter, either via free agency (Jake Arrieta, Lance Lynn, Alex Cobb) or trade (Collin McHugh, Patrick Corbin, Dan Straily, Jake Odorizzi). It’s possible signing Sanchez signals that they no longer expect to make that sort of addition, but a) that would equate to a tremendously disappointing offseason for a team that set out to upgrade the rotation, and b) it seems much more likely that Sanchez is meant to be a short-term replacement for Santana with some potential to pitch his way into a season-long role.

That job description, along with a $615,000 commitment, is a low bar, but can Sanchez clear it? Maybe. I’m certainly not betting on a resurgence—and neither is PECOTA, projecting him as a replacement-level pitcher for 2018—but there are reasons to think Sanchez still has some gas left in the tank. (More likely he’ll be flammable again, but let’s try to keep an open mind.) On a per-inning basis from 2015-2017, no starter allowed more homers than Sanchez, who served up 85 in 416 innings. That’s obviously not a good thing, but it does at least pinpoint an obvious, massive weakness if the Twins are convinced they can fix it.

Setting the hideous homer rate aside—just for a moment, we’ll come back to it—Sanchez actually had some solid peripheral numbers last year. He made 17 starts for the Tigers, striking out 82 and walking 20 in 84 innings. To put that in some context, the only Twins starter with a better strikeout rate was Jose Berrios and the only Twins starter with a better walk rate with Bartolo Colon. If attached to anything resembling a normal home run rate, an 82/20 K/BB ratio in 84 innings would be promising. But is there any reason to believe that Sanchez is capable of even approaching a normal home run rate at this stage of his career?

For much of his career, Sanchez was actually one of the best starters in baseball at preventing homers. In his first two full seasons with the Tigers, he allowed a total of just 13 homers in 308 innings, and combined from 2006-2014 he allowed an average of 16 homers per 200 innings. During that nine-season span, the only pitchers with more starts and a lower homer rate than Sanchez were Clayton Kershaw, Adam Wainwright, and Tim Hudson. Things have changed, obviously. Last season, Sanchez allowed more homers in one game (five, against the Orioles on August 6) than he did in the entire 2014 season (four, in 126 innings).

Sanchez has lost a couple miles per hour from his peak, which is to be expected from a veteran with his injury history. He’s also become one of baseball’s most extreme fly-ball pitchers, with his ground-ball percentage shrinking from 46 to 40 to 39 to 36 since 2014. His splitter/changeup remains a strength, inducing whiffs and weak contact, but every other pitch in Sanchez’s extensive repertoire got clobbered for the past two seasons. According to Brooks Baseball, opponents hit .240 and slugged .380 off his splitter/changeup, compared to a .314 AVG and .553 SLG off any other pitch. He has not enjoyed the fly-ball revolution.

Even while being knocked around Sanchez has managed perfectly solid strikeout and walk rates, his splitter/changeup remains a plus pitch, and he finished an otherwise forgettable 2017 with four good starts down the stretch (2.74 ERA, 31 strikeouts, one homer in 23 innings). Those are reasons for optimism, or at least not pessimism. Clearly the Twins see something beyond that, however. My guess is that Adler and the analytics department feel Sanchez could really benefit from a tweak or two, trimming his five-pitch mix down to 3-4 pitches, focusing much more on his splitter/changeup, and perhaps altering his fastball somewhat.

They’re basically hoping that if they can stop Sanchez from giving up moonshots every four innings, there’s still a passable back-of-the-rotation starter under the rubble left by back-to-back disastrous seasons, not unlike the Twins grabbing Bartolo Colon off the scrap heap last July. I’m skeptical, to say the least, but the price is certainly right, there’s very little keeping the Twins from simply parting ways with Sanchez a month from now if he doesn’t impress, and even if he does make the team they may only need him for a handful of starts before Santana rejoins the rotation.

Fans would have every right to be furious if this proves to be the Twins’ only rotation addition of the offseason, but for now the assumption should be that Sanchez is merely the move before the real move. And it’s an intriguing one.

You need to be logged in to comment. Login or Subscribe
Anthony Worrall
Surely won't make the rotation?
Reply to Anthony
Aaron Barbara
File charges for arson. We have found the gas can.
Reply to Aaron
frankromanojr
I’m on a quest for answers. Why is Stephen Gonsalves not getting more attention as a candidate for the Twins rotation in 2018? Is it that he’s being overlooked by outsiders, or is there information on why the Twins are not considering him? They just signed Anibal Sanchez, wtf! And now the trade for Odorizzi (although for next to nothing which is a win for MIN). Is Gonsalves worth a look even in AL only keeper leagues?
Reply to frankromanojr
csrsen
I would guess two reasons: 1) service time / team control issue. 2) They want to ease him into a starting role, not placing too much pressure on him by putting him on the Opening Day roster. I bet we see him by June.
Reply to csrsen