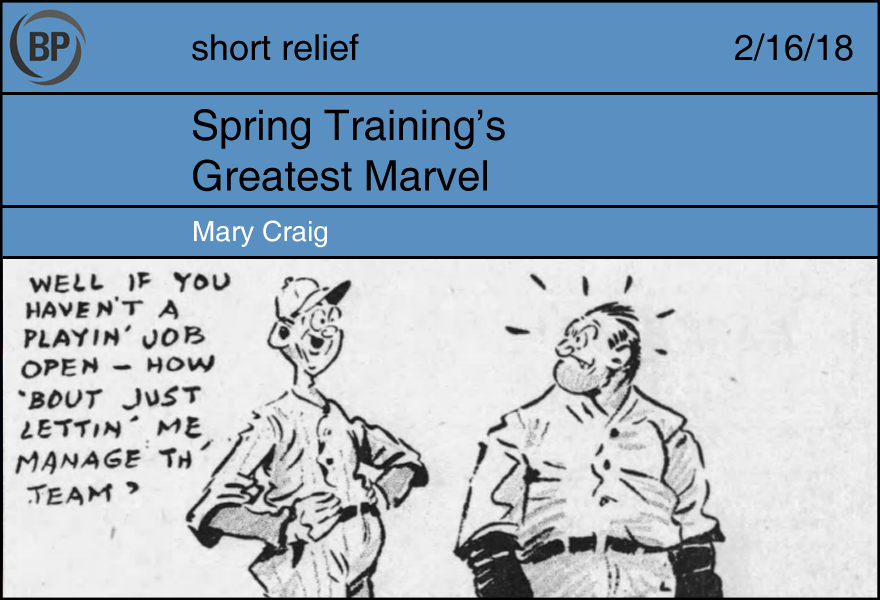 By the end, it was difficult to tell whether it had merely become routine or if there was a part of him in which hope still resided. Many argued the former, positing his demand for bus fare in the latter years meant he had gone soft and treated these several weeks in April as a vacation rather than a job interview. A far smaller contingent insisted his efforts were genuine as evidenced by his willingness to try out for minor league teams. It was precisely this ambiguity, though, that made Lou Mandell, baseball’s “All-American Rookie,” such a marvel.

Each spring, he arrived with barely $2 to his name, bringing only a tattered uniform, a yellowed glove, a second-hand pair of spikes, and one spare set of clothes, all shoved into a tiny bag covered in layers of dust accumulated from each state through which he had travelled. But he always insisted that he arrived with far more than those possessions; he had gained muscle, an electric new pitch (either the screwball or the corkball), and the sense that this would finally be his year.

Yet each spring went exactly as the previous. When it became apparent he could barely throw the ball far enough to reach home plate, he insisted his true talent lay in patrolling the outfield. When that, too, was disproved, he cheerfully packed his bags and hitch hiked to the next spring training complex where he was greeted by yet another manager well-versed in his ways.

In his decade visiting Spring Training, from 1932-1942, Lou Mandell never lasted more than three days with any particular team. Yet he formed great bonds with players and coaches who relished the opportunity for even day to break the monotony of Spring Training. He loosened up even the most tightly wound in the profession, throwing BP to Phillies’ manager Jimmy Wilson, posing for photos with Babe Ruth, and causing Kenesaw Mountain Landis to burst into a fit of laughter after being asked to declare him a free agent in order to increase his stock. Wherever Lou went, he attracted the attention of his hopeful colleagues.

In 1943, Spring Training was contained to places no farther south than Mississippi, and the 47-year-old Lou found himself unable to attend, finally bringing his decade-long quest to its conclusion. Columnists across the country mourned the end of the “eternal rookie,” who was “always trying and always failing,” perhaps understanding that baseball as it had been for the past decade had also reached its end, brought about by the war. For several years, Lou lived on in these writers’ columns, until he, too, gave way to new routines, new failures, and a country that forged ahead without reference to the past. 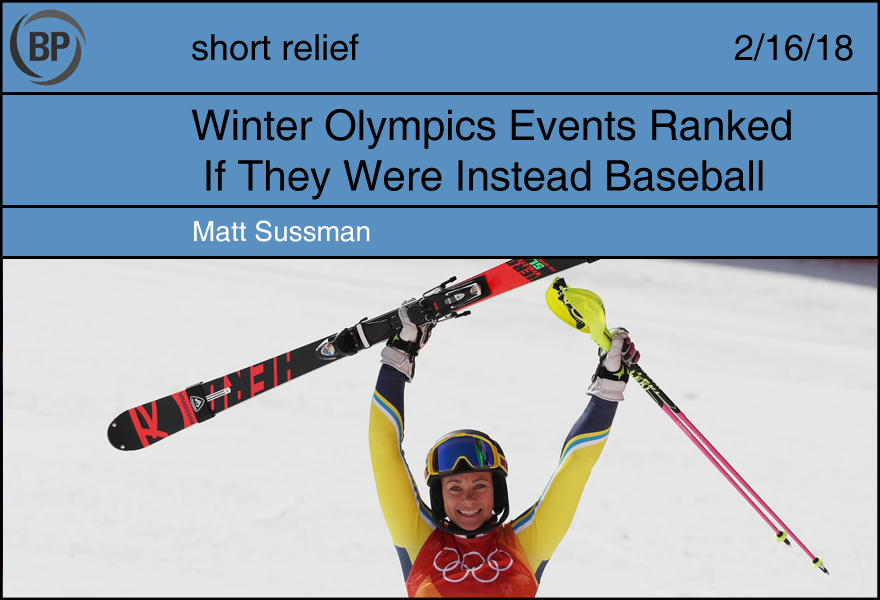 10. Biathlon. Ski for a while, then try to throw a strike. The Twins already do this and it’s not fun.

9. Figure skating. At long last, the judges can finally ask for that Yankees-Dodgers World Series every year.

7. Cross-country skiing. A long endurance test that’s kind of fun to watch only at the end, also known as an American League East game.

6. Ski jumping. This is basically the Home Run Derby but for losing your mind.

5. Nordic combined. As it’s a combination of the above two, then this is an AL East Sunday night game.

4. Hockey. Catching enthusiasts unite, this game has everything you want, including the winning team being the one with the fewest passed balls.

3. Snowboarding. Teenagers from just two places, Colorado and Norway, shredding over the halfpipe to rob a home run.

2. Luge/Skeleton/Bobsled. Players toss a baseball down a sled and see how long it takes to get to the bottom. Just thousands of people just cheering’ over a ball rollin’ down a sled. 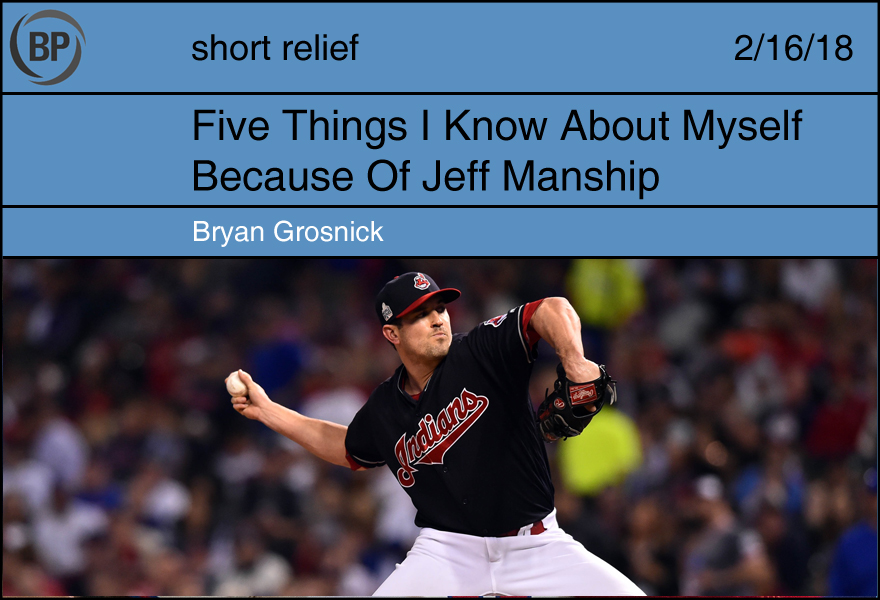 1.
I know that I invest significant energy into analyzing teams’ non-roster invitees, because I heard that Jeff Manship had agreed to a minor-league deal with the Cincinnati Reds and immediately got excited. After pitching in Korea last year as a starter and excelling in the Indians’ bullpen for a brief while, this former swingman could once again be a decent part of major-league bullpen.

2.
I know that I get too excited about minor moves, because I insisted to my co-hosts that we talk briefly about Jeff Manship on an episode of the DFA Podcast. They humored me, as co-workers often do, and politely chose not to laugh at me when I claimed he could make a difference on a team that has no hope of contending this year. Were Manship to earn a spot in the Reds’ ‘pen, it’s unlikely that he would’ve had much of an impact on any point of the 2018 MLB season. I know all of this, but I still cared.

3.
(I know that I spend too much time on baseball Twitter, because I once participated in a long thread coming up with alternate surnames for Jeff Manship, including “Guyraft” and “Malebarge” or–my personal favorite–“Dudeboat.”)

4.
I know that I have some ego about my baseball analysis because yesterday Jeff Manship failed his physical and now I won’t have my chance to be proven right. I wanted to see him win six games in relief and post a DRA above the league average and then I could hang my hat on that. I could have predicted the future and at least known for myself that I have something to offer as a baseball writer and analyst. I will no longer have that particular opportunity, and it aches just a tiny bit.

5.
I know that I feel too strongly about baseball because yesterday the Reds decided not to sign Jeff Manship, and mostly I just feel sad. I know what it’s like to work hard, earn a shot at something, and feel it slip away by a force beyond control. This man likely pitched through pain, relocated halfway across the world, and worked long hours just to be good enough at his job. He was never going to be a superstar, but at least he could have proven he could hang. That chance is gone, at least for now, and it dents my heart.

You need to be logged in to comment. Login or Subscribe
jfranco77
Oh man, poor Jeff Manship, can't even crack the worst bullpen in history :(
Reply to jfranco77