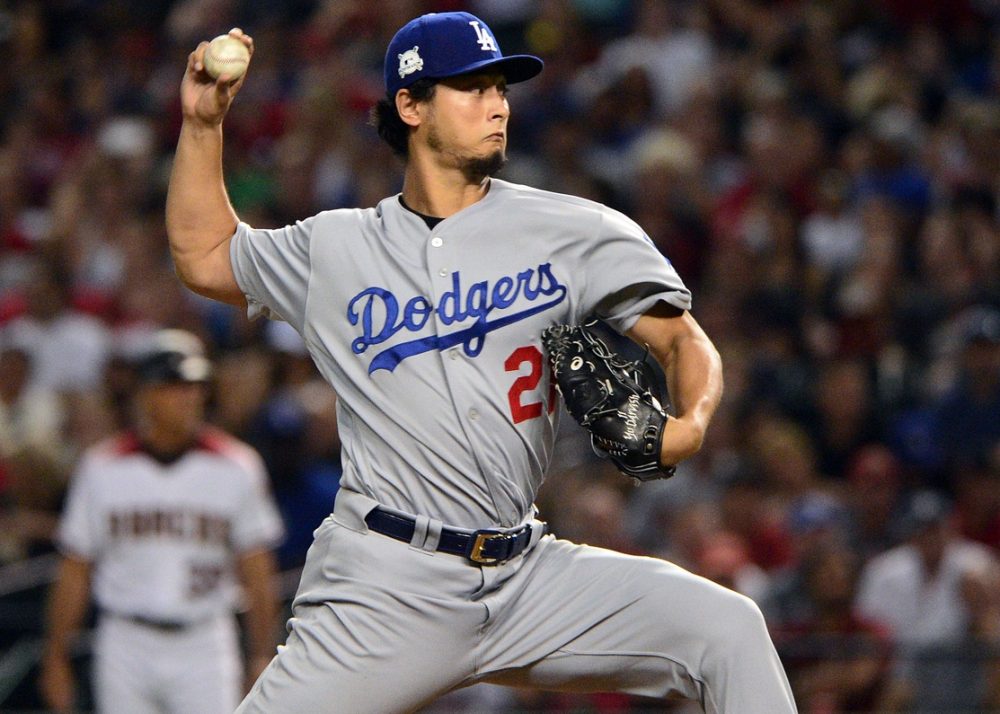 Trying to predict the future is an impossibly tall task, which is why we hand that daunting assignment over to PECOTA each year, and projecting the 2018 season has an added degree of difficulty thanks to the shocking number of impact free agents still unsigned. Spring training begins next week, yet 14 of the top 25 free agents in BP’s rankings remain unsigned, including six of the top eight.

PECOTA’s projected team records were published earlier this week, and as always we’ll continue to update those projections on a daily basis as rosters and depth charts change. Typically by this time of year that means mostly minor tweaks based on positional battles and injury-driven changes, but adding All-Stars like Yu Darvish, Eric Hosmer, J.D. Martinez, Jake Arrieta, and others to rosters could dramatically alter the landscape for teams, divisions, and entire leagues.

While we wait (and wait … and wait …) for all of that talent to be distributed and the projected standings to be shaken up, I thought it would be interesting to see what PECOTA thinks of a hypothetical all-free agent roster. Could a team built entirely out of unsigned players as of February 9 make the playoffs?

For this thought experiment, I’ve placed the All-Free Agent Team—let’s nickname them the Nomads, shall we?—in the American League and given them two “extra” players for a 27-man roster from which to generate a full season’s worth of playing time, since calling up minor leaguers throughout the year obviously isn’t an option.

Other than that—and very much regretting that I didn’t write this article three days ago, so Todd Frazier and his 30 homers could have been in the Nomads’ lineup—I’ll keep it pretty simple. OK, let’s see what this team would look like … 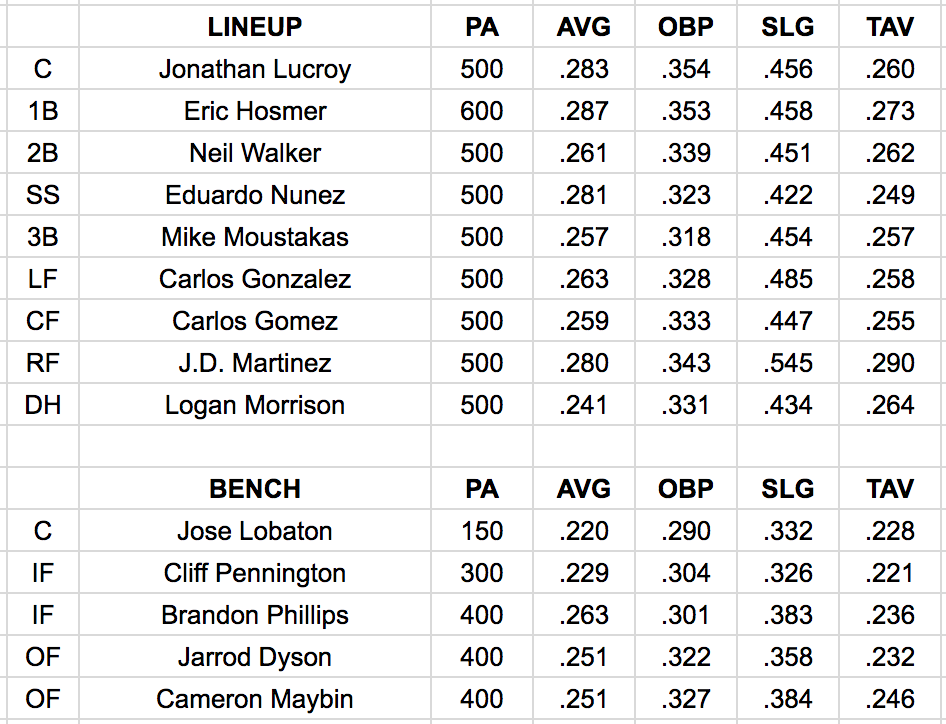 (Note: AVG/OBP/SLG projections are based on most recent teams/run-scoring environments, which is why the ex-Rockies’ numbers may seem very optimistic, but TAV puts everyone’s overall production on a context-neutral scale.)

It was tempting to give the regulars 600 plate appearances apiece to avoid dipping so much into the shaky depth, but I capped everyone at 500 except for Hosmer, who was allowed 600 after totaling 671, 667, and 667 the past three seasons. The lineup has no shortage of weapons and plenty of power—Martinez, Logan Morrison, and Mike Moustakas give the Nomads three of last season’s top 10 home run hitters and there’s no glaring weak spot one through nine—but the defense is very sketchy. There are basically no viable free agent shortstops, so the Nomads are forced to live with Eduardo Nunez, and Cliff Pennington earned a bench role for his ability to play there if needed. I take back all of those snarky thoughts about the Royals re-signing Alcides Escobar. Or at least most of them.

Because of the everyday lineup’s stretched defense—and because Frazier signing with the Mets put a big dent in the Nomads’ depth—I’ve filled the bench mostly with defense in mind. If the Nomads’ manager—Joe Girardi, perhaps?—grows tired of Nunez at shortstop, he can turn to Pennington. If too many fly balls are finding gaps in the outfield, Jarrod Dyson can come to the rescue in center field and Carlos Gomez can slide to a corner. Brandon Phillips can back up second base and third base. Cameron Maybin can platoon with Carlos Gonzalez. It’s certainly not an ideal roster in terms of game-to-game utility, but it’s actually not too bad considering the limited pool of players.

In a neutral environment, PECOTA projects the Nomads to have a slightly above-average offense, even with tons of plate appearances going to weak-hitting bench players. 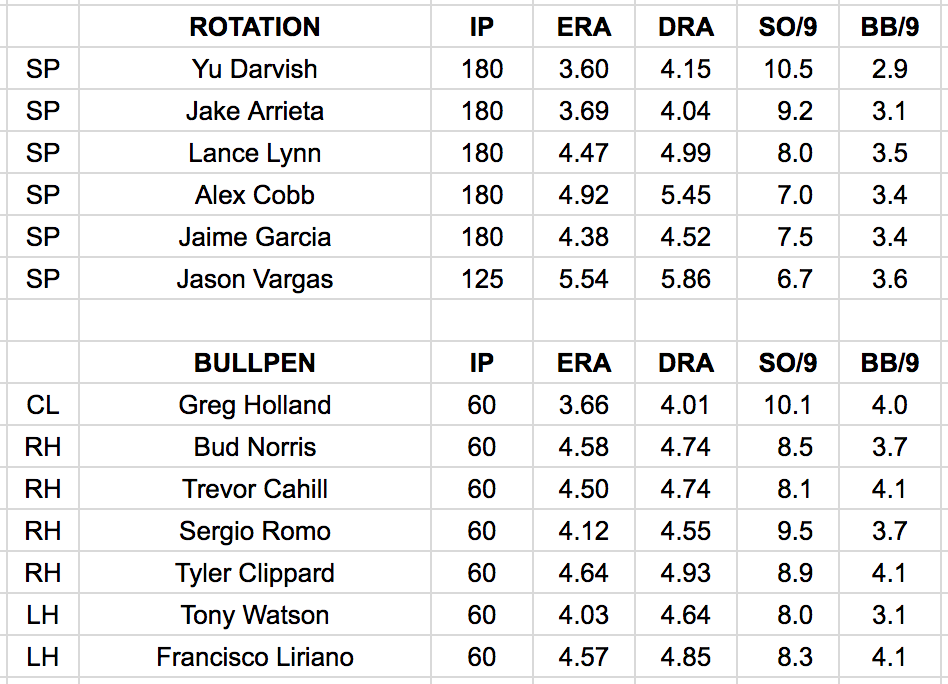 (Note: As with the hitters, I’ve capped the playing time for pitchers at 180 innings from starters and 60 innings from relievers. And the previous explanation about run-scoring environments and raw numbers applies here as well.)

This is certainly a playoff-caliber rotation, with Darvish and Arrieta at the front, Lance Lynn and Alex Cobb in the middle, and Jaime Garcia and Jason Vargas at the back. PECOTA likes Darvish and Arrieta quite a bit for 2018, seeing them both as top-30 starters, but the projections for Lynn and Cobb aren’t pretty. (Matthew Trueblood wrote an excellent analysis of why Cobb fares so poorly.) Garcia is actually projected to be the Nomads’ third-best starter, which came as a surprise to me. Along with the lineup’s power, the overall quality of the rotation is certainly the team’s biggest strength.

And that’s fortunate, because the bullpen is sort of a mess. Last month, Russell A. Carleton wrote about how relief pitchers were the only group of free agents coming off the board quickly and signing solid contracts, so it makes sense that the leftovers are lacking. They’ve already been picked over, almost as if this were a normal offseason. Greg Holland fits nicely in the closer role, especially once his raw numbers are adjusted for being away from Coors Field, and lefty Tony Watson can get the job done in a high-leverage setup role. After that, the Nomads will be asking an awful lot from Bud Norris, Tyler Clippard, and Trevor Cahill, with Sergio Romo and Francisco Liriano likely slated for situational roles.

In a neutral environment, and accounting for a below-average defense, PECOTA projects the Nomads to have an average pitching staff.

So, could a team built entirely out of unsigned players as of February 9 make the playoffs? Absolutely.

PECOTA projects the Nomads—with playing time divvied up among a 27-man roster as shown above—to go 84-78. Their exact playoff odds would depend heavily on which of the three American League divisions they called home, and that’s one level of specificity beyond where I want to take this exercise, but on the most basic level the current projected top Wild Card contenders are the Red Sox (87 wins), Rays (84), Mariners (83), Twins (81), and Angels (80).

You need to be logged in to comment. Login or Subscribe
deadheadbrewer
What would be fascinating is if the free agents who are going to train at IMG Academy in Florida actually played GAMES against the MLB teams this spring, perhaps on some of the MLB teams' off-days. What would they dub themselves? The Bradenton Pariahs? Personas Non Gratas? I'm betting there would be huge demand for tickets, and everyone would be rooting for the free agents. The stadium could serve Newcastle and Sam Adams, two "craft" beers that were once very popular, but which have fallen out of favor during sabermetric times.
Reply to deadheadbrewer
jnossal
So, what would be the payroll of this hypothetical team? In 2018 and 2022, too?
Reply to jnossal
Matthew Stupp
Lobaton isn't a free agent (minors deal with the Mets). Duda and Lind are still free agents
Reply to Matthew