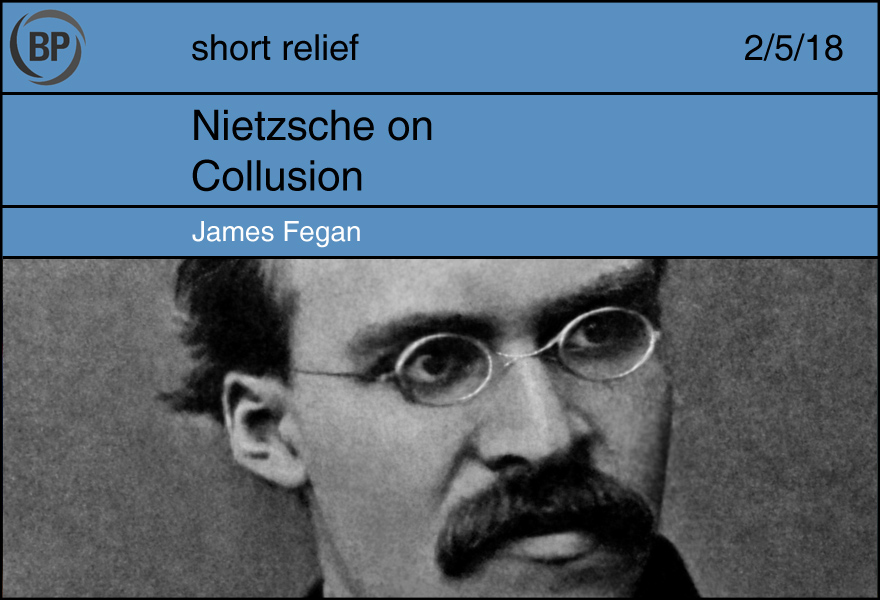 With Spring Training less than two weeks away and dozens of notable free agents still unsigned, the discussion of the frigid market has become much more public. Player agents and even general managers are beginning to speak openly about the factors at work, and what it means for the future of the game. Now, finally, in a Short Relief exclusive, it has awakened the long-needed voice of Friedrich Nietzsche, a mere 118 years after his death.

JF: Do you think we’ve reached a point where an emphasis on efficiency in roster-building and stockpiling cost-controlled talent is hurting the greater health of the game?

FN: Every morality, as opposed to laisser-aller, is a piece of tyranny against both ‘nature’ and ‘reason.’ But this in itself is no objection; for that, we would have to issue yet another decree based on some other morality forbidding every sort of tyranny and unreason.

JF: Wouldn’t the most moral choice be to eliminate the six years of control structure, and allow all players to began their professional careers as free agents who can demand their fair value?

FN: Slavery, in both the crude and refined senses of the term, seems to be the indispensable means of disciplining and breeding even the spirit. We can look at every morality in the following way: whatever “nature” it contains teaches us to hate the laisser-aller, the all-too-great freedom, and plants in us the need for limited horizons and the closest tasks. It teaches a narrowing of perspective and so, in a certain sense, stupidity as a condition for life and growth. “You should obey someone, anyone, and for a long time: or else you will deteriorate and lose all respect for yourself.”

JF: I’ve spoken to enough players who were openly gunning for a higher arbitration figure to get your point, but good God man, that’s pretty anti-labor.

FN: Success has always been the greatest liar, – and the “work” itself is a success. The great statesman, the conqueror, the discoverer – each one is disguised by his creations to the point of being unrecognizable.

JF: Alright man, whatever, do you think there’s collusion going on or not?

FN: Everything evil, terrible, tyrannical, predatory, and snakelike in humanity serves just as well as its opposite to enhance the species

JF: So yes, it sounds like the answer is yes.

FN: When it comes to discovering certain aspects of the truth, people who are evil and unhappy are more fortunate and have a greater probability of success (not to mention those who are both evil and happy – a species that the moralists don’t discuss).

JF: Mr. Nietzsche, thank you for your time.

FN: He who bestows something great receives no gratitude; for in accepting it the recipient has already been weighed down too much. 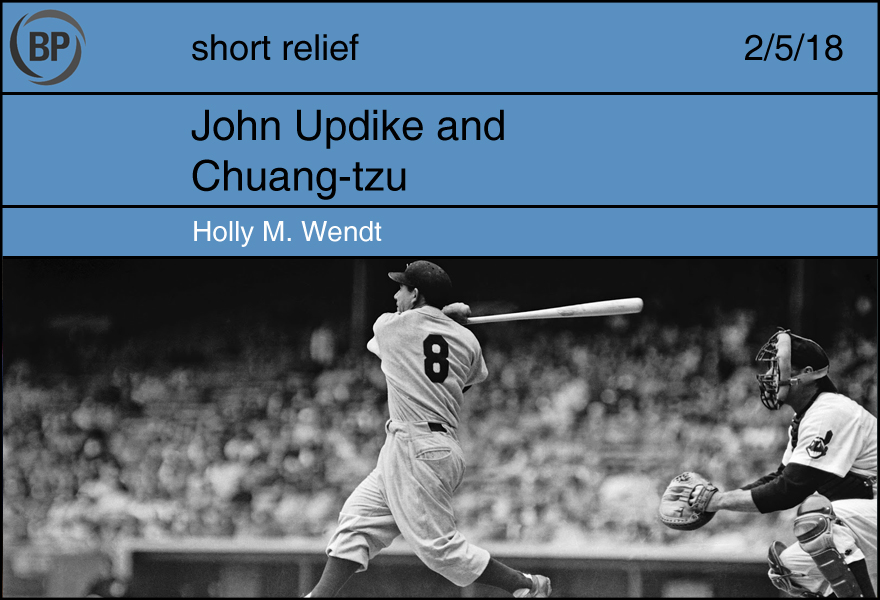 John Updike, novelist and writer of “Hub Fans Bid Kid Adieu,” his farewell to Ted Williams, one of the most enduring tributes in baseball history, had a varied and distinguished writing career. One half of the novels in the quartet Updike is most famous for—his Rabbit Angstrom arc—were awarded the Pulitzer Prize. While Rabbit’s most enduring sporting trait is his high school basketball fame, Rabbit’s home city of Brewer evokes much of Updike’s own origin, Reading, Pennsylvania, which is currently home to the Phillies’ AA affiliate. Baseball has been a recorded part of Reading’s history since 1858, when the city’s first official club team formed, and Reading’s minor league franchise, now under the moniker of the Reading Fightin Phils, is in its 51st year of continuous affiliation with the Philadelphia Phillies. The year Updike was born—1932—the team in Reading was the Coal Barons, playing in the International League. The following year, the team became the Reading Red Sox, the Class A affiliate for Boston.

The web fragments here. The Reading affiliation with the Red Sox lasted only two years, and then there were several gaps in the Reading baseball continuity. Updike didn’t grow up in Reading, anyway, but rather a smaller town nearby. But baseball worked on Updike still, and not only in the lauded Williams essay.

Updike’s first volume of poetry, The Carpentered Hen (1958), contains a poem called “Tao in the Yankee Stadium Bleachers.” Unlike the Williams essay, which views its subject from as close as the good seats will allow, even to the point of picking out Williams’s daughter near the dugout, the poem takes the long view—not only from the uppermost seats, but philosophically, as the speaker considers all that unfolds below with cool detachment. This is, of course, the central conceit: baseball as seen through the lens of the Tao. The comparison builds through the bittersweet push and pull of attachment, what once was and is no more—the old men remembering having seen Honus Wagner play—and the speaker’s own apparent disengagement, encouraged by distance. All this is to him “as when an emperor commands / a performance with a gesture of his eyes.”

It’s all very sleek, the sentences that break across the lines as tight as drums and as fine as fretwork—very Updike. Each time I read “Hub Fans Bid Kid Adieu,” I find myself thinking more about the sentences—about John Updike—than about Ted Williams, and it infuriates me. But it delights me, too, as I delight in nearly any well-made thing, as the Williams essay, also, delights in well-made hits and puzzles on the enigmatic persona.

My favorite enigma of the poem appears in the last stanza: “The thought of death is peppermint to you, / when”; what follows is a list of the nostalgic trappings of the game—the patriotic tinting, the summer sun, children in the stands—with an annoyance that seems conscious of itself. It’s a complaint, and it’s not, simple observance and anything but. Death we expect. A skull speaks to Chuang-tzu at the stanza’s start, offers the peace of ultimate non-doing. But “peppermint”: cool and crisp, a winter flavor, its common red or green rendering nowhere in Yankee blue. I think of one reading—in such a time, such a place, with the game’s oppressive hokey cheer, its doomed marriage of pressure and failure, death is a refreshing promise.

But I can’t help but shake the feeling of Updike laughing at all this, such grand pronouncements calligraphed over the summer game and the knowledge that at least several of Rabbit Angstrom’s greatest angsts comes from imbuing his high school athletic career with too much weight. So I choose another reading: as peppermint, so too must all this seriousness dissolve, a mere flavor on the tongue. Of course nothing can last, but that’s no reason not to watch while Yogi Berra takes this hack. That the result is a fly ball—failure—matters least of all. 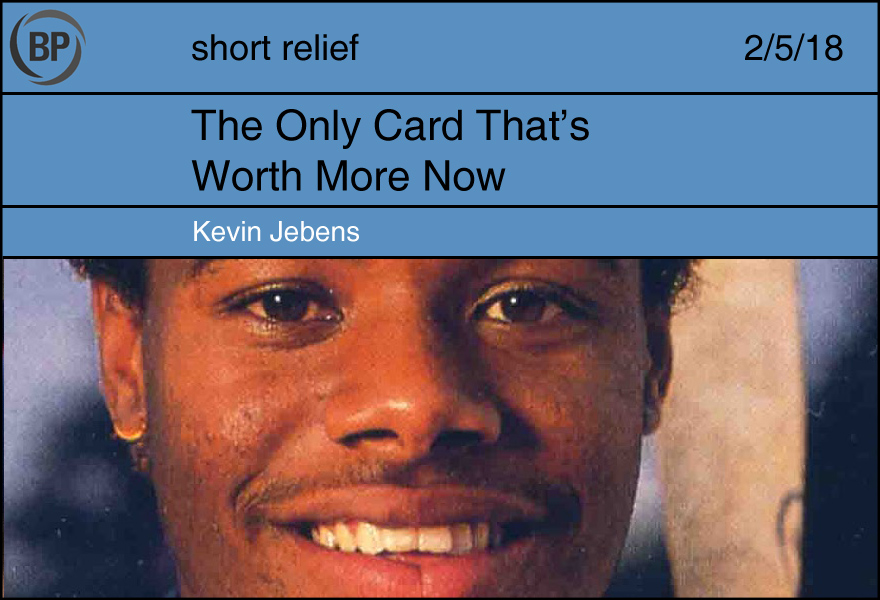 Everyone wanted The Card. My brother Ryan and I were lucky enough (loved enough) to get the 1989 Upper Deck factory set for Christmas, but we still bought packs because we wanted to have Ken Griffey Jr.’s rookie card outside of the set. One day, I opened my second to last pack in the latest box we’d bought, and I pulled it. The high-quality, glossy stock paper. The number one on the back looked so cool. The big smile on Junior’s face matched my own. I spent the rest of the day waving it in Ryan’s face. We had lots of good pulls, but The Card was the best of them all, and I had it!

Flash forward twenty years. Ryan and I had stopped collecting, like many kids. Eventually we started buying some new Topps boxes thanks to the fancy inserts: relics, autographs, and printing plates. But we probably spent more money buying cheap boxes of cards we’d had as kids. We usually didn’t get any cards worth keeping, but we laughed and often commented, “Remember this card?” or “Didn’t you collect that guy?” Opening the packs brought back memories of our joy in collecting, and five to ten bucks per box was worth the hours we spent on them yet again, as adults.

Ryan had lived in Texas for several years before we finally organized a family Christmas down there. When I’d last visited him, he’d bought us six vintage boxes from the eighties and nineties. I decided that because it was Christmas, I wanted to do one better. I bought him a box of 1989 Upper Deck on eBay. It cost me a hundred bucks, the average price of the Griffey when I’d first gotten mine. There was no guarantee The Card would be in there, but I knew he’d have a blast going through the box.

Ryan wanted to open it together, but I hesitated. I didn’t want to get The Card this time. The box was a gift to him, and I’d feel bad if I pulled it. We each picked a pack, opened at same time, shared our best hits, and went again. The box was soon down to three packs apiece.

I was looking at my cards from the pack, and then I heard Ryan. “I … I got it! Look, I got it!” He shouted this—no indoor voice. His eyes were wide, he was practically bouncing in his seat, and the big smile on his face matched Junior’s. I whooped in reply, and we were kids again. We rushed to his bedroom and unceremoniously dumped out a Will Clark rookie that was once valuable but now could be found on eBay for a buck. It didn’t need a case anymore, but The Card did. He couldn’t stop grinning that day, and I’d never been happier to miss on pulling the best hit.

It’s the best present I’ve ever given, and received.