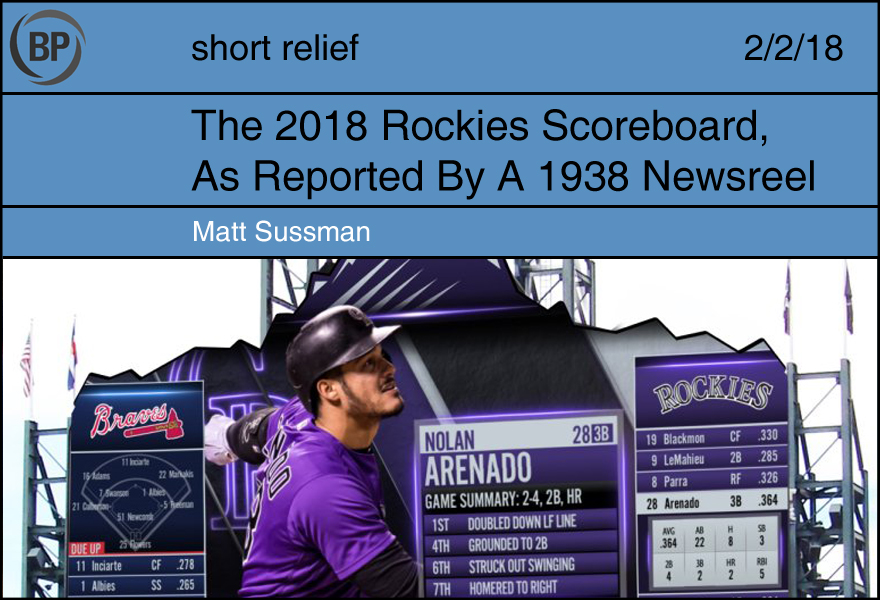 SAY HELLO TO YOUR NEW SCOREBOARD!

• 258% larger than the old Coors Field board 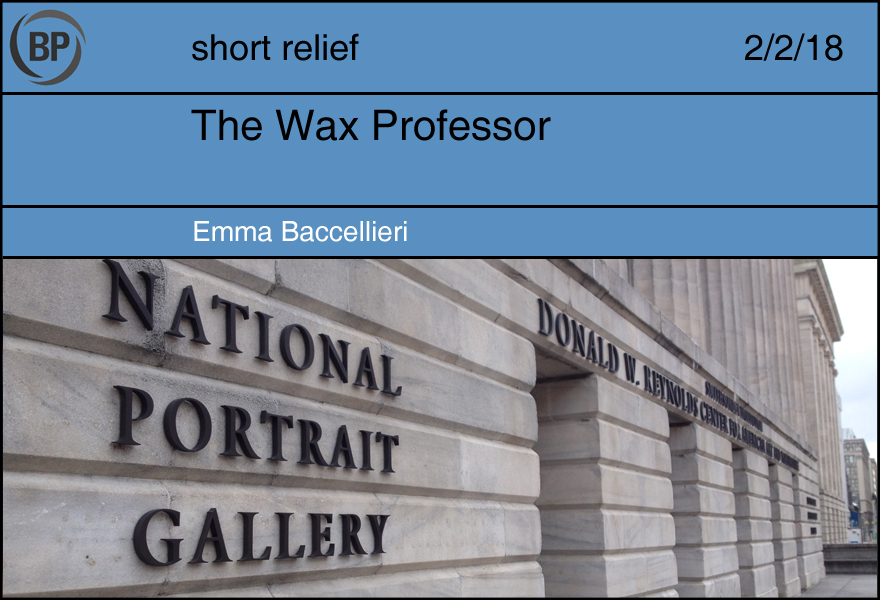 The National Portrait Gallery was, for a while, among my least favorite of Washington, D.C.’s major museums. By definition, portraits should be more individualized than any other art form, and yet so much of the museum always seemed the same. There are hundreds and hundreds of different pieces in the 18th- and early 19th-century collections, but many of them feel like only very slight stylistic variations on the same tiny handful of concepts: rich people in fancy chairs, or war heroes proudly upright, everybody stiff and sour-faced. The selection of modern portraits on the museum’s third floor is far more diverse—in terms of both subjects and artists—but there are still many that feel rigid, the person’s likeness reproduced in extraordinary detail but without anything that comes across as meaningful personal depth.

This opinion lacks nuance or patience or any artistic knowledge, and it’s softened as I’ve gotten older. There are several portraits I love, and many more that I appreciate in a way that’s less sentimental, but there is maybe none that I find so striking as Rhoda Sherbell’s sculpture of Casey Stengel. 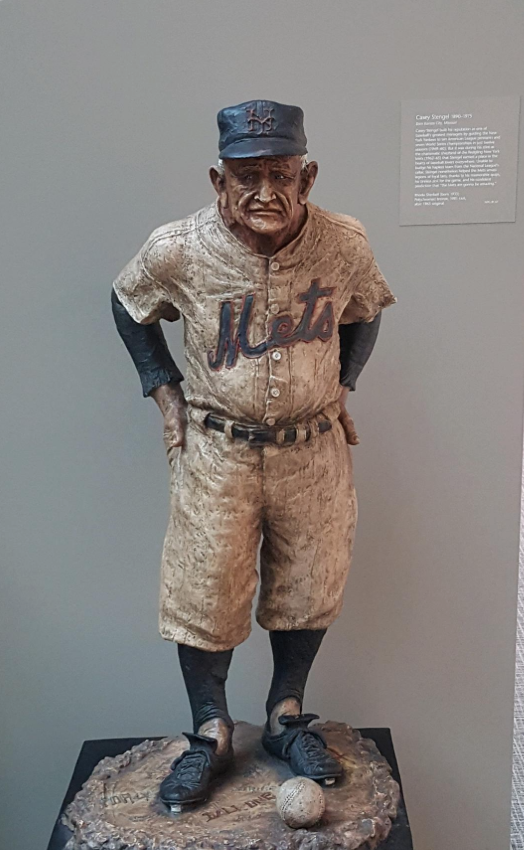 Part of this is location; most of the museum’s sports figures are relegated to one mezzanine, a fairly narrow space that doesn’t give you much room to step back and look at a painting before hitting the railing blocking you off from the open floor below. But the Stengel sculpture cuts into that space. He confronts you directly, the way he would some mild umpire. Rather than being flush against the wall like the other sculptures of the collection—simple, unobtrusive—Stengel is a little island in the walkway in and of himself, set against his own little gray block to command your full attention. He’s not particularly big for a sculpture, but he’s plenty big for the space. (Especially considering that the only other sculptures in the sports collection are busts, and 44 inches is maybe close enough to lifesize for Stengel, anyway.) He looks tired and crumpled, shoulders slumped and uniform wrinkled, but there is something in the eyes that makes them look almost uncomfortably sharp.

The sculpture was completed in 1981, but the cast for the piece was done in 1965, the year that Stengel left baseball and a decade before he died. He feels very ready to retire here, but he also feels distinctly alive—taking up space, dirt on his jersey, hands in his pockets. He’s a portrait who is unquestionably himself. 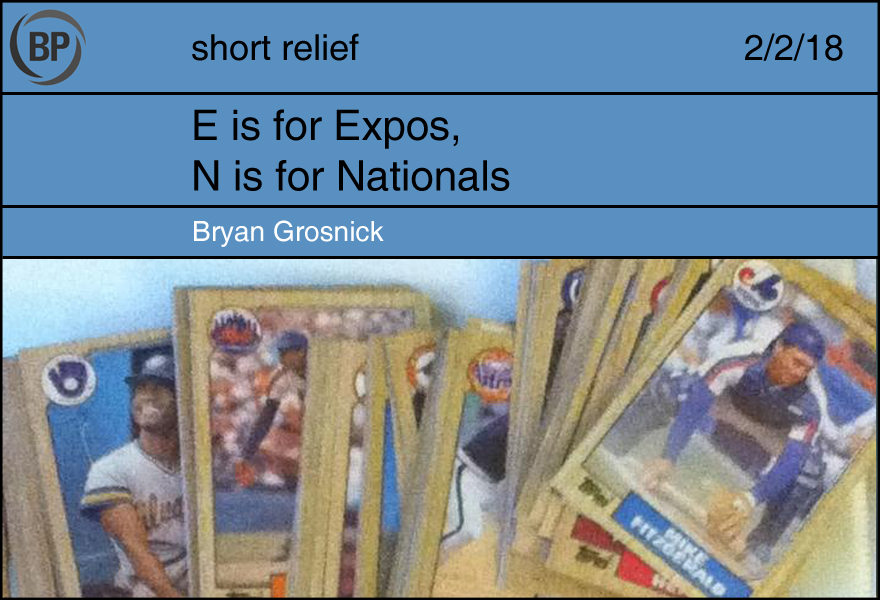 The baseball cards had to go in order. First the team name, then by player last name. Angels, Astros, Athletics… Jay Buhner before Alvin Davis. A lonely kid spends enough time with those rectangles and the byproduct is a 26-step ladder that takes you from one end of the baseball continuum to the other. Angels to Yankees, known by heart and every team in their place. I loved baseball, loved knowing baseball. I’d recite it to fall asleep, on those dullest of November nights.

As excited as I was for 1993 and the league’s influx of purple and teal, the advent of my first MLB expansion messed me up and gave my smooth, clean list a jagged edge. The first MLB teams in Colorado and Florida didn’t care about the decade of work I’d put into memorizing that seamless sequence. How could there possibly be a fifth team that begins with R? How come I keep confusing the spots for the Mariners and the Marlins? Now, in the quiet spaces of the afternoon, I had to struggle with what once was easy each time I had to find a home for a Upper Deck Chuck Carr or a Topps Roger Clemens. The one thing that I once had mastered, now escaped me.

(This must have been how Bill Pulsipher felt.)

The actual term for this in educational psychology is called “proactive interference.” That’s not Jacoby Ellsbury and Josh Reddick’s bullshit, it’s when you forget something because old information stuck in your head stays there indefinitely and interrupts your recall of new information. You forget what you were supposed to remember because you remember what you were supposed to forget.

With work and a year and more time in front of stacks and binders, I started to adapt. But it was never the same. Every now and then I’d sort the teams in my head and the Rockies just wouldn’t show up. Or I’d remember the Marlins after I passed the Mets and then I’d have to go back over them in my head again. It’d never again be quite the same… which we can say about everything from our youth.

Then it was 1998 and the Diamondbacks and the Devil Rays. This should have been easy! They actually lined up right next to each other in the ol’ noggin, between the Cubs and the Dodgers. But by that time there was high school and video games and Neon Genesis Evangelion and punk rock shows at the Orange Park Lion’s Club and… less baseball. The holes in my list widened, the wrong memory remained. I almost didn’t care.

The move of the Expos to Washington is the one that really did me in, and by that time I was back in the thick of the national pastime, following the Mets and reading Baseball Prospectus Annuals and reading Rob Neyer at ESPN.com. It was hard enough to learn how to focus on OBP after years of back-of-the-card stats like RBI, but pulling the Expos out of their slot between the Dodgers and the Giants still haunts me to this day. It was the first team to leave my list, and it haunts my subconscious like a red-white-and-blue phantom, whispering every time I move down the line of letters past E. (The ghost looks like Hubie Brooks.)

Time buzzes past like a dragonfly, all zig-zags and startles. After seven years of writing about baseball regularly and thinking about it more than ever before, I’ve run that alphabetical list into the ground and finally rebuilt it in the post-Devil Rays image. Almost. I never skip the Diamondbacks anymore, and the Rays fit better between the Rangers and Red Sox than they ever did in the Ds.

If I could draw you a map of my mind, it might not be as neat or as orderly as a baseball diamond or a perfect list. There’d be chaos in the corners, shadows and loose thoughts and a million little unformed phrases. The Mariners will sometimes follow the Marlins, a time-traveling gift or a curse from the 11-year-old me that sat with baseball cards aplenty for hours on end. Positive interference.