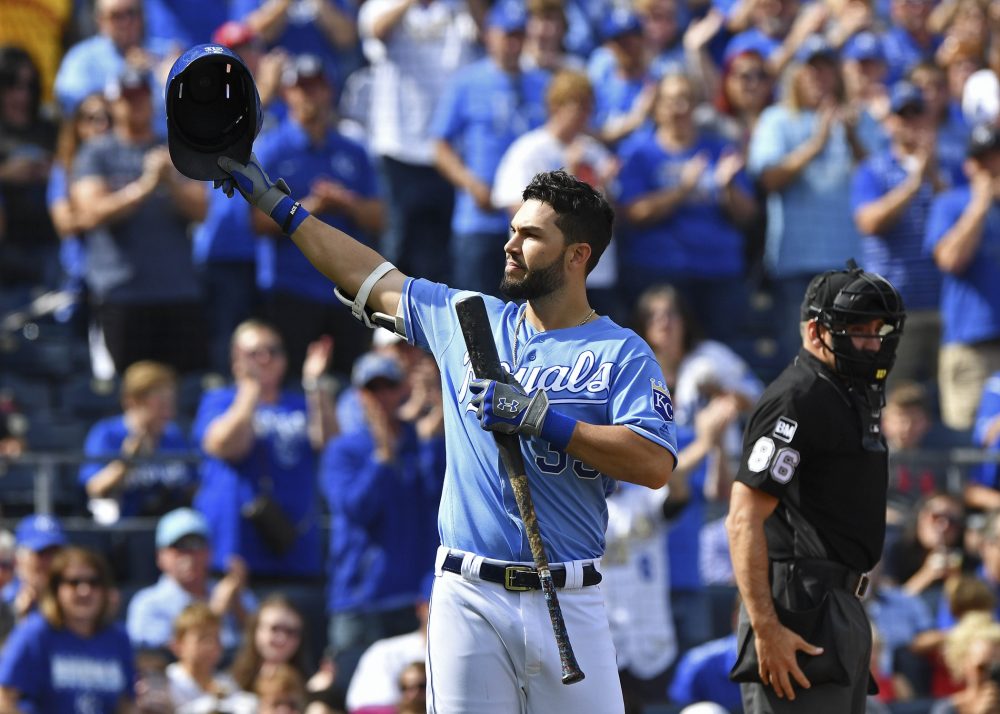 If there is any current free agent who is trying their best to benefit massively from this notoriously slow offseason, it’s Eric Hosmer. Back in January, there were rumors that multiple teams were ready to offer $150 million for the free agent first baseman, and while the money may not be in that area anymore, it appears that the two teams that have indeed put offers on the table are the Padres and the Royals. Additionally, there’s been talk about how the Cardinals were showing interest in getting Hosmer to move across the Show Me State.

Now it appears that Hosmer’s camp is pushing for something more than a seven-year deal. According to Jon Morosi of MLB Network, the offers that the Padres and Royals have put on the table are both seven-year contracts, but Hosmer is apparently trying to hold out for a deal that lasts even longer. Morosi also pointed out that the Royals have an increased ability/need to re-sign Hosmer after they traded Brandon Moss (and his contract) to Oakland earlier this week.

As such, Hosmer’s camp probably realized this and saw potential for the 28-year-old lefty hitter to take advantage of the Royals being in a somewhat vulnerable spot when it comes to negotiation. There’s also the possibility that this could be some grand posturing on their part, since teams are very sheepish to hand out long-term deals in general, much less an eight-year deal. It seems very unlikely that Hosmer will get an eight-year deal from either team, but if this is just posturing then it could be a sign that this long, drawn-out free agent saga could finally be coming to a close.

Another prominent free agent who’s willing to sit back and wait for the right deal to come along is Yu Darvish. Just like Hosmer, Darvish has plenty of interest surrounding him and also has a lot of stagnation on the part of the teams. The Dodgers are rumored to be the favorites to re-sign Darvish and it would certainly make sense in a perfect world to see Los Angeles try to bring back their big trade acquisition from the 2017 campaign.

However, the Dodgers don’t live in a perfect world and they have to worry about the luxury tax. In fact, it appears to be the main thing that’s hampering the Darvish situation. While the Dodgers are still biding their time, the Brewers are reportedly “in the mix” to bring Darvish to Milwaukee. Robert Murray of FanRag Sports noted that the Brewers definitely have the financial flexibility to make a deal happen and it would also be a “seamless” fit for their rotation.

Milwaukee certainly isn’t the only other team in the running to land Darvish, as the same report noted that a handful of contenders like the Yankees, Twins, and Cubs are also showing interest. For now, it appears that everybody involved is willing to play the waiting game, even if it goes past the date of pitchers and catchers reporting for spring training. The impasse looks like it’s going to continue.

Earlier this week, major news came out of Cleveland when the franchise made the decision to drop Chief Wahoo from their identity (while still planning to profit from merchandise sales featuring the logo) ahead of the 2019 season. While the move is definitely a sign of progress, it also brought to mind the situation of another team that dropped its controversial logo following the 1989 season: the Braves.

Heading into the 1990 season, the Braves dropped the laughing Native American image that had served as the basis for their primary logo since their days in Milwaukee in favor of the simple script-and-tomahawk logo that is still their logo to this day. However, in the wake of the Chief Wahoo news, the Braves released a statement to the Atlanta Business Chronicle stating that MLB still keeps the logo as part of the Cooperstown Collection and it is a “very small percentage” of the merchandise that they sell.

This is indeed true, because back in 2015, the Braves proved that the logo was still in their hands when they somehow thought it was a good idea to bring it back for their spring training hats. Fan outcry forced them to drop it and the logo’s brief revival was cut short. Fortunately, the only mascot-related controversy that the Braves have to deal with currently is whatever this creature named Blooper is supposed to be.