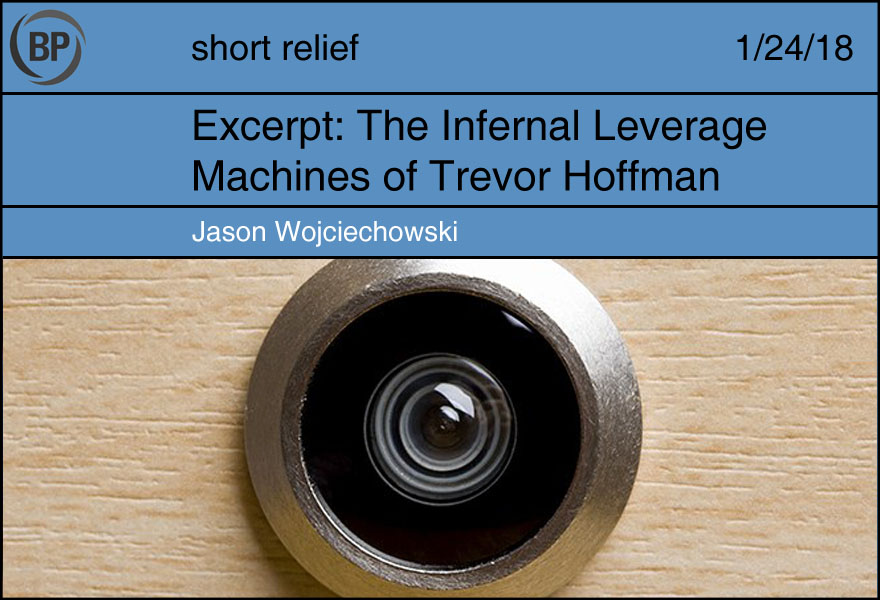 Angela Carter died in 1992 without ever finishing the long-rumored sequel to her 1972 surrealist novel The Infernal Desire Machines of Doctor Hoffman. Short Relief will be running weekly excerpts from the scraps of that sequel found in her papers after her death. The following is from the end of the book, as our hero, Desi Relaford, finally meets his rival, Hoffman, and learns about Hoffman’s assault on baseball.

I would have hated him less if he had been less bored with the ninth inning.

‘The source of closer-energy is, of course, inexhaustible, as my early colleague and co-researcher, Rivera, surmised.’

He pointed through the outfield fence to the bullpen that lay quietly beyond.

‘For the last five years that bullpen, powered by simple, radiant energy, e.g. closer-energy, has been beaming upon hitters the crude infrastructure of
(a) synthetically authentic leverage;
(b) mutable combinations of synthetically authentic leverage;
and has also been transmitting
(c) sufficient changeups to intensify a fastball until it becomes a strike according to the law of effective velocity, or, if you prefer a rather more explicit term, complex whiffing.

‘By the liberation of the bats we shall, of course, liberate man. And the naked man will walk in and out of everybody’s dugout.’

But he was one of those pitchers it was impossible to imagine without their uniform. He was taken by a fit of spitting which he directed in a stream behind the mound.

‘The fastball is an involved correlative of the changeup and, once leverage is endowed with synthetic form, it follows inevitably that swings and misses operate on the same level. This is basic to –’

And this was the closer whose setup man had told the General Manager to go in fear of changeups! I interrupted him; I had a question.

‘And whatever really happened to Rivera?’

The closer took out a canister from his pocket. It contained two human fingers nestled in cotton.

‘This is all we managed to salvage.’

This excerpt is remarkable standing alone for its imagery, its savagery, its total lack of fealty to reality masking a deep commitment to truth, but it is even more remarkable considering Hoffman was still a minor-league reliever at the time of Carter’s death. Did she simply intuit what he was to become? 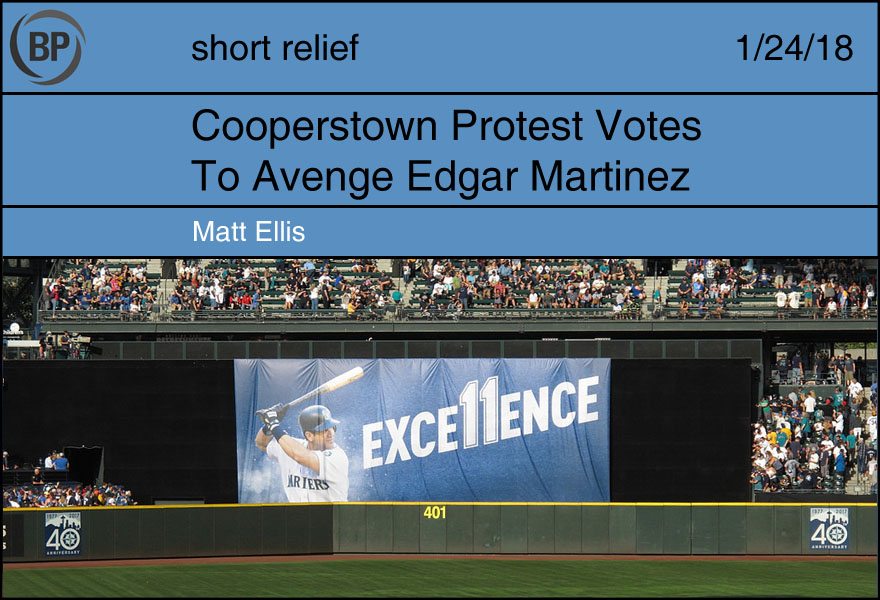 Much ink has been spilled for the past few months (actually, really, years) over Edgar Martinez’ possible entry into Cooperstown. On the one hand, there are the Mariners fans, each of whom know precisely what time it is. Then, on the other, we the Keith Olbermanns taking an absurdly inordinate amount of time away from their SIR, SIR…’ing The President to note the “insanity” of honoring the player who…they named the award at his position after. And finally, there are even current ballplayers threatening a media blacklist to protest against their team’s beat writers who dare leave ol’ Gar off the ballot:

Dear @TBTimes_Rays,
You are hereby on probation from interviews until my childhood hero, Edgar Martinez is rightfully voted in to the Hall Of Fame. This may seem unprofessional and unfair, but I say to you “My oh My”.

Later today we are going to find out who makes the cut, and by all accounts, Edgar or not, it’s going to be a historically large class. From my CV you can probably guess where I stand on the whole Edgar Martinez/Designated Hitter issue. A Hall of Fame that allows relievers in has no excuse not to honor one of half the game’s starting nine. If my mustachioed dinger machine misses out this year, and the next, I’m going to propose a few protest votes to sully an already sullied institution.

1. The Slice of Pizza from “Here Comes The Pizza” 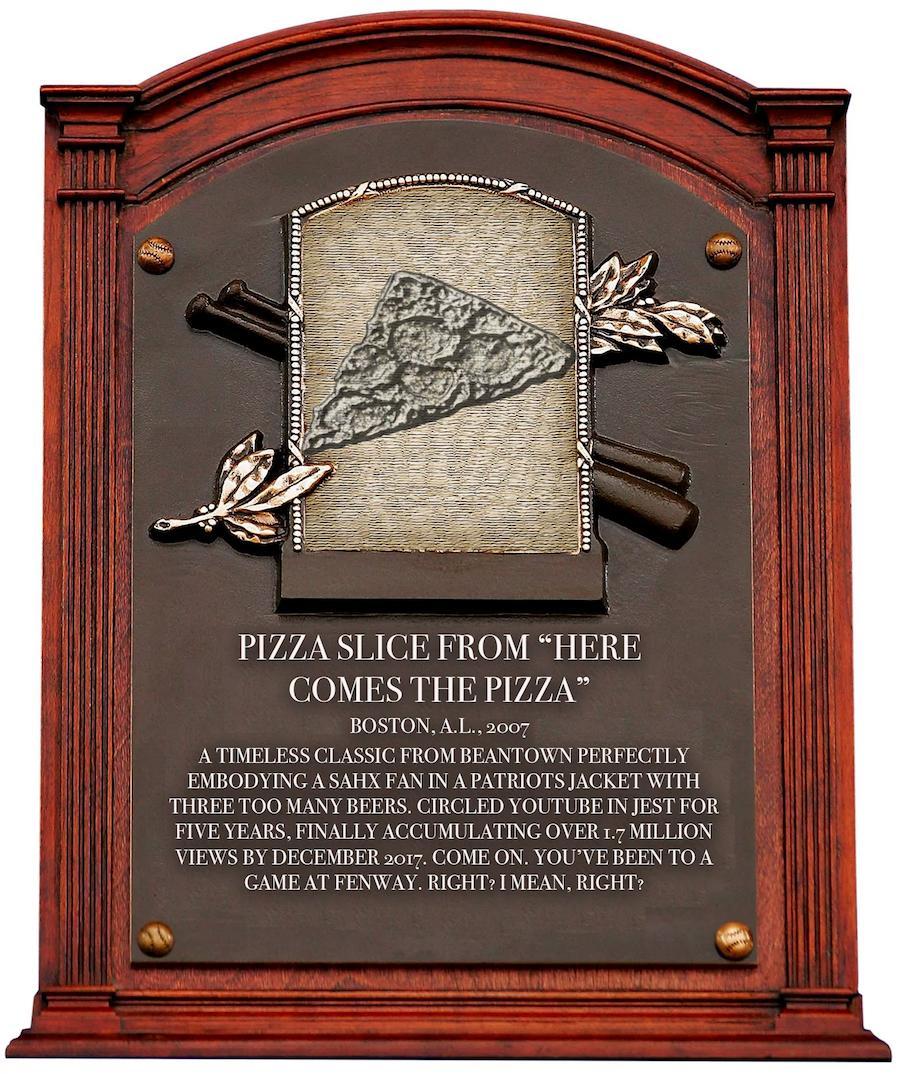 Edgar Martinez earned 65.5 fWAR throughout his career in Seattle, which included 4,800 innings in the field with a total career OPS of .933. But fine, whatever, this was a funny video were some drunk jabroni in a Patriots Jacket threw a piece of pepperoni pizza in the face of a guy trying to catch a foul ball in an early morning April game. APRIL. I once saw a guy get hit over the head with a flying skateboard outside Fenway after a Red Sox loss I like beer too, but good lord. 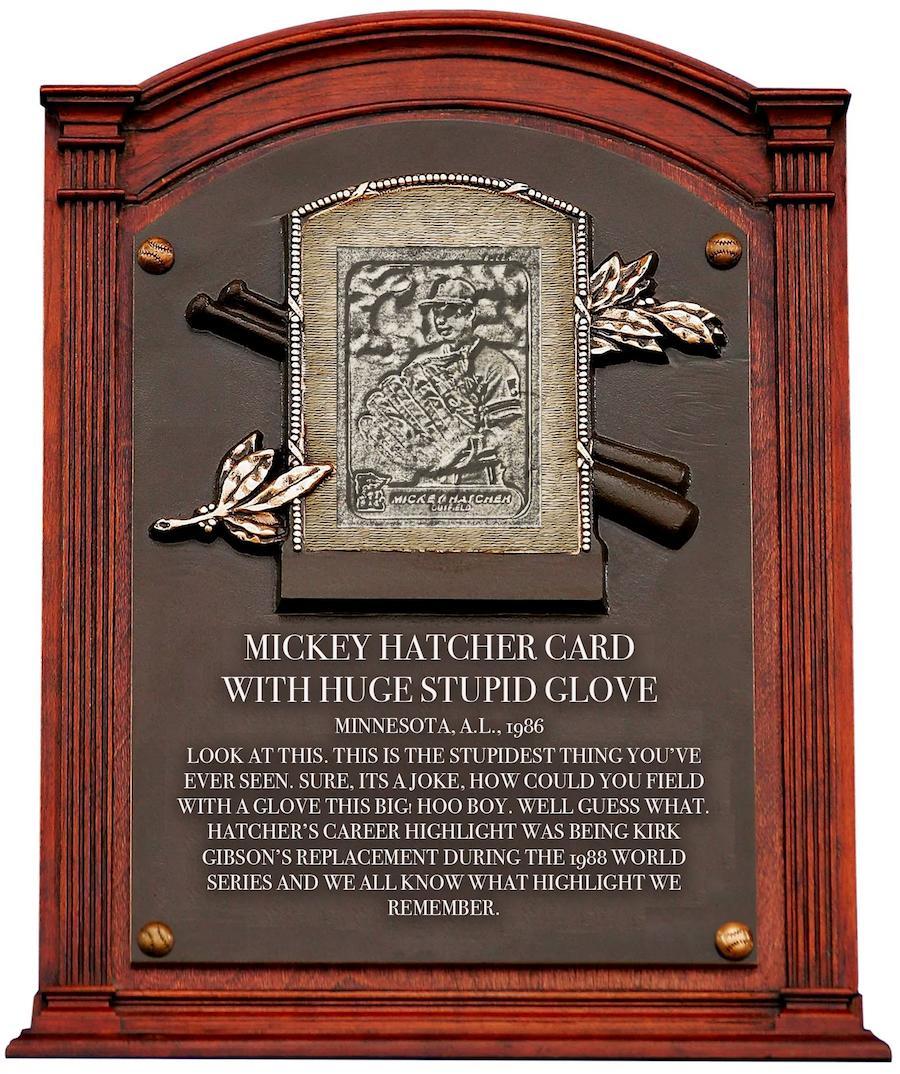 Yeah yeah, the Mickey Hatcher giant glove cards are a part of baseball lore. But Edgar hit the double, and what you don’t remember is that Hatcher was Kirk Gibson’s replacement during the 1988 World Series. I’m sure he was happy for his teammate on that famous night and all, but if we’re talking about commemorating moments of baseball history which fly under the radar in favor of other, perhaps more “popular” things for whatever reason, then I guess that brings us to 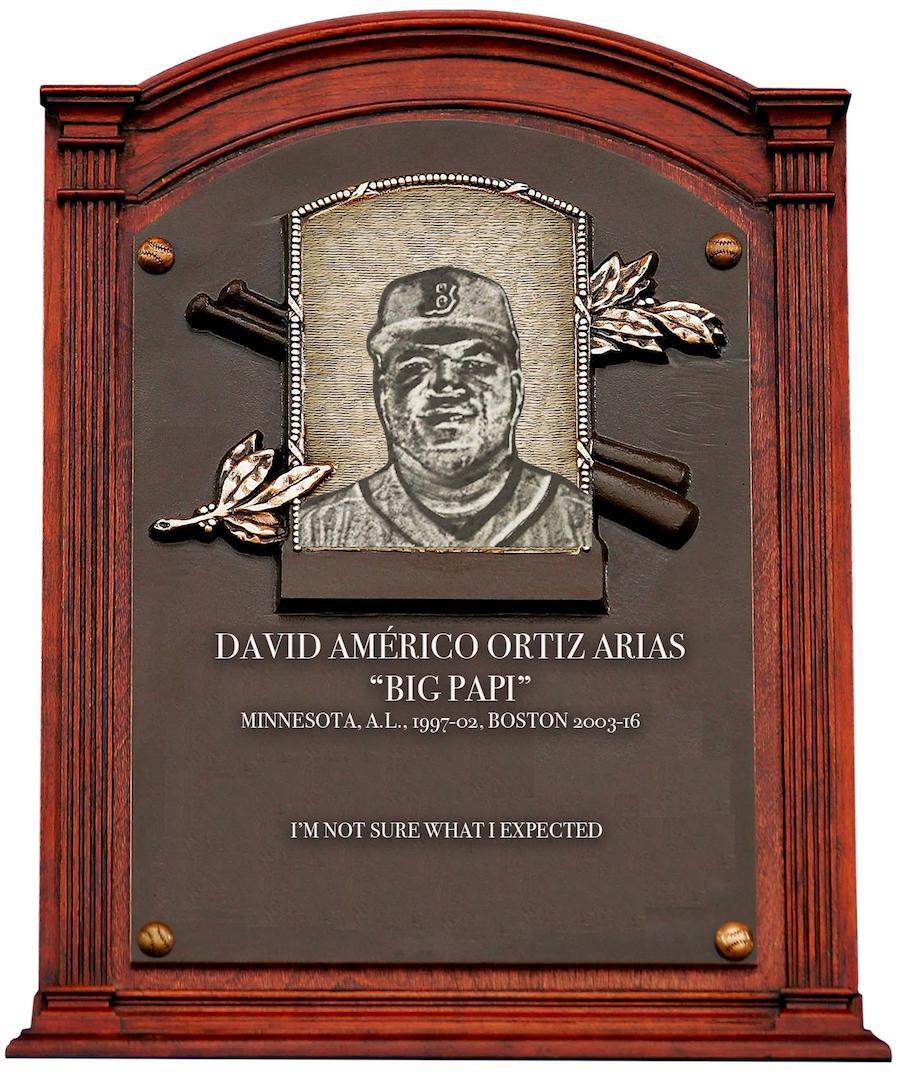