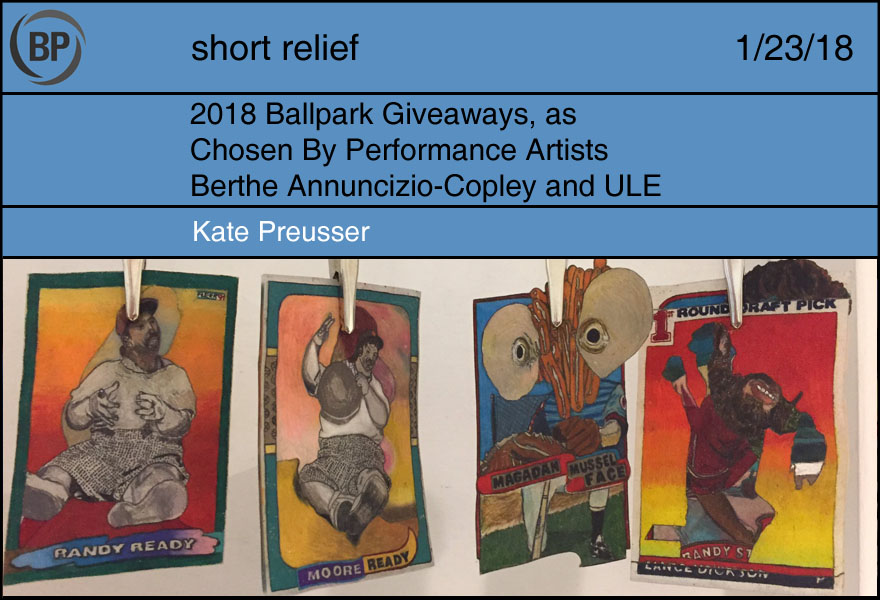 In a bid to court a new, untapped fanbase, MLB has announced the following calendar of giveaways designed to appeal to lovers of modern art. “I mean, we’re about to lose out to soccer for the third-most popular sport in America, so we have to do…something?” said a visibly exhausted Tessa Stokes-Brinkley, who was brought in to serve in Commissioner Manfred’s new “Growing the Game” initiative after being downsized from the NEA. “So we were thinking about who doesn’t come to games but has significant disposable income, and also has a tremendous amount of patience to wait for something to develop, and… it just kind of clicked. Plus, I did a minor in art history at Holyoke, so it’s good to use that in some way, you know?”

The giveaways will be curated by renowned artists Berthe Annuncizio-Copley and her former lover, ULE. Annuncizio-Copley was suspended in a sky-chrysalis deep in a Vancouver forest at the time and unavailable for comment regarding the selection process, but ULE responded to an interview request with a hand-blown glass sphere containing a feather from the last known living Hawaiian o’o bird and a miniature vending-machine baseball plastered with Lisa Frank stickers.

The promotional schedule is subject to change, dependent on availability and grant money.

3/29/18: Opening Day Special (available at all ballparks)
A leather pouch containing oil scrapings from a recently rediscovered fresco of Saint Bonaventure, a seashell that has been whispered into by a lonely child, and a coupon for 10% off at MLB.com.

4/5/18: Rogers Centre (Blue Jays)
A box set of the TV show WINGS, with commentary track by the band WINGS, and a hollowed-out quail’s egg containing a single hair from the beard of Jose Bautista, for wishing on.

4/27/18: Tropicana Field (Rays)
A polished stone from the shallow end of the lake where Annuncizio-Copley and ULE once summered, known for both its fine swimming-dock and enthusiastic leeches.

5/1/18: Kauffman Stadium (Royals)
A funnel cake served on a box of dust collected from the vanishing prairie.

5/10/18: Safeco Field (Mariners)
A 2018 game schedule printed on the back of an unsent, unrequited love letter, and a single Chukar Cherry that has been offered to the sea-god Nyanthular, tasted, and rejected.

6/5/18: AT&T Park (Giants)
The essence of salt air, new money, Haffkine’s vaccine, and the eau de toilette the washer-woman at Alcatraz dabbed behind her ears every morning, spritzed directly in the face of every person who passes through the gates.

6/26/18: Angels Stadium (Angels)
The smell of a new lover, applied directly to the pressure points, and a single orange blossom, handed to you by a smiling Berthe.

7/9/18: SunTrust Park (Braves)
A kudzu-choked stop sign that has been taught the value of mercy.

8/13/18: Petco Park (Padres)
Seventeen of ULE’s tears in a crystal phial suspended from a braided strip of leather made from the hide of a cow who loved not wisely, but too well.

9/18/18: Nationals Park (Washington Nationals)
A literal case of the Mondays.

9/29/18: Citi Field (The New York Mets)
No actual giveaway, but all park-goers are welcome to enter the artist’s yurt located along the third-base line, sit nose-to-nose in quiet contemplation, and consider whether she ever really loved you, anyway. 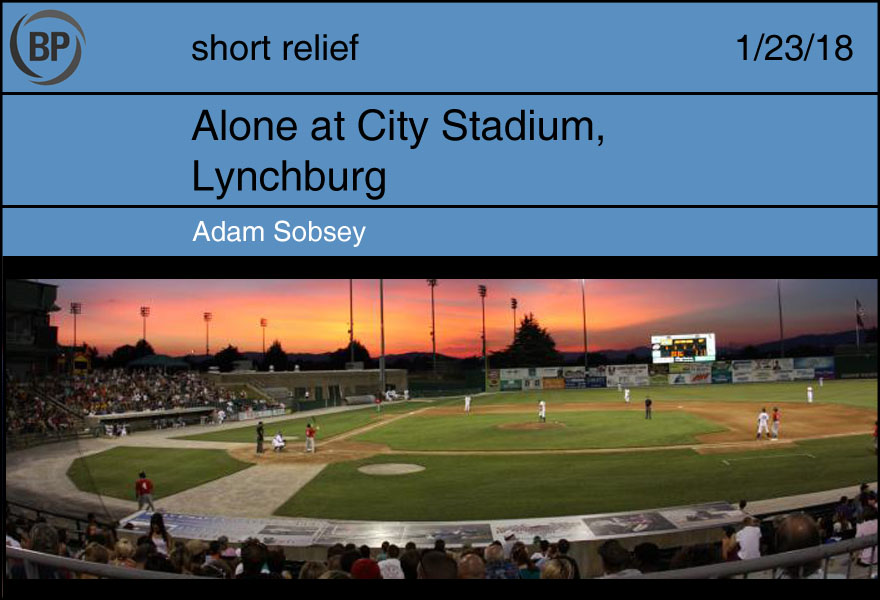 Have you ever been in an empty ballpark? I don’t mean a poorly attended game, or a crowd thinned by a rain delay, or lingering long after the last out has been made and only the grounds crew remains, along with the cleaning service scouring the stands of peanut shells and programs. I mean completely empty, just you and a ballpark—alone in the church of baseball.

I had this experience for the first time in my life on Saturday, and the best part of it was that it was unintended. Some scenes in my new book take place in the ballpark in Lynchburg, Virginia. (I am delighted to report my discovery that the city is known as “the Pittsburgh of the South.”) I wanted to revisit City Stadium, which I hadn’t seen in thirty years, mainly to see if the scenes needed adjustment for scale or feel, and whether there were further details to be gleaned from the setting itself. I happened to have cause to be up in Lynchburg over the weekend, and it transpired that the arrangements I made to visit City Stadium resulted in having it entirely to myself.

The ballpark in this state was at once yielding and unyielding. It allowed the visitor to stand on its mound and face down demon batters, home plate terrifyingly close; to leave boot prints in soft winter basepaths; to sit in unpeopled bleachers with the mountains over the left-field wall—that old fir tree by the foul pole must have been there when I last sat here, a generation ago. (Yes, the is the place, you’ve been here before. I did not have that sensation when I revisited lively McCoy Stadium in Pawtucket for a playoff game, after twenty years away.)

There was a patch of snow on the field behind home plate, where the grandstand blocked the sun from melting last week’s snowfall. In the winter ballpark one scratches for morsels, and they are there, even in the emptiness of January: on the concourse, a box of empty ketchup pumps; in one of the dugouts, forgotten lineup cards, and scouting reports on opposing pitchers that read like tiny invocations, calls to a higher power and grace. (“Sinker doesn’t run much but does sink. See it up!” … “Don’t try & guess with him. Look to an area & stay oppo!”)

City Stadium has been extensively renovated, but in its emptiness, unclothed and cleansed by winter, it reveals the same body—some of its old bones are still visible—and from it exhales its history: all the pitches and hits and runs and games; Dwight Gooden, age 18 in 1983, striking out exactly 300 batters in 191 innings as a Lynchburg Met. This Carolina League record will never be broken; the ballpark, which harbors it like a secret, will never relinquish it.