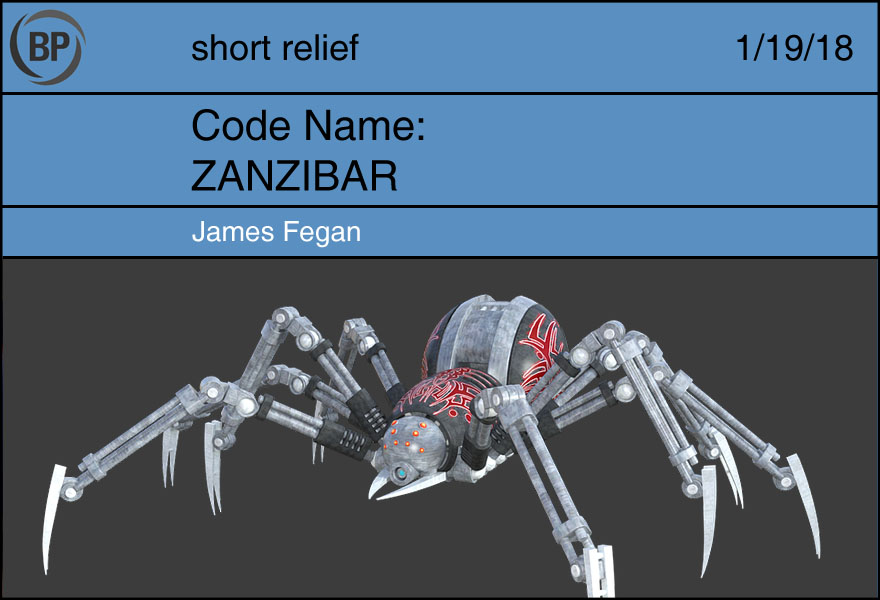 What is causing the stall in free agent signings? Is it ownership collusion to suppress player revenues? Is it an elaborate troll that Scott Boras is inflicting on you, personally? Are teams torn between filling holes in their roster with available, experienced free agent baseball players, or with an escaped, government-made, 17-foot-tall robotic assassin spider, code-named ZANZIBAR?

Given the possibly enormous implications of the introduction of ZANZIBAR to the baseball world, the paucity of discussion of its role in the slow market is eye-opening, as eye-opening as one of ZANZIBAR’s many probing tendrils, though that is more in the literal sense.

Having hit .300/.362/.574 over the last four seasons, Martinez guarantees the immediate injection of an elite, middle-of-the-order bat, which is balanced against the concerns of the length of the commitment required to secure him, and a possibly immediate decline in his defensive utility.

ZANZIBAR is capable of reaching 60 mph in ground speed in 0.7 seconds, each of its limbs can produce 39 tons of force, and given its height, can extend to a 50-foot wingspan when fully extended. Has ZANZIBAR seen a single pitch in its life? No. Does it respect the very concept of a strike zone? No. Is clubhouse violence when ZANZIBAR grows weary of defensive drills a concern? Daily. But the physical tools present an upside that is undeniable.

CONCLUSION: A rare situation where Martinez is the smarter long-term buy, as even if ZANZIBAR produces a miracle 2018 season, the possibility that sometime over the next five years, Alex Cora will walk into the clubhouse to find his starting infield impaled on robotic spider arms is very high. But not enough teams really go for it these days.

Arrieta still possesses top of the shelf stuff from an ideal starter frame, but will his shaky command profile hold up as he ages and his fitness level declines from truly elite to merely well above-average?

ZANZIBAR once threw a mangled corpse which it itself had slain, into the muzzle of a tank cannon, at 700 mph from 1.2 miles away, disabling the weapon just long enough (32 seconds) so that it could race forward and slice the tank in half and destroy an entire platoon of enemy combatants. Whether ZANZIBAR has “starter makeup” is an open question, however.

CONCLUSION: As a sucker for clean pitching mechanics, I’m inclined to lean ZANZIBAR.

You may not love his numbers, but Eric Hosmer is a winner, and has the Kansas City Royals World Series ring to prove it.

You may not love its bloodstained past carrying out morally repugnant black ops missions for the United States government, nor do you want to really want to dive into how ZANZIBAR became eligible for free agency, but ZANZIBAR has seven Kansas City Royals World Series rings with fingers still attached to pro–oh no.

PREDICTION: ZANZIBAR to the Diamondbacks for four years, $68 million. Love the front office they’ve got over there. 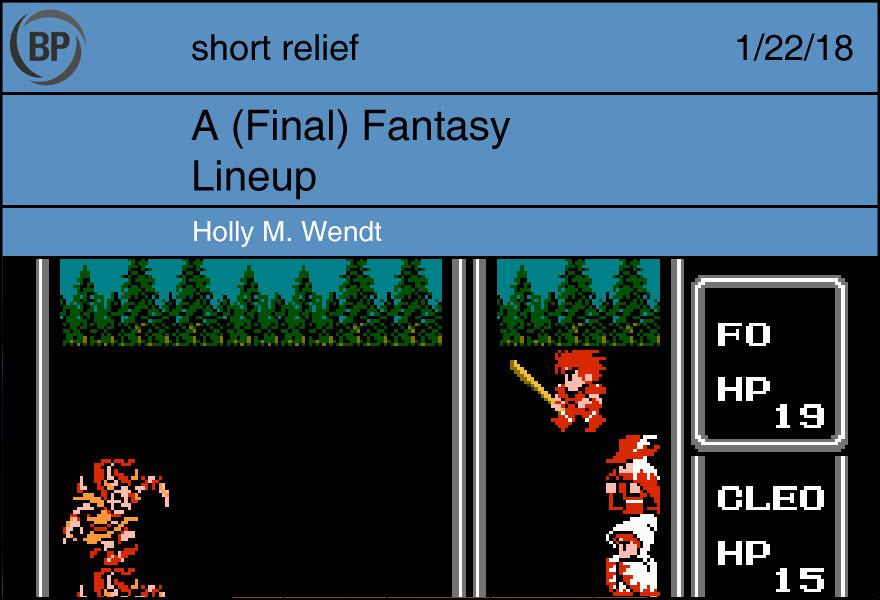 With each passing baseball-less day, my desire to make baseball, especially out of non-baseball things, grows. I’ve spread my favorite hockey team across a mental diamond, theorized a lineup out of the Fellowship of the Ring. It was only a matter of time before that spread to another winter pastime: the replaying of my favorite video games.

This roster is built from one character from each of the thirteen main Final Fantasy titles (not including sequel games like Final Fantasy X-2 or non-numbered titles like Crystal Bearers) that are not MMORPGs (thus eliminating Final Fantasy XI and XIV). Obviously, thirteen players isn’t a full roster, but it does provide a full starting nine, a reliever, a closer, a bench player, and a manager, and that feels sufficient for the exercise.

Starting Pitcher: Lightning (Final Fantasy XIII)
The protagonist of FFXIII and arguably the most effective combatant, Lightning is also possessed of a steely mien and unflappable demeanor. Primarily a fastball pitcher, she also has a deceptive slider.

Catcher: Basch (Final Fantasy XII)
What do you want in a backstop? Steadiness. A little pop in the bat doesn’t hurt, either. Given that Basch was wrongfully imprisoned in solitary confinement for two years but still emerged with an unbroken emotional compass and a near-monastic calm, he’s an ideal battery-mate for any pitcher. Great blocking skills and Pudge-like power make up for a sluggish throwing game.

First Base: Fighter (Final Fantasy I)
First base is the best position for the team tank. Best known for carrying unconscious party members through the last 30% of the dungeon, Fighter is certainly a three true outcomes hitter, but one more like early Ryan Howard than late.

Second Base: Faris (Final Fantasy V)
Faris is a pirate and is thus familiar with stealing—what it looks like, who’s got the guts to go through with it, and who’s going to chicken out—which is useful in a middle infielder. Faris also has a dragon. I’m not sure how that’s going to affect the outcome of a baseball game, but it bears mentioning.

Third Base: Luneth (Final Fantasy III)
He gets the title “the Light of Courage,” and that’s an important qualification for the minder of the hot corner. Also, as the protagonist in the first Final Fantasy game to utilize the job system, Luneth can adopt the skills your lineup needs most. At third, where offense and defense are both demanded, daptability is important.

Shortstop: Rikku (Final Fantasy X)
Even in-game her default stance is a crouched readiness, and since she mixes bombs with her bare hands as a combative skill, even the smokiest line drives pose no problems for her. On the basepaths, a constant threat to steal.

Left Field: Gladiolus (Final Fantasy XV)
He’s big and slow, but competent enough that stashing him in left field to keep his big bat in the lineup isn’t a hardship.

Center Field: Kane (Final Fantasy IV)
The good news: Kane is a dragoon, which means he can jump. Count on him to snag a lot of would-be dingers at the wall. The bad news: he’s going to sell you out, one way or another.

Right Field: Tifa Lockheart (Final Fantasy VII)
Tough and competent, Tifa won’t let you down in right field, and she’s got a disciplined approach at the plate.

Relief Pitcher: Mindu (Final Fantasy II)
In-game, Mindu is a temporary party member with way more magic than anyone else you have, which makes him your absolute key to survival in a number of quests. If ever there was a strategically placed fireman in the videogame, Mindu is it.

Closer: Vivi (Final Fantasy IX)
Another mage-pitcher, Vivi can literally throw fire, and his particular skills include Focus and Trance: clear signs of a Closer Mentality. Also, the mage robes and glowing eyes help to cultivate a elusive mystique to make up for Vivi’s otherwise unimposing appearance.

Bench: Gau (Final Fantasy VI)
Gau’s abilities are in blue magic, meaning he can learn to do just about anything. If this feral child can launch missiles like a MagiTek mech and cast Bolt 2 like a terrifying eel-creature, it’s safe to say he could fill in anywhere in the field you’d like to put him. He just needs a day or two between games to learn new skills. Due to his perpetual crouch, he also draws a lot of walks.

Manager: Rinoa Heartilly (Final Fantasy VIII)
While on the younger side for a manager, she is a trained strategist. Most importantly, she’s got a dog, Angelo, so now this team has a bat-dog, too. Prepare yourselves for joy and eventual heartbreak—which is what we’re already doing, here as we look toward spring and the time we can spend on real baseball and not exercises like this.

You need to be logged in to comment. Login or Subscribe
Shaun P.
I was thinking of Barrett as the manager, because I think he would throw fantastic tantrums on a Piniella level, but I like your Tifa-Rinoa combination better. Thanks for the awesome read, Holly!
Reply to Shaun