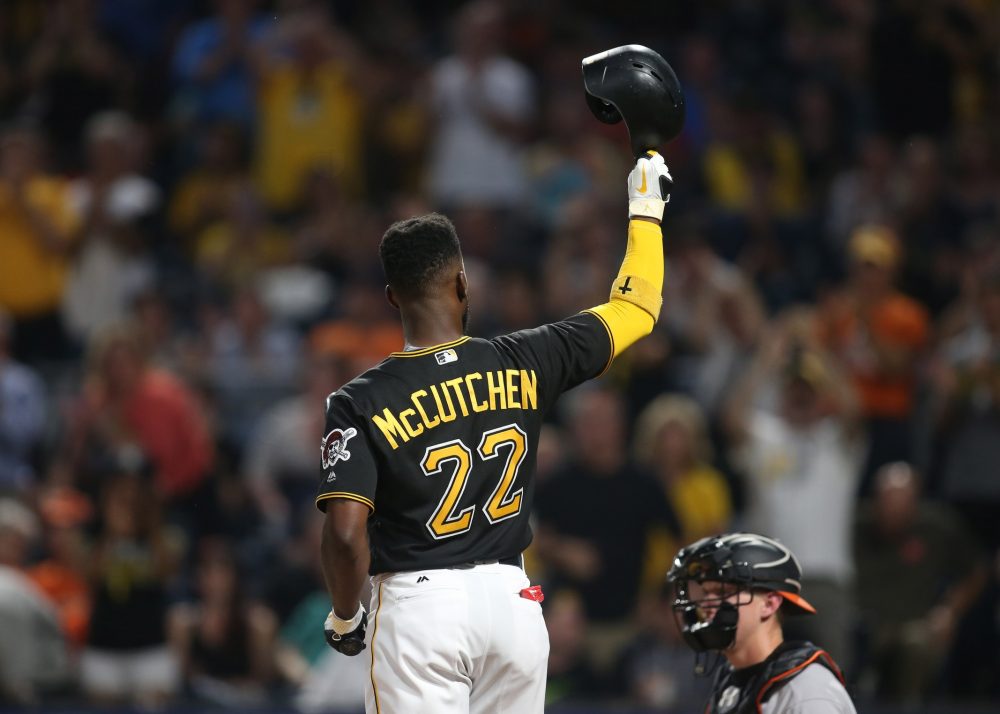 The game isn’t really ours right now. As the United States government undergoes technical difficulties, and the Yankees and Mets of modern American politics blame each other, baseball appears to be whispering the first words of a similar partisanship, a battle of millionaires against billionaires. The millionaires have had a rough go of it—and it should be no surprise, as America has always sided with the billionaires in times like these—but the business of baseball is a different sport, one without fandom. An offseason with few stories has quickly transformed into an offseason with one big story. Is it collusion? Tanking? Sabermetrics? Poor negotiation? Pitch clocks? Capitalism? No one is certain, except in one regard: the beer will still be $10 when the gates finally open.

When the Pirates banished their two biggest stars, it was at once the most conventional move in the world, and also a punch to the gut. In an age of playoff windows, a sine curve of rises and falls, the era of the single-team hero is dead outside perpetually competitive New York and St. Louis. The analysts who accept the systems, who seek to use them, will nod their head: The question wasn’t whether it was right to trade Andrew McCutchen and Gerrit Cole, but how well they performed the necessary act. The liberal arts majors, the ones taught by their high school English teachers and their bank balances to question the natural state of universe, look at the same situation and ask: Isn’t there a better way?

We, both here at Baseball Prospectus and in baseball in general, work in a forward-looking business. Forward is where the money is, and the wins that translate all too easily to money. Systems are seen as rules: concepts to be pushed against, bent, manipulated, sources of optimization. Pitch framing is, at its heart, pushing back the intentions of the rulebook: a weakness in the structure (the umpire’s ability for judgment) realized, its edges prodded and scoured for value. But there’s a value in history as well: history provides the ability to see that every system is a bandage slapped on another bandage. Baseball (and the American government, while we’re barely still on the subject) aren’t perfect diamonds, or examples of divine intervention: They’re hasty fixes, slapped on top of each other, ranging all the way back to the Bill of Rights, and the first moment baseball decided that pitchers could try to get batters out.

That we’ve reached our current situation without any agent specifically seeking it out makes it no less dire. More so: the future that stretches out ahead of us hasn’t been created intentionally, but as the unknowable product of a thousand other decisions and skirmishes on the way. The reserve clause, the suburbanization of white America, the opening of Cuba, Tommy John surgery: All these factors, inside and outside the game, have ripple effects on the systems by which baseball is shaped, and since there’s no one at fault, there’s no one person to fix it. All you can hope for is a particularly strong bandage, one that can stanch whatever the next crisis is when it appears.

This year’s PECOTA projections aren’t out yet; we’re mere weeks away. But it’s clear that the game, so mechanically oriented toward parity, is as divided as at any time since the peak payroll disparities of the 1990s. Only four teams—the Angels, Giants, Yankees, and Phillies — have made decisive efforts to improve their playoff chances in 2018, and one of them was prompted by the whims of baseball loot crate Shohei Ohtani. Other mid-ground teams like the Pirates and Rays, positioned if nothing else to dream, have shuttered six months ahead of schedule. It’s easy to understand how this phenomenon is simply the natural conclusion of the Astros and Cubs, the latest flattery of imitation, and the maximized efficiency of player value in the modern game. (Imagine how the Cubs wasted all those years of Ernie Banks!) It’s equally easy to understand this and still decide that, for the majority of fans, it’s a real problem. Or, perhaps, the newest symptom of something bigger.

The real problem with baseball, the thing that drives it to inhumanity, is the winning.

Winning is what separates what happens on the field from nearly every other aspect of our lives, and the blurry lives of the people who conduct it. You can’t win at painting a picture, or raising a child, or earning a salary, and every attempt to create win conditions for these things, contests and awards, twist them into something darker. To make any pursuit winnable, to eliminate its subjectivity or nuance into a strict set of repeatable, objective rules, turns that act into a copy of itself. Not that this is immoral—a rule set is simply a social contract agreed to by all players—but for the duration of that game state, those players are not truly free. They are actors. This is one of the reasons why baseball players wear uniforms: to denote their baseball-playing selves from their ordinary ones.

As a larger fan base, and particularly this small corner of it, we’ve largely embraced the movement of baseball analysis in the past 20 years. For the analyst, the opportunities of maximization and expertise are alluring; for the writer, the alternative to the petrified phraseology of coachspeak is a panacea. It offers less guidance to the people of Pittsburgh, or Tampa, whose teams have decided to stop trying to do the one thing our generation has been taught to care about.

So what alternative do the also-rans have? There’s the traditional alternative to real baseball, in the form of The Kids; tracking the lower levels, mapping out their progress, panning for gold. There’s nothing wrong with this, but there are a couple of dangers: for one, the arc of tanking to rebuilding to getting exciting has become so predictable that for those teams at the bottom of the organizational rankings, it’s yeoman’s labor. It’s also basically just caring about winning, still, only borrowing against the future.

There are fantasy sports, the geographic emancipator of the modern fan; yes, they’re equally exploitative of the labor of players, still carrying that same silent demand of player performance, but at least it provides the fan with agency. Active rooting becomes more difficult as one’s team scatters across time zones, but it’s fine to select your own team to root for, rather than have a pre-made build supplied to you. To extend the point further, one could retreat from the cold world entirely and dwell, like J. Henry Waugh, in the fictionary worlds of Strat-O-Matic or Out of the Park.

But there’s a final option, one that I think is cleaner, easier than the others. To care about sports is to enmesh one’s self into a tangle of conflicted allegiances and paradoxes, to align one’s self with corporations, employees, simultaneous joy and misery. On a recent episode of the Effectively Wild podcast, a Pittsburghian listener sent in an e-mail to ask: now that the Pirates have conceded, was it acceptable to throw his favor toward the new colors of his favorite player, Andrew McCutchen? Ben Lindbergh and Jeff Sullivan began with the obvious answer—fandom, being harmless, requires no permission—and Lindbergh cautioned that a dual citizenship between the Pirates and Giants would end in strain. But I would go one step further, and say: Follow your interest, but forget the Giants.

If you feel like everything is fine, that 2018 is a mere market correction and all you are is a good Lorenzo Cainn rumor away from satisfaction, don’t worry about all of this. But if you’re in Tampa wondering which shortstop is going to play first base, or a Kansas City fan whose small-market team fired its last bullet, do something. Push against the rules of baseball fandom that tell you that championships are all that matter. Spend a month or a season studying a single ballplayer, taking in their every at-bat, every pitch, and ignore the rest. Ignore the roster manipulation, ignore the free agent market, ignore the playoff odds. Watch Andrew McCutchen not for what he provides, but what he does and what he fails to do, delight in the trying. Make your fandom an empathy. Make the game yours again.

You need to be logged in to comment. Login or Subscribe
John Hicks
This is a very deep, wise, and insightful essay. It does offer us fans of teams unwilling to pursue winning a kind of “equipment for living,” which is very much appreciated. The trouble is, after following a very similar prescription from 1993 until 2013 as a Pittsburgh Pirate fan, I find it nearly impossible to “make the game mine again.” I’m too angry at being foolish enough to be duped by Nutting for the three wonderful seasons my Buccos finally gave me. Nonetheless, I do appreciate the sentiments of the article, enjoyed it immensely, and will do my best to take your advice and, sadly, come to the acceptance that Pirate management simply doesn’t care about winning.
Reply to John
Matt Wagner
Love the J. Henry Waugh reference
Reply to Matt