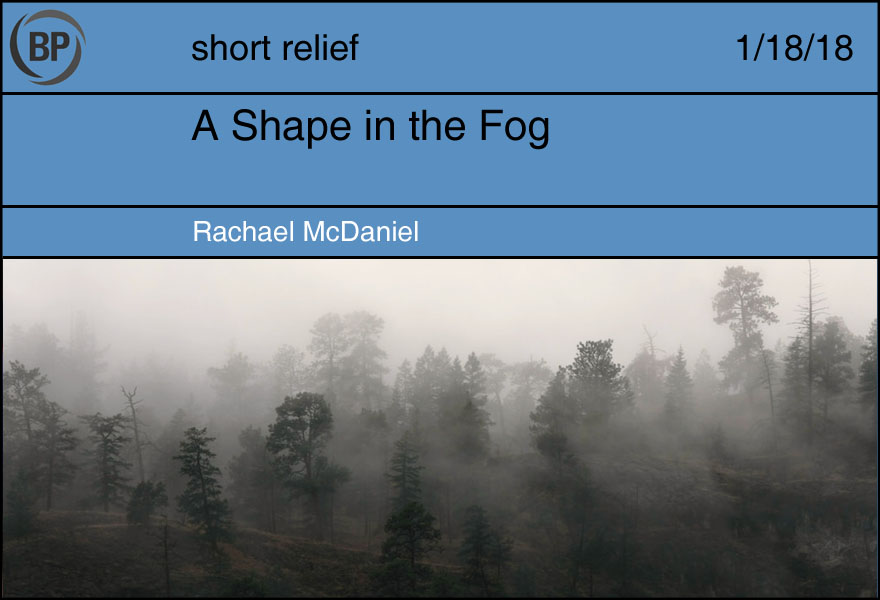 You are hiking through the forest on a foggy morning in late winter. The path you are on is a steep, winding uphill, and you don’t exercise much, and you can feel the fog filling your lungs with each labored breath. Up ahead you can see a steep stairway beginning to take shape in the mist. Your heart sinks.

You stop for a moment and squint at the stairway, trying to make out where the top of it is and where your friend must be. You open your mouth to call them, but stop yourself before you make a sound. It’s embarrassing enough that you’re so far behind. You take a deep breath and start trudging forward.

Your friend is the only reason you’re out here. As toddlers you played at the same neighborhood park, becoming inseparable; when you became old enough for Little League, you both begged your parents to sign you up for the same team. You played together until high school. You always got stuck way out in right field, but your friend was actually good. You quit baseball at 13, ostensibly to focus on school, but mostly because you were starting to feel inadequate. After that the two of you didn’t talk much. You were still friends on Facebook. They moved away. They were doing well. They liked hiking and the Dodgers. You figured the two of you would never speak again. But around a month ago they sent you a message: They were back in town, and they wanted to reconnect. You asked what they wanted to do. They suggested this.

You reach the top of the stairs. You feel like you’re dying. Your friend is waiting, looking concerned.

As the two of you continue along the path, noises begin to cut through the silence. Your friend stops.

“I think it’s coming from over there.” They point into the trees.

“Let’s check it out!” they say excitedly. Before you can react, they are making their way off the path. You follow as fast as you can, desperate not to lose them.

When you catch up, they motion you over to where they are standing against a decrepit chain-link fence. You come up beside them and look down. Below you is a small green field with a small dirt diamond, and on the field are two kids taking turns trying and failing to make highlight-reel catches. They keep slipping and landing in mud puddles, their gloves flying off, the ball nowhere near them. Every time this happens, they scream with laughter.

“I can’t believe I forgot about this place!” your friend says. “Remember? This is where we won the league championship. The year we were nine.”

You do not remember this at all. “Oh, yeah?”

“Yeah!” They smile. “Like, it was the first time we ever won anything real, and the score was something crazy low, like, 3-2. And I scored the winning run on a walk-off. And—oh my god, you drove me in! And we all went to Dairy Queen afterwards, and you got sick! And—”

They notice your blank expression. Their face falls.

“Do you seriously not remember?” they ask.

You don’t. You can’t bring yourself to say so.

The two of you stand in silence and watch the kids. They keep falling, and they keep laughing. 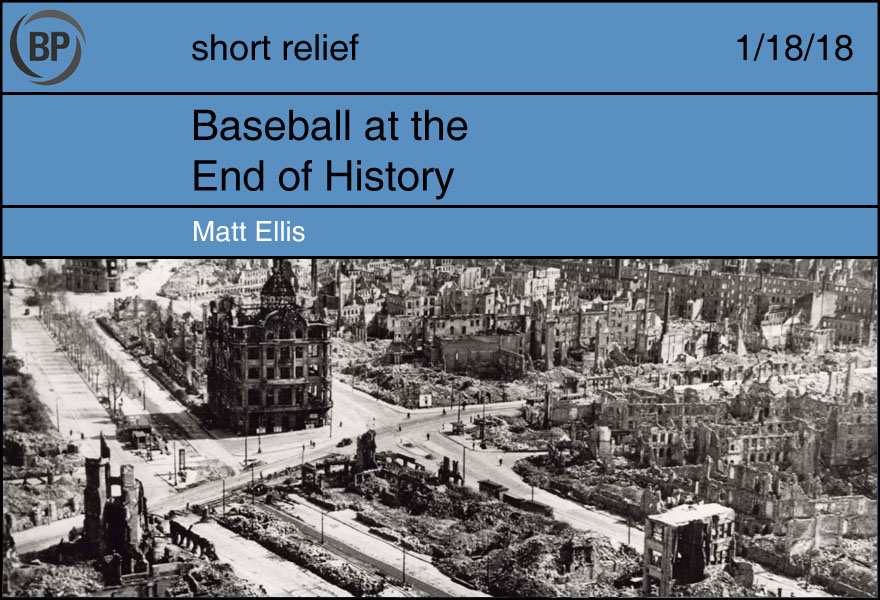 If not explicitly, we’ve at least been inundated with whispers of the thought of armageddon as of late. From worldwide political instability to the growing wingspan of North Korea, it seems we utterly misread “The End of History,” arguing that, no, post-cold-war liberal democracy might not be the final form of civilization while at the same time it should, no, wait, please, wait, we don’t need it to end, either.

The apocalypse and baseball aren’t exactly conceptual bedfellows, and to be honest, just writing that sentence has me rolling my eyes. Outside Don DeLillo’s Underworld, it’s possible they’ve never occupied the same sentence. But nevertheless, the game’s fundamental tie to the development of 20th century American modernity must necessarily be a branch sprung from the same tree–the nuclear age, the nuclear family, the country’s pastime.

I think sometimes about the discursive weight of history and continuity within baseball lore. As America’s oldest sport, the connections between mid-19th century dock workers and contemporary millionaires is at once obvious and yet comforting, comforting to the point of becoming a Ken Burns-ian banality. But why assume this continuity stretches forward rather than simply backwards? Why does the promise of spring during the cruelest winter assure us the snow will ever melt, ever disappear?

I can’t help but feel at times like the ground is slipping under my feet, a cavernous maw opening into a beyond no one was able to even comprehend a few moments prior (for pete’s sake–the Cubs won the World Series!) In part, this might be the simple reality of life in 2018. But at the same time, I wonder how many times this thought has been held in the history of the game–from the literal end of a world in 1914, to the horrors of the Second World War, Vietnam, the fall of the Eastern Bloc.

What happens when we promise there will be another year? Another season, another chance? In the “real” world we might laugh at this, but it seems to be utter doctrine when thinking about the game of baseball–and by extension, it then no longer seems quite so absurd when envisioning trade deals and embassy closings. There will be a first pitch in 2018, unless there isn’t (there will be). But until it happens, it never did. I try to remember that, these days.