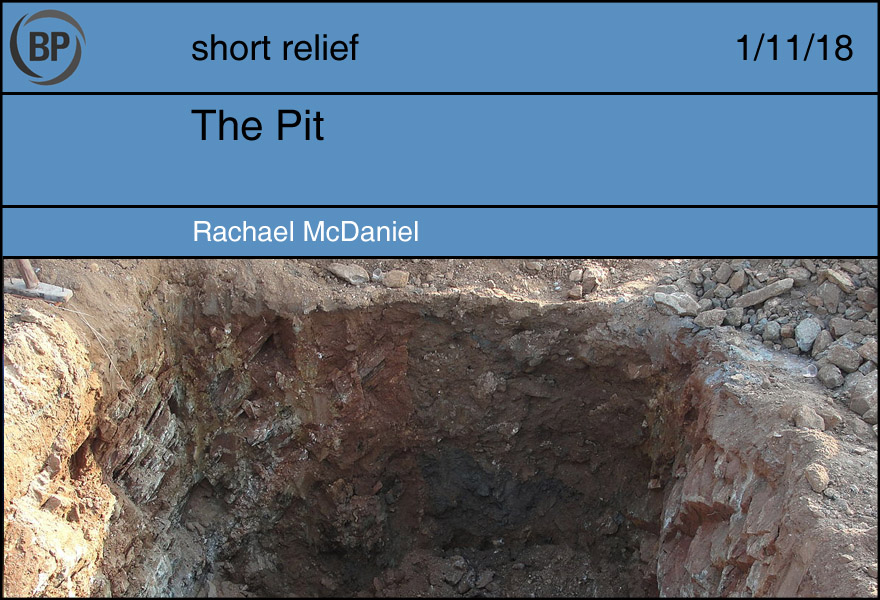 Your friend walks up and stands beside you. “Yup.”

You look, aghast, at the immense pit of mud and fencing in front of you. Though the fencing separates you and the pit, as you continue to stare at it, you feel like it’s expanding, like it might swallow you up at any moment.

You shake your head violently. “No way. No.”

Your friend sighs. “Unfortunately, yes.” They frown at the darkening sky. “Now can we please go back? I don’t want to get stuck out here in the dark.”

You barely hear them. You are staring into the pit, trying to visualize in its ugliness the place that it used to be. The little swing set and the patch of hard sand. The see-saw that had been broken as long as you could remember. The brick wall that you used to throw baseballs against. Your dad always hated that, because you scuffed all your baseballs to hell as soon as you got them. He kept having to buy new ones. You just kept throwing them against that brick wall. There was no more reliable companion to play catch with.

Your friend taps you on the shoulder. “Hello? You still there?”

“Yeah.” You turn to them. “Do you know—what are they going to build here? Are they building another park?”

They laugh. “Nah, dude, there’re barely any kids left in this neighborhood. This is gonna be, like, condos.” They take a few steps down the path, as if to lead you along. “Or maybe some kind of shopping complex? I have no idea. It’s gonna be something big, though.”

You once got a special glove for Christmas, the only time you actually got what you asked for. You had to have been around six or seven. It had some player’s autograph on it, some player who you idolized at the time and who ended up not being all that great. The best thing about it was that it was blue. It had white trim. You thought it was the coolest, most beautiful thing you’d ever seen. You refused to take it off, carrying it with you constantly, and your dad scoffed and said you would lose it, and you swore on your life you wouldn’t.

You lost it by the end of January. You kept looking for it until next Christmas. You combed every inch of the park fifty times over—you must have left it at the park, there was no other place you would have taken it. You made missing posters. You never saw it again.
“When did this happen?” you ask your friend.

“At least a year ago. Or maybe more? Who knows, honestly. I think the development got stalled for some reason.” They start heading back down the path. “Come on, I don’t have an umbrella.”

Your friend, without turning around, raises their hands in a gesture of futility.

“You’ve been gone for a long time,” they say. “I honestly don’t know why you came back. There’s nothing here.”

They disappear into the trees. You turn back and stare into the pit again one last time. In the dying light, you could almost swear you see a flash of something blue, down at the bottom of the pit, far beyond your reach. 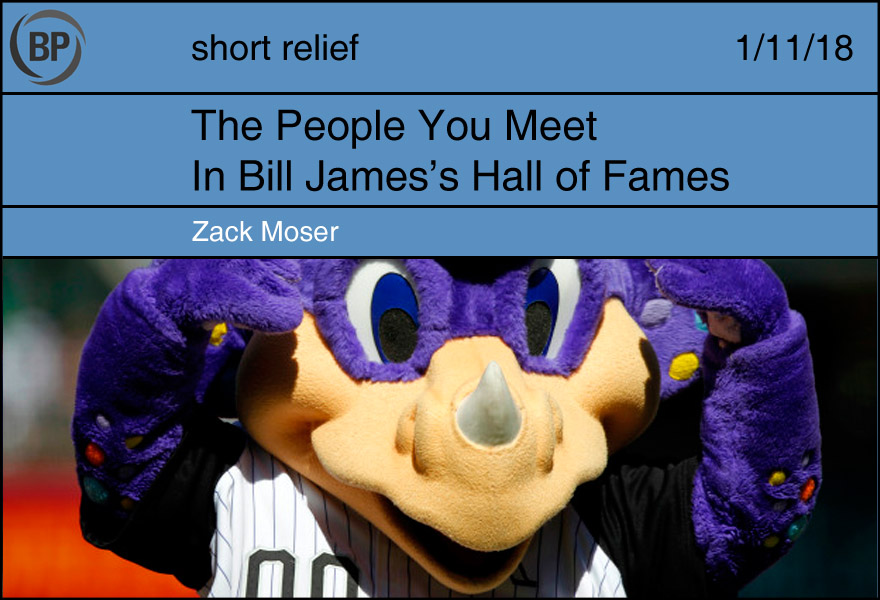 Robots who have to get into the Robot Hall of Fame before BB-8: Bender, literally every Cylon, Mr. Butlertron from Clone High, Buffybot, Voltron, Francis X. Clampazzo

Mascots who have to get into the Mascot Hall of Fame before Benny the Bull: Youppi!, Stanford tree, Mr. Redlegs, Bernie Brewer, Orbit, the Polish sausage, Sparty, Clark the Cub, Dinger, the chorizo, the guy in the Toronto Raptors mascot GIF 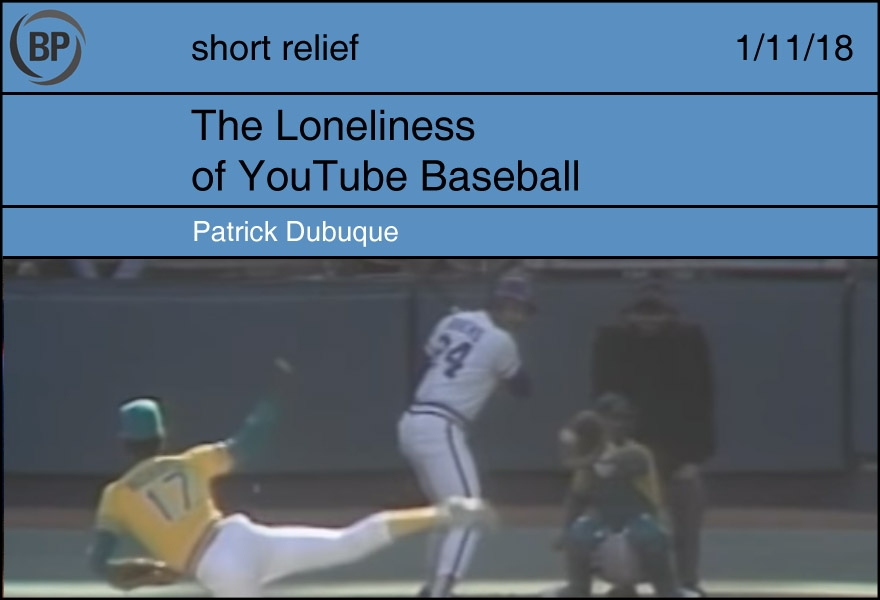 Mike Norris stands on the mound, tall and thin, his face blurred as if he were a watercolor painting or a member of the witness protection program. Behind him, the hills of Kaufman’s centerfield backdrop tower like they’re out of the old west. Norris, a member of the Momentary Hall of Fame, is pitching against John Wathan in Game 3 of the ALDS, but his rangy figure looks modern, out of place, as he winds up tightly and delivers. The ball floats high into the catcher and the illusion is dispelled: this is 1981, prehistoric baseball.

Beyond the grain of the picture the obvious difference is the camera angle, positioned behind home plate; the umpire, obscured by shadow, looks like the silhouette in an old Mystery Science Theater movie. The proceeding is a dizzying exercise in unexpected familiarity fractured by unexpected anachronism, just as quickly restored. The cadence of the announcer is familiar, as is the announcer himself, Al Michaels. Then a cut to the centerfield camera, followed by Wathan standing so far from the plate that he threatens its borders as much as Carl Everett ever did. Two visits to the mound in two pitches: painfully familiar. Billy Martin, sporting a gleaming emerald windbreaker with an A’s logo almost bigger than his chest: reminds you that Empire came out around this time.

MLB occasionally cleans out these unlicensed feeds; most on the MLBClassics channel have been deleted. Perhaps this one survives because it appears to have been uploaded by Norris himself, saved from his own collection of videotapes.

These old recorded games feel clandestine, slightly shameful, as if tucked away from the average baseball fan: the embarrassing juvenalia of a now-famous author. The historian in me enjoys taking in the look of the game itself, tracking the changes and the patterns, as Matt Trueblood wrote about last year. Or the experience of seeing old favorites suddenly younger than myself: Rickey Henderson at the plate, coiled into that impossible crouch, hands and legs jittery with anticipation.

But in the end, watching YouTube baseball feels a little sad to me, and not because the result of the game is long concluded and meaningless; they are all meaningless. It’s because baseball is chiefly about connections: between the fans and the players, between the fans and each other, the collective will and the shared dream. Here, age has wiped away so many of those bonds, muted the cheers: you can place yourself in the moment, make yourself a 1981 fan, but your feelings can never make the trip back with you. No one else will really get it, no matter how you try to paint the picture.

Perhaps the solution is to make a contract of it: for everyone to take some cold January evening and choose the same place, the same time, and go there at once, dream the same dream. To make a holiday of it, or a tradition. If nothing else, we might be able to feel isolated together.

You need to be logged in to comment. Login or Subscribe
jnossal
Bon Jovi is the Phil Rizzuto of the RR Hall of Fame.
Reply to jnossal