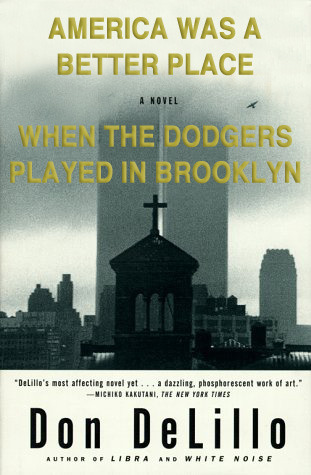 The opening section of Don DeLillo’s magnum opus, Underworld, is actually the whole of a short story he published five years earlier, with a few minor changes. That story, “Pafko at the Wall,” is a brilliant flash of mid-century American anxieties and hopes, dashing the famous Dodgers-Giants playoff game featuring Bobby Thompson’s walkoff homer against the knowledge of the Soviets’ successful nuclear bomb test that same day. We, of course, are treated to unique perspectives on each: our primary characters are two sets of men, one comprising the quartet of J. Edgar Hoover, Frank Sinatra, Jackie Gleason, and Toots Shor; the other, a hooky-playing boy named Cotter, and the man whom he befriends during the game, named Bill.

While Hoover receives word about the bomb test and ogles a grotesque Bruegel painting printed in Life magazine shreds that rain down from the second deck, Gleason hurls his hot dogs and beer on Sinatra’s shoes, and Cotter jostles with Bill under the seats for the ball that Thomson had only just launched into the left-field bleachers. The air at the Polo Grounds is thick with historicity. DeLillo deliberately weaves a dense, entangled story to play with the idea of historical contingencies and the way that American historical consciousness realigned in the wake of the Second World War.

The baseball itself soon figures in the larger story of Underworld, a sprawling novel that takes head on the totality that confronts and connects our disparate characters. There’s a passage explicitly comparing the ball to the grapefruit-sized heart of an atom bomb, imbuing the ball with meaning not due to its playoff importance, but due to the totality of social, political, economic, and ideological structures that would compel a man like our primary narrator, Nick Shay, to desire to possess the ball despite being a Dodgers fan. Shay, by the way, is an executive in a waste disposal company, occupied with discovering—and monetizing—new ways to inject the unthinkably massive detritus of the twentieth century far into the earth, entombed in lead. He wants to possess the ball, and its attendant histories, in order to kill it, as he and others move headlong into a post-Cold War world.

The hopelessly complex, interrelated, tangled world, condensed in the ball. It’s an act of personal, moral necessity for Nick to possess it, to ponder the failure and loss of innocence it represents, but it’s a political act too. The atom bomb, the fighter jets and missiles his physicist/defense contractor brother helped create, the mountains of waste piled high on Staten Island and in the desert—the violence of totality. All in the ball that Bobby Thomson struck to win the Giants the pennant.

I used to be terrified of showing anyone my writing. I know that this is a common symptom of being a writer—disparaging your own work, thinking it’s bad, being burdened by self-doubt. It’s the artistic temperament or whatever. But my fear verged on the pathological. Teenage writing is supposed to be shameless; I felt literally nothing but shame. Before handing in assignments for English class, I would preface them with pages-long apology letters, pointing out the mistakes I knew were in the work and apologizing for wasting the teacher’s time. Afraid that someone would read the journals I constantly wrote in over my shoulder, my handwriting grew smaller and smaller, panicky and scrawled, to the point where I could fit a thousand words on a three-by-five-inch page. 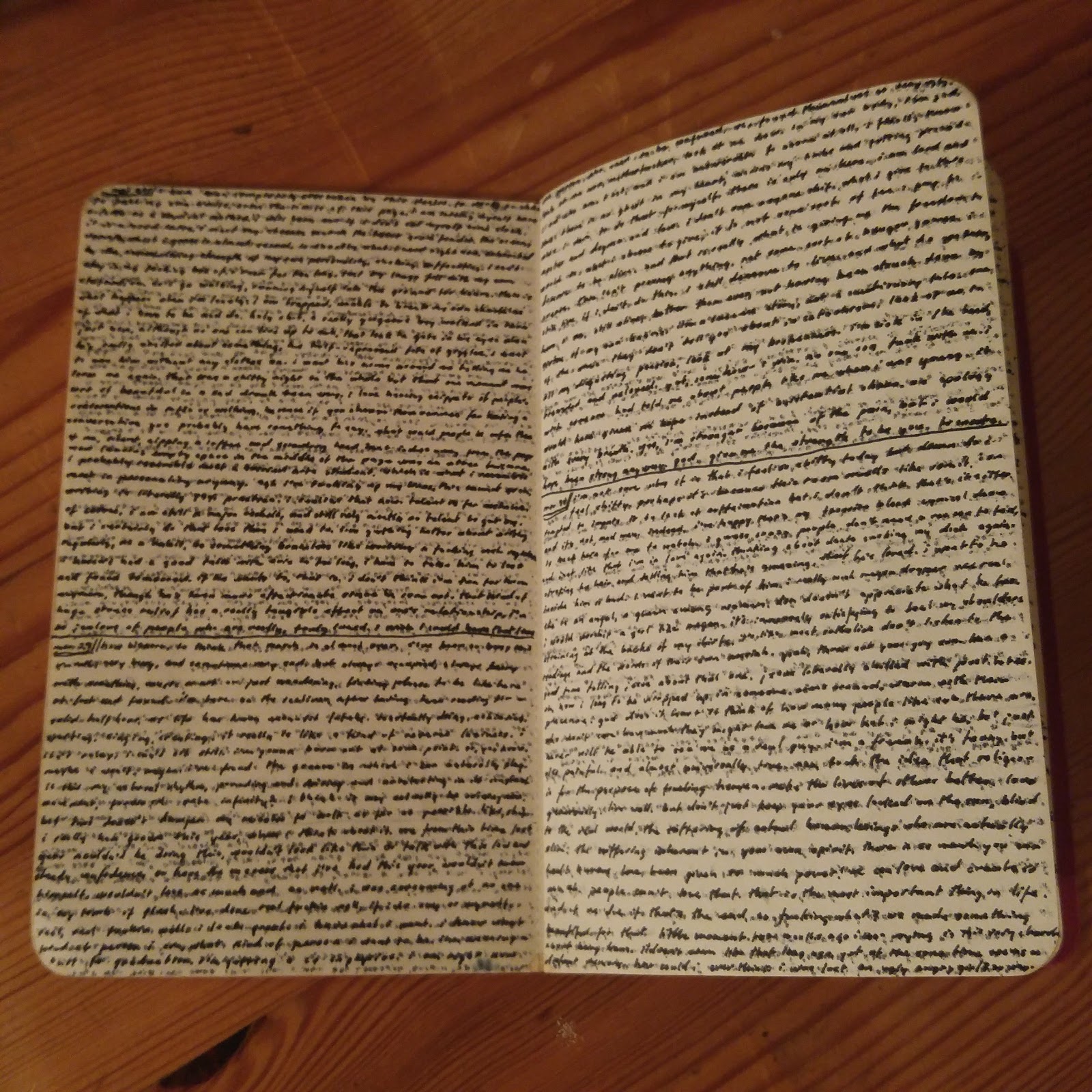 My fear, I think, was that in making myself legible, everyone else would know what I knew about myself. They would know I was evil and ugly and hopeless.

I became friends with Eric because he dated my then-best friend in the seventh grade. The relationship lasted for two or three very dramatic months. High school began, and, perhaps counterintuitively, I found myself hanging out with Eric more and more. We mostly just went on long walks. We would walk straight along roads until the roads ended, and then we would move onto other roads, and then to train tracks, and then to cliffs, and then down slopes covered in ivy. It was usually raining, and we never had umbrellas, and in my memory there was never anyone else around. No cars or people or noises. No interruptions. No one watching. Nothing subject to any outside interpretation. That quiet alone space felt important, even though we must have talked mostly about nothing. Sometimes in the middle of the nothing we said things that turned out to be important. Like, “I’m gay.” Like, “Me too.”

And whenever I wrote anything real, I sent it to him first, into our quiet alone space, and he would tell me that it was good, and then give me a few editorial notes, and then he would tell me, in conclusion, that it was really, really good. And I always said, no it’s not it sucks i’m so bad. I can’t have believed that, though, because I kept on writing things and sending them to him, and he kept reading them and telling me they were really, really good.

It’s easy to be best friends in high school, even though teenagers are so volatile and apt to change, because you are around each other constantly. You have time to understand each other, to spend talking and crying and walking, finding new places. After that, there’s less time. Best friends move away, go to different universities, have new relationships, have jobs, start watching three-hour baseball games every day, start writing about them. The connections between thoughts are less implicit, the gaps in knowledge wider. The quiet alone spaces become smaller and smaller. You have to work hard to find them.

The last time I saw Eric was on his birthday in August. I told him that I had a new writing thing that I was really excited about, this thing Baseball Prospectus did called Short Relief that I thought was super cool and had spent the summer wishing I could write for. He seemed excited by my excitement, even though he had no idea what talking about. He told me he hadn’t read any of my pieces since the first one at BP Toronto, because he doesn’t get baseball. (Eric has never liked sports.)

I still apologize at the end of all my school papers. I often attach apologetic notes to my baseball pieces, too: sorry this took me so long to write. sorry this is so long, ugh. sorry this is bad, i’m stressed out/tired/depressed/a hack. Old habits die hard, I guess. But I am no longer as scared of being legible. I’m not entirely sure why this is, but I feel more open, more understandable, when I am writing about baseball than any other time. And I feel less afraid. Even though it’s not just one person, but all of you, now, understanding me.

I would likely not be alive today without Eric; I would certainly not be writing. I wonder, sometimes, if I would have rediscovered baseball and found this new way to be read if he hadn’t moved away that summer—if, somehow, that too was a gift he gave me. If, perhaps, the quiet alone spaces haven’t gotten smaller, but instead have grown beyond the limits of my sight.

Baseball was my childhood, and baseball is my adulthood, and in that darkness in between, when I was constantly terrified, afraid of being understood and of understanding myself, Eric was there. A light, a quiet way of knowing. He read me at my worst, and told me I was really, really good.