The Man Who Could Walk Out of the Sea

When the sun came up on Puerto Rico on New Year’s Day, 1972, it rose on the citizens of the island already awake, lining the island beaches. They carried transistor radios and lights and babies, and they carried something much heavier, heavy the way impossible things are heavy: their disbelief. Clemente was a god, and what god could fell Clemente? They studied the blue expanse before them, calling out to one another, and patiently waited for their hero to walk out of the sea.

In the book of Matthew, Jesus sends his disciples out on a boat. The waters are turbulent and the disciples become afraid but then Jesus appears, walking on the water, and tells them to be not afraid; tells them, in fact, to be of good cheer. The disciples struggle, a little, to let go of their fear; they have to be shown that in the midst of the storm Jesus can still deliver them to safety. That’s how things are, in the storm–it’s hard to see out of. It’s hard to imagine, in the middle of a storm, that there will ever be another time, a not-storming time, even if you know from previous experience that the storm will pass eventually. But what if. What if this is the time it doesn’t? What if this is the time everything is pulled away? A measure of faith is necessary.

So the citizens of Puerto Rico, devout as many of them are, stood on Piñones Beach and tried not to be afraid, to have faith. The waters were dark, storm-tossed and shark-infested, and still, still they believed he would walk out of the sea.

My uncle Carl was built like Clemente, with the same movie-star good looks, all barrel chest and broad shoulders tapering to a narrow waist, with biceps the size of the fenders he tossed over the side of his boat. He looked like a 19th century stevedore but was a man of great faith and greater tenderness. He also spoke in a soft voice, in the way that certain men, men of great power and confidence, do; men who know they don’t need to shout. It took an especially aggressive form of cancer to fell him, and yet we all sat with him, day after day, expecting the disease to change course, for the cancer to realize what it was dealing with; we expected him to walk out of the sea. At his memorial service the choir sung Be Not Afraid, but I was, and still am, terrifically afraid of the forces that can cut down the men we know as gods, and in mourning for the loss of people like Clemente, and my uncle, and the others like them lost in a storm where we are still, over 100 days later, struggling to calculate the toll of loss. There are so many of us standing on those darkened beaches, hoping to see a sign, taking whatever comfort we can in the fact that at least the sun will rise, trying our best to look through the storm to find a measure of faith.

This June, like every other June, a group of people will stand on the beaches in Puerto Rico and walk backwards into the sea. They will dunk their heads beneath the water and ask for forgiveness for their past sins, to walk forward with a pure, clean heart. They will ask for change, and some of them will be granted this wish. They will walk out of the water, intent on living their lives a little better, a little more like the man who worked for the betterment of all people regardless of who they were, a man who called Puerto Rico home, who was called home there again.

Dylan Baker is involved in this bit of news. I do not understand why he was, until now, in Milwaukee. I do not understand what is in Milwaukee that could have any use for Dylan Baker. I do not understand what is in Dylan Baker that could have any use for Milwaukee. Did he visit Germans in their homes, in their skyscrapers, in their driveways and buses and trains, in their dreams. Did he tantalize them with visions of a false reality, false because all reality is false. Did he explain. Belgians! Did he walk the halls of the rest homes for antiquated, used-up, unfashionable, unspeakable Belgians, moaning and rattling his jar of desiccated fingerbones. Did he, did he participate in the less mundane, more occult, more full-moon, more howling and slavering at the blackest sky, the deepest forest. Did he stoke the green fire, did it turn purple and blue, red, then purple and green again. Did the boil purify, reduce to its essence, shimmer away the unnecessary, the waste, the pointless. The pointless! Did he! My god did he clutch and rake and rend and shake all he had at all there is until all that remained was the brightness. The sun, the moon, the whole of the shining universe … in him. In Dylan Baker. In Los Angeles.

Reading a Book in the Offseason

There’s a certain feeling of safety I get in doing precisely two things: watching baseball and reading books. Though they largely exist as separate entities–my summers are defined by many hours spent with baseball and few with books while winters are the opposite–one is constantly used to supplement the other. In the summer, I fall asleep to the sounds of a west coast game and in the winter some trivial book takes up this task. In the summer, five-hour, rain delay-filled games test my endurance, while Rousseau’s Discourses does the trick in the winter. In the summer, my life revolves around the predictable unpredictability of baseball, and in the winter, Socratic dialogues dictate my schedule.

But more than that, both books and baseball offer a certain reassurance. Regardless of the outcome, each follows a similar process and contains an inherent logic. A baseball game is divided into nine innings, each of which contains half-innings that must be completed before moving on to the next inning, and a book is composed of chapters that lead into each other, comprising the entirety of the book. Each deals with characters that have their own certain predictability, whose patterns can be analyzed over the course of a season, a career, or a series of books. Each author’s work, like a player’s season, can be broken into distinct elements, syntax, grammar, and punctuation acting like games, at-bats, and pitches.

For me, the act of reading a book becomes like keeping score of a game, transforming a fairly passive event into an active one and pushing me to uncover details and facts that might otherwise be lost in the moment. Reading books is a task involving both mental and physical elements, and thus each book I read contains a part of me. 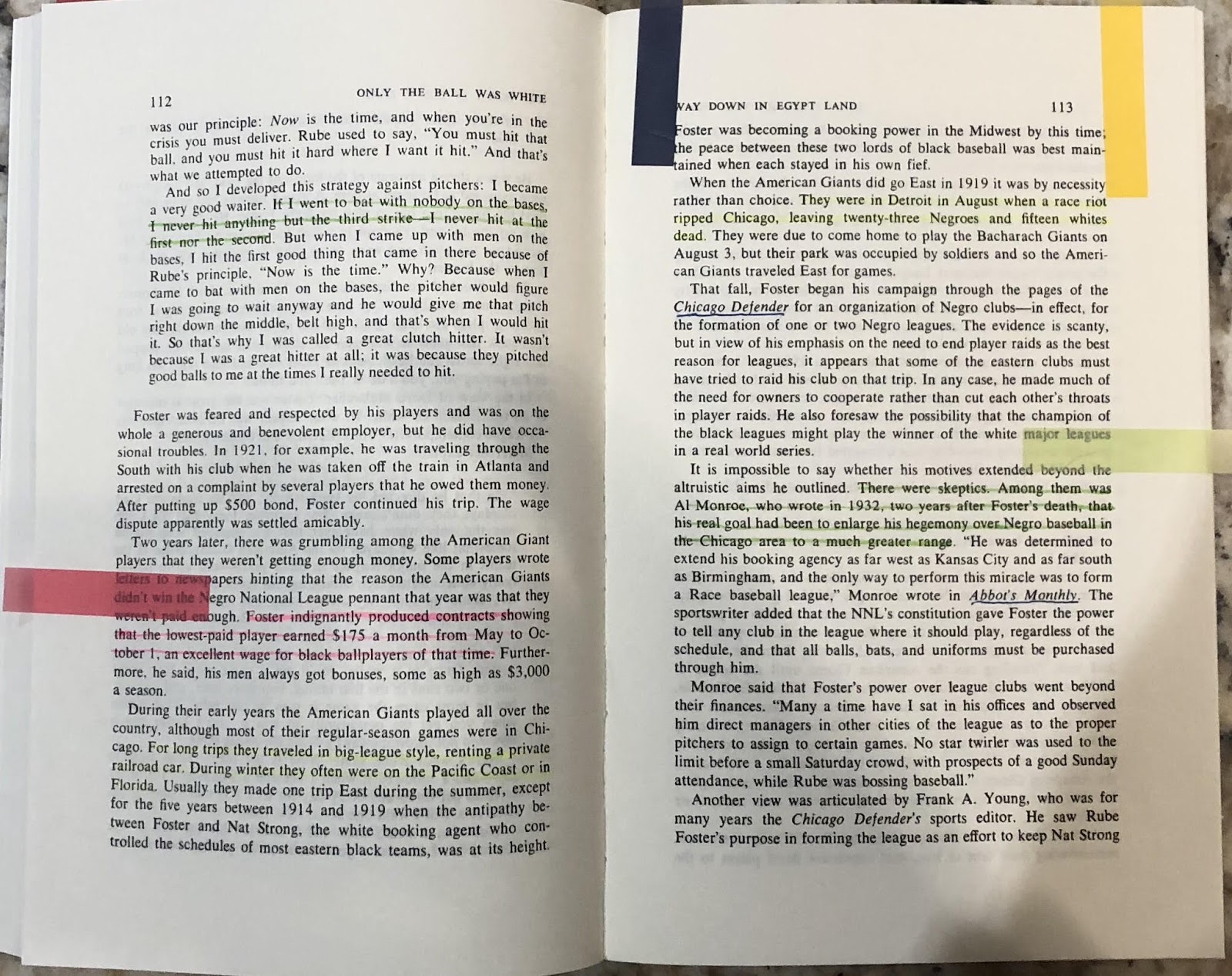 To any outsider examining my books, they might seem like an overwhelming mess of lines and color, but there does exist an inherent logic. In this particular book, pink corresponds to personal facts, green to anecdotes, and yellow to historical details, with navy signifying the introduction of a new source. The precise colors may vary from book to book, but the method remains the same. It is constant, unwavering, and yet lends itself to creativity, whimsy, and a little bit of suspense. And so when there is no baseball to occupy my time, I line up my sticky flags, highlighters, and pens, and grab the nearest book.