It’s On the Syllabus

It’s the first of the year, and I’m planning for the spring semester, charting out assignments and due dates for a brand new baseball literature course I’m teaching, its roster full of students who aren’t English majors. A syllabus is a series of hopeful resolutions, a declaration of intent and order—just the thing for New Year’s Day, its deluge of good intentions. A syllabus declares its faith in the course plan, in the way each week’s reading will echo productively against the previous, in the way the skills practiced in the first writing assignment will be sharpened in the second. A syllabus believes everyone will do the reading.

Of course, a syllabus is a little more than a document of wholesale optimism; a syllabus contains those necessary advisos about absences and late work, needful explanations about what must be done in order to pass the class. A syllabus must address the what-ifs: what if someone breaks a leg and misses a week, what if someone is visited by consecutive disaster and misses a month, what if someone sleeps through an exam? It is difficult to plan for every possible contingency, but a syllabus has to try. A college has policies, rules about these sorts of things; one has to be aware.

Here on the far side of winter meetings, here when pitchers and catchers report next month, baseball teams are considering the same questions. Okay, they’re probably not trying to figure out the best way to assess critical reading skills, but they’re looking at the schedule, at the toughest assignments stretching out before them. They’re planning for contingencies—minor league depth, platoon success and platoon failure, financial risk—and deciding what must be done in order to pass, be it into the next phase of a rebuild or finally into the degree of post-season success that meets the team’s potential.

I’ve chosen Fernando Perez’s “Para Rumbiar” as the first reading of the semester. I know my students will expect to read writing about baseball, the literary kind—poems full of metaphor and novels that allow us to argue about the applicability of Freytag’s pyramid and discuss the differences between third person omniscient narration and free indirect discourse—but I doubt they’ll expect to read a literary essay, peppered with the names of poets and trimmed with its own graceful flourishes, written by a baseball player. 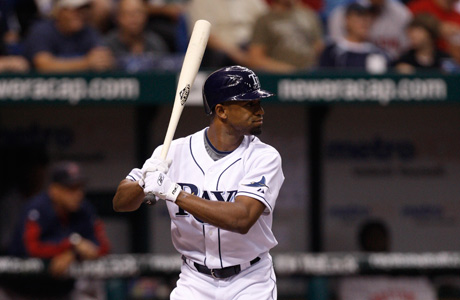 It’s unlikely that my students will remember Perez’s short playing career. He had fewer than a hundred at bats nearly a decade ago, but that he did make the majors won’t be lost on them. What else I hope won’t be lost is that here is a player who is doing and who has done what I’m asking the class to do: to think as carefully about the arrangement of words—their own words and others’—as their favorite teams are thinking about the rhythms of hitters in a potential lineup, the envoys of their bullpens, in the pursuit of something that is, by one definition of the word or another, beautiful.

I buy too many baseball cards. Too many for anyone, really, but too many especially for someone who does not particularly like baseball cards. It’s not that I dislike them—I don’t—but rather that I don’t have any special fondness for them, and I never really have. I do have a reason for buying them. It’s not a good reason, but still: it’s the feeling of opening a pack. I don’t care so much about the contents, but I love (recklessly, dumbly, intensely) the sense of possibility that accompanies the first little tear of the plastic wrapping and that follows until every last card has been turned over and all their identities are known. 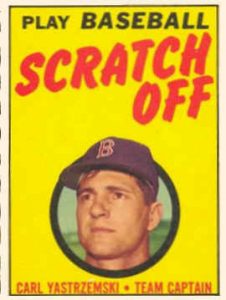 I first thought to compare how I buy baseball cards to how other people buy scratch-off lottery cards. The card, in either case, isn’t really what you’re interested in buying. The card is only valuable insofar as you can daydream about it. The card doesn’t matter. It’s what the card allows you to think about in that delicate liminal space between when it’s purchased and when it’s revealed as itself. But that comparison doesn’t quite work, because this daydreaming makes sense with a lottery card and doesn’t with a baseball card. Someone buys a scratch-off card, even if he knows the odds are ridiculous, because maybe it might scratch off just right and then everything will all pay off and his life will change forever. I don’t know why I buy baseball cards. Even with the longest odds, there is no potential pay-off here.

I never know what to do with the cards once I’ve opened them. I’ve moved three times in the past year and a half, and every time has made me consider this question anew—each apartment had a drawer in my nightstand or a portion of my dresser-top or, worse, a section of the already cluttered kitchen table that became home to my abandoned baseball cards, discarded after I’d opened them and read their names and realized I had nothing left to feel about them. It’s not that I’m looking for favorite players or guys from my favorite team or cards with an especially cool photo on the front or fun fact on the back. Those things are nice enough; I’ll take any of those cards over, I don’t know, your average Erasmo Ramirez one. But they’re not what makes me keep buying them. I keep buying them for that moment when I’ve made a clean rip through the plastic and hold the cards in front of me and am just about to flip the first one and see what I have.