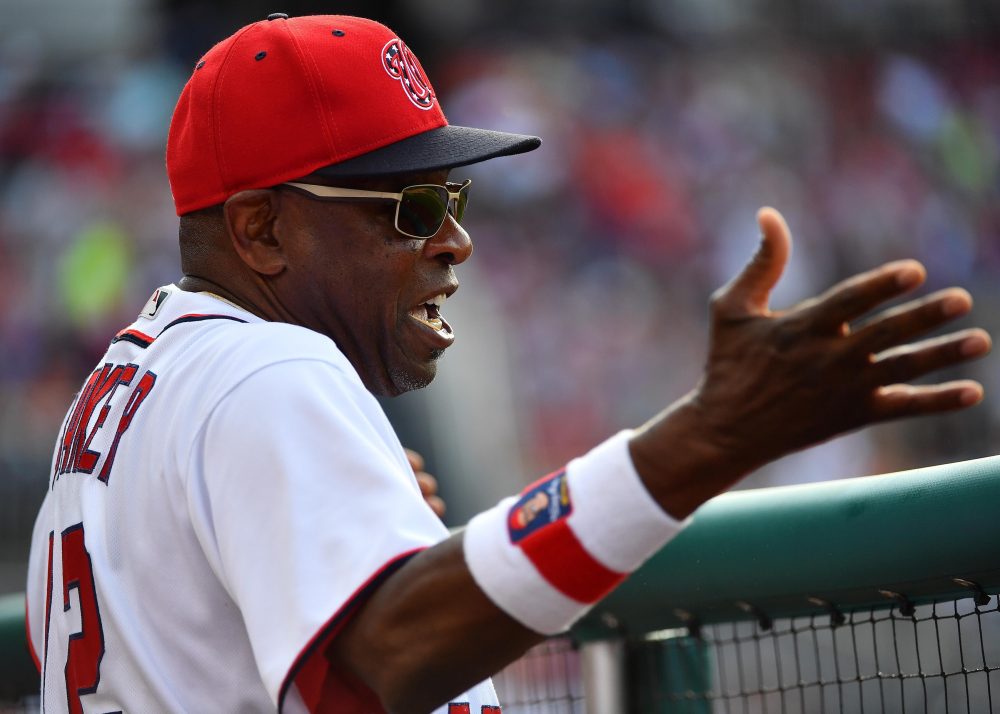 What made me think of this, as you might guess, is Dusty Baker.

When the Nationals announced Baker’s firing, a lot of Baker discussion ricocheted around the internet. Some was fond. Some wasn’t. This article, deep from within BP’s archives, made the rounds.

It’s from March 2004, after Baker had completed his first year as manager of the Cubs. This was nearly 14 years ago. For those of you who’re at least, say, 38 years old, think back to March 2004. What were you like then, professionally? Probably different than you are now. You’ve learned some lessons, some of them hard. You’ve let go of ideas that proved to be wrongheaded, and adopted new ones in their place. You haven’t fallen prey to foolish consistencies.

But Baker’s never been able to fully outrun some of these quotes. Let’s evaluate the most damning of them.

“Sooner or later, somebody is going to get hurt, and then they are going to blow it all out of proportion … But go back and look at the overall picture. For a guy who is supposed to have run pitchers into the ground, look around and see our track record of how healthy our pitchers have stayed. Who has had healthier pitchers?”

Two of the three were never the same. Prior pitched parts of the next three seasons, compiling a 4.27 ERA over 329 innings, before injuries ended his career. Wood lasted another nine seasons but never qualified for the ERA title again, eventually converting to relief in 2007. For the rest of his career, he pitched 477 innings with a 3.77 ERA. Only Zambrano was unimpeded, as he started 30 or more games in each of the next five seasons. While he was only 31 when he threw his last pitch, his demise was perhaps a product of poor control rather than a destroyed arm.

So yes, Baker was arguably complicit in the breakdowns of Wood and Prior. And that was a mistake. But did he display a foolish consistency, continuing to run his pitchers into the ground?

Here’s a chart showing the percentage of pitchers, under Baker, whose starts exceeded 100 pitches. I’ve color-coded the chart: orange for Giants, blue for Cubs, red for Reds, dark red for Nationals. The solid black line indicates the National League average during the years 1993-2017. (Baker didn’t manage in 2007, 2014, or 2015). 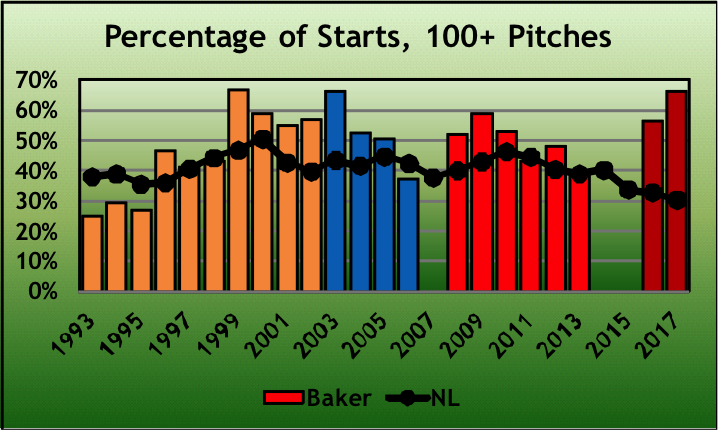 So yes, Baker has pretty consistently had his starters throw 100-plus pitches more frequently than average. But there’s a big caveat. Baker has generally managed good teams, with winning records in 14 of his 22 seasons. Good teams usually have good pitchers. Good pitchers are more likely than poor pitchers to last 100-plus pitches. Letting Max Scherzer throw 107 pitches when he’s cruising isn’t foolhardy. Letting Ubaldo Jimenez push his pitch count above 65 when it’s the third inning and he’s already given up nine runs isn’t a viable option.

So let’s look just at games in which Baker’s starters threw 120 or more pitches, as the young trio of Zambrano, Wood, and Prior did 28 times in 2003: 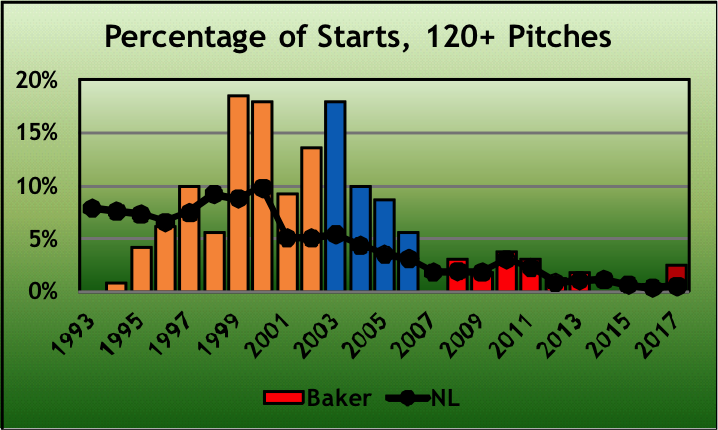 As you can see, Baker started riding his starters hard in 1999, reaching a peak, relative to the National League, in that 2003 campaign. But he learned something during his Cubs tenure, and, like the league as a whole, became reluctant to run up his starters’ pitch counts. Let’s zoom in on his Cincinnati and Washington tenures: 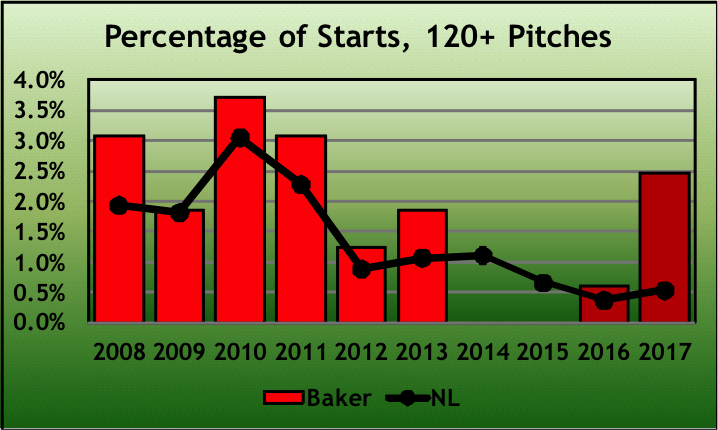 Yes, he’s still above the league average, but we’re talking very small numbers. In 2016, one Nationals starter—Tanner Roark, April 23, 121 pitches in a 2-0 victory over Minnesota—threw 120-plus pitches. That was enough to slightly exceed the NL average. This year, Scherzer (June 21 and July 7), Roark (May 2), and Gio Gonzalez (August 20) had games with pitch counts of 120 or more. At the time of those games, Roark was 30, Gonzalez 31, and Scherzer 32. Baker doesn’t mess with young pitchers’ arms anymore. No foolish consistency.

“I think walks are overrated unless you can run … If you get a walk and put the pitcher in a stretch, that helps. But the guy who walks and can’t run, most of the time they’re clogging up the bases for somebody who can run.”

While the usage of Prior and Wood was probably the biggest knock against Baker, the above quote gets the most ridicule. Walks are good! They contribute to offense! Given the choice of clogged or unclogged bases, always go for clogged!

Yet, you have to admit, there’s a truth there, if one that’s not well-stated. Little League coaches’ admonitions aside, a walk isn’t as good as a hit. If there’s a runner in scoring position and first base is open, a walk isn’t going to advance him. We already know that. Bill James’ original Runs Created formula gives walks the same weight as hits in its “On Base” component, but gives walks a weight of only 0.26 compared to singles in its “Bases Advanced” component.

And once a batter’s on base, his speed does come into play. This season when Byron Buxton was on first or second when a batter hit a single, or on first when a batter hit a double, he took an extra base 71 percent of the time. He had an on-base percentage of .314. That’s the same on base percentage as Mike Moustakas, but Moose took an extra base only 13 percent of the time—he went first-to-third on a single only once in 19 chances and never scored the 13 times he was on first when a double was hit. So Baker has a point: Moustakas’s .314 OBP didn’t contribute as much to Kansas City’s offense as Buxton’s .314 contributed to Minnesota’s.

But did Baker’s teams actually eschew walks, emphasizing aggression at the plate over patience? No, they did not: 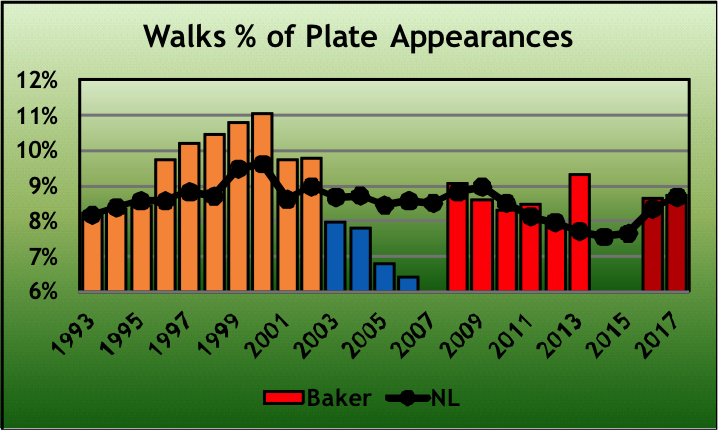 While he was in San Francisco, NL hitters walked in 8.8 percent of plate appearances. Giants batters did so in 9.7 percent. In Cincinnati, Reds batters had an 8.6 percent walk rate compared to 8.4 percent for the league as a whole. In Washington, the team walk rate was 8.7 percent vs. 8.5 percent for the league. Only in Chicago—where he managed free-swingers like Aramis Ramirez, Corey Patterson, Michael Barrett, Ronny Cedeno, and Neifi Perez—did his teams walk at a below-average rate.

So the complaints about Baker? They’re not really fair. He doesn’t have his batters avoid walks, at least to any extreme degree, and while he rode young pitchers hard a decade-and-a-half ago, he learned his lesson, avoiding a foolish consistency.

Baker seems to be a good manager of people. Players enjoy working for him. He may not be the very model of a modern sabermetric general, but he’s not the dinosaur he’s made out to be, either. Certainly, he has his faults, as do we all. But a little mind doesn’t appear to be one of them.

You need to be logged in to comment. Login or Subscribe
tearecrules
You don't need to go back to 2004 to find BP writers giving Baker an undeserved hard time because they don't understand what the man was saying.
Reply to tearecrules
Rob Mains
In fairness, he hasn't always been the easiest guy to understand. Take his statements before the bizarre Strasburg controversy in the ALDS. It's pretty clear he was covering for his player, which is admirable. It's also pretty clear that the arc of his commentary was befuddling. In this BP writer's opinion, though, he learned from his mistakes, and seems to be a good manager of people and a good person.
Reply to Rob
Yah Mule
Any assessment of Baker's questionable pitcher usage should include his baffling decision to run Aaron Harang out as a relief pitcher to throw 63 pitches on two days rest, after he threw 103 pitches in his previous start and completely out of the blue, and then start him on three days rest. He finished 4th in Cy Young voting the year before Dusty arrived and his career fell off a cliff pretty much right after this mishandling of his arm.
Reply to Yah
Rob Mains
OK, had to look these up. The relief appearance on 5/25/08 was, yes, three days after his 5/22 start. Harang entered the game in the 13th inning of a 9-9 tie. He was the NINTH Reds pitcher on the day. (In that sense--using a bunch of relievers for an inning or less--he was ahead of his time!) Yes, he stuck with him for a long time, but he didn't have anyone else left. The next pitcher, Edinson Volquez, has started the 5/23 game. He'd run out of pitchers. (I can offer no excuse for then starting him on three days rest)
Reply to Rob
Rob Mains
As for 2007: Yes, Harang was really good that year. And yes, he was considerably worse after Baker arrived. But I'm not convinced of the causality. I'm with you that starting him on 5/28 after the long relief appearance on 5/25 was bad. But over the season, Harang averaged 105.6 pitches per start in '07 under Narron/Mackanin, 103.2 under Baker in '08.
Reply to Rob
markjuliusweinert
My real disagreement with Baker's management when he was with the Cubs was the batting order. He always put his up the middle "fast guys" at the top of the order, even when they had terrible OBPs and the catcher and "slow guys" at the bottom, even if they had high OBPs. The top 2 or 3 spots (which will get to most plate appearances) were a black hole.
Reply to markjuliusweinert
Llarry
Back in 2004, I was in Chicago for a few days, so I planned for a game at Wrigley. On a cold, rainy day, I watched Dusty send Carlos Zambrano back out for the 8th inning, with 90+ pitches, in a game the Cubs led 12-4. The man's original reputation was not undeserved. Fortunately, Z did not suffer adversely from the incident, and, as Rob points out, Dusty has gotten better over the years.
Reply to Llarry
Llarry
I probably told that story when the article was posted the first time, but I can't tell. I *still* have no access to my comment history. I checked Dusty's BP page, and there is no link to *either* posting of this article. I finally checked Rob's author page, and this appearence is there, but not the original. Grr.
Reply to Llarry
Brendan Doorhy
This excerpt is from a Barry Rozner column in the Daily Herald referring to an incident from 2003:

Forgive us, then, for remembering that Dusty The Arm Killer put Prior back into a game just moments after he landed on his shoulder following a collision with Marcus Giles on July 11, 2003.
Prior grabbed his shoulder after the tackle and stayed on the ground for a couple minutes, but good thing Baker only pitched him 2 2/3 more innings that day.
Immediately following that extra 66 pitches - during which he gave up 4 runs on 5 hits and 2 walks - Prior missed a month with a shoulder injury.
Reply to Brendan