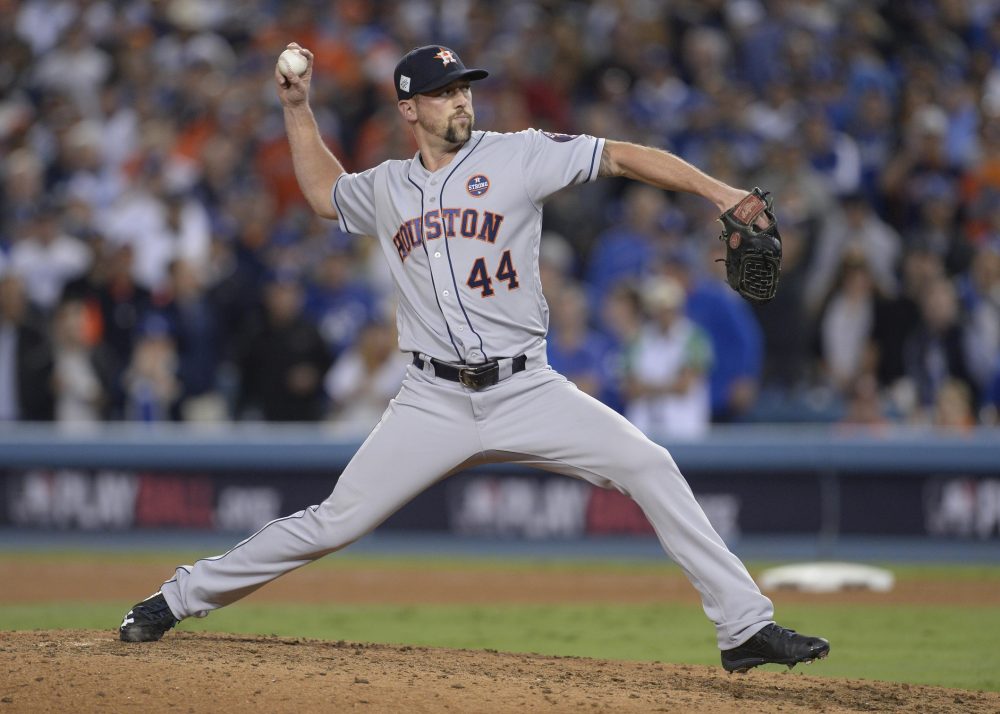 Sometimes, the source behind a pitcher’s struggles can remain a mystery. Other times, it’s so obvious that it feels too obvious. Gregerson’s uncharacteristic 2017 falls into the latter category, a season in which his ERA shot up to 4.57 because one of his biggest strengths collapsed into a major detriment. Prior to 2017, Gregerson was the proud owner of a tidy 0.65 HR/9. Last year, that mark nearly tripled to 1.92. Many of his rate statistics remained steady, but a falling ground-ball rate led to the skyrocketing home runs and, of course, that ugly 4.57 ERA.

Trying to discover the source of those home runs is key, because an uptick can be a random aberration or a sign of something worse to come. For Gregerson, it looks to be a combination of the two factors. The good news: the 33-year-old has an excellent track record when it comes to preventing home runs, and his ground-ball tendencies indicate that bad luck may be in play (Gregerson easily had the highest HR/9 mark of all relievers with a ground-ball rate above 50 percent).

On the other hand, both of Gregerson’s pitches took a step backward last season. For the third season in a row, his sinker lost sink (never a good sign). With it came another precipitous drop in ground-ball rate; the pitch induced worm-burners 70 percent of the time in 2015, but now that mark sits at just 57 percent. Gregerson’s usually excellent slider suffered as well. A pitch excellent when buried but ineffective when left high in the zone, he hung a slider nearly twice as often as he did in 2016, leading to a sharp increase in home runs.

There’s a good chance Gregerson better locates his slider in the future, but his troubles with the sinker are far more worrisome. He’s lost vertical movement on the pitch every year since 2013, and the future won’t be pretty if Gregerson can’t put a stop to his sinker’s sinking sink. Gregerson’s new team, the Cardinals, are betting their new righty can correct his issues. After losing Seung Hwan Oh, Zach Duke, and Juan Nicasio to free agency (and Trevor Rosenthal to Tommy John surgery), they’ll be counting on Gregerson to serve as a seventh- and eighth-inning staple over the next two seasons.

From April 1, 2015 through August 1, 2016, Rondon was one of the best relief pitchers in baseball. He had a 1.70 ERA, 27.6 percent strikeout rate, and 4.6 percent walk rate. His four-seam fastball/slider combination was working as well as ever, and the then-28-year-old was locked in as the Cubs’ closer. Then, everything changed. A little over a year later, Rondon was non-tendered by the Cubs (instead of paying him around $6 million in arbitration) and picked up by the Astros on a discount deal.

So, what happened? Well, it started with a right triceps strain that sidelined Rondon for much of August 2016. After missing two weeks in the initial disabled list stint, he returned and wasn’t the same. While Rondon was healthy for much of 2017 and continued striking batters out at an excellent rate, he was inconsistent over the course of the year. Rondon was bitten by the same home run bug that ruined the end of his 2016 season, and his normally great control deteriorated. Despite stretches of dominance, the Cubs couldn’t count on Rondon for much of the season and demoted him to a lower-leverage role.

The source of Rondon’s fall from grace is fairly easy to trace, but it’s much harder to determine whether the problem can be fixed. Let’s start simple: Rondon’s trademark slider, against which batters slugged just .133 and .196 in 2014 and 2015, respectively, lost its bite. The pitch was as good as ever in 2016 prior to his triceps injury, but got utterly destroyed to the tune of an .820 slugging percentage once he returned in 2016. Last season, the pitch was merely average, a far cry from its previous dominance.

Rondon’s slider has lost some movement since the injury, but the main culprit may be spin rate. Higher spin rates on sliders have been shown to be negatively correlated with BABIP, GB%, and SwStr%, and Rondon’s injury may have altered how much spin he puts on the pitch. Rondon may have also lost some ability to command the slider—his walk rate more than doubled from 4.0 percent in 2016 to 8.4 percent last season, and a decreased ability to move his primary breaker around the strike zone could be a major part of that.

Are those two issues correctable? It’s hard to tell, but if Rondon can resurrect his slider, all of the other pieces are still there for him to be a high-end reliever. The righty is just 29 years old, so it’s hard to believe his slider permanently vanished following that triceps strain. The Cubs may regret letting Rondon go over $6 million, and he could be a bargain over the next two seasons for the Astros.

Back in 2005, Martin was drafted in the 21st round by the Rockies. He was dealing with a shoulder issue from college, and went to work rehabbing the injury. Devastatingly, the 6-foot-8 hurler’s shoulder failed to improved; he was out of baseball by 2008, never throwing a pitch in professional ball. In 2010, while working at a warehouse in Arlington, Martin’s high school friend and then-boss brought a catcher’s mitt to work and had Martin throw a few pitches. His pitches “nearly took [the boss’] thumb off,” and Martin’s shoulder was pain-free.

He joined a men’s league, and soon was dominating an independent league team with a 95 mph fastball. The then-25-year-old signed with the Red Sox, was later traded back to the Rockies, and made his big-league debut for Colorado at age 28. The next season, the Yankees traded for Martin and he made their Opening Day roster. Martin lasted 20 2/3 innings, carrying a 5.66 ERA with a mediocre strikeout rate before having his rights sold to the Nippon Ham Fighters.

Martin, now entering his age-32 season, spent the last two seasons as one of Japan’s best relievers. He allowed just 11 earned runs in 88 1/3 innings, issuing fewer than 1.5 walks per nine innings, with a solid strikeout rate. The righty never gave up on his dream, even after his “second chance” had seemingly ended. Now he returns to Arlington with the Rangers on a contract that guarantees him $4 million. He’s climbed in an incredible hill and beat impossible odds, and is now back in the show. No matter Martin’s performance next season, his baseball career has been a success.

But, sure, let’s talk about that performance. A teammate of Shohei Ohtani in Japan, Martin has been dominant with his fastball, cutter, and slider combination. Yes, Japan isn’t MLB, but it’s far closer than most give it credit for. While the range of outcomes for Martin is admittedly wide, relievers are coming at a premium these days and the Rangers can do far worse than offering $4 million to Martin. He’ll slot in at the bottom of the Rangers’ relief hierarchy initially, but could quickly climb the ranks.

Each day, on his commute to Safeco Field, Jerry Dipoto drives his car and presumably repeats the same phrase over and over: “One team’s trash is another team’s treasure.” Those are words he lives by, works by, and, of course, trades by. Dipoto’s never shown a hesitance when it comes to slinging deals for players not highly valued by their current teams, acquiring players for pennies on the dollar and hoping they can break out in Seattle. Dipoto’s latest treasure is Armstrong, a reliever castoff from the ultra-deep Indians who has been lights out in the minors but ineffective in limited big-league time.

With no minor-league options left and a lack of space in the bullpen, the Indians flipped Armstrong to the Mariners for some spare international pool money that had previously been collected for the Shohei Ohtani sweepstakes. There are generally two types of relief pitchers who dominate in the minor leagues but can’t take the next step. The first is the electric arm who just can’t seem to command his stuff enough to make it work at the highest level. The second is the finesse pitcher who doesn’t blow any hitters away, but has enough experience and pitchability to put away bats. Armstrong is an interesting combination of the two.

He strikes out more hitters than his raw stuff would suggest, but still has a pair of big league-quality pitches in his fastball and curveball … which he, of course, struggles to control. The stuff and performance suggest that Armstrong can make it work as a solid middle reliever. Next spring will be big for the new Mariner, as he’ll be competing against a number of fringe arms like himself for a spot on the Opening Day roster. The odds of him being more than a mediocre middle reliever are low, but, hey, for $500,000 of international bonus money, it’s worth a shot.