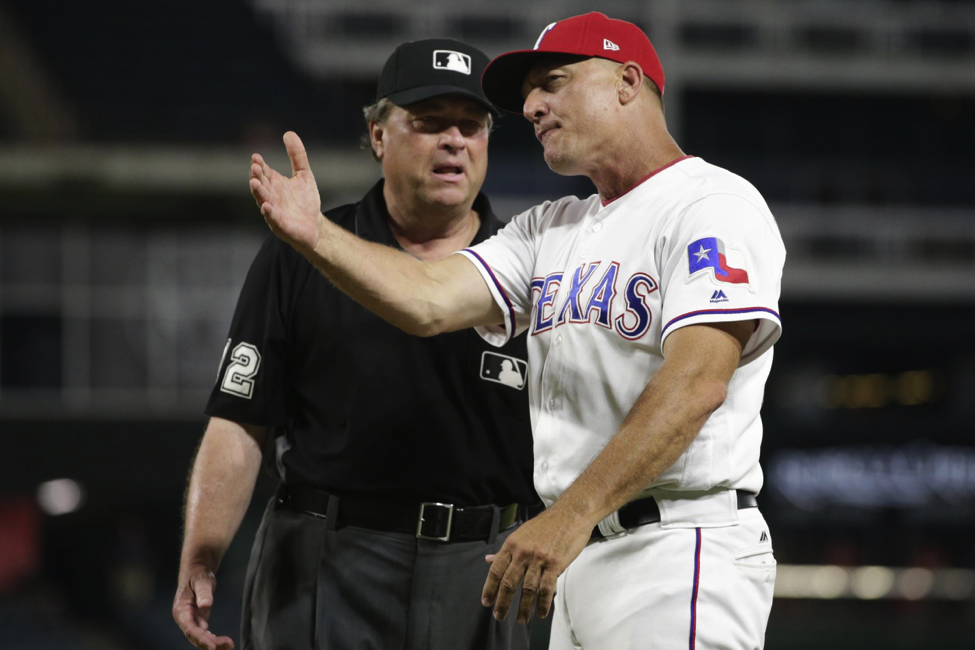 One of the beautiful things about baseball, particularly at a point in the year when we have so little, is how many layers it provides. Sure, you can care about winning games, and how your team of choice wants to construct and optimize its roster to go about collecting its precious victories. You may even subscribe to a baseball analysis website to better learn how these victories are accrued. But interspersed into the direct competition of the sport are other factors. There are the aesthetic considerations, the elements of baseball’s style: Puig’s bat flips, Syndergaard’s tresses, Aoki’s routes. There are the extracurricular concerns, the business and the branding and the creation of stardom. Amidst it all, directly in our view on every pitch, there is one more element: the law.

And if there’s one commonality to all of these features of baseball, it’s that you can bet on them. One of my favorite recent discoveries is the UEFL, or Umpire Ejection Fantasy League, where participants predict and dissect every ejection over the course of a year. The comment sections are filled with professional and semi-professional umpires who don’t just complain about right or wrong calls the way most fans would (though it does happen); they also dissect each situation from an umpiring perspective, how the situation was handled or mishandled. It’s like listening in on old substitute teachers talking shop, except on a subject you passionately care about.

The primary focus of the UEFL is naturally the ejections. Baseball saw 187 dismissals between Opening Day and the last out of the World Series—104 of managers and bench staff, and 83 players. It stored video of each ejection, documented the game state, the cause, and the whether the call in dispute was correct, incorrect, or a matter of the umpire’s discretion. It is a wealth of data. Employing these figures, we can analyze non-predictive data about how human beings are forced to stop playing baseball. Click on each thumbnail shown below for a larger image, because the data is fun to look at if not particularly pertinent:

Which teams saw the most and least ejections?

How many player ejections occurred in each inning?

What was the event that led to the ejection?

Was that call, the trigger, made correctly or incorrectly?

That last one is a little more important, because it’s a bit of a surprise: given how many blown calls fans see (or think they see), watching baseball day in and day out, the majority of conflicts arise in situations where the player is in the wrong. Often, the flames are fanned not because of the umpire’s output but because of tension with the other team, a brushback or harsh words. This is where the umpire’s true skill, one that could never be replicated by the robots in waiting, becomes key: classroom management. Though their work descriptions don’t overlap much, there are times when an ump has to act like a middle school teacher.

As anyone who’s been handed a room full of 13-year-olds knows, imparting wisdom may be the desired outcome, but before that, a different transaction has to take place: the acquisition of control. Today’s umpires are the recipients of 150 years of battling with players over their authority, and there are situations where control has to be seized, if not for the moment itself, than for the next one, whenever it arrives. That’s why there are certain triggers that are automatic dismissals: the magic word, physical contact, the slamming of the bat on home plate.

The edge between emotion and conduct makes for a fascinating horizon, at times. Nick Franklin got ejected from a game for yelling at the umpire that the other team had used more than 30 seconds to make a challenge … on a play where they didn’t make a challenge. Chase Utley was thrown out by the second base umpire for repeatedly standing in his way and blocking his view. Peter Moylan got roughed up and then was ejected from the game after he’d already been replaced, as he was leaving the mound. And, of course, there was Adrian Beltre’s masterwork of open rebellion.

Sometimes, a manager is begging to get the hook, Earl Weaver-style, to fire up a morose band. Other times, the umpire’s need for control can go too far:

One of the most beneficial qualities of the substitute teacher is invisibility. The student is in his or her own environment, shuttled from classroom to classroom by the current of routine. The one thing you cannot do, for your own sanity, is draw attention to yourself. Substitute teaching is manipulation through quiet charisma; your goal is to get the students learning, doing what they’re supposed to be doing, without making them think too much about why they’re doing what they’re supposed to be doing. Once you’re in their head, once they realize that you’re the trespasser, the result is almost always conflict and ruin.

Despite the popularization of the phrase “ump show,” the vast majority of umpires want anything but that; they’re there to work, and like substitute teachers, they just want to do a decent job and get home on time. Ejections for both are nuclear options, a sign that they’ve been beaten, been put on tilt. There was a time when umpiring was the worst job in baseball, when the crew would have to flee in darkness from an irate home crowd. Things are better now, or at least not so dangerously human, but the best umpire remains the forgettable one: the one who controlled the game without looking like they controlled it.

With that in mind, I’ve taken a moment to calculate the situations where umpires, with a swing of one finger, had the greatest impact on a game. Leaving aside the managers, the 83 players found a variety of ways to grind their axes, but balls and strikes were clearly the favored subject of debate. Ejections stemming from fights include those in the HBP and no play category, depending on whether they were active catalysts or first responders. I looked at this from two viewpoints: at the moment, in terms of the talent of the player ejected compared to his replacement, and in retrospect, comparing the win percentage of the substitute to the expected contribution of the ejectee.

I calculated them each as follows:

The following are 2017’s five most game-changing ejections, at the moment of ejection:

One of the pleasant things about baseball is that ejections don’t really impact a game that much. The Marlins lost one of their best players in the first inning, replaced him with a 44-year-old man, and the subtraction in WARP was a mere 1.5 percent of a game. There are other elements impossible to count here, of course: the decreased flexibility of the Marlins’ bench on one side, the psychological effects of the ejection, so often tested by managers, on the other. But it’s nice to know that as egregious as the ump show can appear, especially when it’s targeted against your team, the damage is relatively small.

(At least, as long as it’s a hitter. Pitchers are harder to calculate—it’s far more difficult to estimate how much potential starter value is lost when they’re ejected—so it’s rather fortunate, from an authorial standpoint, that only one starter was ejected from a close game in 2017, and that starter was a mid-meltdown Kevin Gausman.)

He doesn’t show up, but one team actually benefited, talent-wise, from an ejection: the Tigers, who were forced to go to the surprisingly decent John Hicks after James McCann was ejected arguing on behalf of his own framing abilities.

And here are 10 of the most dramatic swings in actual results:

Take as many grains as salt as necessary to choke down a stat like xWPA, which assumes that the ejected player was due to have the most average game of his life. But what we can take away from this is that when Kevin Pillar got booted for arguing a strike call, his replacements managed to add -20 percent win probability in three at-bats. That’s the most damage an umpire did, in retrospect, by giving a player the hook.

That sin is redeemed by the opportunity umpire D.J. Reyburn gave to Chris Herrmann, who walked and singled in two plate appearances as the Diamondbacks fell just short in their comeback.

There isn’t really a takeaway from this, no predictive value to be wrought. All the world hates an umpire, and will continue doing so long after circuitry has replaced flesh. But perhaps this is a suitable moment to appreciate the poor maligned adjudicator, who has to work in extreme temperatures, get hit by switched-up fastballs and errant bats, gets taunted by crowds and reviewed on their performance in slow motion, and who still get it right almost every time.

Umpiring, like substitute teaching, is thankless, anonymous labor, and it’s performed by real people who lose their temper, often after being screamed at by young men who have already lost their temper first. And as it turns out, the thing we hate them for most, getting their fingerprints on our pure athletic contest, almost never happens anyway.