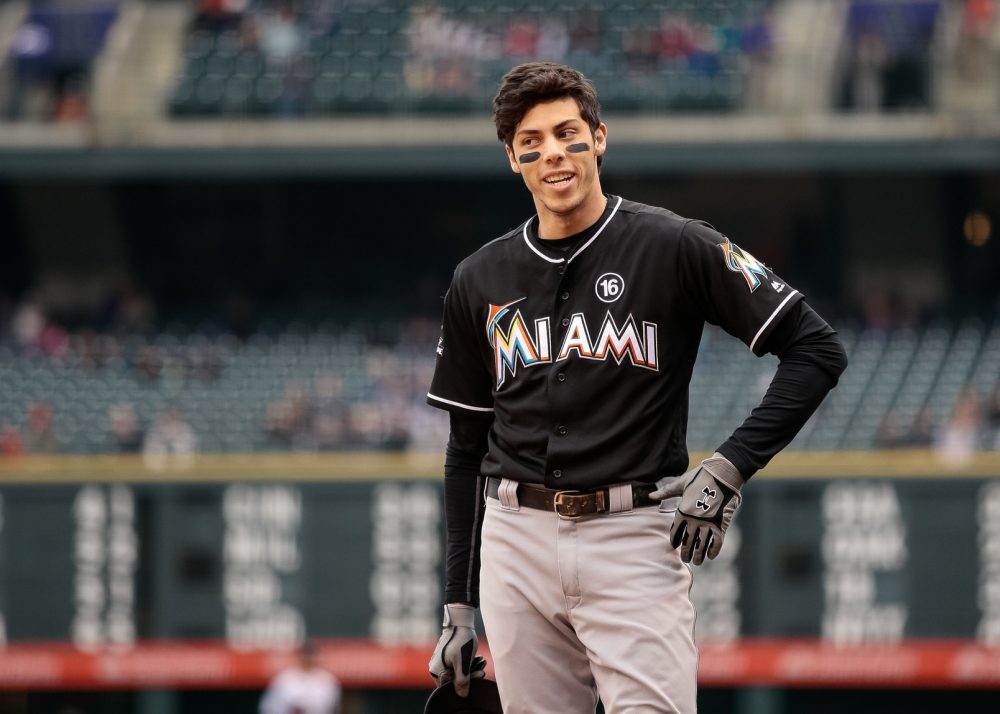 The Great Marlins Fire Sale of 2017-2018 is continuing after the Cardinals managed to take Marcell Ozuna off Miami’s hands. It’s also not over yet, as the Marlins are still trying to decide whether to trade Christian Yelich away as well. Yesterday, the early indications were that the Marlins wanted to hang onto Yelich. On the other hand, according to a report from Jon Heyman, it appears that if Yelich wants to leave Miami then they’ll try to make this trade happen. If this tweet from Yelich on December 9 is any indication, it won’t be too much of a leap to assume that he wants out.

If the Marlins do decide to acquiesce to Yelich potentially requesting a trade, they won’t have to look far for suitors. They already have two division rivals interested in acquiring him, as there have been rumors that the Braves and Phillies like the 26-year-old outfielder. Yelich would immediately upgrade either of those outfields and also serve to jump-start their respective rebuilds. In addition to the rebuilding teams, Heyman also noted that contenders like the Diamondbacks and the Dodgers are looking to bring Yelich into the fold.

You should expect any team that wants to acquire Yelich to pay a hefty price in terms of prospects. Jeff Passan of Yahoo! Sports noted that the price for Yelich could be higher than what the Marlins got for Ozuna. While it appeared that the primary goal in the Giancarlo Stanton trade was just to get his contract off their books, the Marlins may actually have their eyes on the future on-field product with the Ozuna trade and any potential trade of Yelich.

The Orioles have been listening to offers for Manny Machado in an effort to wait for the right deal to come around. The usual suspects in the form of the Cardinals, Phillies, Rangers, and Yankees were reported as potential suitors for Baltimore’s star third baseman, but another team has emerged as a contender and it’s honestly a bit of a shock.

Ken Rosenthal of The Athletic was the first to report that the White Sox were planning to make a serious run at acquiring Machado. As if it weren’t shocking enough to see a team that is solidly in rebuilding mode trying to acquire a star, Rosenthal also noted that if Chicago did indeed acquire Machado but failed to lock him up to a long-term deal, they would then look to flip him to another team in the relatively near future for even more prospects.

This would be an aggressive way to go about rebuilding if the White Sox are indeed serious about trying to bring in Machado. This could end with the White Sox pulling off a coup and landing one of the game’s best infielders and signing him to a long-term deal, or they could use him to recoup whatever it cost them in prospects to acquire him in the first place. Either way, it’s a bold strategy on Chicago’s part and we’ll see if it pays off for them.

Chase Headley returned to the Padres earlier this week in an apparent salary dump on the part of the Yankees. With that being said, it doesn’t seem like we’re going to be seeing Headley don the Padre blue again, since rumor has it that San Diego is trying hard to trade him and there are no plans to keep him for long.

Buster Olney of ESPN pointed out that the Padres are actively trying to trade him and Bob Nightengale of USA Today added to that rumor by pointing out that the Angels have shown interest. While Headley’s bat would play in the Padres’ lineup, they’d probably prefer whatever benefit they could get from trading him and they may already have all of the benefits that they wanted after getting Bryan Mitchell from the Yankees.