A Boy And His Schwarb

Kyle Schwarber is on a “mission to transform his body” https://t.co/MLiyeu8XD5

The NES game A Boy And His Blob has fourteen different flavored jelly beans that transform the titular sidekick into various useful items to navigate an underground subway and later an interplanetary world. Without a doubt Kyle Schwarber can heed this advice to transform into numerous different bodies to help the team.

Licorice = Ladder. Can finally start robbin’ some home runs.
Strawberry = Bridge. Can get a tremendous lead off the base without leaving the bag.
Coconut = Coconut. In the game, the Boy can roll him into dangerous territory so that he doesn’t get accidentally fragged. Are you thinking what thinking? You are if you know there’s no rules against using a coconut to steal signs.
Cola = Bubble. So that teammates can go inside him when they’re feeling sad. Everyone needs this.
Cinnamon = Blowtorch. The ivy just isn’t necessary.
Apple = Jack. He can hit home runs, but he can turn into a Jack just in case he wants to hit a home run in the 1990s.
Lime = Key. There is absolutely no reason to turn into a key in baseball. There are no locks on the doors. Everything has latches. Keys To The Game Are actually just trite words of wisdom. He won’t need to use this one.
Vanilla = Umbrella. Sometimes you win and sometimes you lose, but sometimes it rains.
Tangerine = Trampoline.

Root Beer = Rocket. This one’s for all the exit velocity wonks out there.
Honey = Hummingbird. This is just the most efficient way to lose weight.
Ketchup = Wall. Turning into a piece of brick wall close to the infield is a great way to carom the ball back into the outfield without having to throw.
Punch = Hole. Finally, we have the pit.
Orange = Vitablaster. This is a gun that shoots vitamins and absolutely not steroids. It says so right on the box. Okay, they probably aren’t steroids. But they do taste great.

The Johan Santana Hall of Fame

On August 19th, 2007, the Texas Rangers faced the Minnesota Twins at the Hubert H. Humphrey Metrodome. The Twins were a team hovering around .500, the Rangers a little below that. Two mediocre teams performed a Sunday afternoon game in a giant air-conditioned room. The game lasted barely over two hours, and that was because of Johan Santana.

Johan Santana was hands-down the best pitcher on the 2007 Minnesota Twins. Stuck laboring in a rotation with the likes of Scott Baker, a young Matt Garza, and some dude named Boof, Santana was the one shining touchpoint on an otherwise dim pitching staff (Joe Nathan notwithstanding). 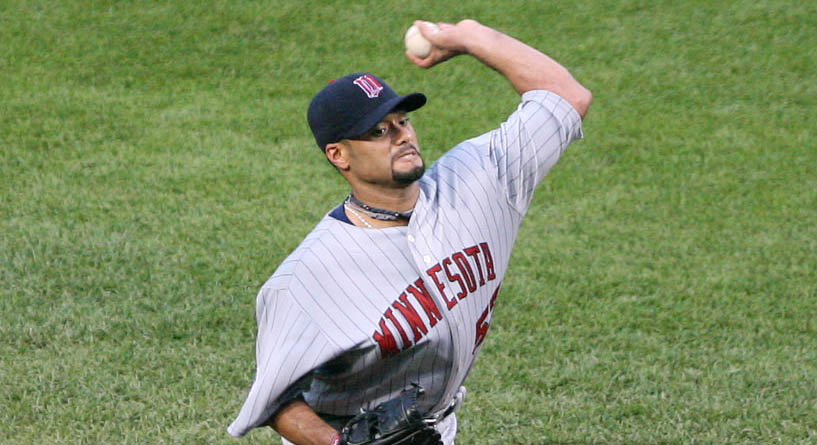 And on August 19th, 2007, Johan Santana took his magic left arm to the mound and absolutely mowed down the Texas Rangers. Sammy Sosa was the only Ranger to get a hit that day, and he inexplicably ended up with two. Santana pitched eight innings, faced 26 batters, and struck out 17 of them in 112 pitches (83 strikes).

But, as is so often the case, the boxscore doesn’t tell the whole story. Or maybe it does, I don’t know. But I do know that I was in attendance for this particular game — lower level, right by the left field foul pole. And I don’t think I’ve ever encountered anything like that since. I’ve certainly had many memorable baseball moments in my life — my favorite team just won the dang World Series a month ago — but I don’t think I’ve ever been witness to such a dominant sports performance, at least in person. It was the perfect match of a lights-out pitcher against a pretty mediocre team that really left me in awe and wonder.

Johan Santana will be on the Hall of Fame ballot for the first time this year. Should he have had a longer career, he might have been given a shot. As it stands, he’s not getting in, and he’ll probably not have enough votes to even stay on the ballot. And I’m not going to say that he should be in the Hall of Fame, but he’s damn sure in my Hall of Fame.

In a time when everything seems so divisive — where we are apparently incapable of finding middle ground — the Hall of Fame serves as yet another reminder of our binary society. Something either is or it isn’t. I don’t want to be the arbiter of who gets in the Hall of Fame. In times like this, I think everyone should. Because everyone brought something — some story or statistical quirk or good-hearted deed — that deserves recognition. Build me a Hall of Fame that’s 500 acres across. We should all have a place for our Johan Santana stories. They can keep their old one, but — at least for now — I think it’s high time that we start being exceedingly inclusive. At least on this one, small, dumb thing. Maybe that’s too much, maybe it’s not enough. But I’d just like to have one thing we don’t argue about for just a bit. Join me. There are lots of cool memories over here.

Cashman said that Ohtani’s reps told him they were very impressed with team’s presentation, but no matter how good it was, the Yankees couldn’t make themselves West Coast or a smaller market.

He periodically lowered his newspaper to glance furtively at the lobby’s entrance, peering over the top of his fake tortoise shell glasses, as spies always do in movies. He wasn’t a spy, of course–he was largely against killing people and interrogation had never been his forte–but he was waiting for someone, or rather someones. Indeed, he had spent nearly two thousand sleepless nights waiting. Well, not waiting–-doing, so he could wait now.

He had never been particularly good at facing rejection, but even worse was not having control. And so he built the life of a control freak, believing he could persuade anyone to do anything, and he was right, most times. But then Shohei Ohtani made his decision, and he was rejected before he was even considered, and there was nothing he could do about it. He couldn’t turn the Yankees into, say, the Dodgers, no matter how hard he tried.

Unless he could. Unless he was able to go back in time, stop the Dodgers from moving to Los Angeles, and move the Yankees there instead.

And so he found himself sitting in the lobby of the Palmer House Hotel in downtown Chicago on May 26th, 1957. The vote to move the Dodgers to LA would take place in two days, and it was his mission to stop it. The plan was fairly straightforward: discuss the potential financial ruin and threaten Walter O’Malley with Cincinnati’s potential move to New York. He had run through the plan a thousand times and was sure it would succeed.

But as soon as the eight impeccably dressed owners swaggered through the lobby door, he panicked, shrinking behind his newspaper as his brain waged war on itself. Why did you think this would be a good idea?! They’ll never listen to you. No, keep it together! You’ve practiced this. You know what you’re doing. You’re the GM of the New York Yankees; you face more pressure than this every single week.

Inhaling and exhaling slowly, he rose from his chair, neatly folded his newspaper and tucked it under his arm, then confidently strode toward the group. But the closer he got, the more he began to panic, and by the time he stood in front of them his plan was scattered into incoherent fragments. Knowing he needed to act, he blurted out the first phrase his scrambled brain sent to his mouth: “watch out for the Reds!”

Aghast, he half-jogged out of the building, needing to get as far away from the owners as possible so he could begin to regroup. He instead found himself in front of two terrifyingly professional-looking men in trenchcoats, the closer of whom menacingly whispered at him, “follow us.” Sensing that noncompliance was not an option, he followed the pair down the street and into a car.

They silently rode through the streets of Chicago until the car stopped outside a plain brick building. Quickly, he was pulled from the car and escorted through the hallways into a darkly lit office in the basement.

“So, Mr….” began the same man who had spoken earlier, as the other lurked behind his chair.
“C-cashman,” he stammered, as his brain screamed at him to give a fake name.
“Mr. Cashman,” the man continued forcefully, “tell us all you know about the ‘reds’.”

He first tried to explain he meant the baseball team (Nobody calls them that anymore, spat the talker) and then contested that he knew nothing about anything. But the pair questioned him relentlessly, drawing from him truths formerly unknown (New York bagels aren’t that great!), each of which deepened their suspicion of this peculiar man.

Finally, once they had reduced Cashman to an incoherent mess and extracted from him all pertinent information about Chicago communists, the pair deposited him back in front of the hotel. On autopilot, he returned to the lobby chair, unfolded his newspaper, and waited for the owners to return, unaware that the date at the top of each page now read May 29, 1957.