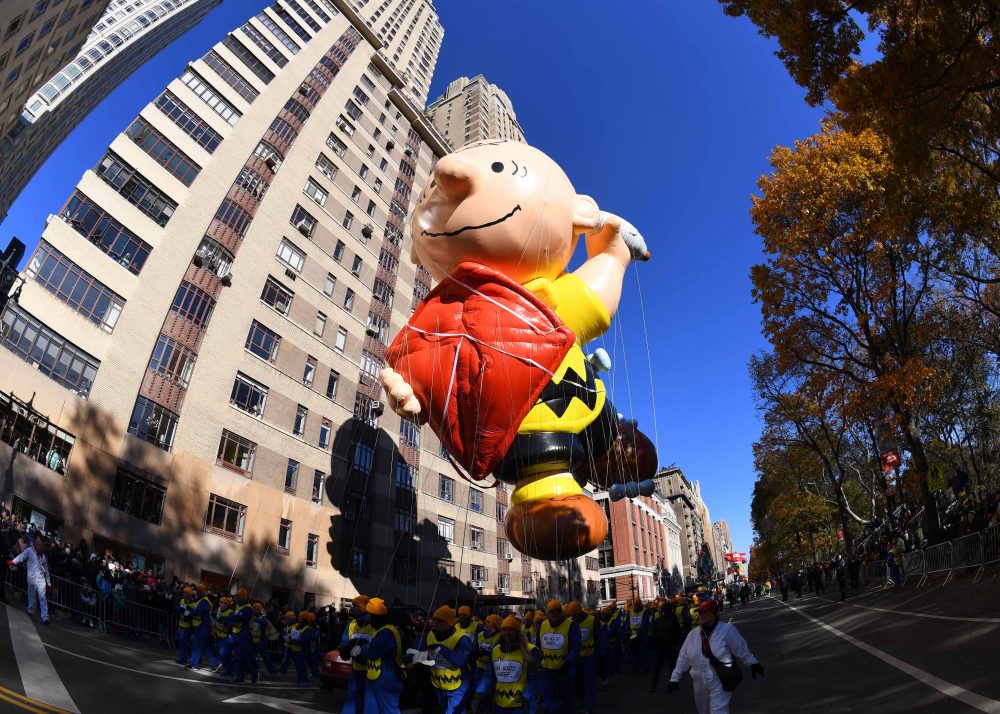 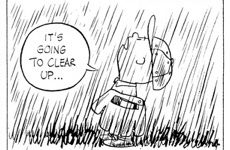 On Sunday, April 11, 1954, Charlie Brown was supposed to play a baseball game. As many Sundays in April have been throughout history, though, it was raining. It was raining, in fact, quite hard.

At this point, Charlie Brown had been the player-manager of his baseball team for one full season, and they had yet to win (if memory serves) a single game. It is no wonder, then, that his teammates—even the relatively enthusiastic Snoopy—bailed so quickly. Even a team that had something to play for, a better team, a major-league team, even, would likely be loath to play in such conditions.

But Charlie Brown stands there, cap still on head, hand still firmly embedded in his oversized mitt. Why? Because it was going to clear up.

“It’s going to clear up…” Charlie Brown says. Uncertain, at first, as he stands alone appraising the sky—as if he needs to convince even himself.  Then emphatic, exclamation-pointed, a command to his faithless teammates. And, finally, again, uncertain, as his teammates fade into the distance, as the angry black brushstrokes of rain get thicker and denser, as the water begins to swirl in dark rivers around him, threatening to sweep him away entirely. “It’s going to clear up…”

That’s the joke, of course. It is evident to Lucy and Linus and Violet and Snoopy and Schroeder and Patty (not Peppermint) and hell, even to Shermy—who was so much of a cosmic blah that he didn’t appear in Peanuts after 1969—that it is not, in fact, going to clear up. Charlie Brown loves baseball so deeply, needs it so desperately, that he has become delusional. He is standing in a torrential downpour, completely alone and enveloped in darkness, waiting for a game that is never going to happen. A game he would almost certainly have lost anyway.

But as much as the joke is that Charlie Brown is wrong, that it’s not going to clear up, the joke is also that he’s right. There has never been a rainstorm that has lasted forever. Even Noah’s flood had a time limit. And while Charlie Brown never got to play that game on April 11, 1954, he played baseball again the very next Sunday. He played baseball again after the rain in 1955. He kept playing baseball for 46 years—a career, though it existed almost exclusively in the L column, whose longevity anyone could admire. Charlie Brown might have been “out of his mind” to stay there on that rainy Sunday. But he knew the truth, too. He needed to. That’s how he kept going. 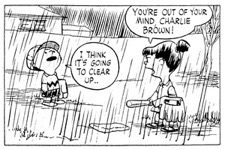 The Bobblehead Who Wasn’t There (Yet) 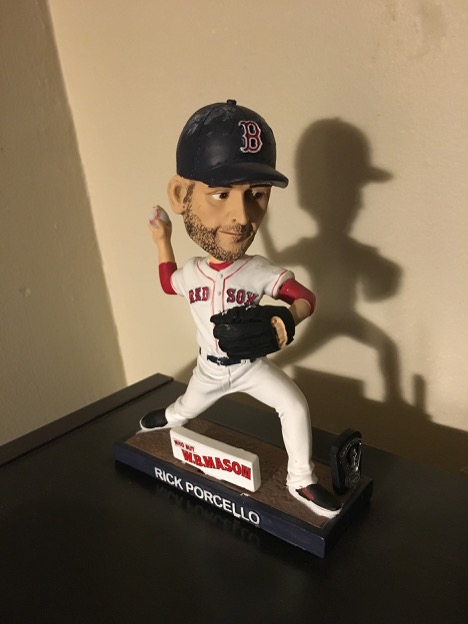 I own a 2016 Rick Porcello Cy Young bobblehead. I’m looking at it right now. There’s a scuff on his hat, probably dating to the packaging process; my roommates have the same bobblehead, but none of them appear scuffed in the same place. This could be construed as “character,” but let’s not come to a conclusion we’ll regret. This bobblehead, commemorating Porcello’s improbable 2016 campaign, has no character. It’s not yet interesting.

There’s a reasonable facsimile of Porcello’s mole sitting just above his left eyebrow, perhaps Porcello’s only physical feature worth noting. If you’d have asked me to pick out Porcello in a lineup of MLB players prior to 2016, I would have failed. The maker crafted a pointy resin nose, an almost-beard that seems to be a contractual requirement for Red Sox pitchers, and a wide, striding pose. All considered, a respectable interpretation, a fine specimen of the beloved medium.

Baseball fans fetishize collectibles more than most other cultures. Cheap wax cards, cheap resin statues, cheap bucket hats with corporate logos: Many achieve some semblance of cult status, heirloom status, oddity status. I imagine this is the product of baseball’s coming of age with consumer capitalism, and it dovetails with the self-proclaimed “golden era” of the game. The first bobbleheads, and the first mass-produced baseball cards, arrived in the 1950s, not coincidentally with the post-war surge in consumption, consumption, consumption.

But this Rick Porcello bobblehead, it’s not yet interesting. It’s not weird enough, not funny enough, not controversial or provocative enough. Less than a year removed from its production, it hasn’t yet had the opportunity to evoke the sort of sharp recollection that a Zoilo Versalles 1965 AL MVP bobblehead might evoke. Nothing in its corporeality is unique, save the almost imperceptible mole. One could nearly strip Porcello’s name and slap on “Mark Whiteguy,” but that mole, that Cy Young plaque conspicuously placed at the pitcher’s feet—they prevent such brazen facelessness. In a few years, when Porcello’s award-winning season is a more distant memory, it might accrue some cultural significance.

Until then, I own a 2016 Rick Porcello Cy Young bobblehead. It gathers dust on my bookshelf, as does its twin on our living room bookshelf.

“[Giancarlo Stanton] is arguably the best player in the game,” Jeter said. “He had one of the greatest seasons I’ve seen a player have in the last 20-plus years.”

By fWAR, which I’m using for this exercise because it’s the easiest flavor of WAR for me to get build multi-year ranking, but which probably underrates his defense, Stanton is tied for the 136th-greatest season of the last 20-plus years, where “20-plus” is defined to mean “from 1996 to present” because 1996 was Jeter’s rookie year and because the 1994­–95 strike forms what I believe to be a natural dividing line between the previous era and the current era of baseball.

By that standard, then, the following are some other things Derek Jeter also believes:

You might call these terrible analogies. You might say that they’re not even close to capturing what Jeter is getting at, that they attempt to bring him in for mockery when he said an entirely routine thing for a baseball executive talking about a player who plays for that executive’s team, in particular one he’s trying to trade. You might say, “Have you even heard all the ridiculous stuff Scott Boras says?” You might be right about all of this, and yet you’re still wrong in the big picture, still wrong about the issues that actually matter, because the simple fact, the issue that underlies everything we’re doing here, is that Derek Jeter is a scourge, and my I have decided to speak for all of Short Relief, authorized to do so, or not, and declare ourselves dedicated to driving him from baseball via mockery and disdain on this very website. Keep it locked here for the next brutal takedown.

You need to be logged in to comment. Login or Subscribe
deadheadbrewer
If Jeter were a GOOD baseball talent evaluator, then he would have begged out of most of his farewell season, and the Yankees just might have made the playoffs that year. (not that anyone outside of the Big Apple wanted that) Jeter and his manager decided that having Jeter bask in fan adoration every day was preferable to winning games. Hopefully Jeter will hire some people who CAN evaluate baseball talent.
Reply to deadheadbrewer
Kristoffer Ericson
Jason, what if you limit your search to seasons that Jeter *literally* has seen? I.E., teammates and you could probably say division-mates. This assumes he "saw" Giancarlo a lot this season, yes, but I'm very curious if that restriction gets him closer to top-20.
Reply to Kristoffer