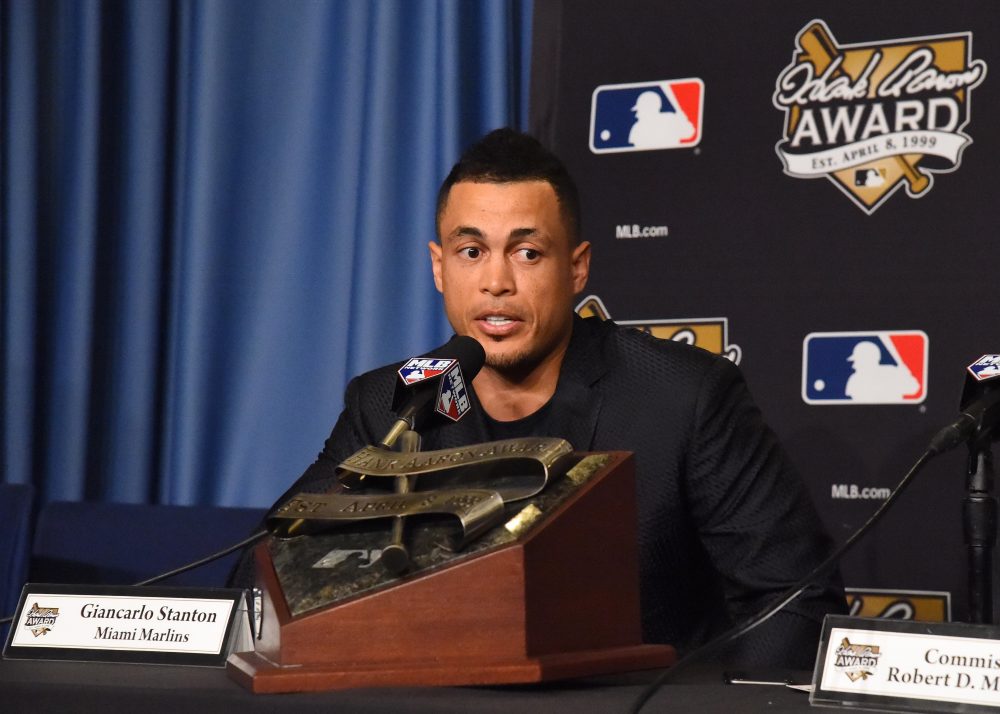 The Giancarlo Stanton trade saga has moved at the pace of an eephus pitch so far, but we’re starting to see a little bit of action on the horizon as one of the handful of teams that have previously been reported as contenders to acquire Stanton emerged as a clear favorite. According to Craig Mish of SiriusXM, the Giants have apparently made it known to the Marlins that they are willing to take on the entirety of Stanton’s expensive contract in any potential trade.

This is a big deal, since the Marlins’ apparent goal in trading Stanton (and other potential trade chips like Christian Yelich and Marcell Ozuna) is to shed payroll. It’s one thing to get some of Stanton’s money off the books, but getting a trade partner to take on the whole $295 million remaining (if Stanton decides not to opt out before the end of the deal) is a much taller task.

It makes sense that the Giants would become the favorite in the Stanton sweepstakes if this report is indeed true. Earlier this month, Mish also pointed out that the Giants were discussing trading players like Joe Panik and Tyler Beede as part of a deal with the Marlins. If those players were included in any formal talks and the Giants are also willing to take on Stanton’s entire contract, there’s a very good chance that we could see Stanton wearing black and orange in 2018.

If the Giants fail in their pursuit of Stanton, then they have come up with an interesting backup plan. According to Jon Morosi of MLB.com, the Giants have been talking to the Pirates about Andrew McCutchen and are “remaining in contact” with Pittsburgh in case the trade talks with the Marlins fall apart.

This is another rumor that makes sense for the Giants. If they don’t get Stanton, then it’s absolutely sensible that they would try to get McCutchen instead. While it could be considered a disappointment to come up short in acquiring the National League’s reigning MVP and the immense power threat that Stanton poses, having a player of McCutchen’s caliber on a short-term basis would serve as a decent backup option for a team that’s trying to recover from a disastrous 2017 campaign.

The Red Sox have also been rumored as a player in the Stanton sweepstakes and it makes sense when you consider the abject lack of power hitting that they had in 2017. Despite winning the AL East, the Red Sox had less-than-ideal numbers in home runs, slugging percentage, and OPS, and their Isolated Power was .149. That was good for dead last in the American League last season.

You have to imagine that Boston is going to do their best to address that issue during the offseason and it looks like they may be going back to the black-and-white well in Chicago where they got Chris Sale from. According to Jon Heyman, the Red Sox have been talking with the White Sox about a potential trade for Jose Abreu. With Mitch Moreland currently testing the waters of free agency, the Red Sox need a replacement at first base and Abreu would surely serve as a tonic for Boston’s power hitting woes.

Abreu has been good for hitting around 30 home runs since he arrived to the big leagues in 2014, and he had a .248 ISO to go with the 33 home runs and .295 TAv in 2017. He wouldn’t quite transform Boston’s offense into a Murderer’s Row by himself, but Abreu would serve as a surefire upgrade. Meanwhile, this could also serve as another big return for the White Sox for one of their star players as they continue to load up their farm system with tons of minor-league talent.

You need to be logged in to comment. Login or Subscribe
Kristoffer Ericson
At this point, I'm resigned to the fact of Stanton being gone, so while the franchise could use some actual real prospects in return, I'm OK with it being mostly a dump in salary. At least they can start over ... again ... maybe. Sigh.
Reply to Kristoffer