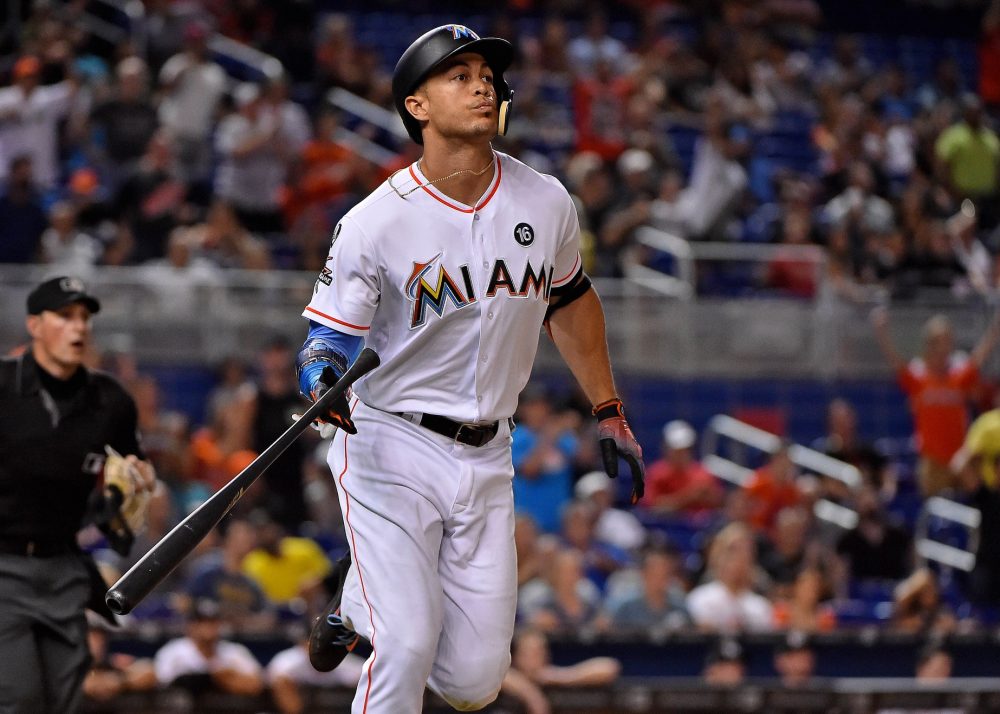 The Dodgers have been the biggest spenders in baseball for half a decade now. The transition from Frank McCourt’s stewardship to that of the Guggenheim group was sudden, and almost violent. The mega-trade that brought Adrian Gonzalez (and Carl Crawford and Josh Beckett and Nick Punto) to Los Angeles in August 2012 announced a new era of Dodgers baseball that bore zero resemblance to the previous one. Ever since, there’s been no dollar the team would not spend in the service of establishing an NL West dynasty. It’s worked, too. They’ve won five straight division titles, and four playoff series. They’ve even poured unprecedented amounts into scouting and player development, and it’s paid off in huge ways.

If they stay on the sidelines of the Giancarlo Stanton trade sweepstakes, though, I’m compelled to wonder what that was all for. Reportedly, the team is hesitant to take on Stanton’s massive contractual obligation, which comes to nearly $300 million over the next decade, and they’ve therefore let the Giants, Cardinals, and Red Sox emerge as the apparent major bidders for Stanton—whom the Marlins are (inexplicably, except that they’re the Marlins) desperate to trade this winter.

The new CBA plays a role in that: the penalties therein for repeatedly exceeding the competitive balance tax threshold for payroll are more stringent than ever. Maybe more to the point, there are (for the first time) extra penalties on teams that exceed the threshold by a certain amount, not only in the form of progressive tax rates but through the manipulation of draft picks. This rule set discourages teams from doing exactly what the Dodgers have spent the last half-decade doing, and it seems that the Dodgers are listening to the message their fellow owners are sending.

Still, it’s hard to reconcile this newfound fiscal discipline with the deeper motivation that the team has always supplied as justification for these major outlays. Team president Stan Kasten (formerly a bit more of a budget hawk, when he served the Braves teams of the 1990s in the same role) has said more than once that the Dodgers should compete for the right to go to the World Series every year, and that they expect and need to win a World Series.

The mission of these Dodgers has been not to waste Clayton Kershaw, and along the way they’ve found a fistful of other players too good to waste—a core whose window they’ve already used their vast wealth to artificially prop open, when they re-signed Kenley Jansen, Justin Turner, and (non-core member) Rich Hill last winter. Last season, they finally broke through and reached the Fall Classic, and came within a game of winning it. (They came within a few outs, really, only the outs they needed and couldn’t get came in Game 2 and Game 5.)

To take their foot off the gas now would contradict that mission. The window created by the emergence of Turner, Jansen, and Yasiel Puig as complements to Kershaw, the window they extended by re-signing Turner and Jansen and pouring untold millions into the supporting cast, now seems more open than ever. In addition to those established guys, they now have a newer, younger core, in Corey Seager and Cody Bellinger, boosted by late-blooming breakout guys Chris Taylor and Austin Barnes.

Stanton can opt out of his mega-deal after the 2020 season, if he so chooses. The three seasons between now and then feel like the three during which the Dodgers need to get over the hump. As good as their farm system still is, and as strong a team as they have put together in the front office and the player development department, there’s no way to reasonably project that the next core will match the quality of Kershaw/Turner/Jansen/Seager/Bellinger. While the former trio is still producing something close to their peak value, and before the latter duo becomes hilariously expensive, the Dodgers have to get this right.

They need to keep showing up in the World Series over exactly that three-year window. Maybe Stanton won’t opt out, and maybe his body will break down or his strikeout rate will shoot up, and maybe he’ll be an albatross over those last seven seasons. In the meantime, though, he’s precisely what the Dodgers need. He’s an extraordinarily rare opportunity to make a team that already might be baseball’s best markedly better, and if all that’s standing between that team and Stanton is the burden adding him might cause for the scouting director and the check writers, they need to push that aside and pull the trigger.

There is, of course, a baseball argument against acquiring Stanton. The Dodgers were encouraged with the progress of Puig last season, but he’s still considered a rather expensive and rather volatile asset throughout the league, so the team would have to either keep him and shift Stanton to left field or take a discounted return on Puig. (Presumably, reuniting Don Mattingly and Puig in Miami is a non-starter.) Assuming Puig stays, adding Stanton means squeezing out Joc Pederson (in fact, it would likely mean sending Pederson to the Marlins).

As long as both Stanton and Puig are healthy (hardly something we should assume will happen often), Taylor and Andrew Toles (who emerged as a Taylor-like breakout guy in 2016 before shredding his knee this May) would have to share center field, with Taylor spelling Logan Forsythe at second base, too. It would create a roster crunch, at the very least. But that doesn’t mean it wouldn’t make the Dodgers better.

It would just make them even more aggressively postmodern in the way they define and assign roles. It would also give them the most lethal lineup in the league, whereas (granting good health to all parties involved) they probably have only the third-best right now, trailing both the Cubs and the Nationals. If the Dodgers’ owners were willing to pay nine figures’ worth of dead money to get Gonzalez in 2012, and willing to re-sign Hill even as the injury-fraught multi-year deals of Brandon McCarthy and Scott Kazmir lay on their books in 2017, that swift move to the front of the pack should be well worth whatever financial pain it will cause.

You need to be logged in to comment. Login or Subscribe
jssharo
Gotta disagree, Matthew. Their team is plenty good enough to get into the playoffs without Stanton. And just because they spent like drunk sailors on the Crawford trade a few years ago does not mean that they no longer have the right to fiscal prudence. I suspect that they are best served by letting things reset and keeping their powder dry, because they might just have to spend big to retain Clayton Kershaw if he opts out of his contract after 2018.
Reply to jssharo
jfranco77
This is the Chapman trade (Cubs version) writ large. We have a class of teams in baseball that are pretty much locks to be in the playoffs. Is that good enough for them? The Cubs were in that class in 2016, but went and got Chapman anyway because 108 years of drought was too much. On the 30th anniversary of their last title, can the Dodgers say the same about their drought?
Reply to jfranco77
Andrew Bailey
Seems like a case of "eh, we're good enough already," which I guess is accurate. But that sort of takes the fun out of everything, right?

Not only are the Dodgers in a financial position to add Stanton, but it would seem they could get it done pretty easily given their prospect ammunition. I've seen Heliot Ramos' name pop up. But the Dodgers seem to have, like, five Heliot Ramoses in Verdugo, Kendall, Diaz, Heredia, Peters. If you're adding Stanton, and given they're getting back Toles and have plenty of other outfield options, it just seems feasible that the Dodgers could pay more in talent than either the Giants or Cardinals and not really miss much. As you state, isn't that sort of the point of investing heavily into scouting and development? To churn out talent that you can either deploy for yourself or leverage in trade?
Reply to Andrew
ogc
From what I’ve read, former owner had team in red $50M so they want to get back to break even. Stanton is easiest to reach this goal, especially if they are dumping another big contract in the same trade, by tying the two together, say, Stanton and Gordon, as rumored as the Giants deal.

I can go either way on the Giants getting him, lots of pluses and minuses, but fear that Dodgers are like eBay sniper, let the other teams give their best shot (and probably told Miami that) and then put together something that beats best offer of others, as they have so much young talent to offer, while also taking on the big contract. And I agree that some desperation has to be setting in after 30 years, plus this is Kershaw’s prime.
Reply to ogcgiants