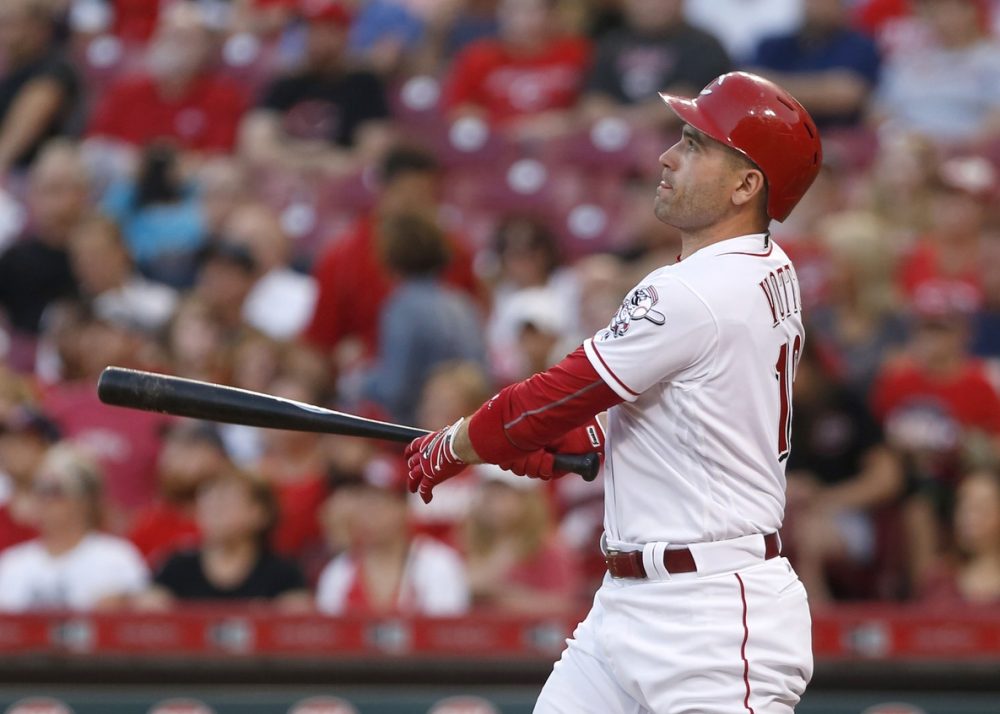 To comb through the pitches Joey Votto saw in 2017 is to reevaluate how much can be done on purpose in half a second. After raising eyebrows with a swing-happy first couple weeks, Votto locked into an above-average zone-swing rate while chasing only 16.1 percent of the 1,377 pitches he saw that were deemed more likely to be called balls.

Those unmatched overall numbers are impressive enough, but the pitch-by-pitch logs are something else entirely. You start to spot patterns that you can’t be sure of, intention where it just doesn’t seem possible. Votto’s understanding of the zone’s contours is such that you worry it was burned into him through some inhumane method like forced repetitions of a modified Operation-style board game.

Whatever the cause, the effect was an absurd season in which the Cincinnati superstar’s extraordinarily low chase rate bested all MLB hitters. Meanwhile, he still swung at 72.1 percent of the pitches that had an 80 percent or better chance of being called strikes, according to BP’s Called Strike Probability–a metric taking matchup, handedness, count, and other zone-morphing factors into account.

It’s what we will use to walk through the shockingly organized world of split-second decisions that could expand our understanding of what plate discipline can mean.

Granted access to the family archives of the world’s most attractive person, don’t lie, you’d go straight for the awkward teens, searching for the ugly duckling stage. Naturally, the first foray into Votto’s log would look for the very worst pitch he chased.

Votto offered at a whopping three pitches all season that had a CS Prob of zero. They aren’t good pitches, but assuming you’ve watched any plate appearance involving, say, Adam Jones or Javier Baez, your eyes won’t find these egregious. One was a changeup from tunneling master Jon Lester that fooled him. Another was a Danny Farquhar changeup that, likewise, fooled him, but he managed to foul it away. Indeed, changeups were Votto’s greatest vice–if you can call it that.

The other zero-chance pitch he swung at was thrown by soft-tossing left-hander Tommy Milone on April 14. It was a fastball, on a 2-2 count in the fifth inning. He takes a flat-footed poke at it, half-heartedly fouling it off toward the third base dugout. It’s possible that the Brewers’ catcher would have been forced to one-hop it had Votto’s bat not intervened.

A-ha! A mistake! Votto is human. Or … maybe not. Turns out, when Votto struck out in the first inning, the 1-0 pitch was the least likely called strike he took all season, turning against him despite coming in with a 2.2 percent CS Prob. The 2-1 pitch was the second-least likely called strike of his season–3.1 percent. And the 3-2 pitch on which he was wrung up was the fifth-least likely, at 8.1 percent. In this case, his “mistake” was something more like an on-the-fly adjustment.

Like those YouTube videos where some piece of fruit is sliced into perfectly identical pieces with no apparent effort, Votto’s swing patterns make too much sense to be real.

Unsurprisingly, he chased less than 10 percent of near-certain balls. He swung at precisely half of the 86 borderline offerings. And the logic dribbles down even further, as he swung at 31.3 percent of those toss-up pitches with no strikes in the count, 44.8 percent with one strike, and 80 percent with two strikes. Further, he fouled off half of those two-strike swings. He didn’t take a single called strike three in this range all year.

Most hitters must find a balance between restraint and action that allows them to maximize their plate appearances. Votto–who can seemingly hit a line drive at will, who has posted excellent power seasons, and who maintains a solid contact rate–has as much wiggle room as anyone in the world. And he gives himself even more with his bat control.

I don’t know that we have any evidence to suggest that fouling pitches off can be separated into a skill apart from the straight-up contact skill. But watch how Votto sets up for a two-strike pitch in the ninth inning against T.J. McFarland, a lefty who theoretically has a better chance of deceiving him than the average pitcher.

Votto gets a sinker that threatens to land in his nitro zone before darting down and in. This is something he’s prepared for, even if he’s not prepared to crush it. It’s right around the median height of the pitches he chased in 2017. His swing betrays awareness of the temptation, shortening up just to get another pitch. This is a way Votto separates himself from other hitters who work a lot of deep counts. You can wait for your pitch, but sometimes a pitcher is going to get a strike he’d only get 35 percent of the time. Sometimes he’s going to bounce a curve that you thought was a knee-high heater.

Whether his frequent swings at surefire strikes enable him to spring into action to cover himself on these potential at-bat enders, or vice-versa, Votto’s mastery of the borderline feeds into everything else. Pitchers who just hit the black are, most likely, going to miss by a bit more the next time they fire, giving their frustrating opponent one of his much easier decisions. McFarland missed with a sinker down the middle two pitches later. Votto took him out of the park.

Jameson Taillon knows a different version of this frustration. The young Pirates righty who wields a sinker and a four-seamer in the mid-90s has been relatively successful against Votto, really. He’s held him to a .200/.429/.200 slash line thus far in 21 career plate appearances. Still, the way that .429 on-base percentage came to be is … well, very Votto.

On August 27, Votto worked an 11-pitch walk in the first inning, spitting on off-speed stuff and fouling off fastballs until Taillon attempted to get him to go after a sinker. Then in the third inning, in another 11-pitch duel, Taillon reversed course, using his curveball to steal two strikes before Votto watched all of his off-the-plate fastballs go by, eventually working another walk. In the fifth inning, it was only nine pitches to the same effect–two strikes without a swing, then three foul balls interspersed with enough balls to give him first base.

All told, Taillon threw Votto a total of 73 pitches in 2017–35 of which had less than a 50 percent chance of being called a strike. Votto swung at 25.7 percent of those. It was one of the best chase rates any pitcher mustered against him in a substantial sample. And for the trouble, Taillon got one measly swinging strike. No single pitcher squeezed more than three swinging chase strikes out of Votto all year.

Plate discipline is measured and followed because everything starts with the pitcher acting and everyone else reacting. Reactions are crucial. Taking a pitch in the dirt is spotting a pothole and casually navigating around it. Jumping on a hanging slider is getting your big idea to market faster than anyone else, but also as a complete package. These acts of discipline happen in how energy is directed, how it’s controlled, not how it’s contained. For all of our attention to it, we have a pesky habit of talking about plate discipline as a way hitters should slow down, or stop themselves.

Votto, who has said his goal is to be “unpitchable” or “indefensible,” did not coax a .400 on-base percentage out of a tough matchup by waiting around. His evolution offers a vivid example of discipline in motion. While RBI nuts and rabid Reds fans hoping to be blocked on Twitter by Cincinnati-area beat reporters were busy lamenting Votto’s “patience,” he was calibrating a state of readiness that might just be necessary to counter faster, swervier, better pitching.

He’s playing offense and defense simultaneously, and yes, he could be a model for other hitters. Maybe we won’t see anyone else develop an eye quite like Votto’s, but most of his approach stems from choices, not innate ability. It’s committing to punish (and discourage) fat pitches in any count. It’s choking up and crowding the plate to fend off undesirable two-strike strikeout bids. Perhaps Votto, as much as anyone, understands how short those crucial fractions of a second can be.

You need to be logged in to comment. Login or Subscribe
Mason Alexander
There have been better contemporary hitters (Pujols, Bonds, probably Cabrera), but there is no one who approaches hitting like Votto.
Reply to Mason
newsense
Are we sure about that? It would be interesting to see if anyone else comes close.
Reply to newsense
roarke
Votto has always been one of my favorite players. It is a shame that he's only gotten to play in a total of 9 playoff games in his career.
Reply to roarke