The How-To Guide for Spontaneous Affection

I’ve never understood how anyone gets out of a romantic comedy without a chipped tooth. Romantic comedies are predicated on keeping people who are obviously well-suited for one another apart for artificial reasons. The third act often features a scene when the two leads will fight (because they love each other), then pause (again, love) before each rushes in to kiss passionately (they’ve realized they love each other). This is almost always preceded by the discovery of a work conflict/undisclosed ex/poor voting record. You know, the stuff people fight over. It is a well-staged moment. Mouths are cocked at the right angle; the leads’ hair is out of the way. There is often wind and rain, but it is blowing the opposite direction. Their lips collide and the world falls away, and no one knocks heads. Romantic comedies tell us all sorts of things about how we ought to feel and find love, but this is the least achievable. Coordinated, understood, without dental work clanking. It is the part of a romantic comedy that reminds me the most of professional sports. It’s so precise, so mechanically refined by small summer victories. Imagine the body control required!

That’s why I like the final out of the World Series. The final out of a no-hitter, or the moment after a walk-off, will do in a pinch, but it doesn’t quite compare to that last out before you’re named a champion.

Suddenly, these are just folks. Jose Altuve and Carlos Correa don’t know how to hug exactly. The facade has fallen away. They could have practiced. They could have coordinated. But they just felt it. They let the difference in height and speed take over. Why feel your best moment any differently? This is how the perpetual bridesmaid, the best friend with frumpy glasses, the girl with the ponytail, this is how she meets love. A bit awkward. A bit too much. A bit out of synch. But always full of feeling. All the way in, big hugs, chipped tooth and all.

Joking About the Truth

The truth is something that we all deal with on a daily basis, as we either seek it out or do our best to obscure it. In many instances, we stumble blindly onto the truth, not knowing we’ve done so until much later in life, if we come to that realization at all. In October of 1908, a small bookstore in Roseburg, Oregon did just that–unknowingly stumble onto a truth realized only with the passing of time. After receiving a shipment of over 500 new books, they placed this ad in the local newspaper:

At the time, this was likely considered a fine use of quotation marks to denote the hilarity of the books in question. But with the passage of a century and the advent of the Style Guide, we know differently and can judge it according to these new standards. But here’s the thing, the quotation marks are far more accurate now than they were in 1909.

Sportswriters in this era were eager to label individual players, teams, and games the “biggest joke of the year,” and there seemed to be a points system based on hyperbole. Out of this trend emerged some of the most biting baseball analysis in existence, and nobody was safe from the typewriter’s satire. For instance, the Buffalo Evening News published in 1903 this game recap: 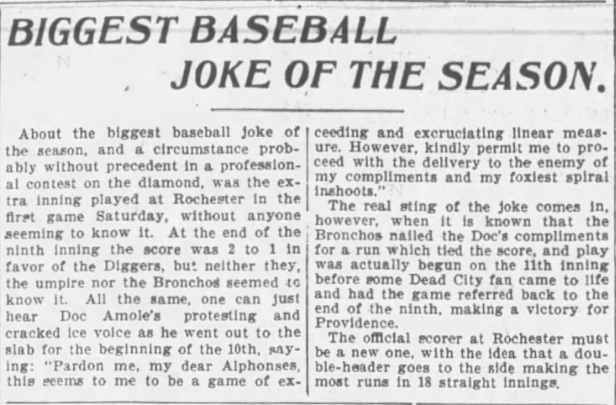 In a year that housed an 18-error game and a pitcher who lost two complete game doubleheaders, a clerical error by an amateur umpire in an amateur game is barely newsworthy, let alone the “biggest joke” of the year. But many people probably left the game with the same thoughts as the author of the article, no doubt believing them to be true, and lacking context, accepted the title as presented them.

Truth, then, becomes something mutable with time, something should be objective but is not. For the people writing the ad, it was the truth, and for us reading it today, it is the truth, but the truths are vastly different, almost antithetical. Even in the most objective truths, there are nuances, and life, as well as the game of baseball, is about searching for these nuances and evaluating them to craft something of an ad that endures the passage of time. Even if, as in this case, we remember something precisely for failing to be as memorable as it believed.

You need to be logged in to comment. Login or Subscribe
jfranco77
Doc Amole? Doc Amole??? Imagine the avocado toast jokes if that guy played today.
Reply to jfranco77
tearecrules
Carlos Correa was going in for the usual high-5 routine he and Altuve do when the Astros win. Altuve wanted a jubilant hug.

We should all be lucky enough to have an Altuve-Joy hug once in our lives.
Reply to tearecrules