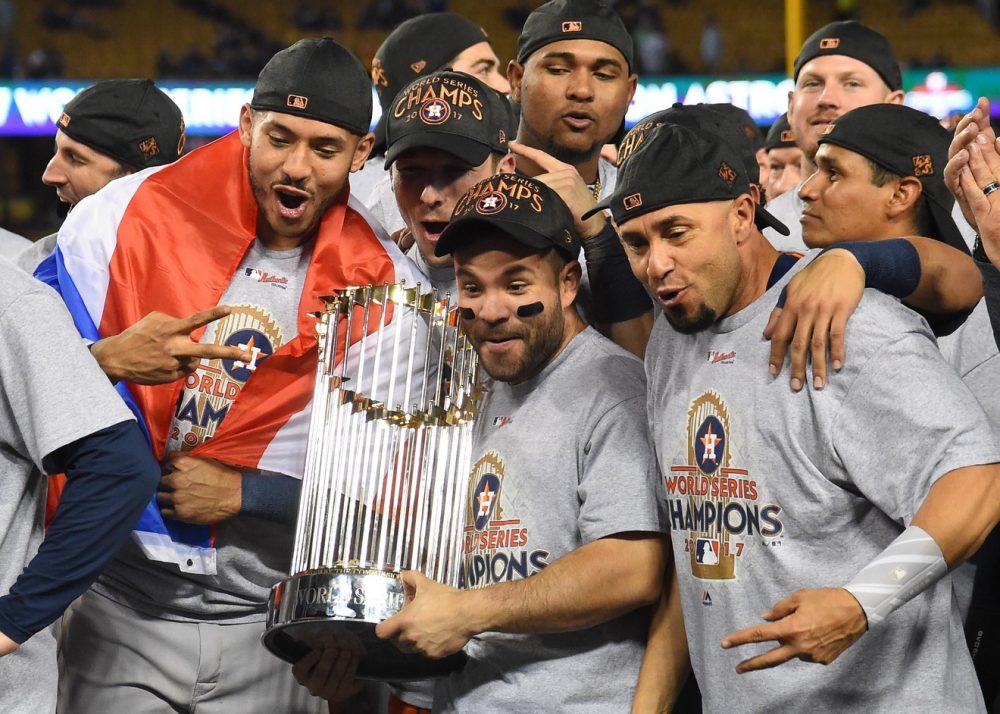 After six hard-fought games between the Dodgers and the Astros, it came down to a Game 7. For the third time in four years, the Fall Classic had made it to winner-take-all (or loser-goes-home, no-tomorrow, and every other cliche people say) game. This Game 7 was a little different, though. This World Series, by all accounts, was one of the more exciting in recent memory, with close games, lots of home runs, and unconventional pitching decisions. So naturally baseball fans were hoping that Game 7 would be another exciting, close contest.

Unfortunately, wishes don’t always come true and hopes get crushed like a bug under a boot. This game was over in the first inning. And I know people will read this and think, “How could you say that?” But if you’ve watched enough baseball you can tell when a team looks beaten and the Dodgers looked like a beaten team when the top half of the first inning ended.

It began when Yu Darvish, who was looking to rebound from his abysmal and abbreviated performance in Game 3, gave up a leadoff double to George Springer. It was off an 83.8 mph slider right in the middle of the plate that Springer didn’t miss.

Of course, there’s no shame in giving up a double to George Springer—he’s an excellent player and he had an incredible series. But something felt off. Even after one batter.

The next batter, Alex Bregman, hit Darvish’s first pitch toward the hole between first and second base. Cody Bellinger got to it but overthrew the ball to Darvish, who was covering first base. The Astros got their first run.

It was 1-0 Astros after only four pitches. And while a 1-0 lead is not big by any stretch, especially in the first inning and especially after how this series has unfolded, something felt off.

With Jose Altuve at the plate, Bregman stole third base and then scored when Altuve grounded out to first. Now it was 2-0. Again, not a big lead and certainly not insurmountable, but something felt off. Or, I guess you could say, something felt inevitable. And it wasn’t good for the Dodgers.

Darvish got Carlos Correa to ground out for the second out and then he went to battle with Yulieski Gurriel. Gurriel tipped his helmet toward Darvish while vituperous boos rained down from the crowd. They then engaged in a 13-pitch at-bat that Darvish ultimately won when Gurriel flied out to Yasiel Puig.

In the bottom of the first, Chris Taylor hit a leadoff double off Lance McCullers and set a Dodgers playoff record by reaching base 27 times. It was an 87.3 mph knuckle-curve that Taylor hit into the gap between right and center.

This was a theme for the Dodgers all night.

The second inning started off with a long plate appearance for Brian McCann that ended with a walk, and it didn’t get much better for Darvish. Marwin Gonzalez followed with a double advancing McCann to third. (He was winded and he struggled a bit, but he got there.) Dodgers fans, and others watching the game, were wondering why the Dodgers weren’t getting someone up in the bullpen because it looked like another game in which Darvish didn’t have it. And in a Game 7, you cannot hesitate because a 2-0 game can turn into a 6-0 or 7-0 in a blink of an eye.

Fortunately for Darvish and his manager Dave Roberts, Josh Reddick came up empty in his at-bat, grounding to first base. McCann, who typically runs like he has a piano strapped to his back, did not score on the play. It was the next batter, McCullers, who was the one to get McCann in after hitting a ground ball to second base. He also advanced Gonzalez to third.

Now at this point in the game, many people were wondering why Roberts wasn’t coming out of the dugout to grab Darvish, who stayed in to face Springer for a second time. That decision didn’t work out well for the Dodgers. Darvish threw a 95.8 mph four-seamer on 3-2 that was right in the heart of the plate and Springer hit it into the left-center field seats.

It put the Astros up 5-0 and essentially killed the Dodgers dream of a World Series title.

Everything else in the game is incidental. Sure, Clayton Kershaw came in and pitched four scoreless innings, and McCullers had to be taken out because he couldn’t stop hitting people with pitches. Oh, and Kenley Jansen came into the game in the seventh inning. He walked a batter, struck out a batter, and Taylor saved him from surrendering an extra-base hit to Springer.

The Astros also flashed some leather in the bottom of the second and kept the Dodgers from scoring.

The Dodgers would strand 10 runners in the game and finish 1-for-13 with runners in scoring position. Their one hit with a runner in scoring position came in the sixth inning off the bat of Andre Ethier, who hit a 97.7 mph fastball from Charlie Morton past a diving Jose Altuve to score Joc Pederson for the Dodgers’ only run of the game.

After that, the Dodgers went down in order in the seventh, eighth, and ninth innings. Here’s the final out. Seager gets to be an answer to a trivia question, but not in a good way; Morton does.

Houston won their first World Series after 55 years in existence, which is amazing when you think about some of the great players who have been on the Astros—Nolan Ryan, Jeff Bagwell, Craig Biggio, and many more. They got close in 2005, but lost to the White Sox. But hey, we all knew it was going to happen, right? Sports Illustrated said so in 2014. 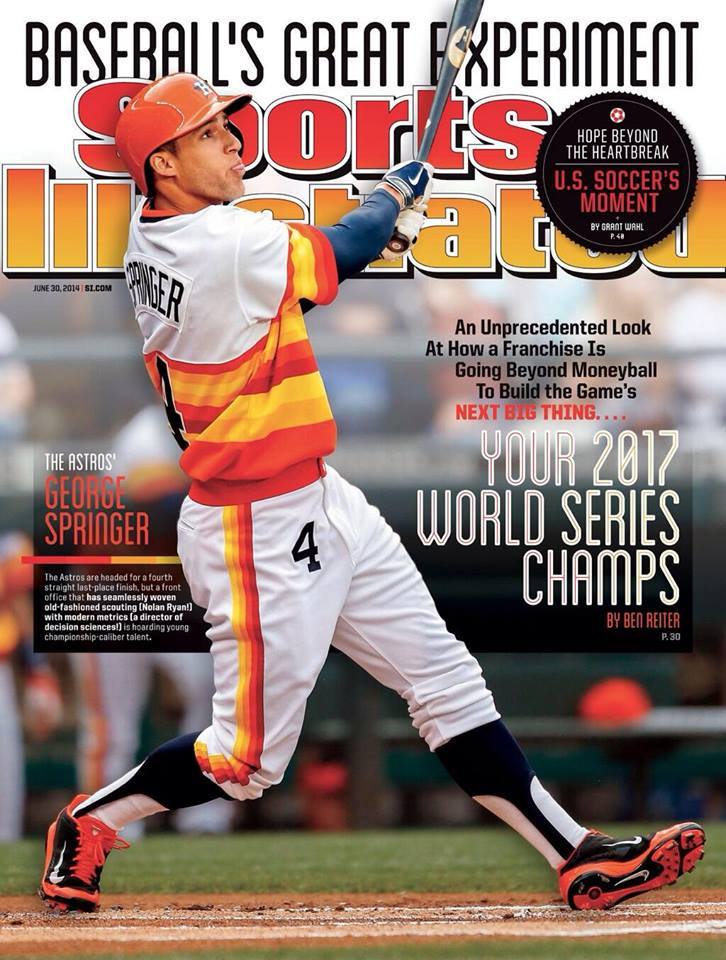 George Springer, who was drafted by the Astros in 2011, won the World Series MVP and deservedly so. He hit five home runs in the series and he will haunt the Dodgers’ dreams all winter.

None of the players on the Astros’ playoff roster had won a ring before Wednesday night. All 26 players are first-time champions. One of those guys is Carlos Beltran, who after 20 years in the league and after seven different trips to the playoffs is finally a champion. If this is his last season, and it looks like it could be, what a way to go out.

Another one of those guys is 23-year-old shortstop Carlos Correa, who hatched a plan before the biggest game of his life. He was going to propose to his girlfriend if the Astros won. He told his teammates and his coaches what he was going to do. Right as he finished his postgame interview with Ken Rosenthal, he walked over to his girlfriend, who was on the field but behind a barricade, dropped to one knee and asked her to marry him.

I’ll admit, I’m not usually a fan of ballpark proposals, but that one was pretty nice.

And in perhaps the most surprising news of the night, everyone found out that first-time World Series champion Brian McCann and his former Yankees teammate Mark Teixeira are going to become stepbrothers this winter. That’s right, Teixeira’s mom and McCann’s dad are getting married.

I guess the cat is out of the bag. Congrats step-brother! #WorldSeriesGame7 @astros https://t.co/2JfX1Lr0dI

If someone doesn’t put them in a Stepbrothers-themed video …

So congratulations to the Houston Astros on their first World Series title. Enjoy the celebration and the hangover. And don’t forget, pitchers and catchers report in 103 days.

You need to be logged in to comment. Login or Subscribe
tearecrules
No clue why Forsyth didn't go home on that McCuller's grounder. Or why they didn't have the infield in for an AL pitcher batting. McCann is slower than me (no exaggeration) and was halfway down the line at 3rd when Forsyth fields the ball. Maybe McCann beats the throw, but make him try. Heck, even if he doesn't get McCann 1st and 3rd with one out and Springer batting probably gets Roberts out there to pull Darvish.
Reply to tearecrules