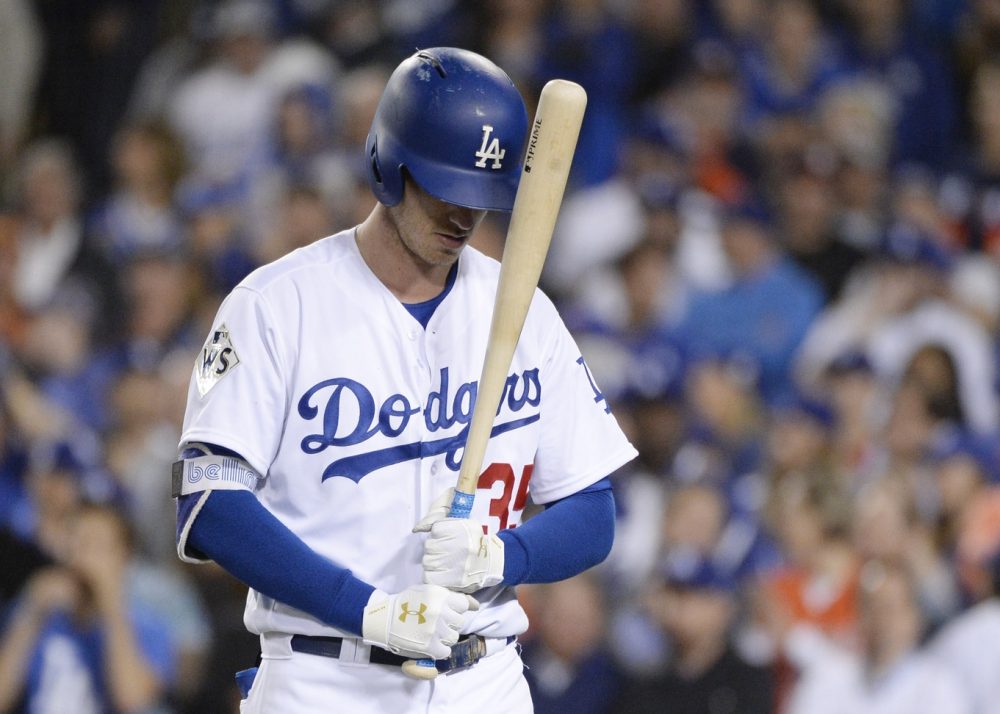 We’re sometimes bad at knowing when we’re dying. Relationships, careers, protracted military conflicts, bad proms. We witness and live and endure deaths big and small all the time, absorbing them into our histories until the end become more permanent. Of course, there is an eventual literal death, but there’s also the moment when our perishing is certain. It often comes before, earlier. It might be the moment you blow through a red light, or when a stranger coughs in an elevator. Maybe it was the day your best friend told the school your secrets. Your fate was sealed, but you didn’t know it yet. You died later, and that day.

On Wednesday night, the Dodgers lost the World Series. They squandered runners in scoring position and four good innings from Clayton Kershaw. Lance McCullers notched an RBI and George Springer hit a two-run home run in the second inning. They played nine innings, but they needn’t have. The Astros put two runs on the board in the first; the Dodgers lost in the bottom of the inning. Everything after was a spectre. This is how the death of their season unfolded, over six batters.

This is fine. This is good! Sure, Yu Darvish got hit hard in the top of the inning. And yeah, Cody Bellinger’s error allowed a run to score. Alex Bregman stole a base. Jose Altuve brought him home. The Astros got a couple. But Chris Taylor just doubled. You’re going to get those runs right back. You’re confident. You’re celebrating with Charlie Culberson. Charlie Culberson! No offense to Charlie, but whatever mojo he’s brought this postseason, he’s a bench player; he brings bench player mojo. That’s B-grade stuff. It’s not panic mojo! It’s first-inning mojo. It’s fine. Things are fine! Things are good, even.

We never care quite so much about other people’s baseball as we do in the World Series. Writers and analysts aside, fans spend most of their time watching their team, and caring about their team, and rooting for their team. Other teams are supporting players in our boys’ dramas. It isn’t until the postseason that we become invested in those in whom we were previously uninterested. It can feel a bit funny.

Sabermetrics as a discipline is interested in, among other things, parsing credit and blame. We’ve developed statistics that endeavor to isolate pitching from defense, and bad hitting from bad luck. We record outs on balls in play, but mentally credit batters with exit velocity when the ball is hit hard. With this more exact accounting comes a skepticism of charity; a sense that outcomes that are unearned are somehow cheaper. That’s fine. You want clean books.

But sometimes you just need a baserunner. You’re down two runs. The run expectancy with runners on first and second with one out is 0.9448; it drops to 0.4553 with two out. If Lance McCullers can’t control his fastball and plunks Justin Turner, well alright; you’ll get a bit messy. Taking one in the arm is work of a kind, I suppose.

Bellinger ended the evening with a -.118 WPA. The Baseball Gauge had his Championship Win Probably Added at -0.133. Both were team worsts, non-Darvish division. Cody is a young guy, a famously young guy, even. He’ll adjust his approach. He’ll probably have other World Series. He might even help his team win one. But on this night, he just couldn’t leave that curveball alone, when a single would have done it.

It’s rude to scrutinize presents too closely. What’s that old expression? Don’t look a gift horse in the mouth? Sure, the horse might be literally long in the tooth. It might be an old-ass horse. But it was a gift. That old-ass horse was free, alright? Show some gratitude. Except, if McCullers is going to hand you a free baserunner, does he have to do it with two out and a left-handed hitter on deck? It’s not that you don’t appreciate it. It’s just that you’re pretty sure you’re going to stuff your new present under your bed until your parents make you take it out and pose for exactly one picture with it.

Yup, a pretty crummy little gift you got there. And you’re wounded. Unto death.

It happens all the time. Your cavalry gets lost on the first day of a battle; someone asks your crush to the dance before you do. Your starter can’t get out of the fifth inning two games ago; cancer metastasizes and spreads. You’re toast, caput, a goner. You’re only now calling the thing, but that’s just because you didn’t realize that the real moment of your defeat was hours ago.

I remember sitting behind a stranger at a game that got out of hand once. I don’t remember the inning or the score, but it was a blowout, and an early one. This gentleman pulled out his phone, and Googled, “mercy rule baseball mlb.” I remember thinking that the cruelest thing about the game writ large was how it forces people to keep failing publicly in small ways for a long time, right after they fail in big ways for a short time. It doesn’t let up or show grace.

But I think I was wrong. The cruelest part of the game doesn’t come in the blowouts; it comes in the closeness. It comes when there is still a bit of reasonable hope. It comes in the finality not of a blunt force, but in a slow bleed. That was the fate that met the Dodgers on Wednesday night. They were dead all the way back in the first inning, but they wouldn’t realize it for another 24 outs.

You need to be logged in to comment. Login or Subscribe
tearecrules
Corey Seager and Cody Bellinger should be looking through their contact lists to find whomever they know who can throw a curveball at the knees. They should then spend the entire offseason learning how to do something with that pitch. The Dodgers lost because those two cannot hit a low, inside breaking ball, can't lay off them, and the Astros had about 6 pitchers who could put a ball in that spot almost at will.
Reply to tearecrules
Noel Steere
Can Didi Gregorious tag along?
This would seem to be something the Astros' crack analytical and scouting team might have highlighted as something to exploit against the Yankees and Dodgers. I hear those guys are pretty good!
Reply to Noel
Noel Steere
Ugh. Please keep carriage returns in comments. Make BP Readable Again!
Reply to Noel
tearecrules
I second the spacing request. What the heck is it with website comments not recognizing line breaks?
Reply to tearecrules
jfranco77
McCullers basically LOOGY'd that first inning after Taylor. He had that back foot curve working against lefties but had nothing against righties (except drilling them). It just seems weird because he's a righty.
Reply to jfranco77