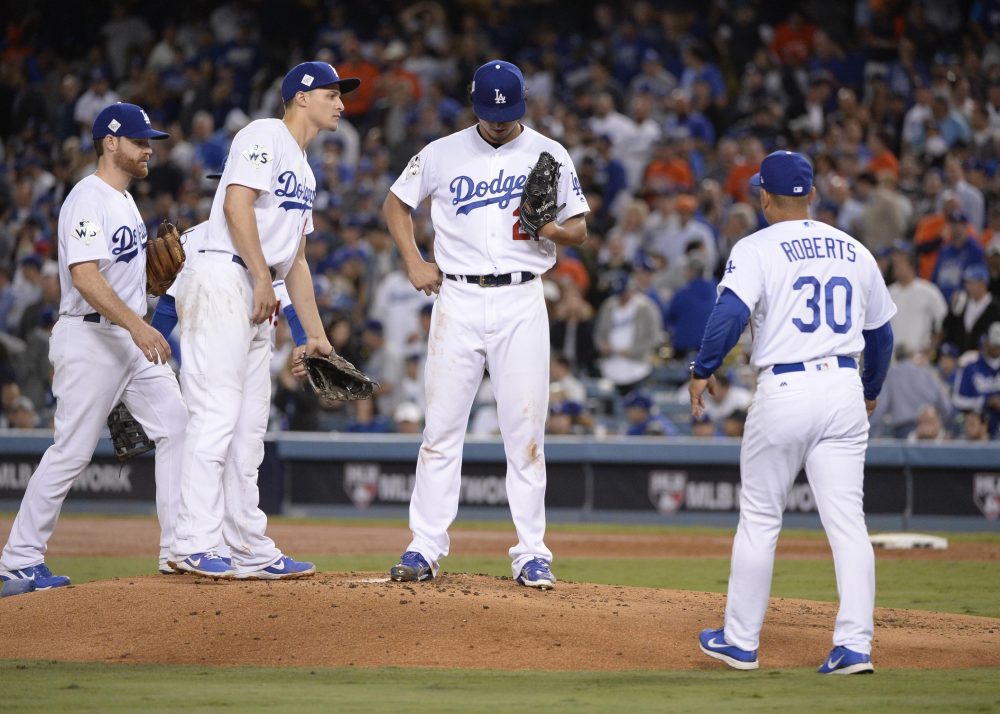 It wasn’t Yu Darvish’s fault that the first inning went as badly as it did. Darvish gave up George Springer’s leadoff double, but then he got a ground ball to the right side from Alex Bregman. It was a fine piece of conservative hitting by Bregman, who saw a Los Angeles infield swung around somewhat toward the left side and knew that even if he couldn’t poke the ball through it, he would move up Springer.

Still, it was a ground ball to the right side, and Cody Bellinger was able to field it cleanly. Bellinger was much closer to second base than to first base, and the spinning, submarine-style throw he had to make was much longer than those to which any first baseman is accustomed. That that throw went wild, however, is no fault of Darvish.

Maybe Darvish could then have held Bregman closer at second base, but Bregman’s tenacity of purpose throughout the World Series was too great to be easily contained. He picked a good pitch on which to attempt a steal; the ball was in the dirt and Austin Barnes had no play.

Jose Altuve’s RBI groundout was another piece of fine situational hitting, but (as Bregman’s should have been, perhaps) it was an out. Then Darvish faced down the man who victimized him (in more ways than one) in Game 3, retiring Yulieski Gurriel after a very long battle. He got his inning and his moment in.

That was Dave Roberts’ chance. Things could have been a whole lot better (of course they could have), but they could have been much worse, too. Darvish clearly didn’t have much on Wednesday night, and Roberts had both Clayton Kershaw and Alex Wood lurking in his bullpen. Kershaw stirred in the bullpen throughout the first inning, and the Dodgers put together a protracted (though ultimately fruitless) rally in the bottom of the frame.

If Roberts had gotten someone else out to the mound in the top of the second inning, the Dodgers might have had a longer window within which to apply real pressure to A.J. Hinch and his burdened pitching staff. Instead, he tried to get another inning from Darvish.

That’s understandable. The Astros’ lineup had two of its three left-handed bats coming up to open the frame, and Darvish might have felt like a better bet against them than Kenta Maeda or Brandon Morrow would have. The thing to do, of course, with two trusted left-handed starters on the night’s agenda, was to either get one of them in right away or La Russa the second inning (Tony Watson-Ross Stripling-Tony Cingrani, perhaps) and have Wood or Kershaw start their night’s work in the third.

Both Hinch and Roberts made some savvy moves the rest of the way. Hinch got Lance McCullers out of there at the right time, aggressively deployed Chris Devenski, and then trusted Charlie Morton with the final 12 outs. Roberts, in a gambit that would be remembered as an all-time World Series masterstroke if his team had only made it matter, pushed Devenski out of the game by ordering back-to-back intentional walks in the sixth inning.

With a runner on third base and two outs, Marwin Gonzalez was due up. Intentionally passing him to get to Josh Reddick (over whom Kershaw had the platoon advantage, and who struggled throughout the postseason) seemed like a no-brainer. Hinch tried to make that decision sting, though, lining up consecutive right-handed pinch-hitters: Evan Gattis for Reddick, then Cameron Maybin if Gattis could extend the inning.

Roberts saw that as an opportunity. He ordered Gattis walked, too. It was a risky move, and one that burned him badly just over a year ago. Remember, Roberts intentionally walked both Jason Heyward and Chris Coghlan in Game 1 of the 2016 NLCS against the Cubs, nudging Aroldis Chapman out of the game, but then watched Joe Blanton give up a grand slam to Miguel Montero.

Undeterred, Roberts decided the situation demanded that he roll the same pair of dice, and this time, it worked. Devenski was out, and the score remained the same. Roberts’ hitters just couldn’t make enough of their opportunity.

That move showed how badly Roberts wanted to give his team their breath back. They just never found it. The Astros kept the pressure on: they played great defense, ran the bases aggressively, and took advantage of the creeping pressure the trailing Dodgers felt at the plate. Ultimately, the Dodgers’ inability to capitalize on their early chances and Roberts’ failure to lift Darvish proactively made Game 7 unwinnable for Los Angeles.

Honestly, for all the talk during the WS about how the Astros hitters struggled in a couple games, the failure of any Dodger not named "Joc" to do anything with the bat is what doomed them. Lots of baserunners, very little useful contact.
Reply to tearecrules