I live the blessed and fortunate lifestyle of a person who has both severe anxiety and severe ADHD. Which, I guess, is why baseball is my preferred sport. As opposed to something like hockey, where it seems you have to be in horror on the edge of your seat for every second of the game lest you miss something vital, baseball allows for more in-between moments. There’s more time to take a breath and collect yourself, to indulge your fidgety impulses, to get up and take a stress walk. The rhythm of baseball allows me to, occasionally, be distracted or disengaged.

Of course, baseball’s pace also allows for more time to truly feel the terror inherent in each moment. It’s easy for your emotions to run away from you. And so, to ground myself, I spend most of every baseball game knitting. No matter what’s happening in the game, no matter how stressful or absurd the happenings are, I try to ground myself in the repetitive motions of the needles, the feel of the yarn. The gentle physicality of knitting both calms me down and makes me more present in the game. My favorite pieces of postseason baseball knitting are simple projects that I can do without looking. Like this hat, which I started at the beginning of Game Four, and finished in the seventh inning of Game Six. 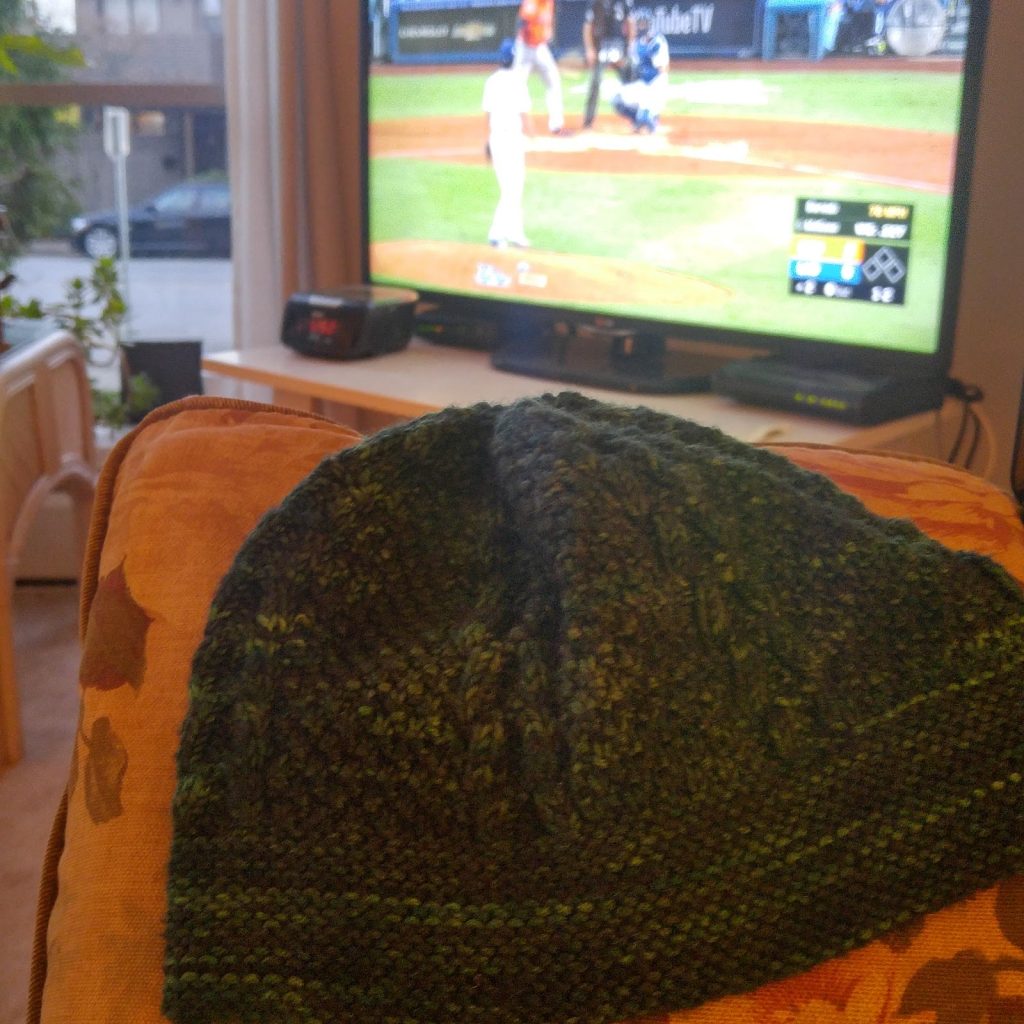 Or this sweater, that I started way back in the third inning of the AL Wild Card game, and which, as Game Seven plays itself out, I am beginning to embroider rainbows on. 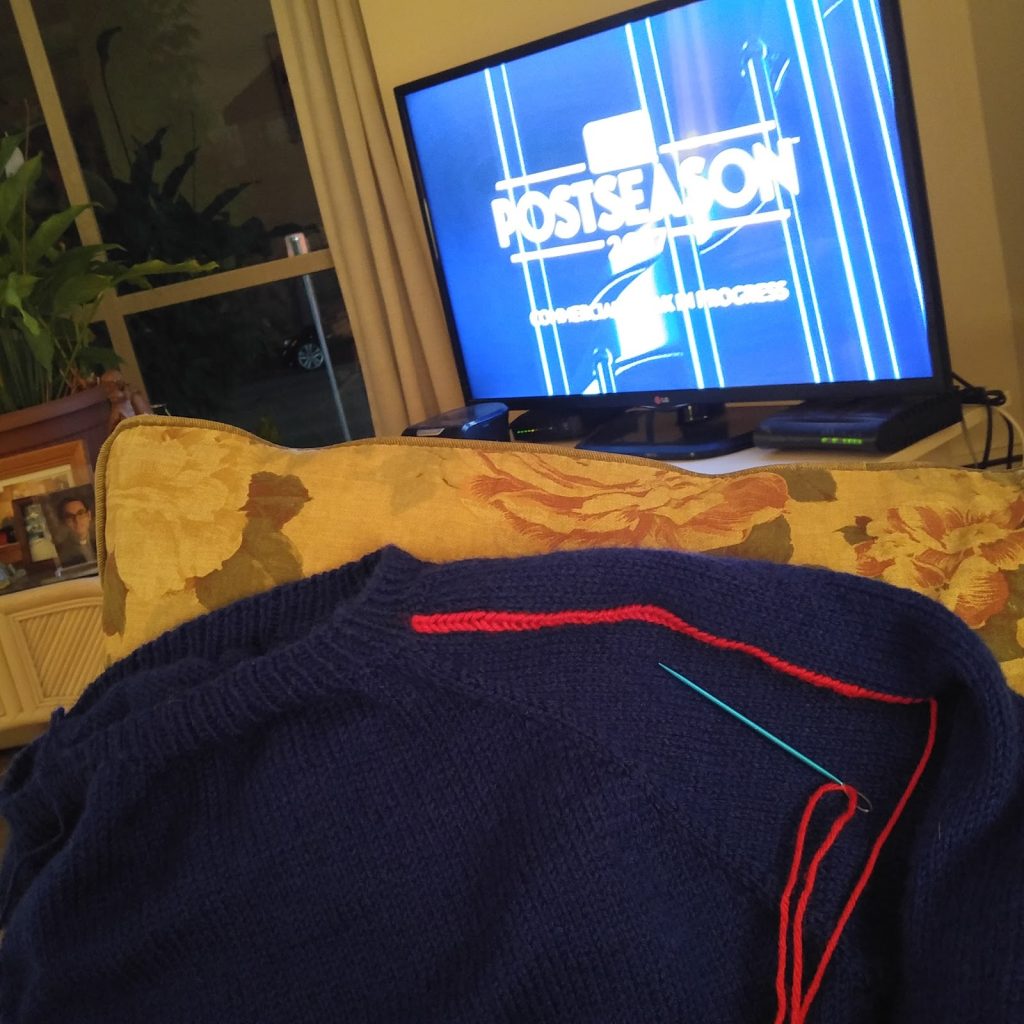 The worst thing about the postseason is how ephemeral it makes baseball feel— how quickly the year of baseball that you have invested so much time and energy and emotion into can evaporate into an apparently wasted effort. Even if your team gave you the most joyful regular season you can remember, an unsuccessful postseason renders those feelings immaterial. Over the offseason, even the memories of the postseason winners fade, returning us to a state where it might as well not have happened at all. It’s a blessing, or else this might be hard to handle. It still feels a little sad.

So I sit here, nervously knitting, my entire body invested in the outcome of this game. In six months, this feeling will be gone. But my knitting will be here. My investment in these teams, the specific physical memories of watching the 2017 postseason, are woven into each stitch of this hat and this sweater—a few small pieces of permanence.

LOS ANGELES, CA – The mood of the hotel bar at the Holiday Inn Los Angeles – LAX Airport was jovial as star second baseman Jose Altuve scooped up Corey Seager’s ground ball and heaved it to first. A dozen pairs of eyes stared at the overhead CRT television in anticipation before bursting into cheers.

“I can’t believe it,” third baseman Matt Dominguez cried as a teammate poured Bud Light over his head. “All this hard work we did, it all paid off.”

Members of the 2012 and 2013 Astros, whose teams combined for a record of 106–218, assembled at the hotel airport to cheer on their former teammates and acquaintances, including the same men who had taken their jobs.

“Dark times, man, dark times,” said Chris Johnson, who spent 2017 in Triple-A Norfolk. “Every day I wanted to quit… actually, every day I wanted everyone else to quit. I think I actually did quit once. But they kept telling us to go out there, do everything we could, that we were part of something special.”

Travis Blackley, who Skyped in from his home in Australia, gave what appeared to be an impassioned speech, but the audio connection wasn’t strong enough over the hotel wifi to be audible. Only Erik Bedard, who sat silently in the corner sipping an Angry Orchard cider, seemed uninterested, instead muttering something about factories.

“No, I don’t really expect [a ring],” former right fielder Brian Bogusevic explained. “I know they’ve got to give ‘em out to like coaches and scouts and assistant controllers and stuff. Those rings have diamonds in them, huh? They must cost hundreds of thousands of dollars. No, I was just hoping they’d like send us some coupons to get World Series gear at Target or something. That’d be pretty sweet, right? People might ask, ‘Were you on the Astros?’ and I could say, yeah.”

The party continued for approximately 45 minutes before hotel employees dispersed the Astros to their rooms per corporate policy.