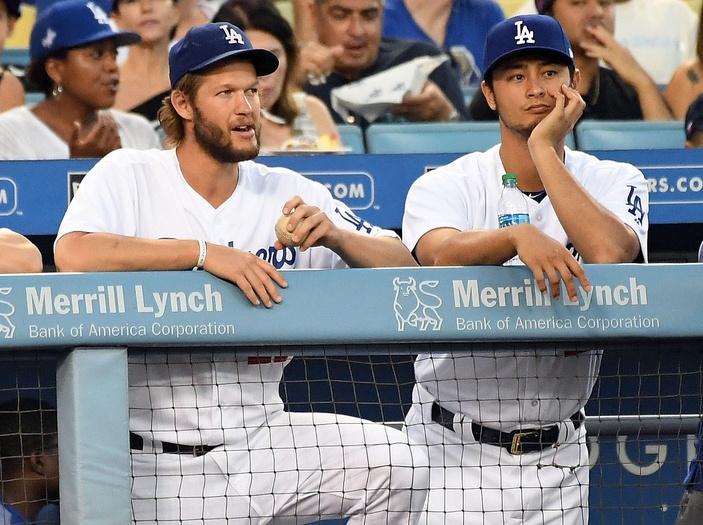 Ooooooh baby. A great baseball season leading to a great World Series matchup between two powerful, deep, star-studded 100-win teams will end with Game 7. What more could we ask for? This has already been one of the best, wildest, and most competitive World Series of all time, and tonight has a chance to take it into legendary status.

Fittingly, in a series (and postseason) filled with managers churning through bullpens and using entire pitching staffs in unconventional ways, Game 7 figures to be more about the relievers (or “relievers”) than the starters. Lance McCullers and Yu Darvish will start, but in this case it truly just means they’ll be taking the mound first for each team. Both right-handers are certainly capable of shutting down a lineup for six or seven innings, but A.J. Hinch and Dave Roberts will have them on the shortest of leashes knowing that there are even bigger guns available out of the bullpen.

For the Dodgers, that means Clayton Kershaw and Alex Wood, both of whom were in the mix to appear late in Game 6 but ultimately weren’t needed. Kenley Jansen shut down Houston for two innings despite Roberts telling reporters before the game that the All-Star closer would only be available for three outs. Purely from a workload standpoint you might think Jensen would be available for only three outs again tonight, but … well, if the Dodgers need six outs to win the World Series those plans will probably change.

McCullers has made a big impact as a starter and as a reliever this postseason, pitching twice in each role while compiling a 2.95 ERA in 18 1/3 innings overall. Tonight he’ll likely be asked to get through the Dodgers’ lineup twice before turning things over to a bullpen that includes starters Dallas Keuchel, Charlie Morton, Brad Peacock, and perhaps even Justin Verlander on zero days’ rest. Hinch has lost all trust in closer Ken Giles and his faith in setup man Chris Devenski is also diminished, so it could be another instance of the Astros going with the tandem-starter plan.

Perhaps it was just postgame bravado and adreneline, but moments after the final out last night Verlander told reporters that he could be available in Game 7 depending on how he felt playing catch this afternoon. He threw 93 pitches in taking the loss last night, and his previous bullpen work this postseason didn’t go very well, but if Verlander were to tell Hinch that he’s good to go for, say, three outs tonight it might be tempting for the manager to take him up on the offer. Houston’s normal bullpen options should all be rested, but Hinch’s usage has been more about trust than workloads for a while now.

Roberts has ridden Brandon Morrow extremely hard, using him in each of the first six games despite a career filled with injuries. Morrow imploded in Game 5, but then bounced back with a scoreless inning in Game 6. Presumably he won’t be one of the Dodgers’ primary bullpen options tonight, but Roberts has already worked him more than anyone could have guessed, and it’s not as if Kenley Jansen, Kenta Maeda and Tony Watson have been underused.

Because both teams have a Cy Young-winning left-hander looming as their bullpen hammer, and might bring them in very early, it’s possible we’ll see something other than the standard lineups versus right-handers that both managers have used throughout the playoffs. That would have been a bigger factor for the Astros had they not already bumped a slumping Josh Reddick down in the order, but Alex Bregman is the no. 2 hitter now no matter what.

Not having the designated hitter spot to play around with also removes some of the more creative options. Still, if both managers know that their lineup will be facing Kershaw and Keuchel rather than Darvish and McCullers by the second or third time through the order, that could change things. If nothing else, this game is ripe for pinch-hitting and double-switches, which of course makes it ripe for second-guessing and, if things go into extra innings, weirdness.

PECOTA sees the Dodgers as solid favorites (and Las Vegas agrees), but trying to project the pitching usage tonight is nearly impossible. Last time the Dodgers played a World Series Game 7 was October 14, 1965 in Minnesota. Sandy Koufax started on two days’ rest and shut out the Twins on 132 pitches. Here’s a screen shot of Koufax’s postgame interview with Vin Scully, who had been the Dodgers’ announcer for “only” 16 years at that point. 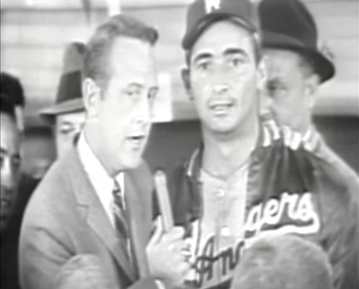 There’s a decent chance tonight’s starting pitchers will throw fewer than 132 pitches combined, but we may see as many as three former Cy Young winners pitch on two (or fewer) days’ rest. Both teams would probably like to get 5-6 solid innings from McCullers/Darvish and then just finish the game with Keuchel/Kershaw, but tonight may come down to which manager is forced to stray furthest from those idealized plans. Roberts having Jansen as a second hammer to drop could be the difference for Los Angeles, especially with Hinch losing faith in Giles.

These are two great, evenly matched teams playing a tremendous, drama-filled World Series and the only prediction that seems safe is that Game 7 will be a night everyone remembers for a long time.