On Being a Team Player

Sometimes at work we are asked to assume duties that are not part of our jobs, but need to be performed due to emergency or incompetence or being swept up in a coup attempt in a tiny island nation. And so we, the loyal workers, smile and agree to this and swallow down our varying amounts of resentment, because it is important to be a Team Player. Usually, however, the motivation for agreeing to these extra duties is not purely intrinsic, an overwhelming sense of The Right Thing To Do causing one to fall on the sword of an extra shift. More often, our donning the mantle of Team Player―our clenched-teeth “of course!”―is done with the hope of advancing our own careers, as well as the understanding that we are paying into a karmic pool that we will have the opportunity to draw from when it’s our turn to take a kid on a college tour or have elective surgery or flee to the Amalfi Coast because the feds are starting to sniff around. So it is the Right Thing to Do, but only inasmuch as it’s the right thing to do for your future, layabout self.

At times, however, this volunteerism can have intrinsic roots. Perhaps we are looking for a new challenge and want to prove we can do it (although that can quickly cross the bridge back to external motivation and the thirst for recognition). A more common example is when we are motivated by genuine care for a co-worker, especially one for whom we feel sympathy, in which case it becomes a relational transaction, human-to-human, with the business itself cut out. You want to help your co-worker, who is a person like yourself going through something you feel lucky not to be going through, and so you are willing to do what you can do to help, regardless of the side effect of helping the business that employs both of you.

Three of the Astros’ biggest stars are also its cheapest. The salaries of Lance McCullers, Alex Bregman, and Carlos Correa as a whole account for about a million and a half dollars, or about 1/10th of what the Mariners paid Yovani Gallardo to pitch to a negative WARP. Not one of McCullers, Bregman, and Correa cost the Astros more than $200k per win. This is, unfortunately, how baseball works, when you’re good at it: Take advantage of MLB’s minor leagues and develop young stars you don’t have to pay as stars, freeing up money to pay Brian McCann almost $11 million per win. It’s not a path that breeds worker loyalty, although it is a nice object lesson on late capitalism.

But watch as Carlos Correa becomes so overcome with joy for his co-workers that he takes on another job: baserunning coach.

Possessed by the spirit of freewheeling third-base coach Gary Pettis, Correa sprints from the dugout pinwheeling his arms and motioning for the slide from Derek Fisher, who spent most of this year in Triple-A. It’s a wholly unnecessary act, and yet a job Correa seizes reflexively, joyfully. Deep down, we all just want to be Team Players.

Game Five of this World Series finally delivered on the eternal beating heart of baseball: aggravation and resentment. Bill Miller’s strike zone drew ire near and far, even prompting reserved baseball tyro Corey Seager to come within a quarter-moment of slamming his bat in rage. That he did not illustrates the fundamental flaw of postseason play: Tension and the potential penalties for outward expressions of that tension (ejection? With only single-digit more opportunities to help your team take a trophy? Unthinkable) are simultaneously off the charts.

Miller has issued just three ejections in the calendar year, one of them more telling than the others. On March 26, he ejected Diamondbacks pitcher Robbie Ray for arguing balls and strikes.

Translating such intensity of feeling into a context in which expression of emotion is considered appropriate requires the mathematics applied to end-of-world scenarios. Let us not.

When I was in high school my bedroom was in the unfinished basement carpeted with dirty clothes, a futon flanking the daylight windows, a Power Macintosh glowing monitor blue in the other corner. I couldn’t hang posters because there was no drywall, so instead I hung Beckett Baseball Card Magazines from the wood frames in plastic sleeves. The room has since been repurposed for sewing and stationary biking, and there’s little evidence that it was ever mine; I was forced to take or give away my possessions years ago. Instead, book club mystery novels and tubs of rubber stamps define the decor. 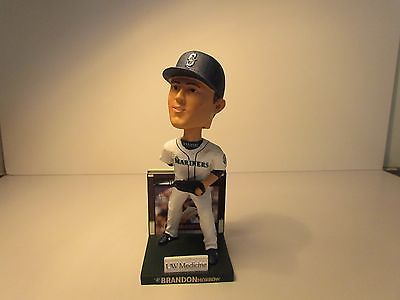 Until recently, there was one bond: a Brandon Morrow bobblehead, handed to me at some random baseball game in 2008 and stashed on a bookshelf as some sort of ironic flag. I’ve been familiar with Morrow a long time: watched him get picked ahead of Lincecum, get converted to reliever and rushed to the big leagues, drafted him numerous times as a sleeper and watched him lose a handle on his 20’s. The bobblehead just sat there, too valuable to throw away, too useless to bring to my real home, too bizarre not to be significant.

This spring, I finally took the bobblehead with me. I have a daughter indifferent to my love; a doll seemed the perfect bridge. She broke it almost immediately, both arms severed like a cut from a razor. I smiled at the irony, then threw the pieces away.

Weeks later, Morrow got called up by the Dodgers and began one of baseball’s wonderful and arbitrary redemptions. I rooted for him, not out of personal affection but the way you hope to see the final card of the straight flush turn up on the river: just to see it. It culminated here:

Ten years Brandon Morrow waited, 10 years I waited, for this moment, and it hung in the air like the skid of tires on a wet road. Every time I watch it on replay, that fastball slows down a little more: 95, it says, in an attempt to force me to abandon mathematics. Ninety-five. That pitch is not 95. It’s Chekhov’s gun. It’s an atari in the Japanese game go, the heavy cross of the boxer that throws him off-balance. It’s the accidental confession of the killer at the end of an episode of Matlock. It’s a father asking “orange who” in the middle of the 17th knock-knock joke.

I hate the playoffs for what they do to baseball, and what they do to baseball players: stretch them out, consume them, extract everything from them and slap their name on the product. The man who threw that pathetic fastball was the same man who managed 27 innings a year the past three years, the same who worked all but one game the entire playoffs. But it wasn’t Brandon Morrow, not the Brandon Morrow who sat in my parents’ basement. That man’s arms had already fallen off.